Link to the WCHCCRVgroup (Williamson County Historical CommissionCemetery Restation Volunteers) that maintains and restores our forgotten and abanded cemetery that needs help in our County.

Here's a detailed map made by the TXDOT

It doesn’t have a few of the more obscure cemeteries but is still a very clear map — you can zoom in to see more detail.

(Click here for a listing in HTML format and links)

Link to a listing index by the Texas Historical Commission

Write up on tombstones by Alan Rabe

We need help — some of our cemeteries have fallen into disrepair and we need help in keeping them clean and in good shape. Some need trees and shrubs cut down, some need the weeds mowed and fences mended. We have groups and people who are doing a wonderful job in helping our old cemeteries, but our cemeteries still need help. Again, a special thanks to John Christeson, who has done a lot of very hard work refurbishing our run down cemeteries and is joined by some wonderful people and groups. Please review some of these cemeteries — CEMETERIES IN NEED

Here's a before and after of the Kimbro Family Cemetery

A special thanks to Scott Franz and the WC Sun for this story.

Citizens of the Republic of Texas

Plaque on a Gravestone

Veteran of the Mexican War

William P. Rutledge Sr.
he was a Captain in the Mexican War
buried in the Pond Springs Cemetery

Veterans of the Battle of San Jacinto

Here is information on how to get a cemetery listed as a Historic Texas Cemetery HTC:

County Search for Historic Sites by the Texas Historical Commission

Here are only a few of the cemeteries in the county 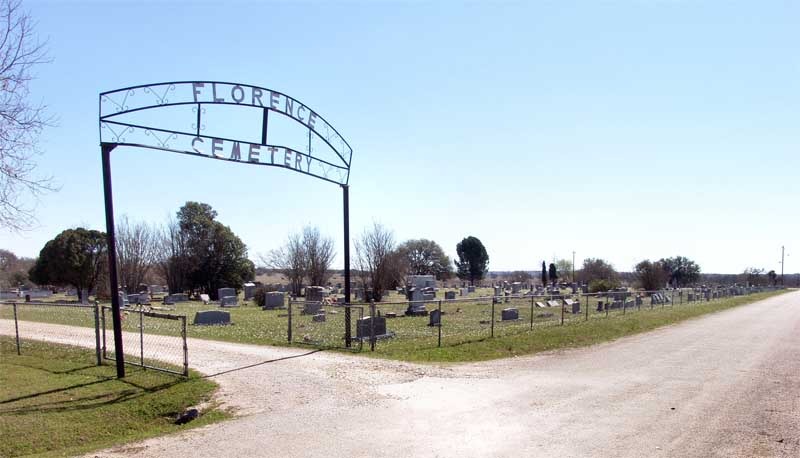 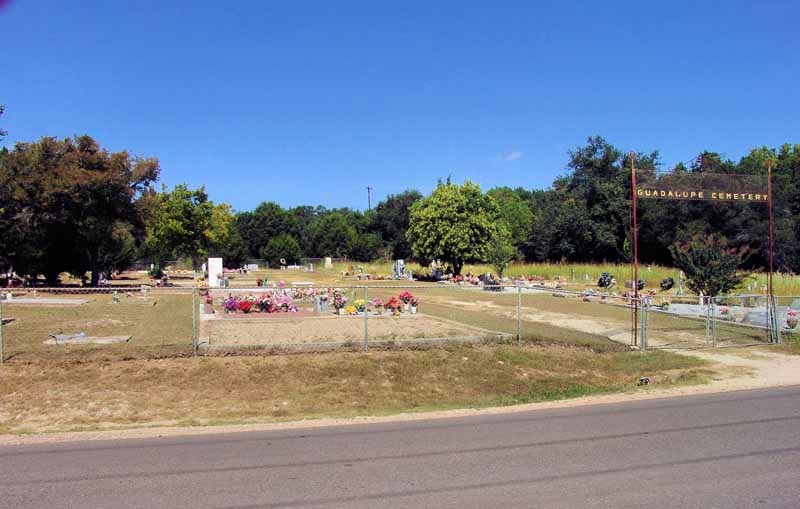 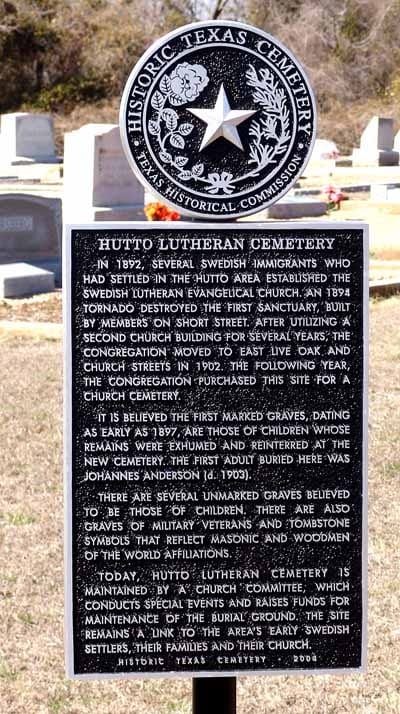 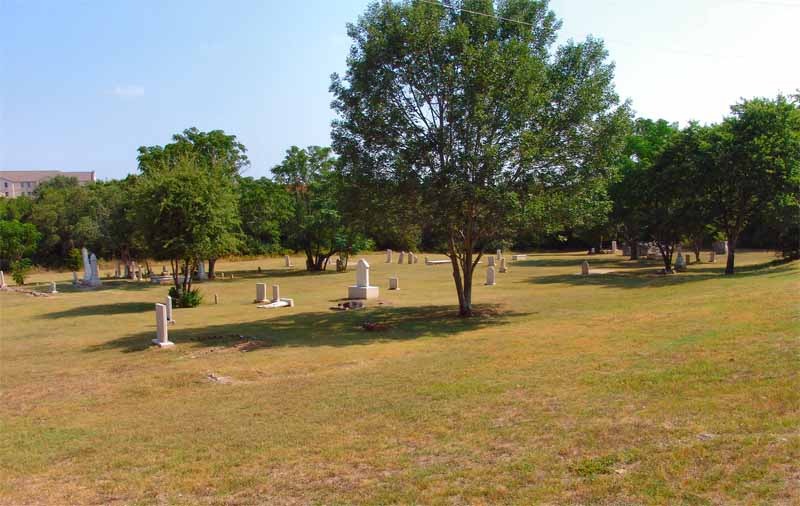 Andice in Andice on FM970 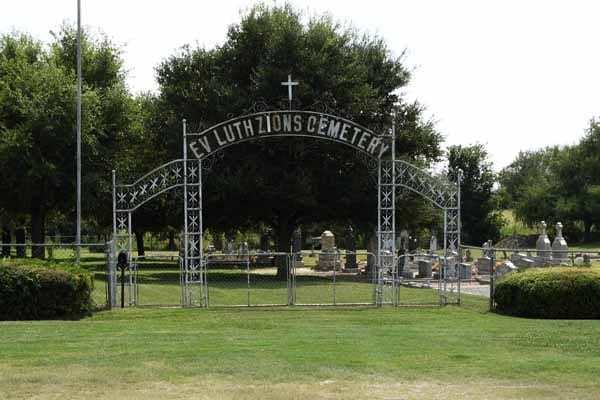 The Independent Order Of Odd Fellows

Prepared for the Williamson County Historical Museum
By Jim Dillard

More than 200 cemeteries are listed on Williamson County Historical Commission’s 1999 cemetery map. While some sites are city or church owned, others are family plots or solitary graves of nameless cowboys and pioneers. But regardless of size, they all have one thing in common: they hold the key to understanding the past.

Not far away is Emma Makemson.

As a young girl sitting on a rail fence in the front yard of her parent’s Round Rock home, Emma witnessed the mortally-wounded Sam Bass gallop past after his fatal confrontation with county deputies and Texas Rangers.

Also resting peacefully nearby is J. J. Gordon and his three wives. Gordon served many years as district clerk, as well as Georgetown ISD tax collector. The Gordons are a stone’s throw away from J. W. Hodges, a former county clerk whose tombstone bears his bas-relief portrait.

Scattered throughout are businessmen who helped build the county.

Men like David Love, who outfitted cattle drives on their way up the trail; Emzy Taylor, who helped bring the railroad to Georgetown; and the Booty Brothers, who operated a general mercantile on the Square for many years. Also “in residence” are men whose names appear on many of Georgetown’s downtown buildings: Makemson, Dimmitt, Steele and Clamp.

Texas Ranger R. Y. Secrest, who chased bandits along the Mexican border; and H. C. Purl, former county sheriff who rests next to daughter Annie, whose tombstone is the cornerstone from the original Annie Purl School.

—who fought not only for women’s right to vote but also for prison reform, civil rights for Blacks, and the passage of a Texas anti-lynch law during the 1920s—is buried here as well.

Judge G. W. Glasscock, whose father donated the land on which Georgetown’s Square is built, rests under a tall granite obelisk near Judge A. S. Fisher’s plot. A Civil War veteran, Judge Fisher closed his law practice at the outbreak of the Spanish-American War, organized a company of Rough Riders and traveled to Cuba to fight for Cuban liberation.

Resting in a shady grove is Henry Burkhardt.

Conscripted into the Prussian Army as a teen, he fled to France, joined the French Navy and sailed to Haiti. He then transferred to the French Army, which invaded Mexico at Napoleon III’s request under Maximilian, brother of the Emperor of Austria. Captured and thrown into prison, Burkhardt, an aspiring barber, shaved Maximilian prior to the leader’s execution by a Mexican firing squad. Henry later escaped and fled to Georgetown, where he operated Burkhardt’s Palace Barber Shop for many years.

And then there is the tombstone that bears a memorable inscription unlike any other.

It reads, “While very young my parents taught me: 1. Don’t whine. 2. Don’t lie. 3. Treat others like you would want them to treat you.” It closes, “I enjoyed my ride on space ship Earth.”

A special thanks to The Georgetown Heritage Society and Martha Mitten Allen for letting us post these wonderful first-person stories.
Foreword and Preface

This might not be a very pleasant thing to talk about, but I'd kind of like to tell you about the first funeral that I can remember going to and how it impressed me. It was so different from what we have now.

My grandfather on my mother's side was a retired Baptist preacher.

One time (1870-73), he pastored the First Baptist Church in Dallas, which is, of course, the largest Baptist church in the world. My grandmother had died even before I was born, and Grandpa came to live with us here in Georgetown the last several years of his life. He lived to be ninety-four years of age.

I was so impressed when they had his funeral, because his funeral was held in the old Baptist Church, which was located on Church Street between Fifth and Sixth Streets. The thing that impressed me so much was that we went out to the cemetery. They had a beautiful carriage that was drawn by two beautiful black horses. There was a man dressed in black by the name of Mr. Dave Whitworth, and he sat up very stately on the top of that coach and drove into the cemetery. I never will forget how impressed I was at that sight. Grandpa was buried here in the Oddfellows Cemetery in Georgetown. That made an impression on me that I will never forget.