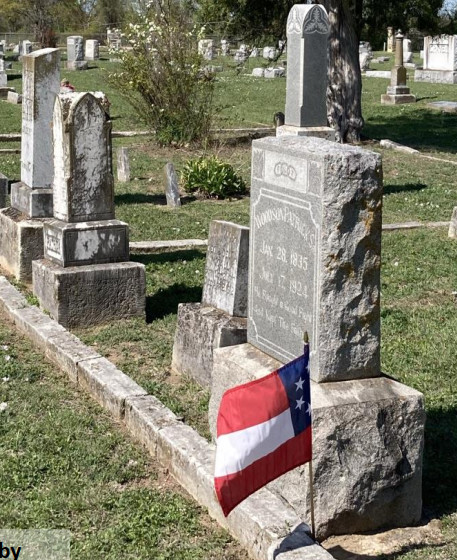 A tour of some Civil War Veterans graves in the Odd Fellows Cemetery in Georgetown, Texas

This virtual cemetery has all of the known and verified veterans who served in the Civil War that are buried in
Williamson County, Texas. By clicking on the veteran's memorial page, you can see their service flower or show their GPS location.

About The Civil War Project
The Civil War Project began as an offshoot from a project to research and locate the graves of civil war veterans in
Williamson County, Texas. The only list that existed was put together in 1966 by the San Antonio Genealogical
Society uses manual efforts to document civil war graves. It became obvious to me that I could leverage
technology to not only make it easier to put together a new, more comprehensive list but I could expand it to
include GPS locations and maps of civil war graves that had not existed before.

About halfway through the project, it also became evident to me that I needed to share the methodologies, best
practices, and frameworks that I developed to help other individuals and groups conduct their own civil war
cemetery research. The Civil War Project began.

Our website,  www.thecivilwarproject.org, contains a how-to guide, research documentation template, scoring
model, and videos that will assist those interested in documenting civil war veterans buried in their cemeteries, cities, or counties.

The end goal is not just to research civil war veterans, although that is a worthy enough goal in and of itself, but to
locate and preserve those graves for posterity.

The Texas Historical Commission, the state agency for historic preservation, administers a variety of programs to preserve the archeological, historical, and cultural resources of Texas. Texas in the Civil War

CIVIL WAR.The sectional controversies that divided the North and South in the 1850s deeply troubled Texans (see ANTEBELLUM TEXAS). While most Texans had a strong attachment to the Union that they worked so hard to join in 1845, they expressed increasing concern over the attacks upon Southern institutions by Northern political leaders. Although only one Texas family in four owned slaves, most Texans opposed any interference with the institution of slavery, which they believed necessary for the continued economic growth of the state. Tshaonline.org Civil War

The Civil War soldiers buried in Williamson County represent the cross-section of American life in the 1860s.  Veterans came from all socio-economic backgrounds – from farmers and laborers to doctors, clergy, and public officials. Men on both sides of the conflict of all ages answered the call to arms.  From boys barely in their teens to John Berry who joined at the age of 75.  While many served in regular Union and Confederate Army and Navy units, far more served in local militias guarding the home front and providing frontier defense once the Union Army units left at the start of the war.  Veterans that were either too old or too young to serve in the regular forces joined the militias, the most notable being the 27th Brigade of the Texas State Troops which was mustered in Williamson County.

Some were not so lucky.  James Wilson, buried in the Wilson Spring Cemetery, near Taylor, was the color bearer for Company C of the 17th Texas Cavalry.  He was killed in action during the Battle of Mansfield in 1864 at the age of 23.  Many more were killed in action and buried near where they died.  Peter Gustavus Williamson, son of the county’s namesake Robert McAlpin Williamson died because of wounds suffered at the Battle of Gettysburg and was buried at the Hollywood Cemetery in Richmond, VA. 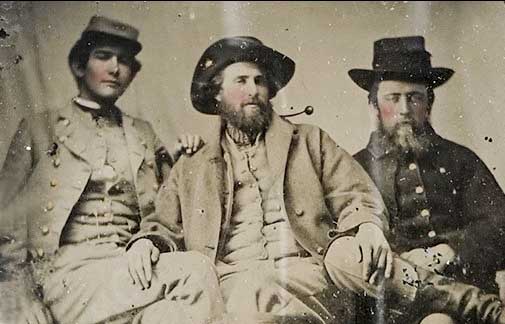 Some veterans were notable pioneers, like John Berry, a veteran of the war of 1812, who, at the age of 75, joined the 27th Brigade of the Texas State Troops, a local militia.  Abner Doak, a surgeon for the 24th Virginia Cavalry, buried in the Taylor Cemetery, would survive the war to return to Taylor, serve as the mayor for two terms, and raise money to fund the construction of schools in Taylor.  But most of the veterans buried in the county were working-class men, farmers, blacksmiths, and merchants who served in the war and either returned or moved to Williamson County after the war.  One example is William A Magruder, also buried in the Taylor cemetery.  Magruder was a farm laborer in Ohio when the war began.  He joined the 122nd Ohio Volunteer Infantry and became a Captain.  The 122nd fought at the Battle of the Wilderness, Spotsylvania, Cold Harbor, and Appomattox Court House.

The Texas Generals, presented by the Texas Division of the Sons of Confederate Veterans, is a series that profiles 14 of the Confederate Generals who commanded Texas Units during the War Between the States.