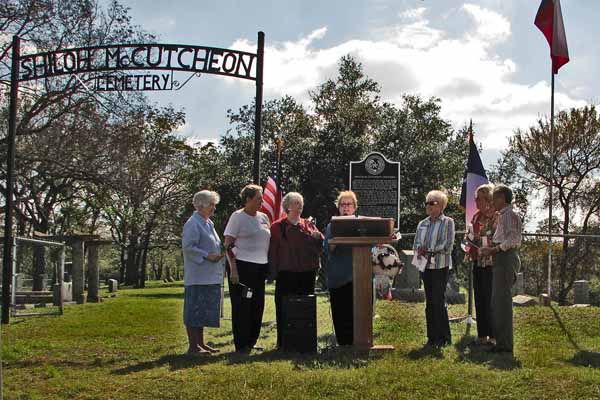 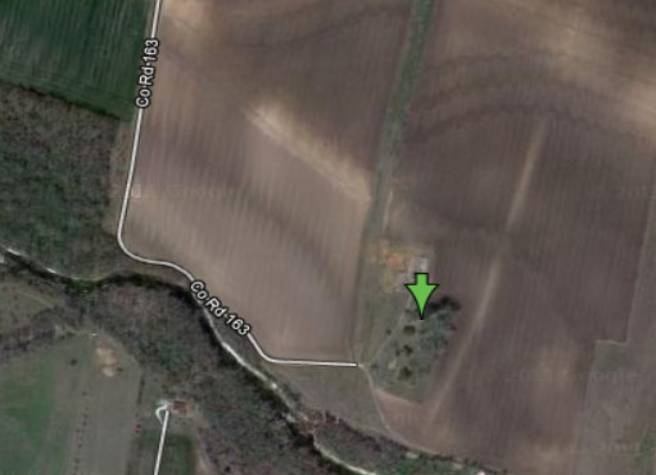 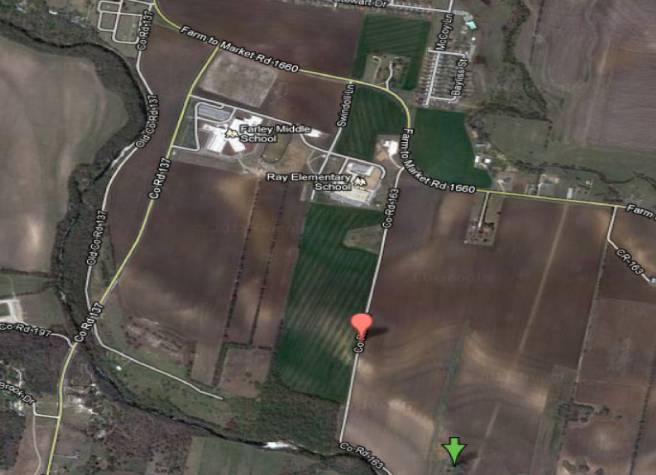 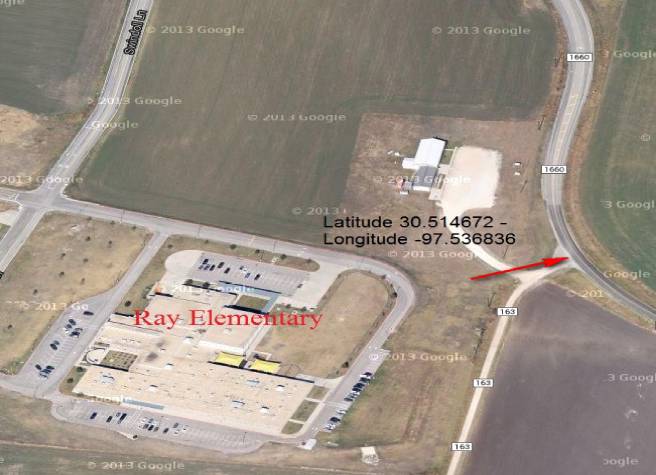 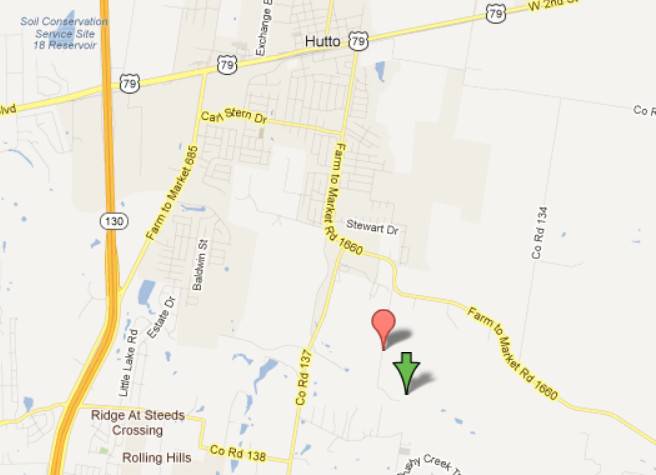 The Shiloh-McCutcheon Cemetery Association and The Daughters of the Republic of Texas would like to thank
you for coming to share in the dedication of this Texas Historic Cemetery Marker and the memorial medallions placed on William and Elizabeth Jane Harrell McCutcheon's headstone. It is an honor to our ancestors and the lives they lived. 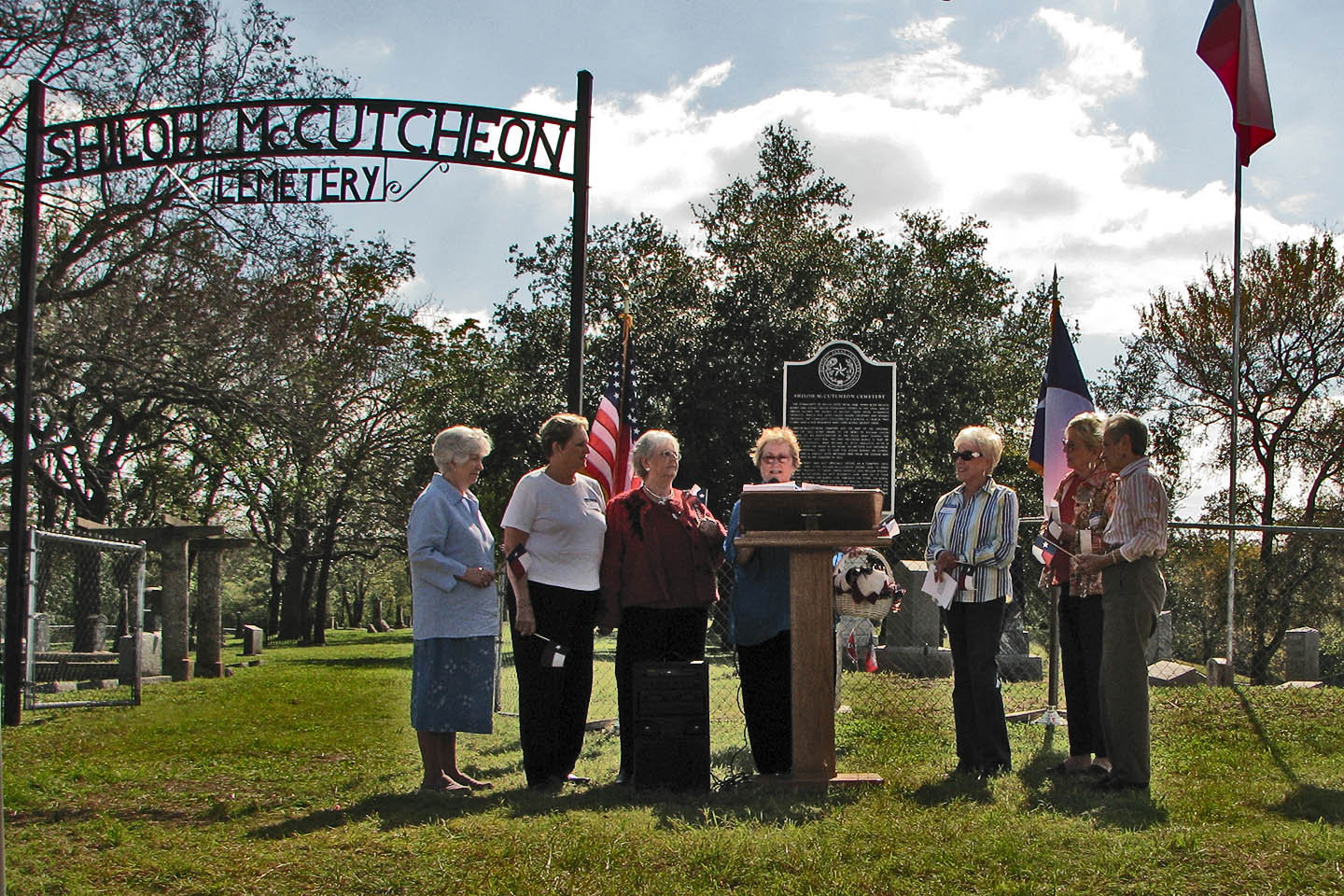 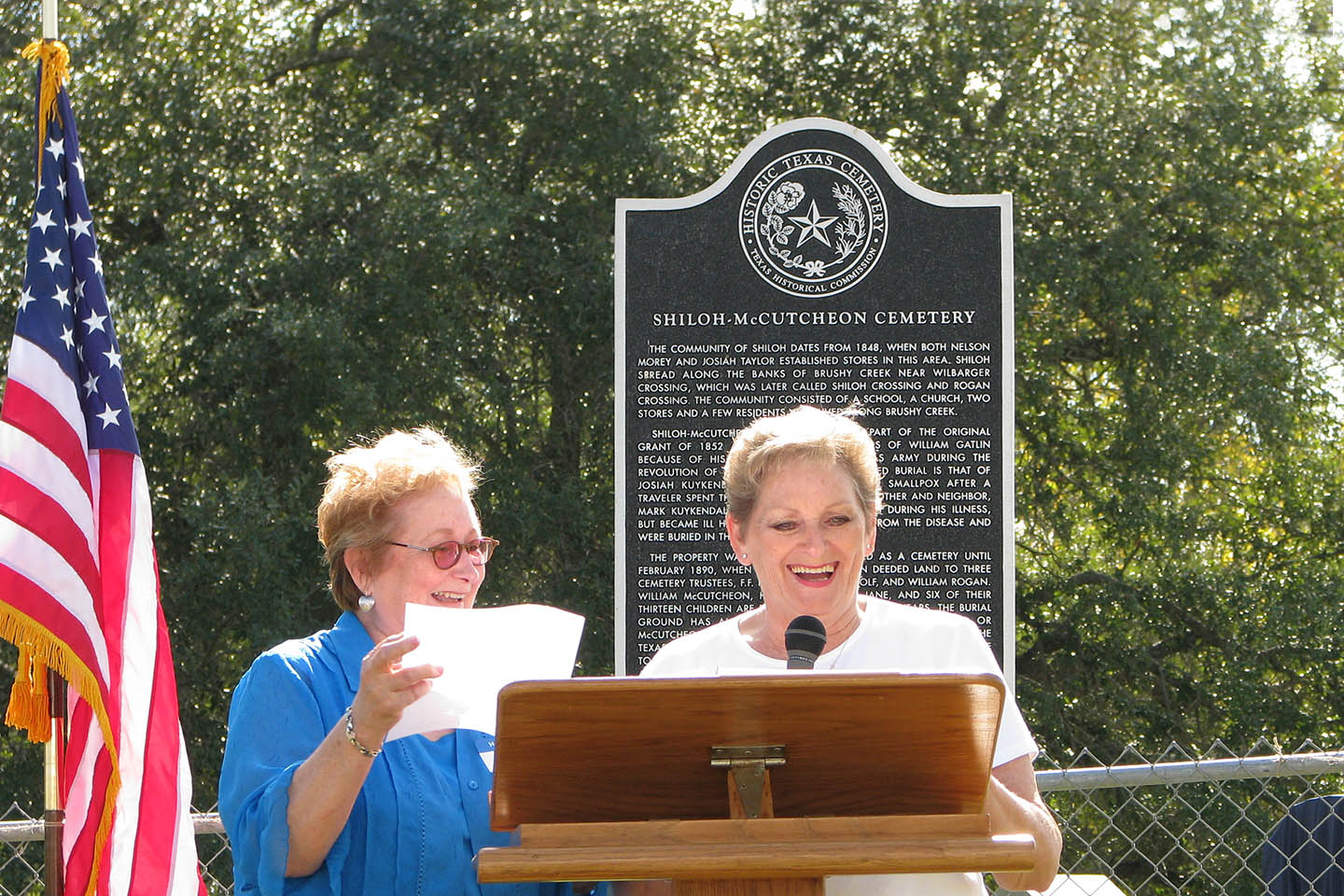 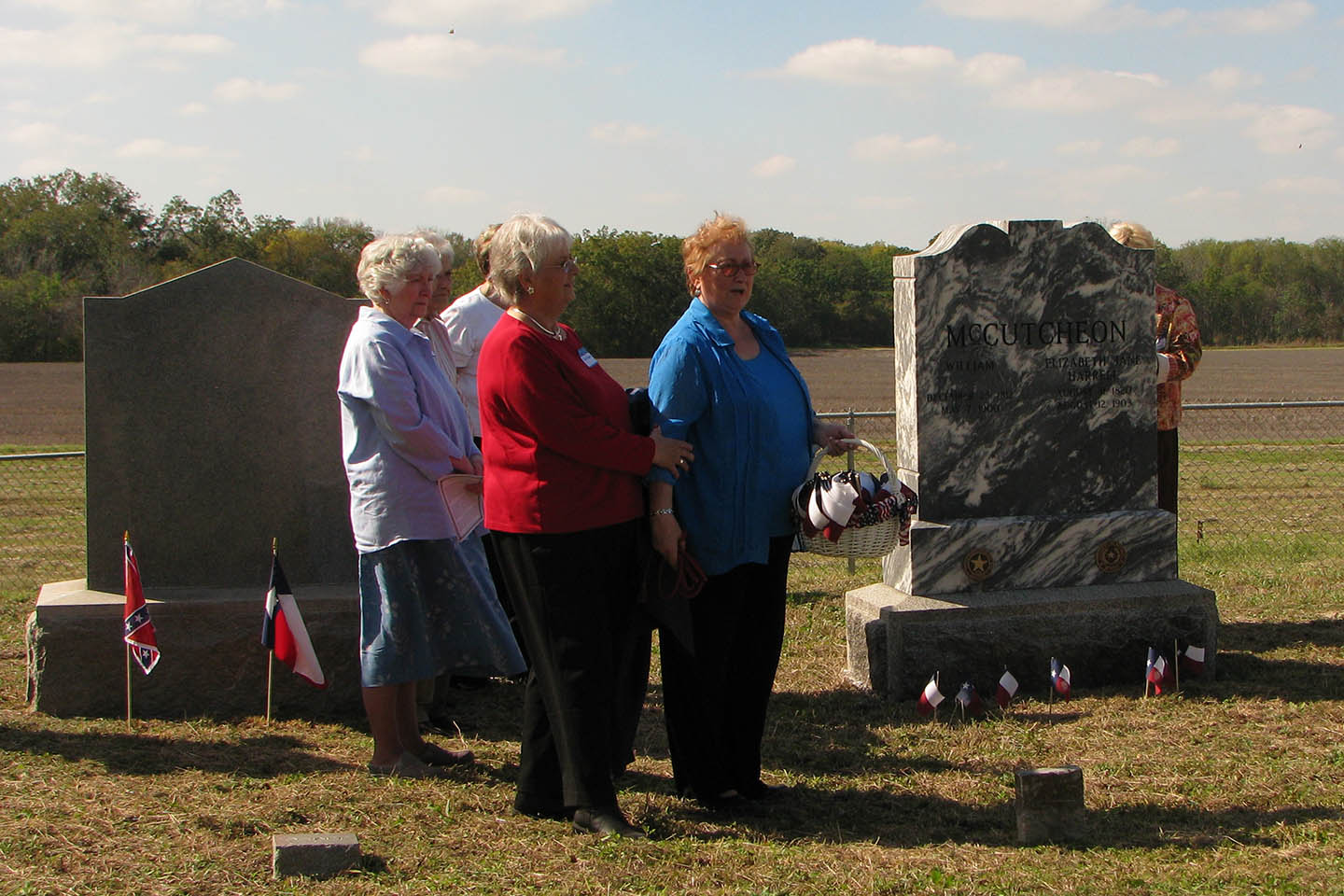 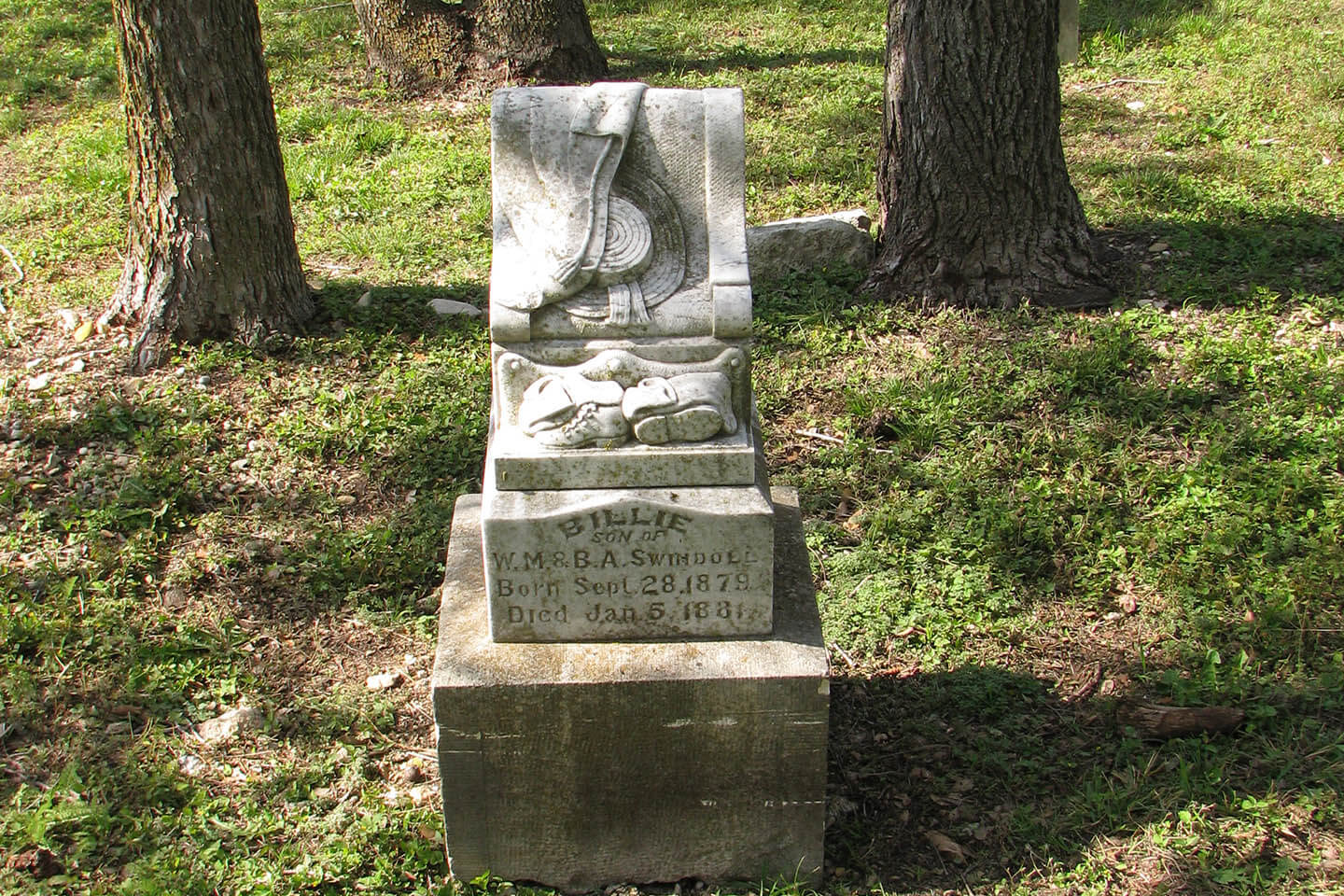 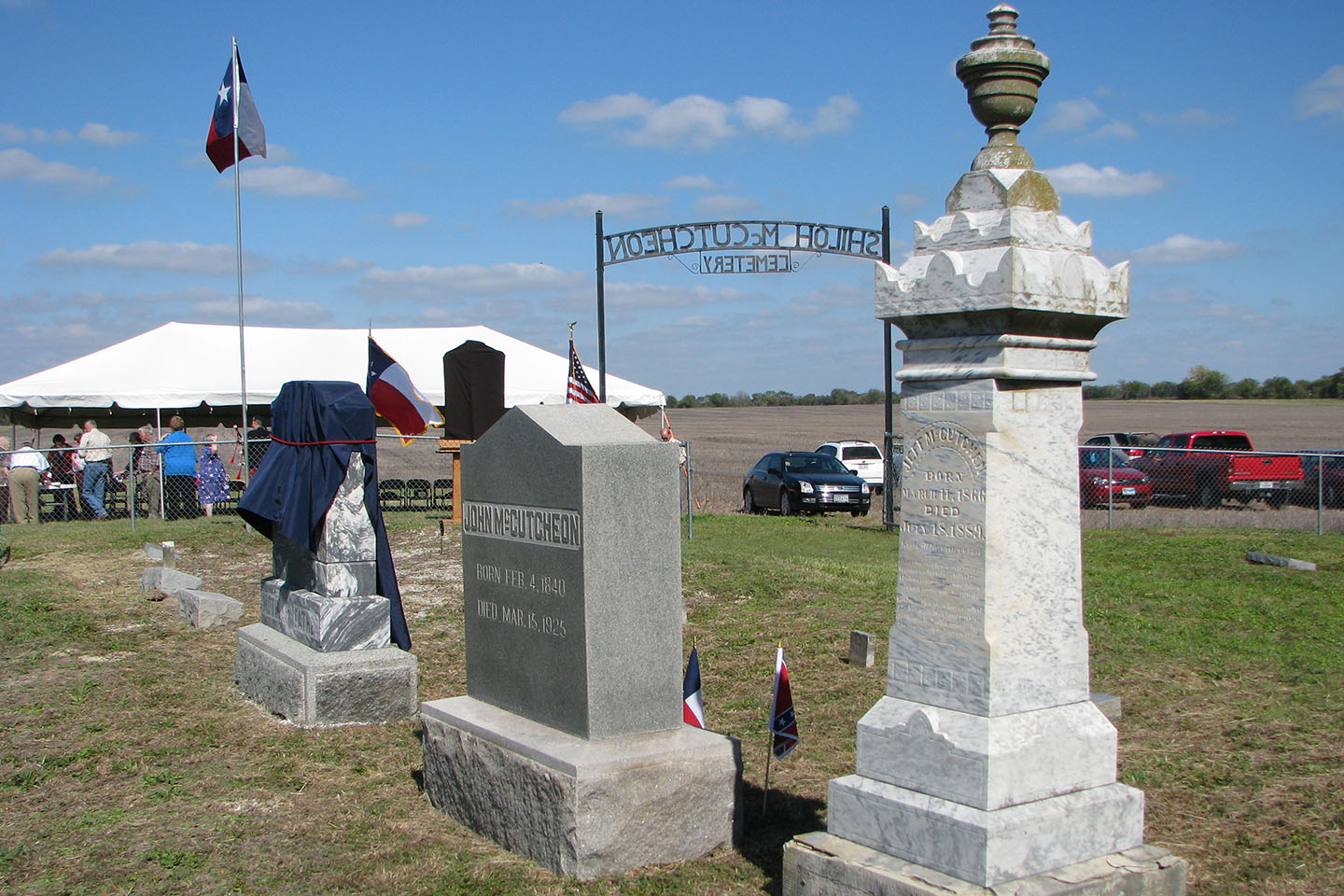 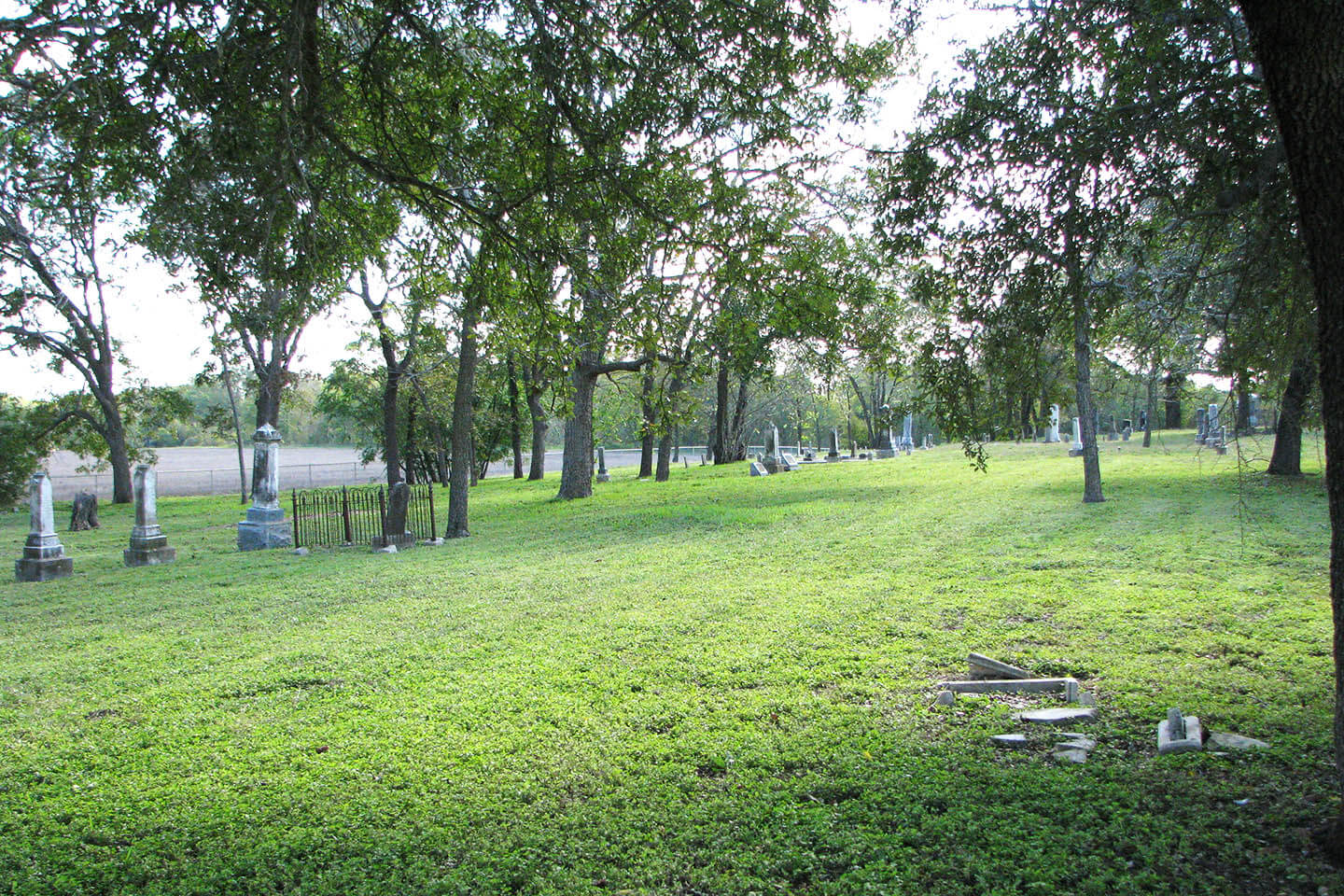 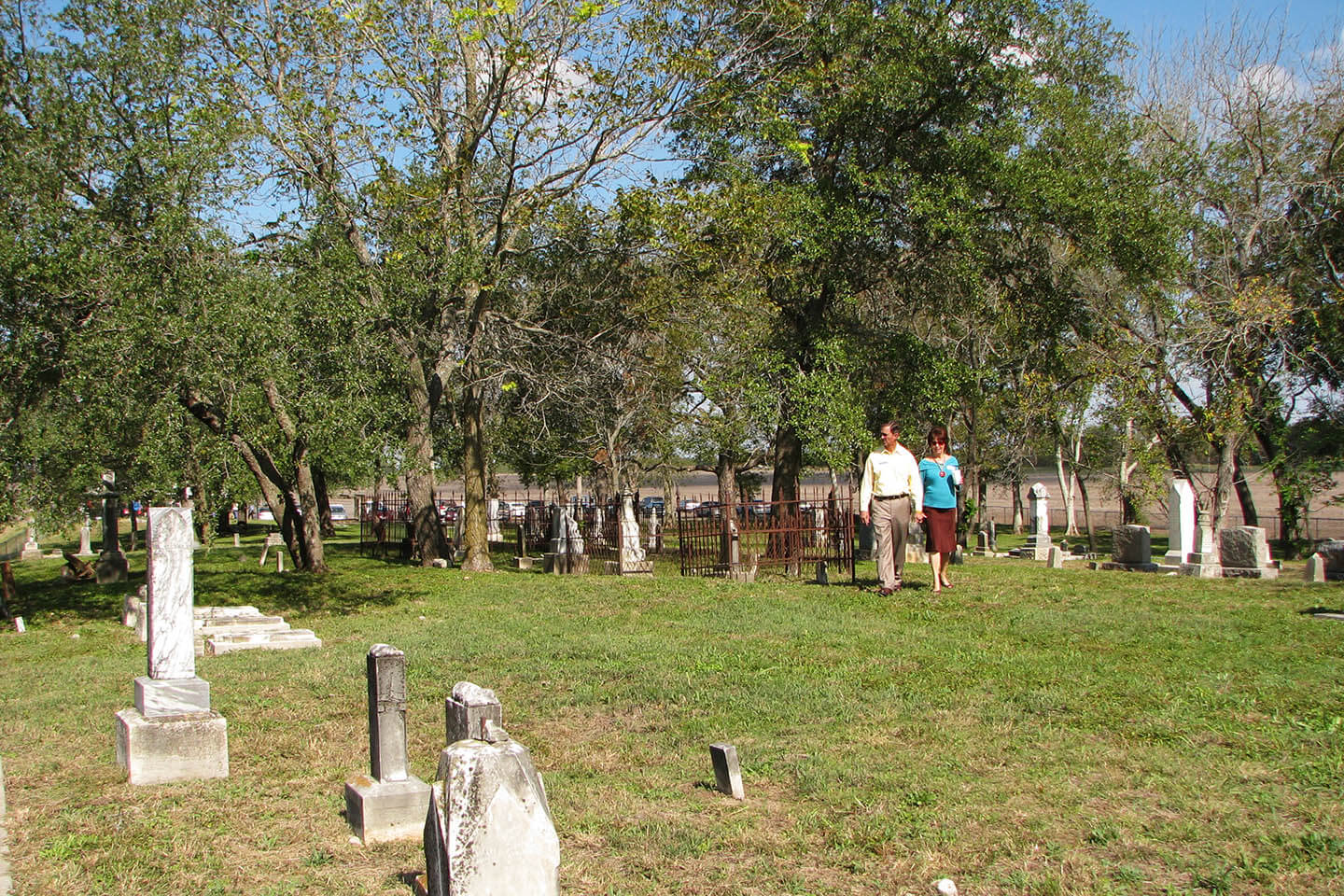 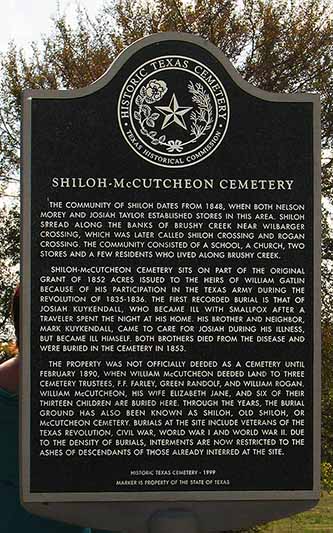 The community of Shiloh dates from 1848, when both Nelson Morey and Josiah Taylor established stores in the area. Shiloh spread along the banks of Bushy Creek new Wilbarger Crossing which was later called Shiloh Crossing and Rogan Crossing. The community consisted of a school, a church, two stores and a few Residents who lived along Brushy Creek.

Shiloh McCutcheon Cemetery sits on part of the original grant of 1852 acres issued to the heirs of William Gatlin because of his participation in the Texas Army during the Revolution of 1835-1836. The first recorded burial is that of Josiah Kuykendall, who became ill with smallpox after a traveler spent the night at his home. His brother and neighbor, Mark Kuykendall, came to care for Josiah during his illness, but became ill himself. Both brothers died from the disease and were buried in the cemetery in 1853.

The property was not officially deeded as a cemetery until February 1890, when William McCutcheon deeded land to three cemetery trustees, F. F. Farley, Green Randolph, and William Rogan. William McCutcheon and his wife Elizabeth Jane and 6 of their thirteen children are buried here. Through the years, the burial ground has also been known as Shiloh, Old Shiloh or McCutcheon Cemetery. Burials at the site include veterans of the Texas revolution, Civil War, World War I, World War II. Due to the density of burials, interments are now restricted to the ashes of descendants of those already interred at the site.

Interments by John Christeson on

View the brief on the Shiloh-McCutcheon Cemetery

Shiloh-McCutcheon Cemetery is located southeast of the Williamson County Courthouse in Georgetown near the town of Hutto, Texas, on 163 off State FM 1660. The cemetery sits on a small hill, the only significant rise in the area, and is fenced with an entrance on the north end of the cemetery. [1]

The community of Shiloh sprang up on the banks of Brushy Creek. It was located near Wilbarger Crossing, later called Shiloh Crossing and Rogan Crossing. The small community which the cemetery originally served no longer exists; however, it predated Hutto. The demise of Shiloh may be in part due to the founding of Hutto as families relocated to that nearby town as the railroad made its entry into the area. The Shiloh settlement dated to 1848 when Nelson Morey and Josiah Taylor established stores in the area along Brushy Creek. [2]

The land where the cemetery sits was part of an original land grant #9575 for 1852 acres issued to the heirs of William Gatlin, “who was an officer in the Army of the Republic of Texas and was killed at the defeat of Col. Fannin by the Mexican Army.” [3]

Located near Hutto, Williamson County, Texas, the community of Shiloh consisted of a school, a church, two stores, and a few residents who lived on or near Brushy Creek. This area was a cattle crossing during the days following the Civil War, but before that, it had been a major route taken by many as they advanced southward through Texas. The residents of Shiloh made up some of the first settlers of Hutto once its railroad came through. Many of the early families who lived in Shiloh were buried or have relatives who were buried in Shiloh-McCutcheon Cemetery, known as both the
Shiloh Cemetery and the McCutcheon Cemetery during the earlier years. However, the first burial in the cemetery was attributed to a woman's death passing through the area. The first recorded burial was Josiah Kuykendall, who became ill with smallpox after a traveler spent the night at the Kuykendall home. Josiah’s brother Mark, who lived nearby, came to care for his brother during the illness. They both died and were buried in the Shiloh Cemetery in 1853. [4]

Even though the cemetery had been in existence from at least the time of the 1853 burials of the Kuykendall brothers, the land was not deeded as a cemetery until February 5, 1890. William McCutcheon to Shiloh Cemetery by Warranty Deed on February 5, 1890, filed February 13, 1890, at 9 AM, Vol. 52 Page 205 Deed Records of Williamson County, Texas. William McCutcheon formally deeded the land for a cemetery with trustees, F. F. Farley, Green Randolph, and William Rogan.[5] Two of the original trustees, F. F. Farley and William Rogan, are buried in the Shiloh-McCutcheon
Cemetery. [6] Green Randolph died in the Territory of New Mexico on January 3, 1893, and is buried in the Masonic Cemetery in Las Cruces, New Mexico. [7]

William McCutcheon was born in Davidson County, Tennessee on December 25, 1812.

His parents were William and Catherine Cynthia Overton Avery McCutcheon. Son William came to Texas with his older half-brother Willis Avery in 1832, and the following year his mother, Catherine (Overton), her third husband Gordon C. Jennings, and their four children joined William and Willis. William met and married Elizabeth Jane Harrell in 1835. Elizabeth was the daughter of Jesse Harrell and niece of Jacob Harrell, who was her guardian after the death of her parents. Jacob Harrell came to Texas in 1834 and lived in Travis and Williamson Counties. William and Elizabeth were the parents of 13 children, Willis, Mary Jane, John “Jack,” Jesse Anderson, Sarah, Joseph Thomas, George Aubrey, William Franklin, Fannie Ellen, Elizabeth Alzada, James Walter, Beauregard, and Jefferson Davis. 8 William, his wife, Elizabeth Jane, and six of their children, John, Jesse Anderson, Joseph
Thomas, George, Fannie E., and Jeff are buried in the cemetery. [9]

Shiloh-McCutcheon Cemetery is significant because it documents the families who lived or passed through the small community. Once the community no longer existed, it documented the families who remained in the area. The five (5) tombstones in a row of the Hyslop family, who all died within a 12 month period, plus six (6) other deaths at that time, suggest that there was some tragic illness. In all, there are at least 30 identified burials of children fifteen or younger, and there are likely many more whose identifying markers have been lost over time. [11]

The cemetery also documents the existence of William and Elizabeth Jane (Harrell) McCutcheon and six (6) of their thirteen (13) children who are buried there. The McCutcheons were large landholders in the area surrounding the cemetery and several miles to the north of it, also in the area between Norman’s Crossing and Rice’s Crossing. William and many of his children, especially John, owned significant amounts of land in this area. [12]

Several of the other children owned or controlled land in the West Texas area around Fort Davis.

Willis, the oldest of the McCutcheon sons, had taken up ranching near Victoria but kept hearing about some Texas mountains with good grass in West Texas. In the 1870s, Willis, along with his brothers, William and Jeff McCutcheon, rode west until they found the Davis Mountains. They liked what they saw and immediately claimed a lot of good land north of Fort Davis. Jeff, the youngest of the brothers, got sick, died, and was taken back to Shiloh for burial. Later, William, brother to Jeff and Willis, was killed by a freight hauler over some burros. On Christmas of 1882,
Willis rode back to Central Texas, where most of the family lived, and convinced brothers Beau and Jim to come to West Texas. When they got there, they acquired
large amounts of land. [13]

The only burials permitted today are ashes of people who are direct descendants of persons already buried there. This is because of the large number of unmarked graves.

The city of Hutto, in its rapidly expanding borders, is approaching the cemetery on the north, south, and west. Near its southern and western borders, Hutto Independent School District has built two schools. To the north and west, Hutto is expanding its housing population and its borders.

This cemetery is a part of the early history of a significant area of Williamson County. As the city of Hutto envelops the cemetery, it is important and necessary that a historical marker is in place for the public to be aware of this history.