Marker Text
Alabama native Sampson Connell, Jr. (b. 1822) came to Texas with his family in 1834. Sampson, his father, and his brother participated at the battle of San Jacinto in 1836. For his efforts, Sampson received a land grant in Washington County. He moved to Milam County where he helped found the San Gabriel Christian church, later settling in Williamson County as a farmer and stockman. During the civil war he served in Capt. Robert Ashford’s co. b, 1st regiment, 27th brigade, and later in the local home guard. This family cemetery, also known as bear creek, was part of his homestead, and his 1873 burial cairn is the oldest known grave. Several relatives and friends are interred in this burial ground that honors a pioneering Texas family.

MARKER IS PROPERTY OF THE STATE OF TEXAS 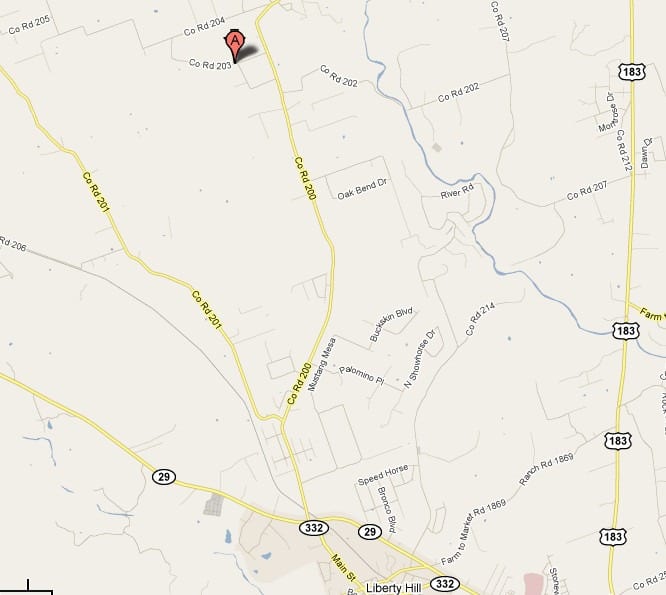 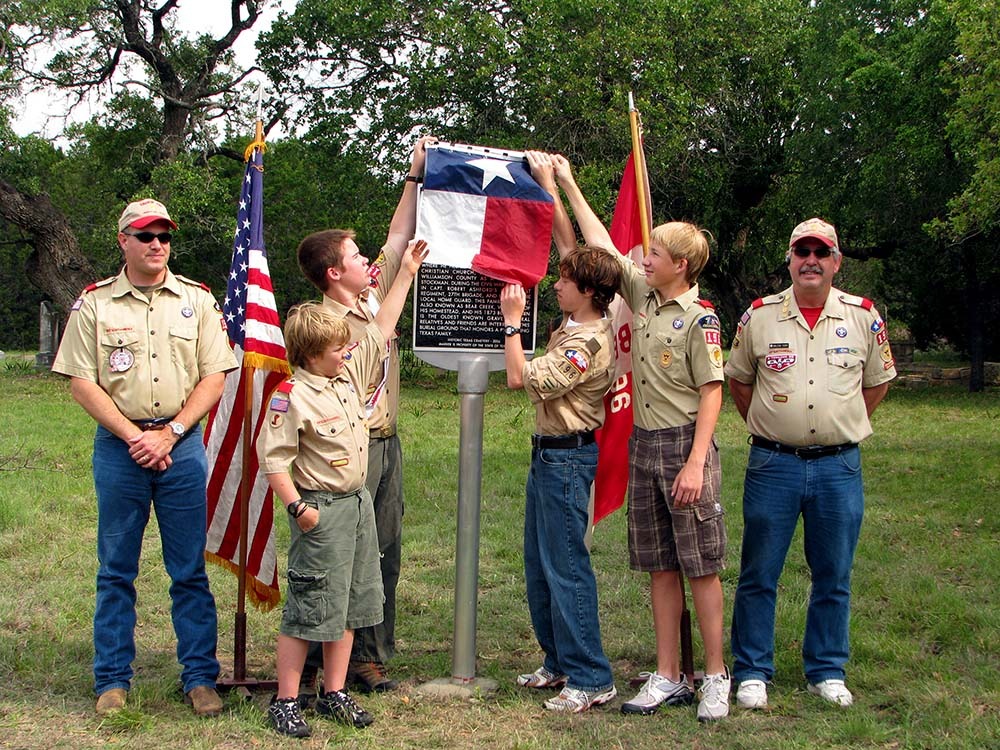 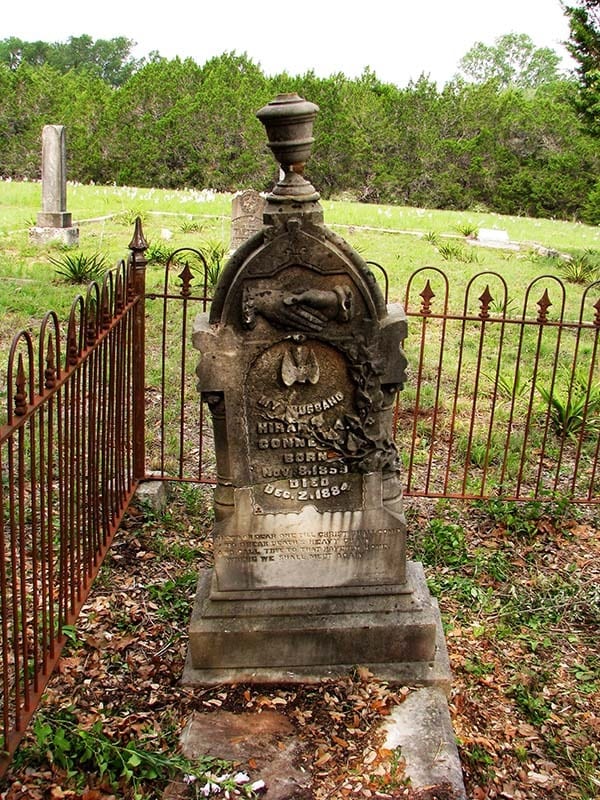 a Citizen of the Republic of Texas

Sampson Connell, Jr., alongside his father, Sampson Connell, Sr. and his brother David Cook Connell delivered the last load of supplies to the Alamo (maybe) before it was attacked by the Mexican Army. Later the three fought side by side in the "Battle of San Jacinto." Following Texas winning its' independence from Mexico, Sampson Connell, Jr. received a land grant in Williamson County from the Texas Republic for his efforts and patriotism. On his headstone is the bronze plaque for "Citizen of the Republic of Texas, 1836-1846."

Inscription:
Blessed are the pure in heart
For they shall see God.

Sampson and Milly, with their seven children, came to Texas in 1834. Settling first at Mina, where Milly died in August 1834. He is quoted as saying that during the runaway scrape, he moved his family on a pair of old trucks that went crunchy, crunchy. He was a wagon master for the Texan Army and was listed in the Garrison of Bexar when Colonel J.C. Neil left the Alamo in February 1836. Family tradition says he delivered the last load of supplies into the Alamo. He was at Gonzales when the news was received about the fall of the Alamo and the slaughter of Fannin and his men at Goliad.

He participated in the Battle of San Jacinto on April 21, 1836. He was in the First Regiment of Texas Volunteers under Colonel Edward Burleson and Company C under Captain Jesse Billingsley. By 1838, he and his family were living in Washington County. Sampson received a land grant and one labor as a colonist and head of a family and a 640-acre donation for serving in the Battle of San Jacinto and many other land donations for payments for his arms' service. He died on July 27. 1845 near Brenham, and family tradition says he is buried in Old Independence Cemetery in an unmarked grave.

The Connell Cemetery, sometimes called the Bear Creek Cemetery, is located approximately 6 miles from Liberty Hill, Williamson County. There is another Bear Creek Cemetery in Bertram, Burnet County, so for confusion’s sake, the cemetery in the discussion will be referred to as the Connell Cemetery. The most direct route is from Hwy 29 at Liberty Hill, go north on Bear Creek Ranch Road (CR 200). Cross Bear Creek, take the first left-hand road (CR 203), and the cemetery is a short distance on the right, across from Peaceful Valley Road. The land surrounding the cemetery on three sides is owned by James D. and Patricia F. Cousins. The fourth side fronts CR 203.[1]

According to the earliest readable headstone inscriptions, this Connell Cemetery was established at least by 1873 when Sampson Connell, Jr. was laid to rest on May 30, 1873. It is believed the cemetery land was given by Sampson Connell, Jr. from his land grant. There have been successions of burials in this cemetery; the latest one knows to have occurred in 1934 for one Monroe B. Allen.[2]

The “Connell Plot” within the cemetery is surrounded by a four foot high grated iron fence. This enclosed plot is approximately 15 feet on a side and shaded by large trees. Also, separated from the main plot by another fence of like, lies Anna (Brown) Connell. Some headstones within the plot are damaged and broken, but it appears all pieces are present and could be easily reassembled. 2
Within the cemetery’s land area (.79 acres) are numerous “headstones of various sizes, flat stone markers and groups of rocks,” indicating other burials have taken place within the area for many years. However, none of them are readable. Further investigation is needed to determine who else is buried within the Connell Cemetery boundaries.

Sampson Connell, Jr. was born in Franklin County, Alabama, on December 5, 1822.[3] He, his parents, and siblings moved to Texas in 1834, first settling in Washington County, Texas[4] then to Mina, Bastrop County before moving to Williamson County in 1852, settling in the Llano Grant near Thorndale, Texas.[5] In 1870 the family was in Millertown, Milam County, Texas.[6]

Sampson Connell, Jr., along with his father, Sampson Connell, Sr., and his brother David Cook Connell delivered the last wagon load of supplies to the Alamo before it was attacked by the Mexican Army under the command of Santa Anna.[7] The three also fought side by side in the “Battle of San Jacinto, “where Santa Anna was defeated, leading to Texas independence from Mexico.[8] Following Texas winning its’ independence, Sampson Connell, Jr. received a conditional head right for 320 acres in Washington County from the Texas Republic for his efforts and patriotism. 7 He later sold this and bought land in Milam County, where he was known as a farmer and stockman. 7 In 1863, Sampson Connell, Jr. enlisted in Captain Robert P. Ashford’s “Company B” of the 1st Regiment, 27th Brigade, Texas State Troopers (Volunteers), called into service for the Confederate States Provisional Army by order of H. R. Lubbock, Governor Magistrate of Texas.[9] Sampson was later given a certificate of disability discharge. He then took an active part in the Civil War as a home guard. 7
Sampson continued to live in Milam County during the late 1860s, where he was a member of the San Gabriel Christian Church and a driving force in the development of that county’s economic development. San Gabriel Christian Church was officially chartered in 1859. 7 The list of charter members included William K. Hamblen-Elder, Samson Connell-Church Elder, David Connell, James Connell, James Stiles, J.W. Hamblen, Missouri Connell, Sarah J. Connell, Margaret Stiles, Mary Mecheson, William Mecheson, Cordellia Nelms, Wilson Wills, and Margaret Wills.

Sampson and his family moved to Williamson County in 1871, where he died at Liberty Hill on May 30, 1873, at the age of fifty-five. 7 He is buried in the Connell Cemetery on Bear Creek. 2 Affixed to his headstone is a bronze plaque for being a “Citizen of the Republic of Texas, 1836-1846.”

His daughter, Annie (Brown) Connell, dying on September 2, 1918, is also buried there. 2 Sampson’s widow, Missouri Elizabeth (Hudspeth) Connell, lived in Williamson County until her death on February 17, 1901.[10] [11]She died in Sonora, Sutton County, Texas, with, as yet, no record of her burial location. Missouri is reported to be buried in Williamson County. She is perhaps in the Connell Cemetery or the Liberty Hill Cemetery in an unmarked grave. A granddaughter and two great-grandsons are buried at Liberty Hill. Her son, David Cook Connell, dying on October 18, 1869, is buried in the Connell Cemetery south of Thorndale, Milam County, Texas.[12]

Sarah Jane (Clark) Connell, wife of David Cook Connell, dying on January 28, 1897, is also buried in the Connell Cemetery at Bear Creek. 2 Sarah was the daughter of Mary Bishop (Clark) Delapain and the step-daughter of Absalom C. Delaplain, an early Methodist Minister of Washington County, Texas.

The Connell Cemetery is significant in Texas history in that it holds the final resting place for one of the “Citizens of the Republic of Texas,” Samuel Connell, Jr., who was instrumental in helping bring about freedom for Texas from the Mexican government.