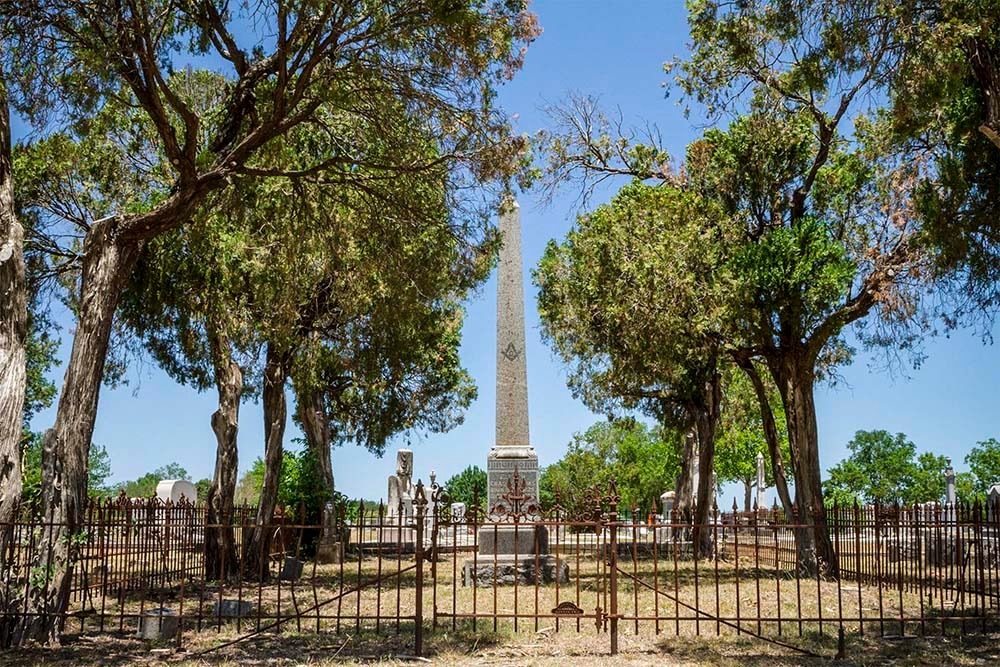 The I.O.O.F. Cemetery’s Many Interesting Stories

Prepared for the Williamson County Historical Museum by Jim Dillard

More than 200 cemeteries are listed on Williamson County Historical Commission’s 1999 cemetery map. While some sites are city or church owned, others are family plots or solitary graves of nameless cowboys and pioneers. But regardless of size, they all have one thing in common: they hold the key to understanding the past.

Not far away is Emma Makemson. As a young girl sitting on a rail fence in the front yard of her parent’s Round Rock home, Emma witnessed the mortally-wounded Sam Bass gallop past after his fatal confrontation with county deputies and Texas Rangers.

Also resting peacefully nearby is J. J. Gordon and his three wives.

Gordon served many years as district clerk, as well as Georgetown ISD tax collector. The Gordons are a stone’s throw away from J. W. Hodges, a former county clerk whose tombstone bears his bas-relief portrait.

Scattered throughout are businessmen who helped build the county. Men like David Love, who outfitted cattle drives on their way up the trail; Emzy Taylor, who helped bring the railroad to Georgetown; and the Booty Brothers, who operated a general mercantile on the Square for many years. Also “in residence” are men whose names appear on many of Georgetown’s downtown buildings: Makemson, Dimmitt, Steele and Clamp.

There are also lawmen like Charley Brady, Georgetown’s first police chief; Texas Ranger R. Y. Secrest, who chased bandits along the Mexican border; and H. C. Purl, former county sheriff who rests next to daughter Annie, whose tombstone is the cornerstone from the original Annie Purl School.

Suffragette Jessie Daniels Ames—who fought not only for women’s right to vote but also for prison reform, civil rights for Blacks, and the passage of a Texas anti-lynch law during the 1920s—is buried here as well.

udge G. W. Glasscock, whose father donated the land on which Georgetown’s Square is built, rests under a tall granite obelisk near Judge A. S. Fisher’s plot. A Civil War veteran, Judge Fisher closed his law practice at the outbreak of the Spanish-American War, organized a company of Rough Riders.

Resting in a shady grove is Henry Burkhardt. Conscripted into the Prussian Army as a teen, he fled to France, joined the French Navy and sailed to Haiti. He then transferred to the French Army, which invaded Mexico at Napoleon III’s request under Maximilian, brother of the Emperor of Austria.

Captured and thrown into prison, Burkhardt, an aspiring barber, shaved Maximilian prior to the leader’s execution by a Mexican firing squad.

Henry later escaped and fled to Georgetown, where he operated Burkhardt’s Palace Barber Shop for many years.

And then there is the tombstone that bears a memorable inscription unlike any other. It reads, “While very young my parents taught me: 1. Don’t whine. 2. Don’t lie. 3. Treat others like you would want them to treat you.” It closes, “I enjoyed my ride on space ship Earth.”