Methodist Church and Percy’s Store (L to R), the 1920s. The store burned down later. The community is known for the Jonah Water Special Utility District, established in 1972, which serves a large rural area. 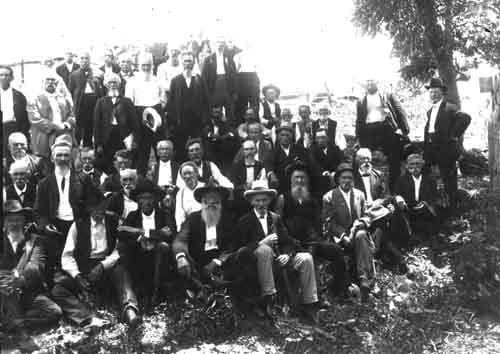 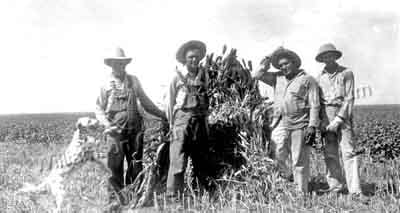 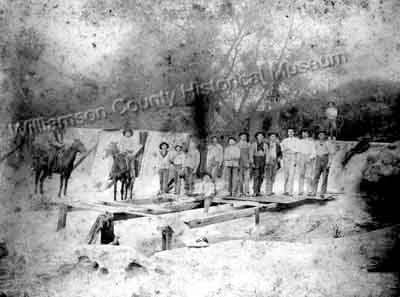 Builders of dam for mill near Jonah, Texas, ca 1895, for water wheel to power grinding wheat for flour mill. 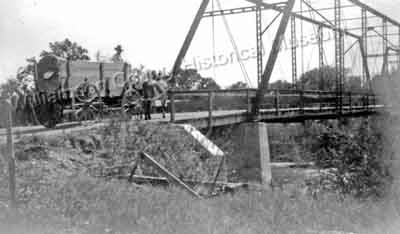 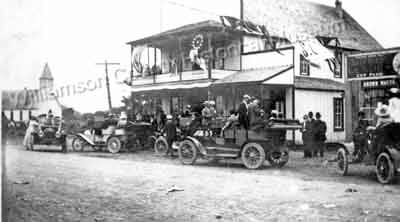 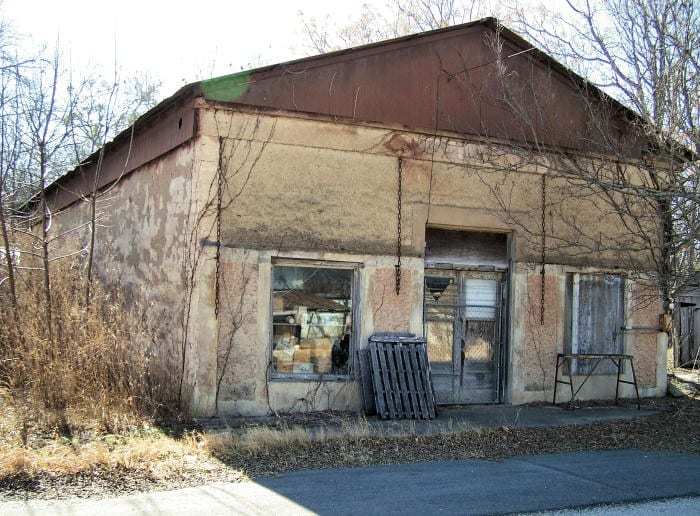 This is the original bridge over the San Gabriel river at Jonah, before it was washed away in the 1921 flood.

Richard E. Talbot, born in Cambridge, NY, 17 June 1816, of Irish immigrant parents. He came to Texas with his wife and children in 1850s to join brothers Elias and Joseph Talbot. Richard and Joseph Talbot are buried in the IOOF cemetery in Georgetown. Elias Talbot and family buried in the San Gabriel Cemetery. Richard Talbot settled near Jonah before it was named Jonah. See page 292 of "Williamson County, Its History" 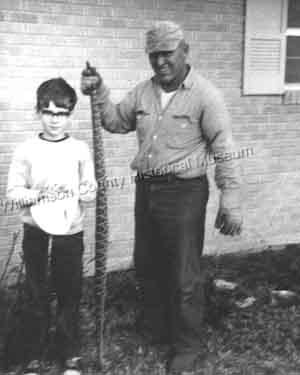 Carl Lidell in Flight Training in 1945, Carl was from Jonah, Texas 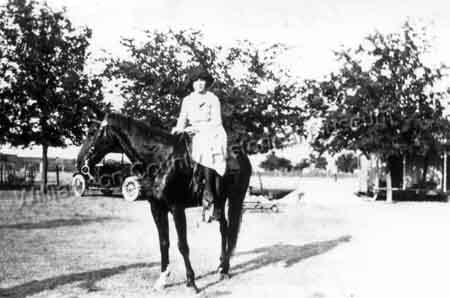 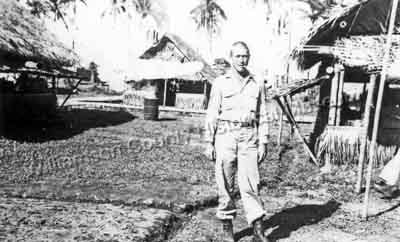 James Hood, from Jonah, Texas, during the retaking of the Philippine Islands in WWII, ca. 1944 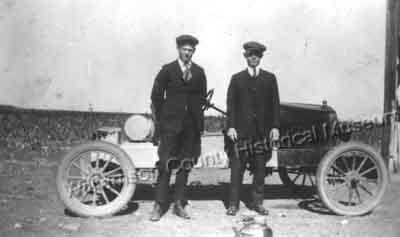 On 1820s land grant to Nashville Colony, settled 1851 by wagon train from Arkansas, and called Water Valley. In 1884, repeated ill-luck in selecting an acceptable name for post office led to renaming the town Jonah. This was site of famed grist mill, 1865 – 1912. (1970) 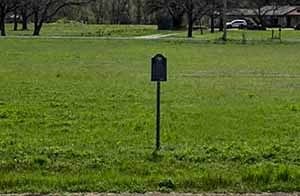 Places, people, and events make history. Old abstracts afford much interesting reading about people and the early days in Texas.

Texas and Coahuila were still under Mexican rule in 1829. Colonies were being established, even encouraged.

Moses Austin and Stephen F. Austin, and others founded colonies.

In 1824 James Warnock was granted a large tract of land. Quote: ''Whereas James Warnock has been received as a colonist in the enterprise of colonization. This grant was a part of the Nashville Colony.

In 1851 James Madison Burris bought for $500 a large part of the Nashville Grant. This land lies south of the San Gabriel River at Jonah and extends south and west.

Early colonists tried to choose locations near a stream of water, and the village was originally called ..Water Valley'', a good name and a good location.

The land was open prairie with timber along the streams.

Early important settlers - James Madison and Nancy Burris had six children: William, James H., Mary, Ellie, Bettie, and Clarissa. Each child was given a section of land. James M. Burris is buried in the old family cemetery, just across the river, from Jonah. On his grave is the following inscription:

There are many descendants of James and Nancy Burris.

His great-granddaughter, Mrs. Fannie Gattis, and great-great-grandson, Leon Gattis, live in Jonah at this time.

Another large tract of land belonged to J. T. and Penelope Mileham. This land was north of the San Gabriel River and along Mileham Branch. Along the branch are many springs that have furnished water in dry years. The Mileham's had a large family, and as each daughter married, they were given a dowry of horse, mules, and cattle. One dowry consisted of thirty picked mares (colts were thrown in) for $44.00 each, and sixty-one head of cattle for $22.50 each.

Mary Mileham married J. B. Salyer, and they lived in Jonah for many years.

Much of the land around Jonah was part of the Mileham tract. When Mr. Mileham died, his wife Penelope was appointed administrates. Appraisers for the estate were Thomas Bruce, Martin Magee, and J. R. Roberts.

East of Jonah w. another large tract known as the Whitley land.

The late Mrs. J. L. Starnes and Mrs. Bruce Rowlett were heirs to part of this estate.

As the years pass by, a few people lived between the San Gabriel and the Mileham Branch. There were no bridges, and transportation was by mule and horse. There was a small, one-room schoolhouse, and some people say the first courthouse was in Jonah, near where the gin is now.

By 1884 some of the prairies lands were being put in cultivation, and some fences were built. People raised at home a large part of their food. Hogs were butchered for meat. Fireplaces provided heat. Most families went to the woods to cut wood for winter use. There was probably more community spirit then than we have now.

The general merchandise store in 1884 was similar to the first Sears, Roebuck Catalogue of 1897, but of course on a very limited scale.

On Saturdays, the farmers came to buy the week's groceries, and since there was no need to rush, they would linger to discuss various community affairs. The .hoop cheese was on the counter, and the cracker box open, so a bite of lunch was available. Flour, sugar, and green coffee came in barrels. People parched coffee at home. The coffee mill hung on the pantry walls.

On one of these occasions, the need for a post office was discussed. So they decided to send the name Water Valley for a name to the Postal Department in Washington. Since there was one other town named Water Valley, it was not accepted. Other names were sent in, and all were rejected for the same reason. Finally, someone present exclaimed, "It surely is a Jonah" let's call the post office Jonah. So, Jonah, it has been and still Jonah since 1884.

Thanks to the general Services Administration.

The following persons have served as postmasters at Jonah, Texas

J.T. Mileham, along with the Ake family, moved to Takao from Arkansas in 1851. They came by covered wagon, driving stock, cows, oxen, and hogs, and brought their slaves. They landed in Jonah and Georgetown community.

J.T. Mileham married a Speegle girl on the trip. She died at the birth of their first child; also, the baby died. J.T. Mileham then married Phenelope Ake.

The Grist Mill was built by J.T. Mlileham on the San Gabriel River, near Water Valley during the Civil War, 1865, and was in operation, grinding wheat and corn.

J.T. Mileham sold the Mill Rights to J.R. Roberts (whose wife was an Ake).

In later years, J.B. Salyer and Jim Hays owned the Mill when it burned in the summer of 1912.

The tract of land was from the Mileham and Mc Donald place. The original Post Office is still there, the general merchandise store, the Old Blacksmith Shop. The iron bridge still stands and is usable. The Jonah Citizens are dedicated to their “Historic Jon. Community.

The three sponsors are all Jonah descendants; their families were early pioneers, with exception of Mrs. W.H. Percy, who moved there in 1908.