Before clean up photos 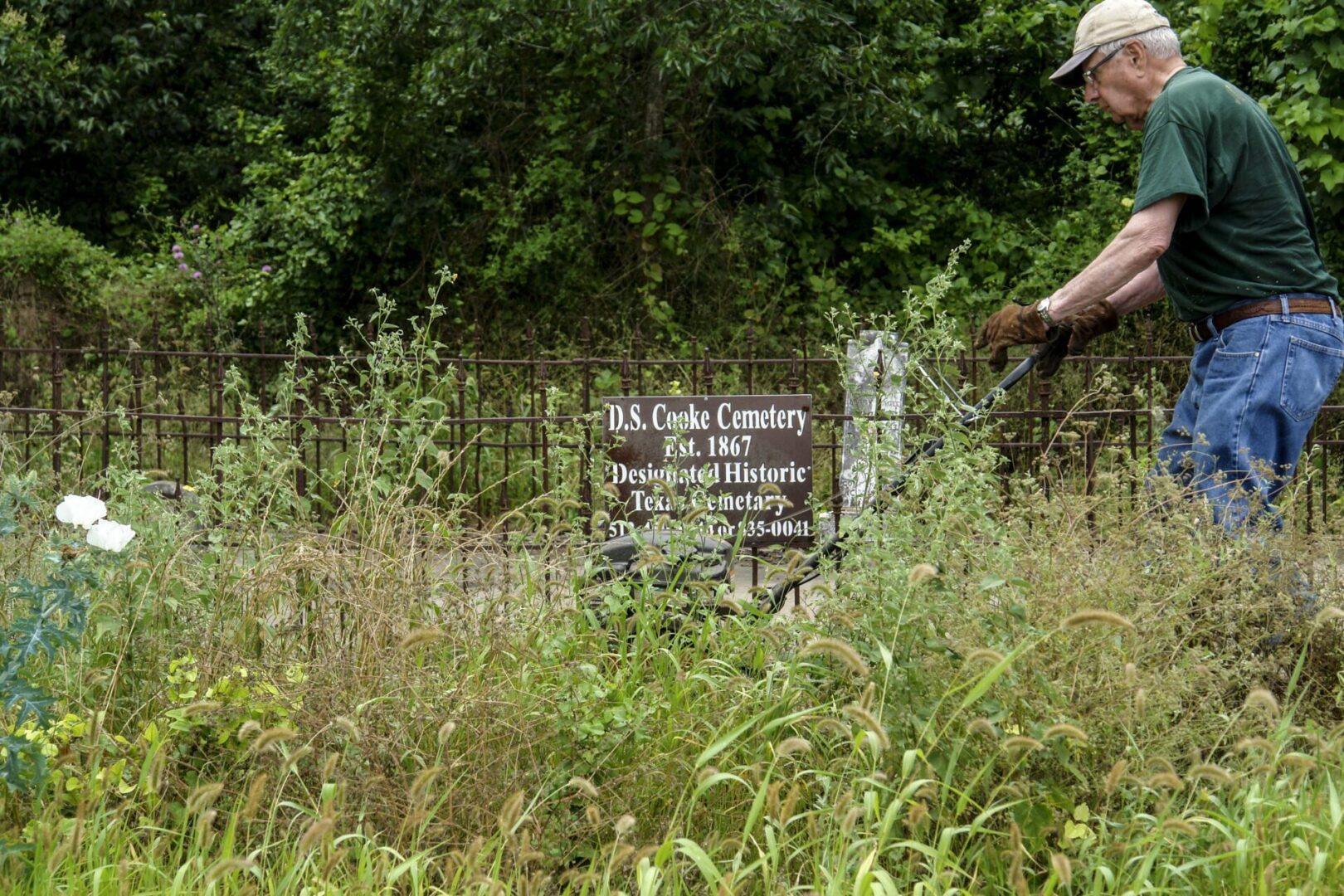 This cemetery is located south of the junction of CR-120 and CR-121 at the edge of a farm field and the adjacent woods.

This small abandoned cemetery is in a good state of preservation as it is located on a concrete slab and enclosed by an iron fence. It has not been cleaned for years and there are dead, fallen branches on the slab and small trees growing in some of the fence rails. On Nov. 2, 2010, this cemetery was cleaned of branches, a fallen tree, and a number of trees growing in the iron fencing were sawed down and removed and the concrete slab cleaned. The brush around the fence was cut and removed. More trees will be cut down in the future.

The contact person for this cemetery is Diane Cooke. Her email address is dpcooke@sbcglobal.net.

The cemetery is maintained by the “Cemetery Restoration Volunteers” (CRV) as one of the abandoned cemeteries maintained on a rotation basis of 19 cemeteries in Williamson County.  The volunteers are under the direction of WCHC’s Cemetery Committee Chair, Wayne Ware.  In 2019, there are 9 volunteers, using their own equipment.  Donations received by WCHC help to defray the costs of restoring tombstones.

A Historical Background of the David Sackville Cooke Cemetery -

On February 10, 1859, David Sackville Cooke (born December 24, 1829, in Madison County, Tennessee) and Malvina Marion Lewis (born July 19, 1836, in Rockcastle County, Kentucky) were married in Williamson County, Texas. They died within three months of each other, and their eight surviving children inherited the Cooke homestead.

The Cooke homestead was about 5 miles east of Georgetown on the San Gabriel River, about one-mile past Mankin's Crossing. The first Cooke to be buried on the Cooke homestead, daughter Lucy, died on October 27, 1867, at age seven. Then the following were buried there: David Sackville Cooke (1879) & wife Malvina Marion Cooke (1879); daughters, Mary Cooke Magee (1891) & Minnie Ann Cooke Rogers (1896); and infant granddaughter (daughter of Emily Rebecca Cooke McCormick and James W. McCormick), born and died on August 28, 1896.

The property around the cemetery was sold on September 21, 1904, out of the J. F. Ferguson League. The deed is in the Williamson County Clerk's office in Book 109, page 550. It specifies that A acre of the land surrounding the Cooke Cemetery be set aside forever as the Cooke. Family Cemetery and would belong forever to the heirs of the D. S. Cooke estate.

Around 1940, son Melchizedek Cooke had concrete poured over the six graves and the tombstones embedded. He also had an iron fence built around the cemetery.

The David Sackville Cooke Cemetery was added to the website: findagrave.com in 2010.

Obituary for D. S. Cooke in The Sun newspaper titled, "Tribute to the Memory of D. S. Cooke," written by a Committee from the Masonic Lodge, San Gabriel No. 89, A. F. and A. M., September 6, 1879.
Williamson County Census of 1880- shows that the D. S. Cooke children were still living on the Cooke homestead with the eldest son, Charles working the farm.

Original document signed by Sam Houston, Governor, and E. W. Cave, Secretary of State, on September 3, 1860, commissioning David S. Cooke as "Chief Justice in and for Said County of Williamson and State of Texas" resulting from an "election held in the County of Williamson on the sixth day of August 1860.

(family owns original document- framed Photostat copy of the document was displayed in the Williamson County Courthouse in the County Auditor's Office in the 1960s and may still be there.)

An oral history of David Glenn Cooke, Jr. to daughter, Diane Parmele Cooke (who is submitting this application) - taken between the years of 2005 and 2011.