The Interior of Zion Lutheran Church. Walburg, Texas formerly known as Concordia, is a predominately German-settled community with other ethnic groups such as Wendish, Slavic, Austrian, and Swiss settling in the area. 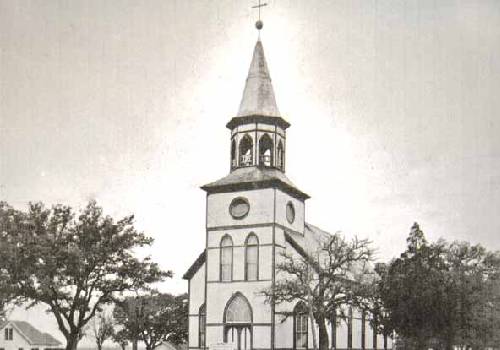 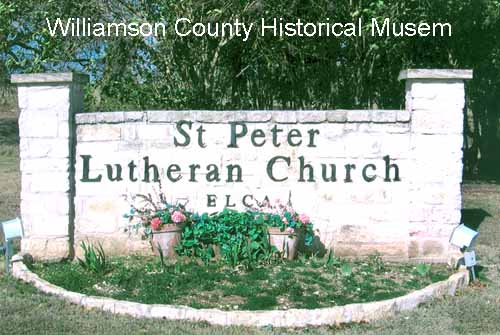 The St. Peter Lutheran Church was founded on March 31, 1889. By a small group of German settlers. In July,1889, it became a member of the First Evangelical Lutheran Synod of Texas. The first church building was built on this site in 1889. After being served by circuit pastors, the church called its first resident pastor in early 1890.

The present building was constructed in 1930. Many articles from the old church were used in the present structure, including the windows in the chancel. The other windows were gifts at the time of construction.

This congregation continues to serve her risen Lord through witness and service, and has become known as "The Friendly Little Church in the Valley." in memory of Kerney Wolf

Aerial view of Walburg, Texas taken in 1946 by Martin Anderegg from Odes Tonn's airplane which he owned and piloted. 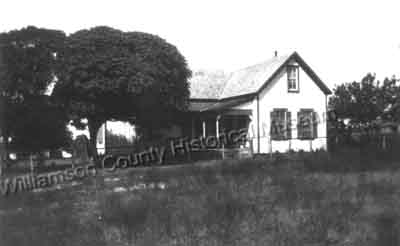 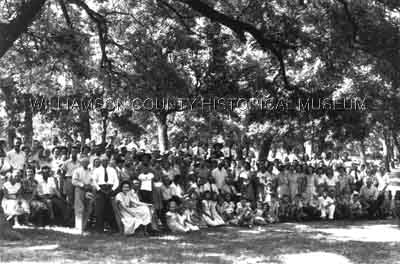 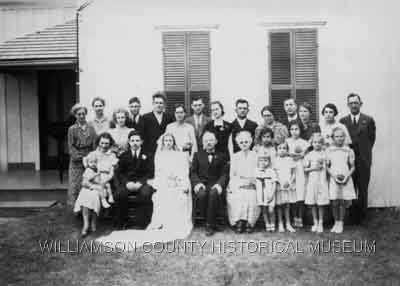 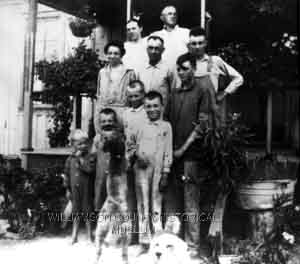 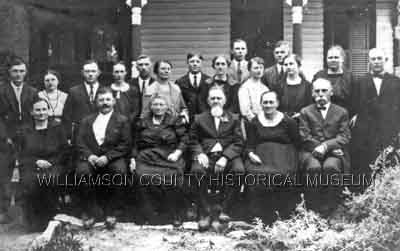 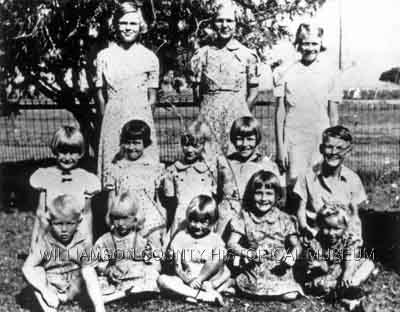 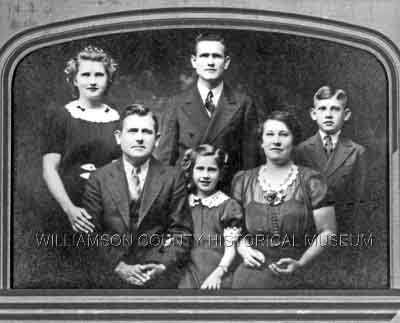 Henry Jacob Family, ca. 1918, l-r: Henry Jacob, Ben Jacob, Esther Jacob Schwausch, Walter Jacob, Gus Jacob, Anna Doering Jacob. Henry Jacob owned and operated a blacksmith shop in Walburg, Texas since 1901 until his death in 1950. His son, Walter became a partner in the business from a young lad and was later in 1939 joined with a brother-in-law, Albert Schwausch [Esther's husband] joining the business. The business was sold after his family became too old, however changing times forced this business to dissolve.

Maria Schneider Kokel, ca 1900. She was the mother of John Herman Kokel and Magdalena [Mrs Matthew] Kasperik. The Kasperik's moved to Walburg,Texas in the late 1880's,and lived one mile east of Zion Lutheran Church. 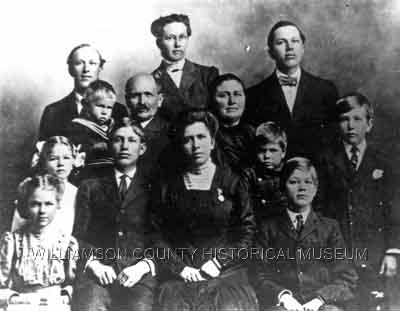 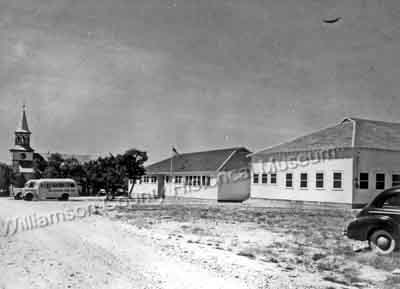 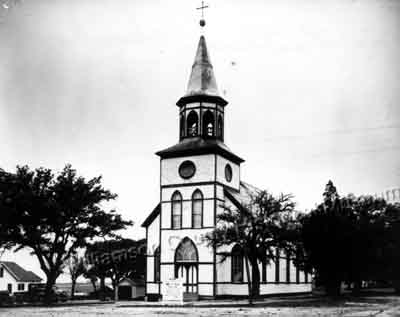 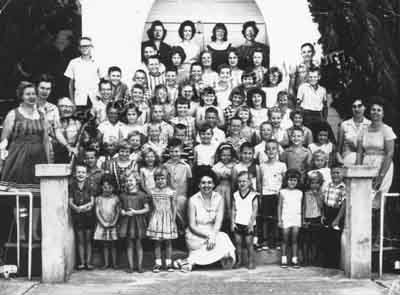 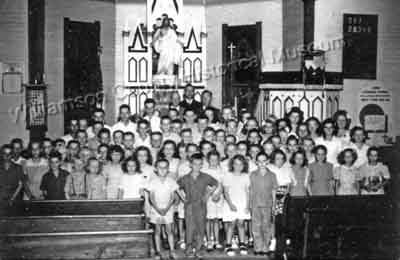 1939- Inside view of Zion Lutheran Church, Walburg, Texas. The confirmation class braided cedar which adorns altar area. The white Easter Lillies were made by Phillip Schneider, father of Gus, a member of the class.

Old Zion Lutheran church at Walburg. The parochial school was established in 1882. This church has served many pioneer families of the area.

The Matthew Kasperik's threshing crew, ca. 1913. This farm was located one mile NE of Walburg, Texas. Harvesting oats and a little wheat became a community affair. It is told that some men stayed several nights or all week while traveling with the thresher as they went from one farm to another. Some men even slept under the wagons. The women and small children followed the crew who worked from sunrise to sunset. They worked from Monday through Saturday, but not on Sunday - that was a sacred day spent at church with recreation at home in the evening. The women cooked and baked large meals on their wooden cook stoves during these hot summer days, while small children enjoyed playing 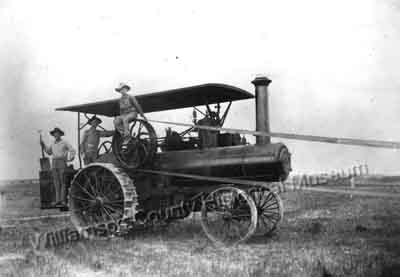 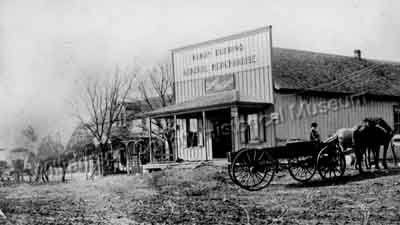 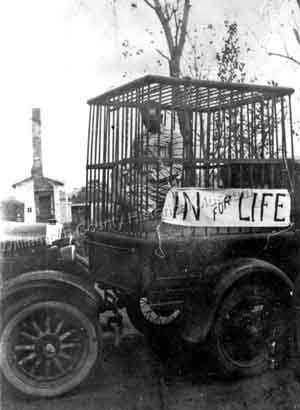 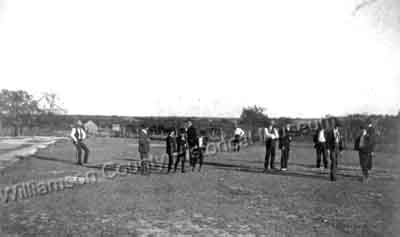 Playing croquet on Sunday afternoon on the Matther Kasperik farm near Walburg, Texas. Note that they did not bother to change clothes after church, but enjoyed a frequent Sunday afternoon entertainment. ca. 1913 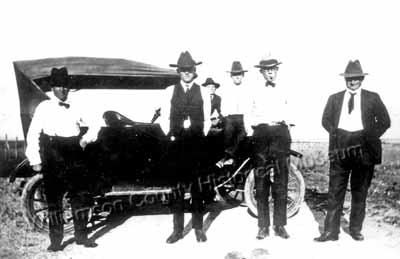 Men in suits in front of Neitsch T-Model Car

John Kasperik's home & car in Walburg, Texas, ca. 1924. Selma, son Norbert, and John are proud of their new 1924 Model-T ford with a hard top and windows.

Traugott Richter Family. L-r: front Traugott Richter, Erwin, Walter, Hulda, Lydia [Mrs. John Neitsch] back l-r: Meta, Martin, Max, Ella [Mrs Walter Zoch] Hilda [Mrs. Edwin Kokel]. Taugott Richter often recalled that when he came to Williamson County from Lee County, he moved to the Williams Ranch, east of the Yearwood Ranch. It was located about 4 miles south of Jarrell. The prairie grass was shoulder high and snakes could be seen sticking their heads above the grass. Traugott came to Texas at age of two. His wife, Hulda Schneider came later. She had completed the 6th grade in Germany.

In February of 1923 some residents of Walburg built this snowman. 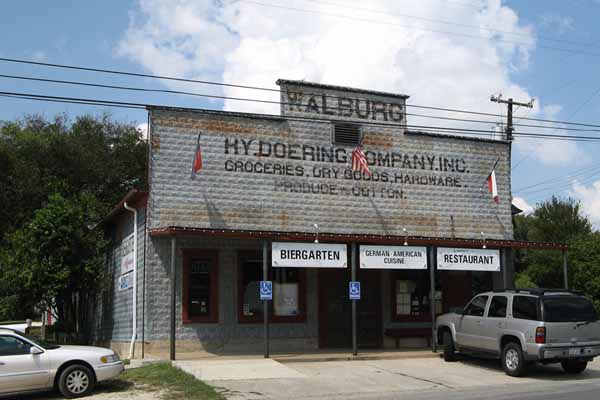