(100 yards west) This historic crossing on the San Gabriel River was named for pioneer settler Samuel Mankins, who purchased land along the river in 1849. The limestone bed in the river provided a convenient crossing for area farmers. A nearby community included a school, church, and cotton gin. A 1914 concrete and gravel causeway was replaced by a State Highway Department concrete bridge in 1931. After the Highway Department built a new bridge on higher ground at Highway 29 in 1958, the Mankins Crossing Bridge became a popular recreational site for area residents. 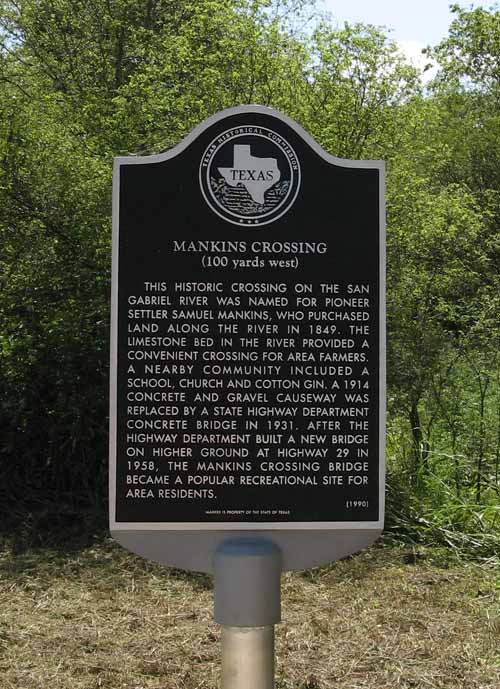 Mankins Crossing is a historic crossing on the San Gabriel River 3.2 miles east of Georgetown. It is on a 209-mile section of a side road off State Highway 29, formerly State Highway 104. The name also refers to that area around the crossing.

The name is spelled Mankin or Mankins throughout all the records, seeming to be a matter of family choice. The spelling of the name will be the spelling in the source of the material.

This was a portion of land northeast of the river, called the Nimmo Survey, which had been granted to the heirs of Samuel Nimmo and was Tennessee Nimmo's [1] dowry. On March 28, 1851, Mankins purchased a part of the Ferguson Survey from George Washington Glasscock. [2] On October 25, 1856, Mankins bought more land from John J. Stubblefield. [3]

According to the Williamson County U. S. Census of 1850, there were 242 families living in 230 dwellings. Listed in the census were: Samuel Mankin, age 35; his wife, Dotia, age 34; ten children; and William Sherwood, a laborer in the Mankin household. Mankin's taxable property was valued at $1,0004 Most of the population were farmers. The list of occupations in the census indicates that Williamson County was growing into an organized community. There were 11 blacksmiths, 5 wheelwrights, 1 gunsmith, 9 carpenters, 6 merchants, 4 surveyors, 1 teacher, 2 lawyers, 7 doctors, 5 ministers, and others. [5]

In 1853 Mankins Crossing was designated a Road Precinct in charge of the road leading from Georgetown to Cameron Road. In 1858 the court-appointed a road committee of Samuel, Evan, Henry, and John Mankin, and others to maintain the road. [6]

Although the Negro slave population was small, there were signs of the coming Civil War as early as 1853 when the County Court appointed a patrol "to exercise jurisdiction over the slaves of Georgetown." By 1861 there were more than a dozen such patrols, one near Samuel Mankins on the San Gabriel River. [7]

In 1874 D. S. Cooke deeded land to the trustees of the Live Oak Methodist Church, South [8] The church was among huge live oak trees which grew near the bank of the river. The church was moved to Jonah about 1890.

On January 6, 1879, Samuel and Dotia Mankins divided their property among their children, taking $1 in payment for each parcel of land.

Dotia Mankins signed the deeds with Her Mark. Relative to Mankins Crossing, W. H. Mankins received the southwest part [9] Evan Mankins the northeast part. [10] Samuel Mankins was the only owner of both sides of the river. Later boundaries were set in the middle of the channel of the river.

Several rural schools were established well before 1900: Mankins Branch, listed in 1886, [11] East View, at the highest peak of land between the crossing and Georgetown [12] the Bailey Negro School, a short distance south of East view, [13] the Huddleston School, located near Huddleston -Branch and believed to have been the successor to the earlier Mankins Branch School. [14]

In 1892 a cotton gin was built at Mankins Crossing by Harvey T. Stearns of Circleville. The gin was run by a son, Glenn, until 1909 when the gin was moved to Weir. [15]

Fording the river in those days was a rough ride. The limestone of the river bottom is cut into deep ruts by the water's action. A wagon had to be driven straight across the river to prevent a wheel's being caught in a rut and twisted off. [16]

In 1892 E. Mankins sold his property from the Nimmo Survey to C. H. Cooke [17] and A. C. Beaver and wife; [18] in 1893 Bethel and Kate Nowlin bought this property. [19] Dr. Bethel Nowlin was a doctor in the area with a home in Georgetown and a drug store in Jonah. [20] His first wife was Mollie Davidson Nowlin, whose sister, Sallie Davidson Mankin, was married to Luke Mankin. [21]

[23] Wileman's will states that he had acquired 1/3 of his property before his marriage. Therefore, he left for his wife, Laura, the Motley County property, and the Georgetown property which was owned jointly with his father-in-law, Capt. Tatom. He stipulates that Mrs. Wileman cares for the children until Nordine (sic) reaches the age of ten.

The San Gabriel River property was left to two minor children, Nordine (sic) and an unnamed 3-month-old daughter, and was not to be sold during their minority. 0. M. Breeden was named trustee of the estate and rented it to J. E. Wileman and J. R. Fine, the property improving over the years. The trusteeship presents records on the handling of the property which was rented to the two men at least through 1918. An automobile was purchased for the care of the two daughters. This property was 280.39 acres on the south side of the San Gabriel River, known as the old Samuel Mankins home place. In 1918 Norine Wileman reached the age of 21, and the property was divided in half. In 1923 the younger daughter, Martha, reached the age of 21. [24]

Commissioners Court records of July 13, 1914, called for a warrant for $317.20 as payment and interest to Austin Brothers of Dallas, Texas, for two steel spans for Mankins Crossing.

[25] A wall of concrete was set on each side of the causeway, and the center was filled with gravel. When the river rose, the gravel was washed away. Soon afterward it was filled with concrete. [26]

In September 1921, a hurricane brought torrential rains to Texas. The causeway was destroyed. Water was five feet deep in the Emmet Cooke home on the high bank of the river at Mankins Crossing. [27] work on the present causeway was started in 1931 by the State Highway [28] Department, and the state bought the Rights of Way, [29] thereby taking ownership of Mankins Crossing itself.

Laura Wileman's name is on the right of way deed filed April 18, 1933, for the new causeway; [30] and in 1947 a deed clarifying the names of the two daughters, Norine Egger and Martha Van Eman, was filed. [31] In 1952 the property was divided, giving Norine Egger the river property. [32] In 1974 Harold Lawson Egger and Norine Wileman Egger gave the property- to Ernest Linwood Egger, et. al. and Laura Norine Egger, et. al. [33]

The northeast side of Mankins Crossing is now owned by Kathryn Davis Wilson and her husband, Judge Don Wilson36 They live with their son, Matthew, just northeast of the crossing on the Weir Road.

In 1958 work was begun on a new high bridge just north of the causeway. [37] In 1960 the State Highway Department gave Williamson County the old section of State Highway 29 "to dispose of, as you deem fit." The Commissioners Court voted that the road should remain open for the benefit of the public. [38]

At 7:30 a.m. on November 8, 1988, a Road and Bridge crew, ordered by a county commissioner, but without Commissioners Court's approval, began to crack up the concrete of the old low water bridge. The first area resident upon the scene parked his pickup truck across the cause­way to stop the destruction. Several dozen more brought on a heated confrontation until a restraining order was signed, by a district judge.

The damage was quickly repaired and a court order demanded court approval to remove the bridge and stated that the bridge could only be closed because of high water in the area. [39] (View PDF on the story - 2 pages)
Mankins Crossing is a beautiful spot for fishing, swimming, wading, picnicking, and canoeing. It is also an important alternative to the new bridge for slow-moving farm equipment.

This historic low water bridge is one of only a few of its kind remaining in Williamson County. Mankins Crossing is a highly visible, easily accessible site.