A special thanks to the Impact Newspaper and Chris Dyer for this slice of history.
Click here for an article on the Judge

"A legacy of Civil Rights and Public Safety for Texas"

"a special credit to the Williamson
County Sun for this story"

BORN APRIL 4, 1877 IN LA VERNIA (WILSON COUNTY), HARRY GRAVES ATTENDED SOUTHWESTERN UNIVERSITY IN GEORGETOWN AND LATER SERVED THREE TERMS AS CITY ATTORNEY. AS WILLIAMSON COUNTY ATTORNEY, HE AIDED THE PROSECUTION IN A LANDMARK TRIAL AGAINST THE KU KLUX KLAN, 1923-24 (HE LIVED AT THIS SITE AT THE TIME). DISTRICT ATTORNEY AND FUTURE GOVERNOR DAN MOODY LED THE TEAM.

IN 1929, VOTERS ELECTED GRAVES TO THE TEXAS HOUSE OF REPRESENTATIVES, WHERE IN 1930 HE WROTE THE BILL ESTABLISHING THE TEXAS HIGHWAY PATROL.

IN 1937, HE BECAME A JUDGE ON THE TEXAS COURT OF CRIMINAL APPEALS. GRAVES DIED IN 1957 AND WAS BURIED IN THE STATE CEMETERY IN AUSTIN, LEAVING A LEGACY OF CIVIL RIGHTS AND PUBLIC SAFETY FOR TEXAS. 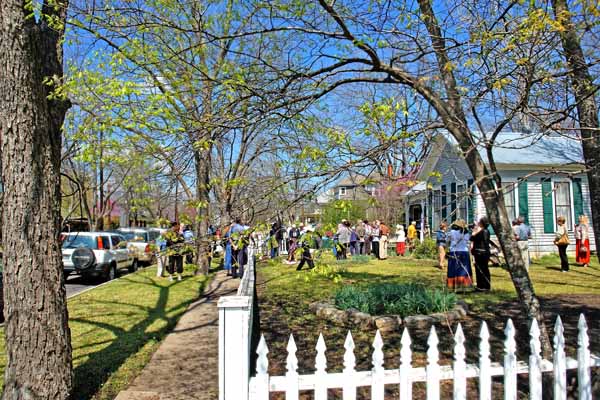 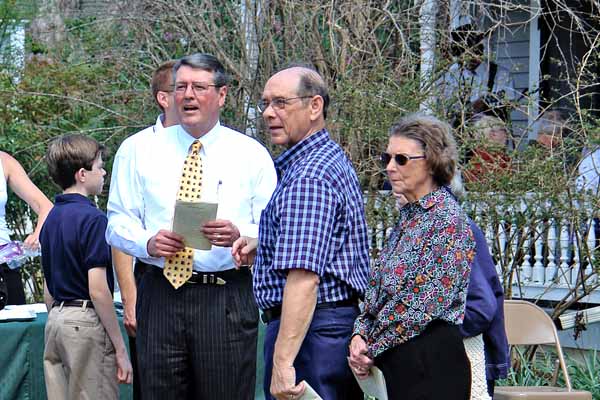 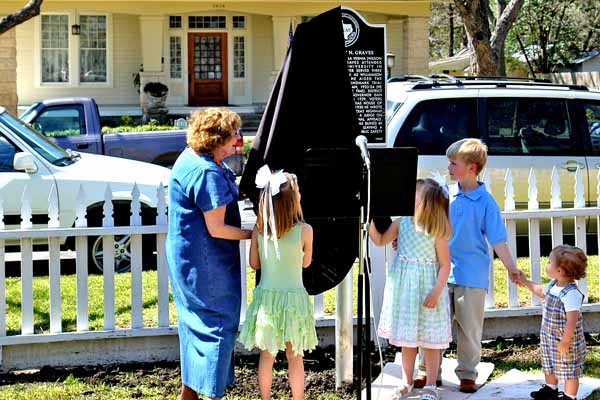 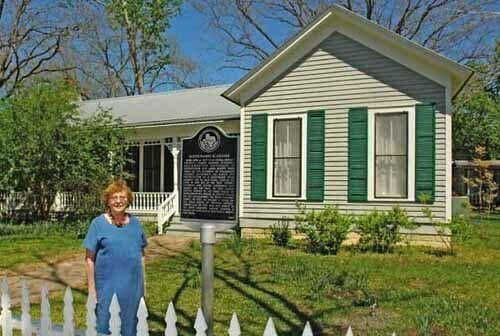 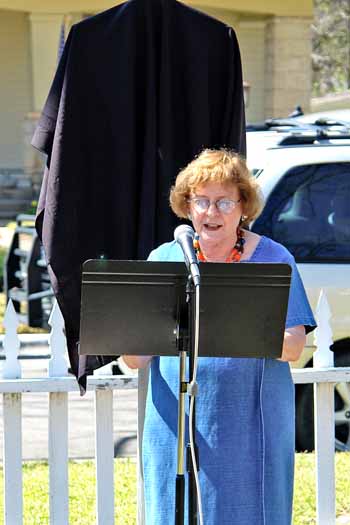 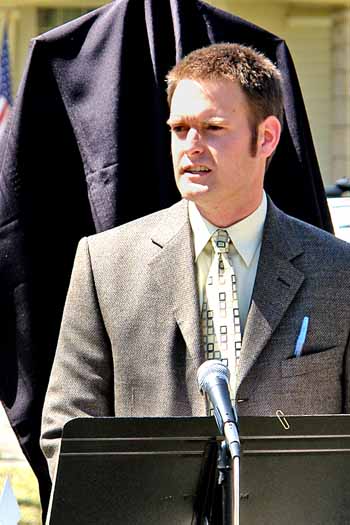 view The Home of Georgetown's Judge

A special thanks to C. Wayne Dawson and the Focus on Georgetown magazine for this article

Henry N. ("Harry") Graves was born on April 4, 1877, at LaVernia, Texas. His Parents, Henry N. and Susan Graves moved their family to Georgetown, Texas in 1844. (1) Henry North Graves, Sr. was a physician who, in winter, "rode in his buggy with a heated brick at his feet and a buffalo robe around him to keep warm." (2)

Young Harry worked for the Georgetown Democrat for two years. Because he needed financial assistance when he entered Southwestern University, he worked as a law office stenographer and as assistant editor of the Williamson County SUN. He read law at night and was admitted to the Bar at the age of nineteen in 1896. He practiced law in Sherman, Texas for a short time. After he returned to Georgetown, he was elected City Attorney, an office he held for three terms.

The couple was members of the First Methodist Church of Georgetown (3) (Dorthula's family, the D.F. Wilcoxes were longstanding members of that church.)

Harry Graves practiced law with his brother-in-law, Dave W. Wilcox, for thirty-five years in Georgetown. Graves was elected to the office of County Attorney for three terms. A significant event occurred in April 1923, in which Graves played an active part, and soon after the young attorney from Taylor, Dan Moody, had been elected District Attorney.

On Easter Sunday, April 1, 1923, Mr. R.W. Burleson, a salesman from Waco, Texas, and three of his friends, Mrs. Fannie Campbell, and Mr. and Mrs. Lee Jones, all of Weir, Texas, were driving home from Jonah to Weir.

Burleson's vehicle was stopped by two automobiles, one blocking the road.

At least eight men, wearing the robes and hoods of the Ku Klux Klan, pulled Burleson from his own vehicle and forced him into a Klan automobile.

They drove him to a pecan grove near Jonah, and there, he was chained, naked, to a thorny tree and was severely beaten with a leather strap about four feet long. Following the beating, Burleson was taken to the lawn of the City Hall in Taylor, Texas, was chained to a tree, and tar was poured over his head and his bloody, beaten, body. Later, Constable Louis Lowe of Taylor testified that it was the worst beating he had ever seen.

The prosecution was headed by Dan Moody, who was assisted by attorneys R. Critz and E.H. Lawhon of Taylor, and Georgetown lawyers Harry N. Graves, Dave W. Wilcox, W.H Nunn, and J.F. Taulbee.

The defendants were tried separately.

The first trial began on September 17, 1923. It was called "one of the hardest fought cases tried in Williamson County." Charges against one man were dropped. The others were found guilty and were sentenced to prison. (4)

In the years following World War I, the Ku Klux Klan became very active. Much of their strength derived from the secrecy of their membership. A fiery cross, burning in the night, was not an uncommon sight. Hooded, robed figures kidnapped, flogged, and even killed helpless victims who were commonly from racial and religious minority groups.

This victory over the Klan was a landmark court case.

Moody, with Graves, Wilcox, Critz, Lawhon, Nunn, and Taulbee, had built an almost "irrefutable case." This was the first time in Texas, or in the entire United States, that prosecuting attorneys had won a case against the Klan. The attorneys for the prosecution were credited with "brilliant work." All became prominent in law or politics following the trials. Dan Moody became Governor in 1927, and Harry N. Graves was elected to the Texas House of Representatives in 1929. (5)

During the first term (1925 — 1927) of Governor Miriam ("Ma") Ferguson, there were rumors and reports of mismanagement on the part of her appointees to the Texas Highway Department. While these rumors were being investigated, the United States Bureau of Public Roads stopped Federal aid for Texas highways. In 1927, the incoming Governor (1927 - 1931) was Dan Moody. Through his personal efforts, Texas highways continued to receive Federal aid. In the 1920's Texas counties had not cooperated with each other in road construction.

They each had their own construction contracts and applied individually for reimbursement. Governor Moody's goal was a professional and efficient highway agency that, in time, would achieve an integrated highway system - a modern transportation network. (6)

Part of Governor Moody's vision of a modern Texas highway system included the safety of its users.

In 1930, the bill which established the Texas Highway Patrol was written by Governor Moody's former colleague in the Klan trials, Harry N. Graves, who served in the Texas House of Representatives from 1929 to 1937. (7) During Governor James V. Alfred's administration (1935 — 1937), the Texas Rangers and the Texas Highway Department were reorganized into the Texas Department of Public Safety, which remains the state's most important law enforcement agency. (8)

As a part of Governor Moody's efforts at reform and efficiency in government, Harry Graves supervised a study on improving the Texas government. He issued a thirteen volume report suggesting methods for saving the state thirteen million dollars without curtailing services. Although Graves' work was not implemented, it was "generally conceded to be a brilliant piece of work." (9)

Graves resigned from the Texas House of Representatives in 1937 to become a Judge of the Texas Court of Criminal Appeals, serving from October 1937 until his retirement on January 1, 1955. He died on December 3, 1957, and is buried in the State Cemetery in Austin. (10)

The land in Georgetown, Texas, on which a house at 1409 Olive Street was later built, was part of a large acreage first owned by George W. Glasscock, the early settler for whom Georgetown was named. In 1836, G.W. Glasscock acquired this land, described as "Fractional Block No. 39", while in the partnership, Glasscock, Millard, and Huling, which gathered headright and bounty warrants. (11)

Parts of this larger section of land, at various times, were owned by well known early settlers of Georgetown such as John T. Coffee, Dudley H. and J.W. Snyder, John J.

On January 11, 1884, Albert H. Glasscock, son of G.W. Glasscock, sold part of this land to furniture merchant, A.S. Howren (1840 - This piece of land was part of the Snyder Block 39, bounded on the north by Magnolia Street (now 13th Street), on the south by Hackberry Street (now 15th Street), on the west by Olive Street, and on the east by lands owned by Eunice A. Coffee. (12)

A.S. Howren and his wife, M.A. Howren, borrowed funds from the Georgetown Building and Loan Association to be paid to the Irvine Brothers to construct a house 42 feet long by 16 feet wide, with a wing or "T" 30 feet long by 14 feet wide, and with a height of 12 feet. The house was to be built of wooden sills, 4 x 6 inches, with lower joists, 2 x 6 inches. Studding, upper joists, plates, and rafters were to be 2 x 4 inches. It was to be weatherboarded on the outside with beveled edged siding. It was to be floored with 3/4 x 6 inch dressed tongue and groove flooring. It was to be ceiled overhead with a 3/4 x 6 inch dressed tongue and groove ceiling. Walls were to be ceiled with a rough ceiling suitable for canvassing and papering. The Main house was to be divided into two rooms with a 4-foot space between. The rear wing was to be provided with a 6-foot entry and one 14 x 24-foot room. The house was to contain seven doors (still in use in 2006) and eleven windows. (13) The Howrens agreed on a down payment of $200.00 cash and a final total of $656.00. (14)

This structure provides a fine example of an L-plan Dwelling, a vernacular house type common to Georgetown during the 1880s and 1890s. The builder of this home chose to incorporate Victorian ornamentation through a spindle frieze and a turned post balustrade. The picket fence (cypress pickets) adds further turn-of-the‑Century charm. It is one of only two structures known to Have been built by the Irvine Lumber Company, the other Being George Irvine's own home at 409 East University.

A.S. Howren and his wife sold their "present residence and homestead" to Emzy Taylor, who was a trustee for the Georgetown Building & Loan Association.

On June 9, 1915, Maude (Mamie) Wilcox, the surviving widow, gave the 1409 Olive Street property to her daughter, Darthula Wilcox Graves, who had married Henry N. Graves in 1908. The couple designated the property as their homestead, and they lived in the house until October 18, 1929. (16)

E.W. Keith and their wife, Lenita Fay Keith, sold to John W. Cardwell and his wife, Frances Cardwell on September 25, 1964.

In the 1970s, the Mugford's added a bedroom, bath, and a sun porch at the back of the main structure.

The style and materials used in the additions matched those of the older existing building. The Mugford's also added a picket fence, made of old cypress pickets collected one by one. In 2002, Marietta Mugford made extensive repairs to the house's foundation, replacing the old pier and beam with concrete piers. While the exterior was undergoing detailed repair and painting, it was discovered that the home's first coat of paint was barn red.

This report was prepared by