German immigrants began settling in the new railroad town of Taylor in the 1880s. Lutheran worship services were held as early as 1885, and the Rev. I. J. Glatzle and fourteen families formally organized this congregation in 1888. The Rev. Gus Szillat became the church's first resident pastor when a parsonage was built in 1892. A frame church building completed in 1894 was destroyed in a 1916 fire, but the congregation soon rebuilt. Worship services were conducted in the German language until the 1940s. The church remains a reflection of the town's ethnic heritage. 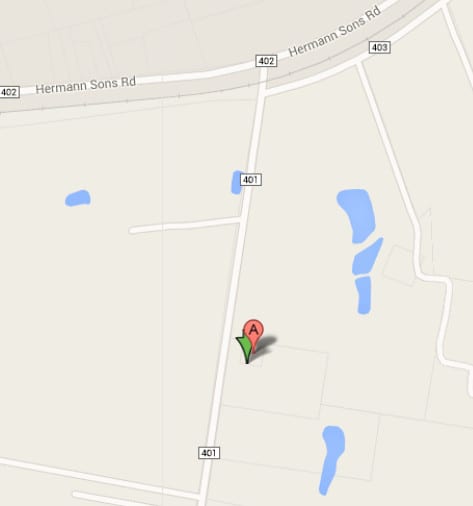 In 1876, with the coming of the, I and G N railroad, the town of Taylor (Taylorsville as it was first called) was laid out in Williamson County. During the following year, a cotton gin was built. By 1879, a newspaper was in circulation. The Missouri-Pacific railroad came to Taylor in 1882, and the town fast became a shipping center for cattle and cotton. By 1883, the town had its first public school and graduated its first class of two in 1887. Taylor boasted a national bank in 1883. (1)

The state of Texas had completed the present capitol building in May of 1888 and occupied it in September. L.S. Ross was the governor of Texas from 1886 through 1889.

(2) It was around the decade of the 1880s that many German-speaking people immigrated to this central Texas area. Most of these early settlers came direct­ly from Europe, some staying with relatives or friends (Pflugerville, Dripping Springs, and Dessau among some of the places) until they could settle in their own homes. Most came with a desire to be able to own their land. Some had heard of the Blackland Prairies of central Texas which grew good cotton and grain, much of which was still unbroken and for sale. (3)

Immanuel Lutheran Congregation, also known as "West Taylor", located on County Road 404, just off of Highway 79, 1&1/2 miles west of Taylor, had its early beginnings as early as 1885, meeting in homes and in Tyler school. The Rev. I.J. Glatzle (1854-1921), born in Wurttenberg, Germany, received his theological education at ST. Chrischona in Basel, Switzerland. He came to Texas in 1883 at the age of 29. (4) Under his guidance, Immanuel Lutheran Congrega­tion adopted a constitution on January 1, 1888, which was signed by fourteen men who agreed to accept financial responsibility and support of the church thus becoming one of the first Lutheran congregations in Williamson County. The official name adopted was "German Evangelical Lutheran Immanuel Church". Fourteen fami­lies signed the original constitution and within the year sixteen additional families joined the congregation. The church served not only German Lutherans but also Lutherans of other nationalities. (5)

On October 16, 1889, five acres of land was purchased for $100 from A. Symes, located in the J.C. Eaves Survey, just west of Taylor, Williamson County, Texas.

The trustees completing the transaction for the congregation were: Alexander Anderson, Fritz Ludtke, Heinrich Fritz, Julius Krueger, John Wuthrich, Sr., and John Wuth­rich, Jr. (Herman Lantzsch, the first secretary of the congregation was unable to be present.) The land was to be used as a site for a church building and as a place of Sepulture. (6) Rev Glatzle and Rev. John Daude held services for the congregation once a month, usually making the trip by walking along the railroad or riding horseback. (5) In 1890, Rev. John Doerfler accepted a call to serve Bartlett. At this time he also served Immanuel, holding services twice a month.(7) With the completion of a parsonage in 1892, Immanuel had its first resident pastor, Rev. Gus Szillat (1863-1950), born in East Prussia, Germany, and educated in St. Chrischona, Switzerland. He came to Texas in 1892, at the age of 29. (4)(8) The construction of a frame church, completed in 1894 at a cost of $1525.00, soon followed. (5)(9)

In 1915, a. fire destroyed the parsonage and within the year it was rebuilt.

During the early morning hours of Jan. 1, 1916, a fire also destroyed the sanctuary and the garage a few hours later. Most of the church records were lost. All signs pointed to arson.

The buildings were immediately replaced.

In August of 1916, the present church was dedicated.(2)(9) By 1949, due to the need of add­itional space, the congregation purchased the larger portion of Yakey School and moved it to the premises to serve as an annex for additional seating area and for Sunday School class rooms. Other improvements through the years include: electricity in 1937, a speaker system in 1967, a Christian Educational building in 1980, air conditioning in 1983, and in 1985, thematic stained glass win­dows replaced the old multi-colored stained glass panes. In 1985, Gilbert Fritz gave fifty feet adjoining acreage to the south and following his death, Anna Fritz Walker gave an additional adjoining fifty feet to the church in memory of her brother, Gilbert.(9) Both are grandchildren of Alexander Anderson and Heinrich (Henry) Fritz, charter members of the congregation.

Worship services were held in the German language in the be­ginning.

In the mid 1920's, it became an issue since all of the younger and many of the other members spoke English. Beginning in 1930,(9a) services were conducted in both English and German with English being used exclusively for Sunday School and confirmation instruction. Use of the German language gradually diminished until 1946, when it was no longer used.

As soon as Immanuel Lutheran Congregation organized in 1888, it became affiliated with the First Evangelical Lutheran Synod of (10a) Texas (organized in 1851). In 1896, the Texas Synod joined the

Iowa Synod (organized in 1854) but kept its original name.