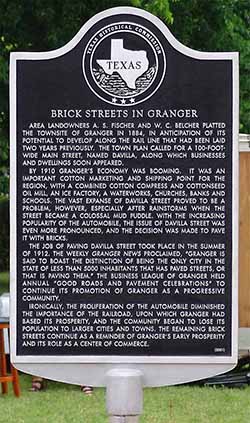 Dedication Ceremony Historical Marker for the Brick Streets of Granger.

Area landowners A. S. Fischer and W. C. Belcher platted the town site of Granger in 1884, in anticipation of its potential to develop along the rail line that had been laid two years previously. The town plan called for a 100-foot-wide main street, named Davilla, along which businesses and dwellings soon appeared. By 1910 Granger's economy was booming. It was an important cotton marketing and shipping point for the region, with a combined cotton compress and cottonseed oil mill, an ice factory, a waterworks, churches, banks and schools. The vast expanse of Davilla Street proved to be a problem, however, especially after rainstorms when the street became a colossal mud puddle. With the increasing popularity of the automobile, the issue of Davilla Street was even more pronounced, and the decision was made to pave it with bricks. The job of paving Davilla Street took place in the summer of 1912. The weekly Granger News proclaimed, "Granger is said to boast the distinction of being the only city in the state of less than 5000 inhabitants that has paved streets, or that is paving them." The Business League of Granger held annual "good roads and pavement celebrations" to continue its promotion of Granger as a progressive community. Ironically, the proliferation of the automobile diminished the importance of the railroad, upon which Granger had based its prosperity, and the community began to lose its population to larger cities and towns. The remaining brick streets continue as a reminder of Granger's early prosperity and its role as a center of commerce. (2001) 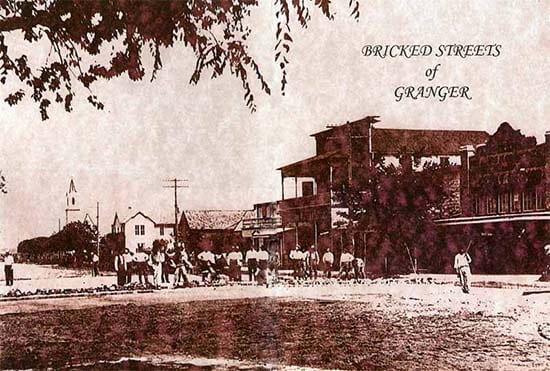 Once upon a time, in the distance "long ago," a bustling, thriving community blossomed amid the tamed prairie of this heartland of Texas. The stalwart pioneers who founded it in 1884 called it Granger and proceeded to erect along the town's proposed avenues some of the most opulent architecture of that era. Pillared mansions sprouted throughout the fledgling hamlet. Grandiose structures soon lined the main thoroughfare of the business district. It is this thoroughfare, the wide, expanse artery coursing through the township - East/West Davilla (or at least a segment of it), that is the subject of this narrative.

Men of vision and discerning tastes, the founding fathers, in planting the original town, had allocated a grand width of 100 feet to this "Main" street and eventually extended its length westward, across the railroad tracks when the Walton Addition to the City came into being. However, it soon became apparent that the avenue's vast width had its drawbacks and was almost impossible to traverse in rainy weather when it virtually transformed itself into a giant mud hole.

The railroad had come to town; a post office had been established, King Cotton ruled; a combined oil mill, ice factory, and waterworks system had been built. With the advent of the automobile, it became evident that the un-traversable river of mud that was "Main" street was the only thing stopping Granger from being the progressive city it wished to be.

Since "nothing but the best" seemed to have been the motto of those early pioneers in all their endeavors in the establishment of their town, that same thinking prevailed when they addressed the problem of the muddy main thoroughfare.

In typical style, they assumed the formidable task of bricking the immense width and length of their grand avenue, for its westernmost end, over the railroad tracks to the east, totaling more than 2500 feet in length and 100 feet in width.

Once again, the founding fathers succeeded grandly! They were men of strength and fortitude who dreamed impossible dreams and forced those dreams to reality.

They are no more, and only fragments remain of their dream and of the opulent township that was their Granger in the early years of this century. So in 1912, Granger announced plans to pave the thoroughfare with bricks during the summer months. The Granger News, the weekly newspaper, stated that "Granger is said to boast the distinction of being the only city in the state, of less than 5000 inhabitants, that has paved streets or is the process of paving them. The Business League of Granger is promoting the enterprise. The Business League promoted it by hoarding a Street Paving and Good Roads Celebration! The township continued to have yearly such celebrations, attended by hundreds of visitors who came by rail and by automobile to view this "one of the best towns in the county" that promoted itself as a "railroad town" and a progressive "Paved Street Town."

Today very little remains of the Granger that was "once upon a time.”

Most of the historically significant buildings and mansions have been lost to demolition, fires, or simply the ravages of time. Recent efforts at the preservation have brought RTHL markers to several of those that remain, and those efforts continue. This application for historical recognition of the remnant that remains of the once-grand brick avenue is part of that continuing effort. That small-segment, approximately a block and a half of West Davilla Street that remains un-tarred and unpaved, is all that is left to bear witness to an era that is no more visible proof of a time and place in the history of a community that was real and viable. Granting a historical-marker statue to a few hundred feet of the brick street in itself is insignificant. The true value in such a designation lies in the recognition and affirmation of the efforts of those early pioneers and the township they created, validifying the most basic fact: that they once lived and built a grand community. Without such recognition, their era will be lost to history, as if they and the town they founded had never been.

The history of bricked Davilla Street begins long before its actual conception and construction in 1912.

Its history is rooted in the long, long ago, in the midst of the first hardy pioneers who answered the call to settle a nation, to tame the prairie that would one day be the State of Texas. Its history lies in the toil and blood sweat of those who were destined to transform that prairie into the lush, fertile farmland that surrounds the township.

Its history continued through the early 1800s when one A.S Fischer acquired some 2000 plus acres of prairie in this area, who in 1884 laid the groundwork that would provide the site for grand Davilla Street's reality. In that year of 1884, Fischer sold "for valuable consideration, received and acknowledged" one-half interest in 175 acres of this prairie to on W.C. Belcher. Together the two men formed a partnership and platted a town to be called Granger. The result was the original Town of Granger, consisting of 58 blocks. Later, W.H. Walton of Austin, who owned vast acreage to the west of this original township, platted the Walton Addition to the City of Granger. Such turns of events set the stage and provided the setting for the subject West Davilla in the Walton Addition and East Davilla in the Original Township of Granger. But before the street came to brick being, the platted lots had to be sold, homes constructed, water systems installed, etc.

Seemingly, the available lots were quickly purchased in record numbers.

The railroad had come and with it prosperity to the local citizenry. They, in turn, started various business enterprises and built opulent buildings in which to house them along the vast muddy expanse that was Davilla Street at that point in time. That particular situation is aptly described by Ed Hruska in his written account, "My Recollections of Granger in 1908". In these recollections, he recounts the following: "When we moved to Granger in 1908, there were no graveled or paved streets or cement sidewalks. A few streets were topped with cinders from the oil mill, which they regretted Cater because the acid in the cinders destroyed that water pipes in no time. What sidewalks there were, were built of lumber, and even most of the business places only had boardwalks in front of their stores. At every intersection, there were largely flat, white limestone rocks placed about one foot apart on the ground in all four directions, and you would step from one rock to another in order to cross the street in bad weather. Of course, you could wade through knee-deep mud and water if you prefer. It was not until-1912 that Main Street (Davilla) was paved (bricked)".

As stated earlier, these conditions of mud and mire prompted the populace to ponder on how to go about rectifying this blight on their otherwise beautiful township.

By this time, many of the town's most historic edifices were already in place. On the west side, the SPJST Fraternal building was erected in 1909, as well as the OR Bartosh building in the N/W corner of the intersection of Davilla and Rio Grande Streets. On the east side of the tracks, along muddy Davilla Street, the red granite first National Bank and the majestic Storrs Opera House already stood in majestic splendor. Thus, the far-visioned city fathers decided that bricking that vast and muddy expanse would be the ideal solution. Records indicate that this project was completed in 1912- another seemingly impossible dream realized with seemingly uncanny ease.

For many eras thereafter, bricked Davilla Street basked in its splendor, a jewel surpassed by a few of its ilk in the entire State of Texas.

But with each ensuing generation, its historical value was less and less appreciated and vastly diminished. Waterline repairs gouged ugly ruts along its path. In 1968, with the inception of FM 971, the upkeep and maintenance of its east end fell to the care and maintenance of the State Highway Department, who promptly decided to tar and paved the thoroughfare. Maintenance of the rail tracks caused additional paving over of the historical brick underlay. Today, only 600 or so feet on the west side retain their original brick facade. It is this small segment and its survival that is deserving of historic designation. Today, efforts are underway to uncover the original brick street in its entirety. An impossible task? No! Not if we, the present populace, have one-tenth of the grit and daring-do of our forefathers who took on the far more formidable task of the bricking in the first place. We owe it to them and to ourselves and to our posterity to restore their legacy to its former grandeur. We who destroyed it have the corresponding responsibility to restore it. Are we equal to this task.? Only time will tell, securing Historic designation for the fragment that remains s but the first step in the task that lies ahead.

From the street's viewpoint, how heavy the weight of the tar that covers its being must be, how suffocating, how demeaning, how degrading to the pristine bricks which carry a load of degradation to the self, silently and patiently, awaiting the day when a new generation will surface, one that is equal to the legacy of the one who had the vision and fortitude to construct it. Are we that generation? I hope so. I sincerely hope so, because we are the last generation who still remember this street as it was. If we do not bear witness, the generation that follows will never know its historic heritage.

In applying for marker status for this remaining segment of bricked Davilla Street, we are attempting to transmit that historical heritage to the generations that follow.

Author of this narrative: the late Loretta Skrovan T Mikulencak

for more info and pictures click on Granger, Texas

for the Bricked Streets of Granger.

This day is dedicated In loving memory of Loretta Skrovan Wikulencak who so faithfully and diligently worked to secure this Texas Historical Marker as granted by The Texas Historical Commission, Austin, Texas. 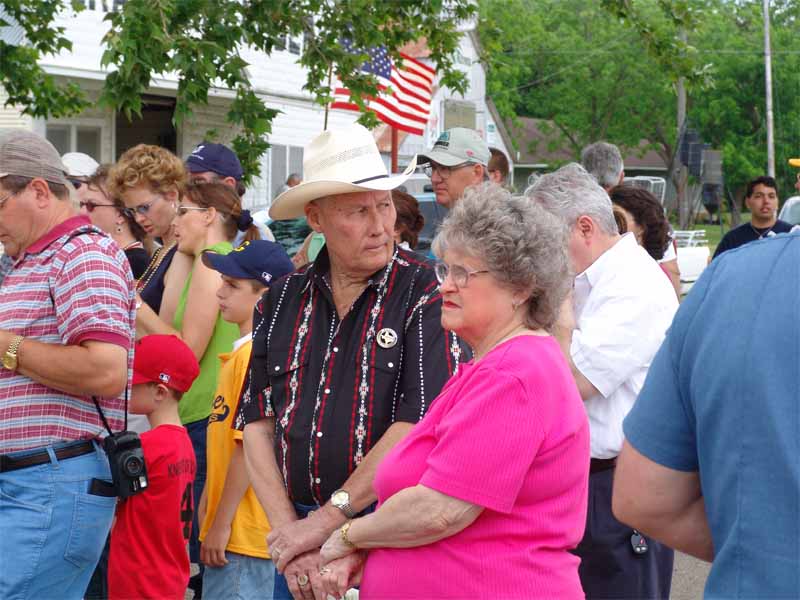 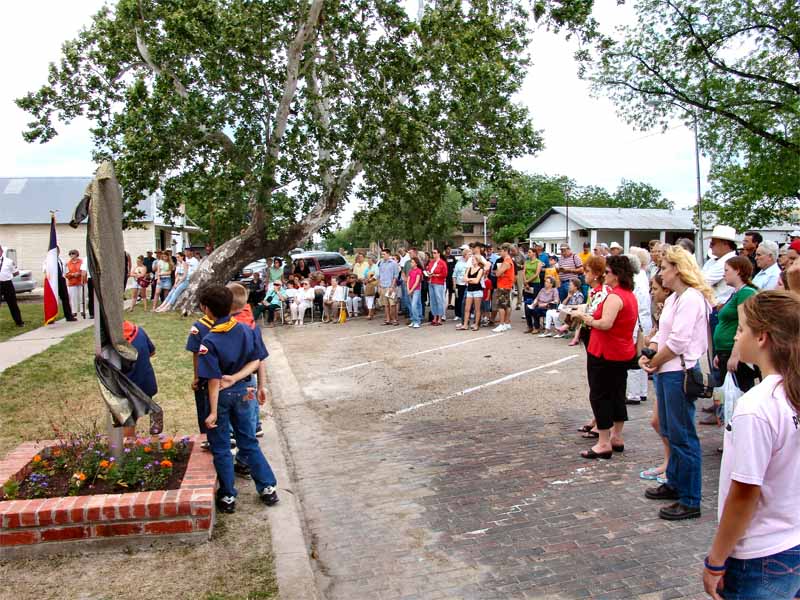 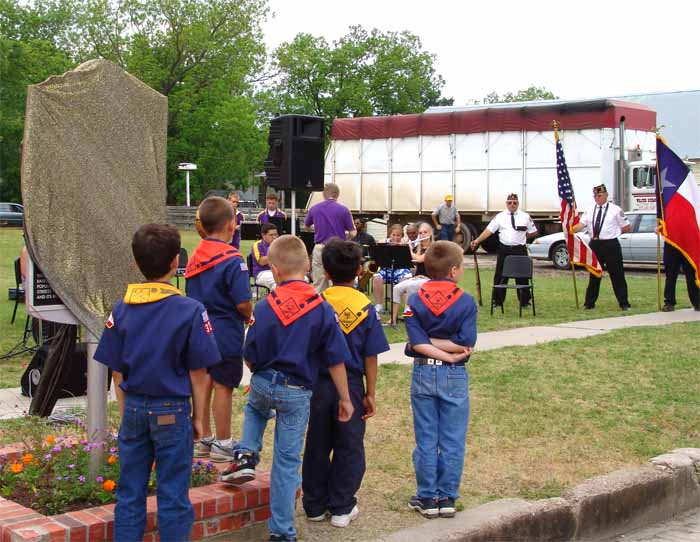 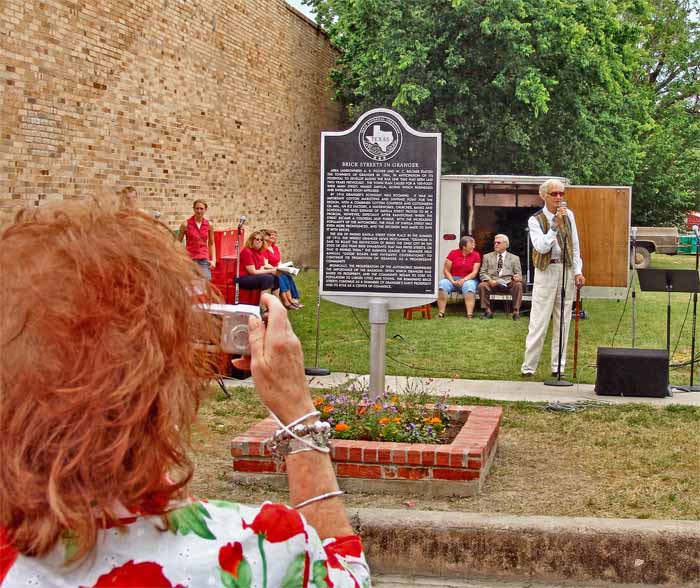 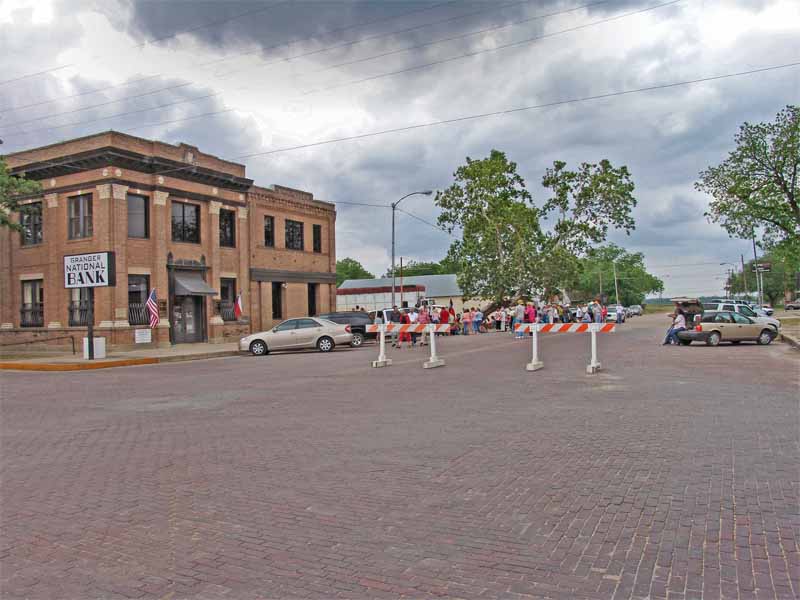 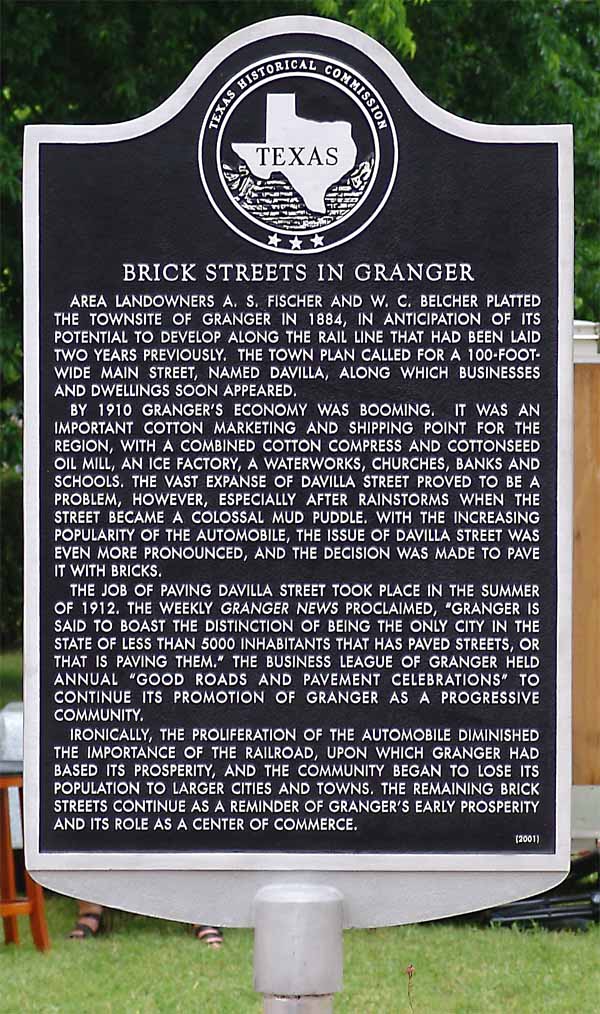 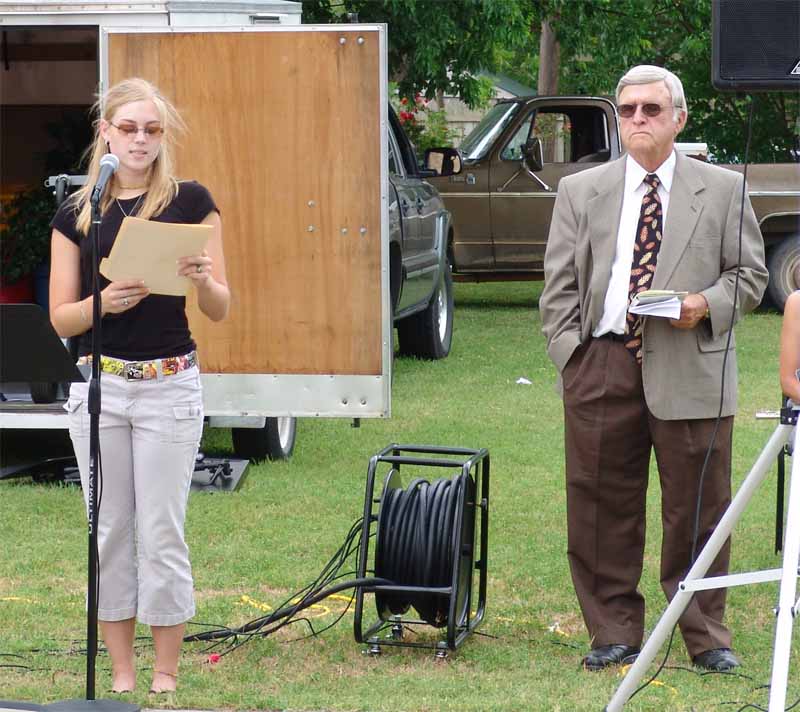 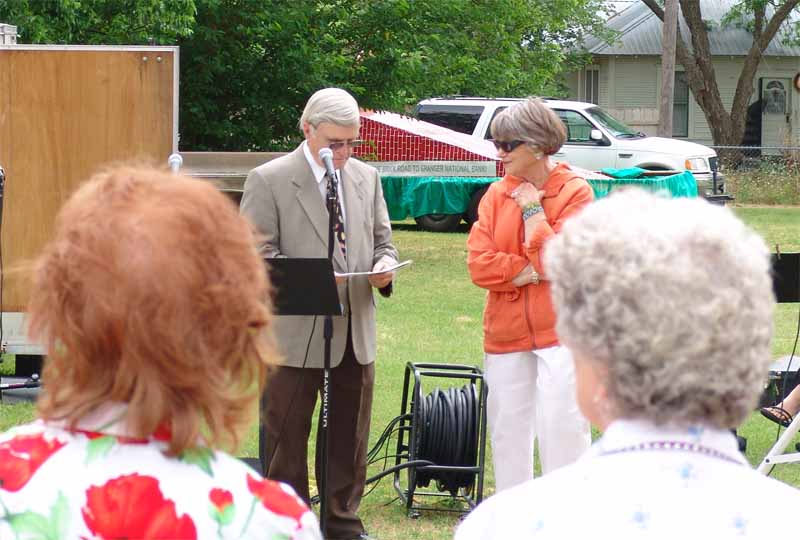 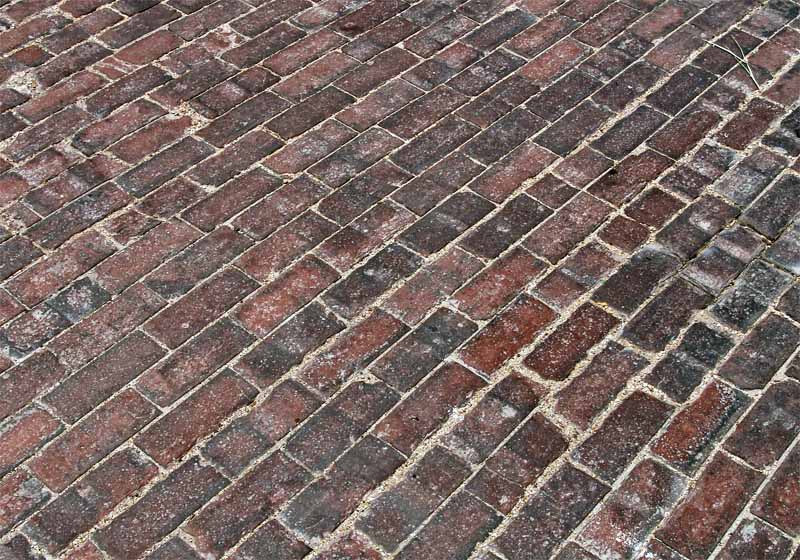 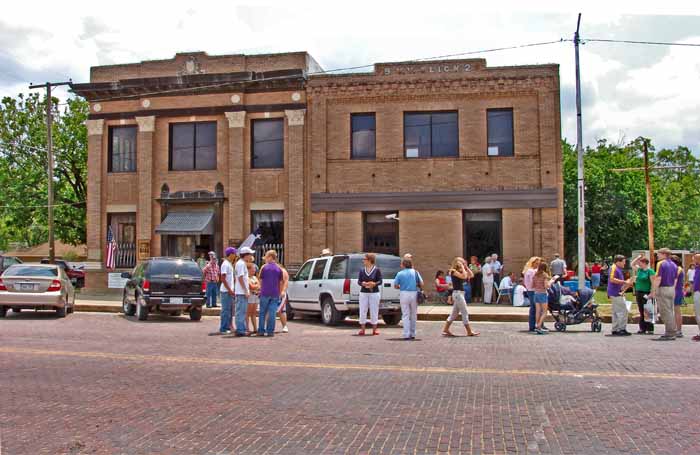 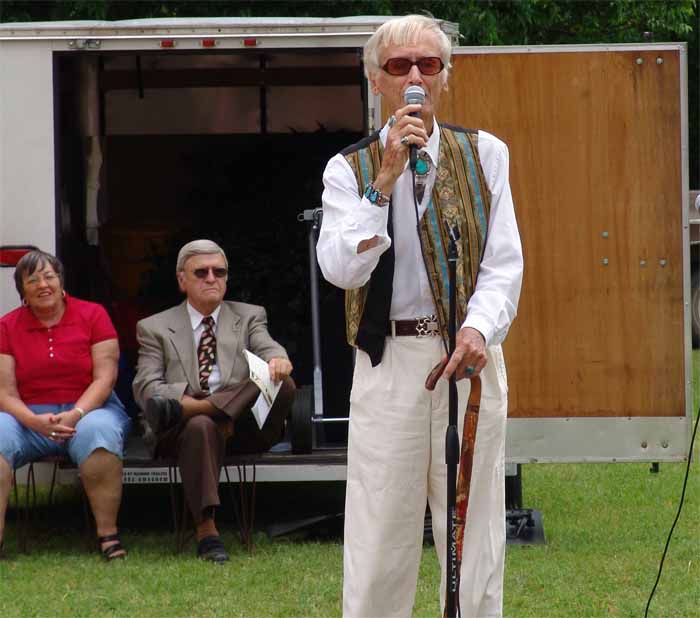 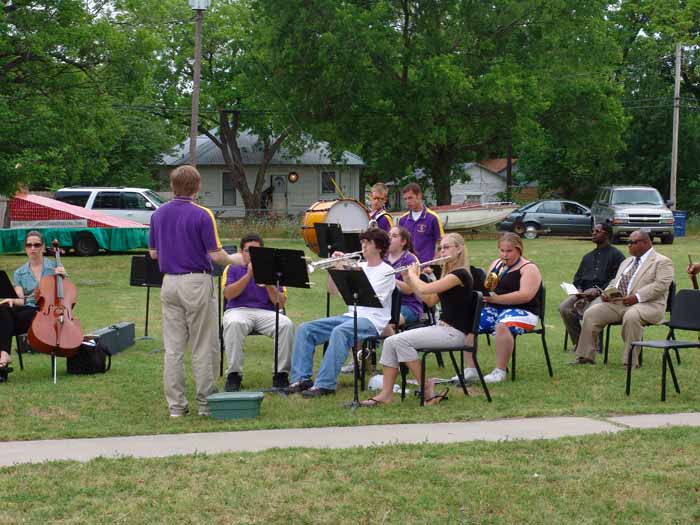