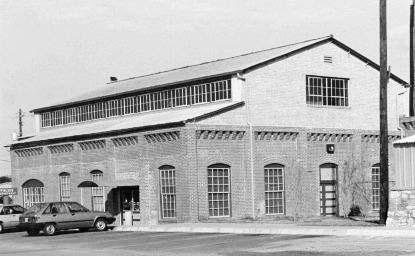 The Georgetown Light and Water Works Building faces west on West 9th Street near the central business district of Georgetown, Texas. The 1-story industrial building is covered in a flat roof while the larger 2-story portion is covered by a two-tiered metal gable roof. Windows in the 2 story part are large 12/12 double-hung wooden windows and a steel sash multi-pane clerestory between the first and second tiers. A tall concrete smokestack rises at the southeast corner of the building adjacent to a stone fence now incorporated into a metal warehouse building. The property is devoid of landscaping.

The Georgetown Light and Water Works Building faces west on West 9th Street near downtown Georgetown, Texas. The red brick building consists of 1-story and 2-story sections and a tall concrete smokestack at the southeast corner. The 1story portion is along the northern part of the building and is covered in a flat roof The 5-bay (west elevation) by 4bay (south elevation), 2-story section sits along 9th Street and is covered in a large two-tiered metal gable roof. Second, third, and fifth bays have 12/12 wooden double-hung windows below a brick arch. The first contains a multi-light window and the fourth bay double wooden doors. An awning covers the approach to this doorway. On the south elevation, 12/12 wooden windows highlight the first, second, and fourth bays, while the third bay consists of a single wooden door with an enclosed transom. A large steel sash clerestory separates the first and second tiers of the roof. Another multi-light steel sash window opens from the upper south gable end. All elevations are noted with brick corbeling at the cornice line of the first story.

Alterations include the adaptation of a stone fence to the foundation of a metal warehouse building south of the principal building. The property was rehabilitated in 1985-86 and is now reused as a police station and is so indicated with a freestanding sign at the northwest corner of the property.

The Georgetown Light and Water Works Building (ca. 1911) is a 1- and 2-story brick industrial building near downtown Georgetown.

The property is the only intact industrial building over 50 years of age in the community. It is nominated under Criterion C in the area of Architecture at the local level of significance as the best remaining industrial building. The property is associated with the multiple listing: Historic Resources of Georgetown, Texas (NR 1986). The building retains its integrity and is being reused as a police station.

The Georgetown Light and Water Works Building (ca. 1911) is west of the central business district of Georgetown. The building and environs constitute the city's earliest efforts to provide electricity and water to its citizens. Its arched 12/12 wooden windows and corbeled cornice line make it a distinctive industrial building. A large concrete smoke stake further denotes its historic use.

In 1936 the city supported a bond election to make improvements to the plant. The bond initiative passed and in July 1937 work was completed. A new diesel engine and additions made the plant one of the best city utilities in the state. (Williamson County Sun).

The property was rehabilitated in 1985-86 to be reused as the city's police station. It is in good condition and retains its integrity as an industrial building. Thus, the Light and Water Works Building is the best example of industrial architecture in Georgetown.
view more on the