Narratives from the Georgetown's Yesteryears Books

A special thanks to The Georgetown Heritage Society and Martha Mitten Allen for letting the Commission post these wonderful first person stories.

We hadn't ever had electricity in the country 'til, well, I'd say middle of 1939 or 1940. Everybody got electricity all over the country. The high lines began to be built out here. We did away with the old ice boxes and bought us some refrigerators, and things sure looked up after that. I think I lived on ice cream.

I don't believe there was any electricity out in the country until nineteen and thirty-eight or forty, somewhere in there. The idea that you could get iron and plug it in the wall and iron whew! I have a couple of what they call sad irons, and when my granddaughter was little, she found them, and she said, "Nanny, what in the world is this?" And I said, "Well, honey, that's an iron." "Well, where did you plug it in?" I said, "They didn't heat by electricity." She said, "What heated it, then?" I tried to tell her that we had wood cook-stoves, and when we wanted to iron, we just built a fire in the cook-stove and heated them on top of the stove.

The thing that makes me feel the richest, let's put it that way, is to be able to fill the washing machine with your clothes and start it, and turn on the dishwasher and start it, and sit down and read. That really makes you feel like you are getting somewhere.

Then I came to the power plant as a fireman for the boilers. We had three 250 horse [power] boilers and three engines and one Skinner 500 horse engine, and we had two newer engines that were 100 horsepower. I worked in the power plant, then for six months as a fireman, and then I went to the engine room. Then about 19 and 40 somethin', why, we put in two more diesels, 260 horsepower, six cylinders. Then we got overloaded, and we put in a 750 horsepower, five-cylinder diesel. Then in the '40s somewhere, our load got too heavy . . . The town was growing every year, you see.
I worked down here at the power plant then, about fourteen years. I worked from twelve o'clock midnight till eight the next morning. Six years of that time, we didn't have a vacation. We just swapped work and got off a day or so. And then, a little later, the chief engineer died, and Mr. Boyd, who was assistant engineer then, took over as chief engineer. And then he passed away; I was assistant then. I went to work daytime, eight till four. And in '42, our load got so heavy—so many washing machines, so many iceboxes—load just kept building up. And when we closed the plant down, our peak load was 900 kilowatt-hours. That's all we could pull, and the load was getting too heavy.
So, the city manager, who was B. H. Cruz at that time, he and I got together and figured that we could buy engines and make our own electricity for seven mils a kilowatt, but it would cost us around half a million dollars to buy the engines, build the building to put it in. And about the time we'd get that one paid for, why, we'd have to buy another one. The town was still growing, you see. Mr. Cruz and I got to dickering around with a company, the LCRA, to be exact. Mr. Cruz and I got to figure that we could buy at the same price, seven million, from LCRA, and we would still retain our distribution system, with the transformers over here west of town, on the Liberty Hill road.
We're tied into the Possum Kingdom circuit and the LCRA circuit. If something goes wrong in Austin, we can throw the switch the other way and get it from Mineral Wells 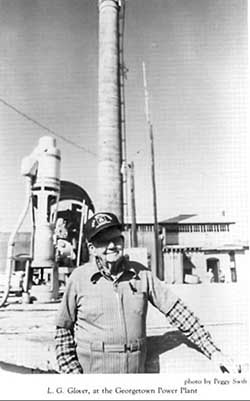 view other stories of Williamson County