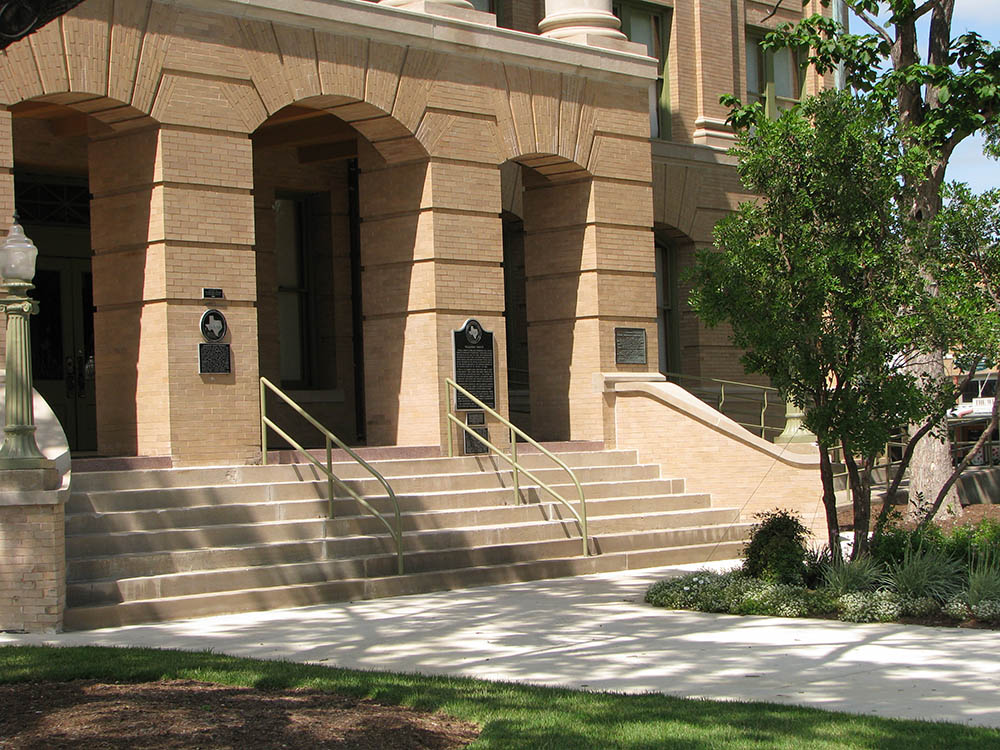 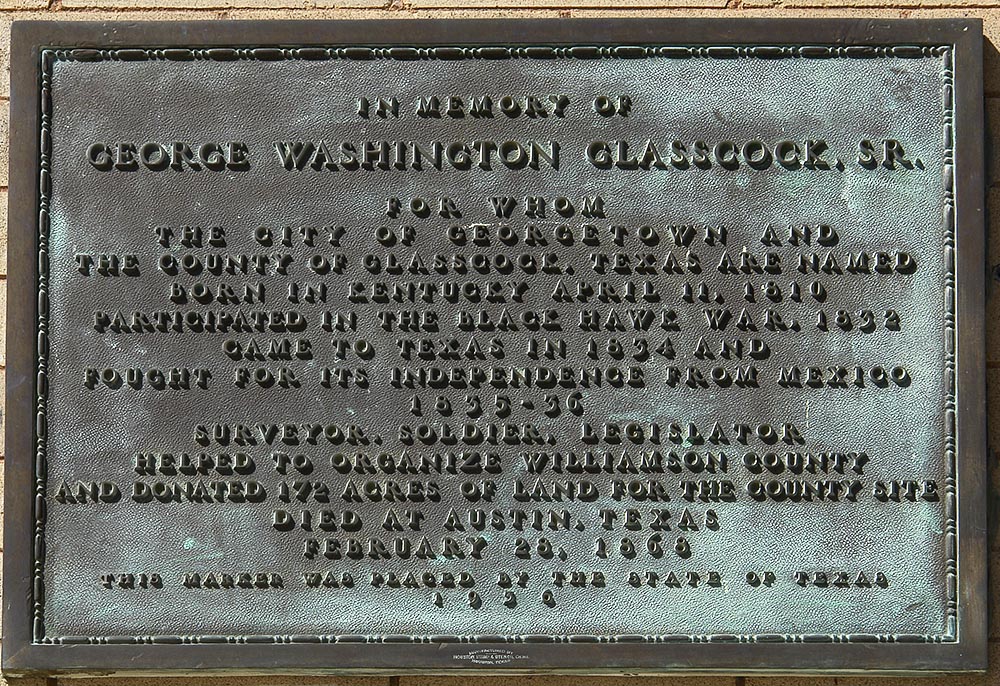 In Memory of George Washington Glasscock, Sr., for whom the city of Georgetown and the county of Glasscock, Texas are named. Born in Kentucky April 11, 1810. Participated in the Black Hawk War, 1832. Came to Texas in 1834 and fought for its independence from Mexico 1835-1836. Surveyor, soldier, legislator, helped to organize Williamson County and donated 172 acres of land for the county site. Died at Austin, Texas February 28, 1868.

Mounted on the Williamson County Courthouse

Georgetown, the county seat of Williamson County, is on Interstate Highway 35 and the San Gabriel River in the center of the county. It was founded in 1848 and named for George Washington Glasscock, who, with his partner, Thomas B. Huling, donated land for the site. Pioneers were attracted by the abundance of timber and good, clear water, as were the Tonkawa Indians, who had a village there. In addition, the land was inexpensive and extremely fertile. The first wave of settlers was from Tennessee, Kentucky, North Carolina, Arkansas, Illinois, and other states. Swedish settlers came by the 1850s; after 1870 German, Austrian, and Swiss settlers began arriving, and after 1880 Moravian and Czech. A few blacks came with early Anglo families, and migration from Mexico began about 1910.

The establishment of Southwestern University in 1873 and the construction of a railroad in 1878 contributed to the town's growth and importance.

A stable, healthy economy was based largely on agriculture, and a major tributary cattle trail led through the heart of Georgetown to the Western, Chisholm, Dodge City, and Shawnee trails. The Williamson County Sun, founded in 1877, continued publication in the 1990s. Industry prior to 1900 included limestone quarries; grist, flour, planing, and woodworking mills; cotton gins; brick, flue, chair, and mattress factories; tin, pewter, blacksmith, saddlery, and shoe shops; a knitting mill, bakeries, and confectioneries; the Texas Chautauqua Assembly, a bottling works, and an old mill. Between 1891 and 1960 master builder Charles Sanford Belford (1857–1929) and his heirs operated a lumber yard and built many fine homes and other structures that are still in use. Well, known among cattlemen of Texas and the nation were Dudley Hiram Snyder, John Wesley Snyder, and John Sparks, residents of Georgetown in the cattle-drive years.

Cotton production became dominant in the area from the 1880s to the 1920s, after which crop diversification was practiced.

The Georgetown and Granger Railroad was completed in Austin in 1904. Extensive loss from a 1921 flood led Georgetown to seek flood control, an effort that culminated in the building of a dam to impound Lake Georgetown, which opened officially on October 5, 1979. An unlicensed radio station appeared briefly in the 1930s, and Radio Station KGTN opened in 1962. Population growth and industrial expansion continued modestly in the twentieth century until about 1960 when residential, commercial, and industrial development greatly accelerated. Since then adaptive restoration has been widely practiced, with special emphasis on a Main Street program and private restoration of older homes. Also since then, Georgetown has added several heavy manufacturing plants, light and cottage industry, and crushed-stone quarries; parks at Lake Georgetown and in the center of town; retirement and nursing homes; a new hospital; low-cost housing that has been a model for similar projects over Texas; Mood-Heritage Museum; a public library; and Inner Space Cavern. The population in 1980 was 9,468, and 4,500 more living in the area. In 1990 the population was 14,842, and in 2000 it was 28,339.