Family in front of house with horse and carriage. A nearby mill on the San Gabriel River, for which the town was named, served Chief Yellow Wolf of the Comanche's, as well as farmers from over 100 miles away. 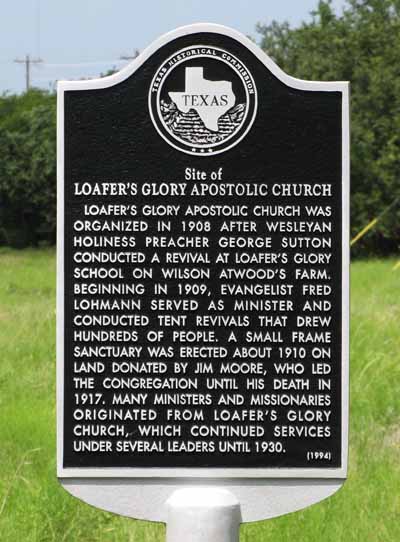 Loafer's glory apostolic church was organized in 1908 after Wesleyan holiness preacher George Sutton conducted a revival at loafer's glory school on Wilson Atwood’s farm. Beginning in 1909, evangelist Fred.
Lohmann served as minister and conducted tent revivals that drew hundreds of people. A small frame sanctuary was erected about 1910 on land donated by Jim Moore, who led the congregation until his death in 1917. Many ministers and missionaries originated from loafer's glory church, which continued services under several leaders until 1930.

Samuel Mather settled here in 1849, building a grist mill on the North San Gabriel in 1852. John G. Stewart opened a store near the mill. A small log cabin was in use by 1854 for church, school and lodge meetings. A post office was established in 1858, Mather being postmaster. W. L. Brizendine owned the mill by 1865, adding a cotton gin. Known as Mather's Mill, Brizendine Mill, or Gabriel Mills, the village thrived until Austin & Northwestern Railroad bypassed it (1881); then a decline began. The post office closed in 1905, and by the 1920s the town itself had disappeared.

Marker is reported missing in 2016;
Google map shows marker in 2011

Once-thriving community on the North Gabriel, site of the early mill known variously as Mather Mills, Gabriel Mills, or Brizendine Mills. Englishman Samuel E. Mather settled there, 1849, built a water-powered grist mill near the present low water bridge. An early customer was Chief Yellow Wolf of the Comanche's. Mather also did blacksmithing, and the Chief brought him some silver ore to be made into ornaments, offered to lead him to the ore "three suns to the west," which Mather declined. John G. Stewart and their family left Tennessee for Texas in 1851, had their horses stolen by Indians in Houston, finally reached Gabriel Mills on March 5, 1852. The Stewart women took their muskets when they did the family wash in the San Gabriel River. When serious threats of Indian attack were rumored, the women and children were moved to Fort Black twenty-five miles up the North Gabriel until the danger was over. William Williams built a log room with a stone fireplace in 1852 between Gabriel Mills and Loafer's Glory, later added another room and eight-foot dog run between, lean-to on the back, loft room above and a front porch; the building was restored and bore Texas Historical marker in 1973. In Sep­tember 1853, Samuel Mather, William P. Rich, Isaac M. Brown, C. A. Russell, Winslow Turner, Robert G. Rice, and M. S. Skaggs applied for Masonic Lodge, chartered early the next year as Mount Horeb No. 137 at Gabriel Mills (moved in 1915 to Mahomet, Burnet County), In July 1854 "a heavy freshet" washed away the mill "with Lodge Room," after which meetings were held in a log church-schoolhouse built-in 1854. "The floor was of black dirt, the seats were made of logs split open in the center, the rough splinters being hewn off with a broad-ax, the roof was of oak boards, split with froe and mallet."

Sam Mather rebuilt his mill, this time equipped to produce flour as well as cornmeal.

"People came seventy to one hundred miles to have their wheat ground into flour. At times the mill house was piled from top to bottom with wheat with scarce room to get around, and sometimes it took several weeks for a person to get his grinding done." John Dunlop, Jonathan Bittick, W. L. Brizendine and N. L. Davis also owned or operated the mill. The Mount Horeb Lodge in 1856 built a two-story frame structure to be used by Mount Horeb School, Mount Horeb Church, and for lodge meetings. Since the town was near Comanche tribes, guards were stationed outside the Lodge to keep horses from being stolen, and meetings were on Saturday nights before each full moon so that those living long distances away could see well on their return trip home. During the 185os, members came from as far as sixty miles. M. S. Skaggs was killed and scalped by Indians in 1859.

"Grandma" Brizendine owned a fine hack, which for many years she made available to anyone in the community needing it for a funeral service. Postmasters at Gabriel Mills were Samuel Mather (1858), Ed­mund Crim (1863), H. T. Norton (1864), John R. Brizendine (1870 to 1905, when the office was closed).

William Scheyli, a fine young German craftsman, lived in the community, designed and built the Mount Horeb Methodist Church in an oak grove on a bluff of the river in 1860. Scheyli built his own distinctive home on a hill overlooking the village, with a basement, large rooms on the ground floor, an attic, and a steeple on top. What impressed the community most, however, was a well inside the house where water was drawn up by rope and bucket. Cabinetmaker Brizendine, who came in 1865, ran the mill, added an early cotton gin and wool and cotton carding machines, had an active role in the business ventures of the village. In 1893 a bridge across the North Gabriel was dedicated to a festive program, oratory by politician "Cyclone" Davis, and a barbecue dinner. By 1911 Jasper William "Will" Asher ran a blacksmith shop near the gin, and his wife ran a telephone exchange in their home. Tom Seldon Reed taught school at Connell; his three sons, Dave, Malcolm, and Tom, became successful businessmen, starting in cotton and cedar busi­nesses. Dr. C. L. Simmons practiced medicine there. Physician Charlie Root, teachers Paul Root and Harold Asher, and professional baseball player Charley "Hulda" Mather, great-grandson of Samuel Mather, were among successful professional people. One of Gabriel Mills' best-known citizens was Andrew "Andy" Mather, son of pioneer Samuel Mather.

Andy was born there in 1851, grew to a six-foot four-inch height, had the "carriage of a man of the range [and was] nowhere more at home than on the back of a good horse."

After some years as an Indian fighter, in 1875, he joined the Texas Rangers under Captain Jeff Maltby. Andy Mather was rarely seen without his spurs on. He wore a large, wide-brimmed hat, the best he could buy; his hair usually hung to his shoulders, and his trousers were tucked into his boots. A few years prior to the death of William F. "Buffalo Bill" Cody, who died in 1917, "the old scout was on a visit to Georgetown, and he and [Andy Mather] talked long of their experiences" as they sat together in front of the Courthouse. "They looked very much alike, Mr. Mather being considerably the larger of the two, but their eyes, form of dress, and flowing hair made a very striking resemblance. A friend noticed them talking remarked, "There's something between those old boys, isn't there?" Gabriel Mills remained a thriving town for a decade or more in the twentieth century, but when a fire destroyed the Lodge and schools were consolidated, the rural population began moving away. The entire village disappeared within a few decades. Even the old bridge, damaged beyond repair by a flood in 1957, had to be torn down. Now several sizeable cemeteries are the only landmarks re­maining of a pioneer village that had risen on the site on Indian mounds.