“Loafers Glory Apostolic Church was organized in 1908 after Wesleyan Holiness Preacher George Sutton conducted a revival at Loafers Glory school on Wilson Atwood’s farm. Beginning in 1909 evangelist Fred Lohmann served as minister and conducted tent revivals that drew hundreds of people. A small frame sanctuary was erected about 1910 on land donated by Jim Moore who led the congregation until his death in 1917. Many ministers and missionaries originated from Loafers Glory Church which continued services under several leaders until 1930.”

(All traces of the church and community are gone but their existence is remembered in farm landmarks: Tabernacle Draw, Tabernacle Trail, and Loafers Glory Trail.) 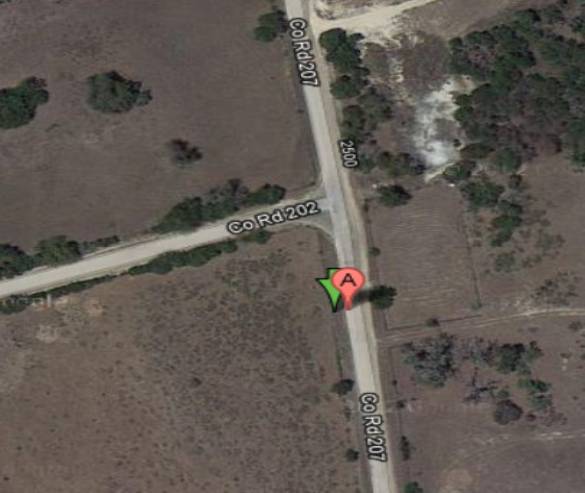 Loafer's Glory Apostolic Church in the small community of Loafer's Glory was located one mile south of Mount Gabriel (Pilot Knob) in the northwestern corner of Williamson County. This frame structure was located off present US 183 in the southwest corner of the inter­section of County Roads 202 and 207. Used primarily as a place of worship, it also became a gathering place or community center and was later known as "The Shed. [1] [2]

Like other families who settled in this area, those at Loafer's Glory were, for the most part, devout and God-fearing Protestants. Like other early settlements where education generally took priority over religion, the first public building to be raised at Loafer's Glory was a school. [2] Though no official records exist, Loafer's Glory school is believed to have been the same as Concord school, which was relocated several times. [1]

In 1908, Wesleyan Holiness preacher, George Sutton, was asked to hold a revival meeting in the little schoolhouse, at that time located on the Wilson Atwood farm. [2]In his book, Sinner to Saint, Sam Sutton reports the success of that gathering during which many found salvation and others were alleged to have been cured of various afflictions. [3] This meeting leads to the establishment of a Holiness church in the community. [2]

Services were held in the schoolhouse until the building was destroyed by fire about a year later.

The congregation, later called Loafer's Glory Apostolic Church, continued to meet in various homes in the community. A tent meeting held in the summer of 1909 further solidified the church. It was during this meeting conducted by Evangelist Fred Lohmann that Wilson Atwood professed to have been cured of large cancer on his shoulder, an event that stirred the entire community. [2] [4]

Fred R. Lohmann was born November 20, 1883, at Lohmann's Crossing in Travis County, grandson of immigrant John Henry Lohmann for whom the site was named. John Henry Lohmann, who was born in 1799 in Hildesheim, Germany, is said to have fought at the Battle of Waterloo. He first arrived in Galveston in 1842 and, after a return trip to Germany, settled at Hornsby's Bend in 1848. [ 5] Fred Lohmann attended Pilot Point Bible Institute in Peniel, Texas (now Bethany College) around 1904, and later served as pastor at Malvern and Russellville, Arkansas. He received an honorary Doctor of Divinity degree in 1932 after publishing a booklet, Seven Fundamentals of the Christian Faith. Dr. Lohmann's last church was Trinity Tabernacle in St. Louis, Missouri, where he died August 12, 1955. He was interred there in the Lebanon Cemetery. [6]

Nothing remains today of the old frame structure.

Born January 11, 1879, in Malvern, Arkansas, Jim C. Moore came to William­son County as a young boy to work on his grandfather's farm.

He married Lula Ida Perry on October 8, 1899, in Williamson County. He died October 21, 1917, and is buried in the Perry Cemetery near Loafer's Glory.

The decades bridging the turn of the century was an era of crusades, or "movements," as they were called. The Holiness movement, basically Methodist in the background, began to emerge during the 1880s, protesting what was regarded as a growing "worldliness" of the more conventional churches. The Holiness Church became the "people's" church at a time when older denominations were becoming "middle class." This was a period of missionaries and revivalism. After gaining strength through the turn of the century, a declining response to evangelistic campaigns came as families migrated to urban areas in the early decades of the 1900s. [9] Though services continued to be held for several years after the death of their spiritual leader, Jim Moore, a dwindling membership eventually led to the demise of Loafer's Glory Apostolic Church. The last services were held around 1930. No visible remains of "The Shed" are evident today.

Besides those mentioned above (Jim and Perry Moore, Clinton H. Cornelius, and George Sutton) was Waymon Dewitt Taylor. Born in Montgomery, Louisiana, on 30 November 1894, he was among the early members of the congregation of Loafer's Glory. Noted for his beautiful singing voice, Rev. Taylor also composed over 90 gospel songs. On the occasion of his ninety-fifth birthday in 1989, Mayor Kathryn Whitmire of Houston signed a proclamation declaring that day "The Reverand Waymon Dewitt Taylor Day." [10] Dee Taylor commenced preaching in 1914 and was ordained three years later as our country entered World War I. In 1992 Rev. Taylor was cited as one of only four living Assemblies of God ministers who were ordained by 1917. [11] Also cited was another Loafer's Glory native, Sunshine Marshall Ball of San Antonio. Born in Liberty Hill in 1896, Sunshine Marshall was orphaned at an early age and was raised by her mother's cousin, Ida (Mrs. Wilson) Atwood. She taught at Concord School before her marriage to missionary Henry C. Ball and was ordained on April 26, 1917. With her husband, Mrs. Ball operated a Spanish language printing press in New Braunfels and opened a bible school near El Paso for Spanish speaking Texans. [8]

Mrs. Ball's cousin, Lee Roy Atwood, son of Wilson and Ida Atwood, also served as a missionary in Uruguay until his retirement. He was born at Loafer's Glory in 1910. [8]

Loafer's Glory is typical of several short-lived religious enclaves which populated western Williamson County until they slowly disappeared in the early twentieth century.

Urbanization and time have left little or no trace of these small communities, all but erasing from memory the fervor of their camp meetings where devout and back-sliders alike gathered from miles around to pray and sing and to receive inspiration from eloquent sermons delivered by roving messengers of the gospel.

Loafer's Glory Apostolic Church is representative of the movement which produced such men as Dwight L. Moody, Billy Sunday, and Billy Graham.

An official Texas State Historical Marker would be an appropriate way to commemorate this small church, which played an important role - not only in the lives of those who lived in the area - but in the lives of countless others throughout the world who were influenced by the religious teachings of those who sprang from its congregation.