On the left is Mike Young - right side is John Christeson
Mike is in the process of restoring the cemetery. 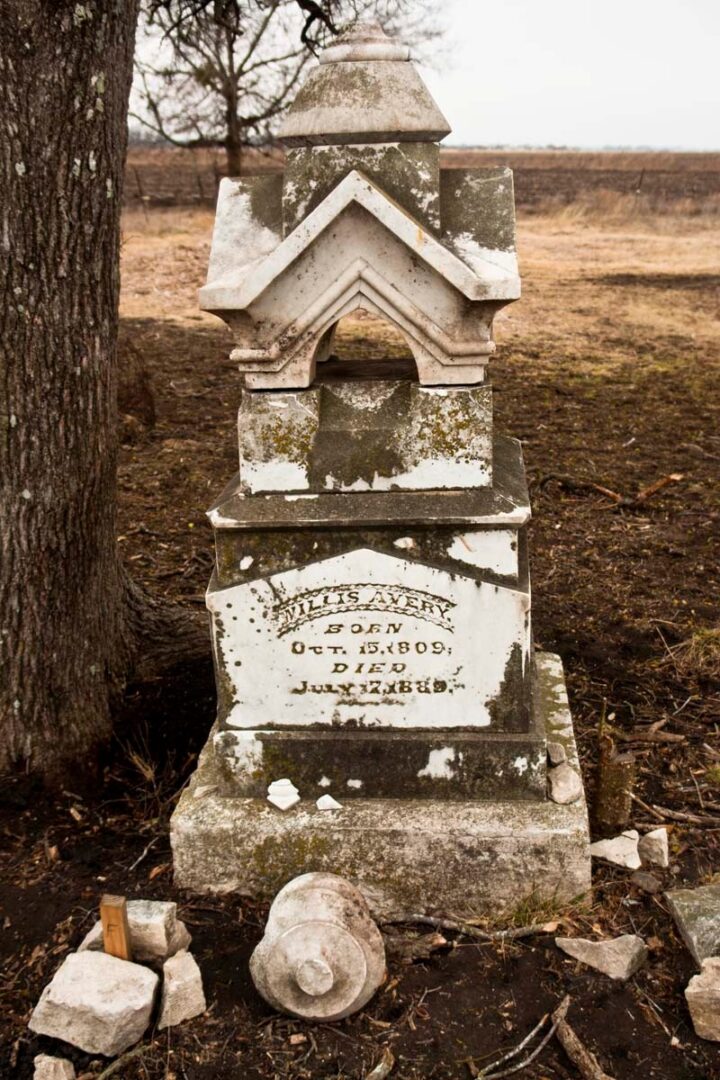 From the intersection of FM-973 and FM-1660 continue east on FM-1660 until you see a mailbox with 16101 on it. Take the driveway north past the house and two large metal storage sheds to the gate in the fence. One large gravestone with four names on it is just behind the shed to the west when you pass through the gate. There was once a fence around the gate that has been trampled down by the cows pastured here over the years.

This is the cemetery site of one of the Texas War of Independence fighters.
Willis Avery 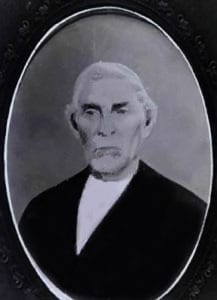 AVERY, WILLIS THOMAS (1809~1889) Willis Thomas Avery, Republic of Texas Veteran and Texas Ranger, was born in North Carolina on October 15, 1809, to Vincent and Catherine Overton Avery. After the death of his father, Avery's mother married William McCutcheon, Sr. and moved to Lincoln County, Missouri. The McCutcheons had one son, William.

While in Missouri, Avery met and married, Elzina Weeks, who was born on November 10, 1812. Together, they had nine children, Nancy, Malinda, Vincent, Willis, Lucinda, Henry, Calvin, Harriet, and W. T. On November 12, 1832, the Avery's arrived in what is now Bastrop County. In 1836, Avery's mother and her third husband, Gordon, or Joseph, Jennings, and their family joined the rest of the family in Texas.

During Texas' fight for independence, Avery's step-father, Jennings, was said to have perished at the siege of the Alamo, while Avery joined Captain Jesse Billingsley's Company of Mina (Bastrop) Volunteers on February 28, 1836.

The Mina Volunteers eventually became Company C of General Edward Burleson's regiment, fought at the Battle of San Jacinto. Company C was made up of settlers who lived in and around Bastrop County.

Ultimately, the Avery's moved to Williamson County and settled on Brushy Creek, near Rice's Crossing, where Elzina died on March 1, 1870.

Willis died on July 17, 1889, and both were buried in the family cemetery on their property.

On July 3, 1938, Avery's remains were moved to the Texas State Cemetery in Austin.

Erected by the State of Texas
1936

To: 'Terry & Gayle Smith'
Subject: RE: Avery cemetery #1
Wow great - that fence looks well built and sturdy - job well done - I'm glad you guys were able to get that done - now the monument will be protected.
Original Message
From: Terry & Gayle Smith
Sent: Saturday, June 03, 2017 9:26 PM
To: wayne ware
Subject: RE: Avery cemetery #1
June 3rd,2017 we got the fence completed at Avery #1. My brother Robert and his wife Ella Mae and their son Dale, as well as my husband Terry and myself, spent the day out there in the mud and got a substantial fence around the beautiful monument- Sure makes me happy-see
picture attached! Gayle Smith
Original Message
From: Terry & Gayle Smith
Sent: Sunday, July 31, 2016 4:49 PM
To: wayne ware
Subject: Avery cemetery #1
On Saturday, July 30, 2016 we visited the gravesite of my 3rd great grandparents (although I
see that my grandfather was evidently moved to the Texas state cemetery) and found the
cemetery in terrible condition-it is actually the landowner barnyard-no fence exists and all the
stones are trampled by livestock. The one "standing" stone is of my ancestors. There is a dead
tree which, when it falls, is likely to break my ancestors standing marker.
What can we do to preserve that cemetery for future generations? Any information you can
give me would be appreciated. We live in north-central Texas and this was our first visit to this
site and needless to say we were shocked.
Thank you in advance for your help. Frances Gayle Hall Smith-descent of Willis Thomas
Avery and Elzina Weeks Avery.
Gayle Smith

HISTORICAL BACKGROUND
Willis Thomas Avery acquired the 1280 acres of land where the cemetery is located from M. C. Hamilton, Ma;
19. 1858, recorded book 7, page 366, Williamson County Deed records.
471.25 acres where the cemetery is located was sold by W.T. Avery' to Robert J. Eckhardt on Nov. 20, 1913,
recorded in Vol. 160, Page 79 Williamson County deed records. (This is when the land left the Avery family).
133.82 acres where the cemetery is located was purchased by Jay D. Mikulencak on Sept. 22, 1995. Inst #
9543130, Williamson County Deed records.
There is no reference to the cemetery in any of these deeds.
The cemetery was likely established when Willis and Elzina Avery's daughter Melinda Avery died on August
25, 1867 and was buried in the cemetery. Fannie Moore died December 12, 1847, Elzina Avery died March 1,
1870, Willis Thomas Avery died July 17, 1889, and are buried in the cemetery. A large 4 sided marker and a
separate marker for Fannie Moore are the only markers remaining intact in the area of the cemetery. Willis
Avery's name is on one side of the 4-sided marker. Elzina Avery is on another side of the marker and on the 3rG
side two names are listed: Melinda Avery (daughter of Willis and Elzina) and Fannie Moore. The 4th side of
the marker is blank. An infant baby of parents Grover and Ora Avery, who died in 1919, is buried in the cemetery but
there is no marker at the cemetery.
Willis Thomas Avery and their family came to what is now Bastrop County in November 1832 from Missouri.
He Avery family settled on land in Williamson County on Brushy Creek, near Rice's Crossing in 1845.
Willis Avery fought at San Jacinto as a member of Jesse Billingsbv’s Mina Volunteers. Because of his service
for Texas, Willis Avery received 640 acres of land and another 1280 acres of land. Willis Avery was a member
of Texas Ranger Company C, and as a Texas Ranger, he was with Mirabeau B. Lamar on the famous buffalo
hunt in 1838 at the present site of Austin, Texas.
During the runaway scrape, Willis's wife, Elzina Weeks Avery, left her home and joined those fleeing from the
Mexican Army. While on the run, Willis and Elzina's child was delivered by Willis's mother, Catherine
Jennings (Mrs. Gordon Jennings, widow of the oldest man who fought and died at the Alamo
In 1938, Willis Avery's remains were removed to the State Cemetery in Austin. A marker was placed there for
Willis Avery on Republic Hill. Some accounts say Elzina's remains were also removed from Avery # 1 to the
State Cemetery but others indicate the additional markers at the State Cemetery for Elzina Avery and Catherine
Avery. McCutchcon, Jennings are cenotaphs.
The land on which the Avery# 1 cemetery is located is now owned by Jay D. Mikulencak. A search of the deed
records shows no mention of a cemetery from the time the property was owned by the Avery family through the
date that the property was owned by Jay Mikulencak. The cemetery is no longer active.