The Rev. Freeman Smalley, one of the first Baptists in Texas, preached in this area about 1850. This church was organized about 1851, meeting in a log schoolhouse built by Joshua Stapp and others, 1854-76; in a new school building, 1876-94; and in a structure of its own at Pilot Knob, 1894-1936. Successively called "Stapp," "White House," and "Pilot Knob" Baptist Church, the congregation moved to Andice in 1936. It now worships near the original site, where the first pastor, Josiah Andrews, used to hand his pistol on a peg on the hewn, oak-stump Bible stand while he preached.

The movement of the American frontier westward from the Atlantic seacoast began soon after the establishment of the first colonies in Virginia and Massachusetts. This surging tide of pioneers was made up of people from western and northern Europe, who carried their religious convictions, transplanting them in the New World. As the frontier advanced, religion was the vanguard.

Many religious groups were very adaptable to frontier life. Among those that prospered were the Baptists. Dr. Rupert N. Richarson says that "since Baptists recognized the authority of the local congregation as superior to any other body in church matters, it was easy for them to establish churches under frontier conditions."

So it was, that in 1821 when Stephen F. Austin brought his first colony to Texas and the tide of immigration swept into the Mex­ican state, the Baptists entered the field.

Among the early settlers were preachers and deacons who were able to provide services for their people and to organize churches without the aid of outside missionaries.

Smalley preached what may have been the first Baptist sermon in Texas. He made the long journey from Ohio to Texas on river rafts and by foot, sleeping in uninhabited forests much of the time and gathering food from wayside sources. Rev. Smalley was an earnest and tireless preacher of the gospel and was eagerly heard by pioneer groups of Texas. After returning to his home in Ohio, the Smalleys moved to Vermilion County, Illinois, and in 1834 the old Middle Fork Baptist Church was organized in the Smalley home. In 1837 Rev. Freeman Smalley was instrumental in organizing a Baptist Church at Higginsville.

In 1847 the Smalleys moved to Texas and purchased a place on Brushy Creek just east of Round Rock. Their son, Freeman Smalley, Jr. (1820­-1849), had preceded the family to Round Rock and lived near­by.

Nancy Ann and Freeman, Jr. were the parents of Sabra C. considered the first white girl born in William­son County. Sabra C. married Sam B. Purcell, and two of their children, Sam E. Purcell, now living in Bertram, and Dora (Purcell) Davis, were members of the Pilot Knob Church, later organized in 1894. Levi Asher mentioned previously, became a member of the Pilot Knob Church in 1911.

In 1850 Rev. Freeman Smalley, Sr. visited the Andice community and preached the first Baptist sermon in this area. The service was held in the home of Mr. Barton. The house was located on the south side of the Will Howland estate. During the following year, Rev. Josiah Andrews from Arkan­sas became the first pastor of the Bap­tist congregation.

In 1851 Joshua Stapp bought 369 acres of land from Winslow Turner for $184.00. And in 1854, Mr. Stapp, with the assistance of a Mr. Blackman and a Mr. Brown, built a log schoolhouse that serv­ed as both a school and a church. The log schoolhouse was located some 200 yards above the south bank of Berry's Creek Branch and some 300 yards north of the pre­sent Andice Cemetery. The remains of the school are still visible. Mr. Stapp was born in Tennessee, April 14, 1801, and came to Texas in 1850. He married Sarah Montgomery. Joshua Stapp) died July 22. 1887, and Sarah died March 6, 1872; they are buried in the Andice Cemetery.

The rostrum or pulpit used by Rev. Josiah Andrews, the pastor of the Baptist congregation, was an oak tree stump hewn out for the "stand," as it was referred to in those early times. On the side of the "stand" was a wooden peg to hold his six-shooter while he preached.

Several Tonkawa Indians still lived in this area until 1855. Fortunately, Tonkawas proved to be among the tribes who were friendly with the Anglo-American settlers, and they fought against other warlike Indian groups on behalf of the Anglo colonists. Oc­casional raids by the warlike tribes were feared by these early settlers. Indian mounds are still visible on the M. B. Davis and L. I. Dunlop places. These mounds are only a few hundred yards from the old school and church.

In the late 1840's several log cabins were built in this immediate area.

The branch was noted for its many springs and fresh, clear water. The old Davis log house (part of which is still standing) was a boarding place for men building log cabins. When the buildings were finished, the men would return, bringing their families to this new place in the wilderness. The Davis home is just across the road from the site of the school and church. Some of the families living in log houses in the immediate area were the Davises, Mauldings, Johnsons, Clays, Chapmans, Peels, Andrews, Jacksons, Smalleys, Blackmans, Howells, Rutledges, Taylors, Buillions, and Morrisons.

The village of Lone Star was later known as Berry's Creek, then years later it was called Graysonville after an early settler, a Dr. Grayson.

In 1899 the village was named An-dice. Isaac Newton sent the name of his son, Audice, to the Post Office Department as the name for the new Post Office. The Department mistook the "u" for an "n" and consequently, the name Andice was born.

Mrs. Catherine (Hicks) Peel ( 1842-1937 ), better known as "grandma Peel," moved to her log cabin just west of the Andice Cemetery at the close of the Civil War. Mrs. Peel was the grandmother of Rev. Wesley Pearson (1889-1961), who was pastor of the Andice Baptist Church 1940-44. Rev. Pearson was also or­dained to the Gospel Ministry by the church. Mrs. Peel often told her grandchildren how much she enjoyed walking across the field to visit the Smalley's and other families.

In 1876, the band of Christians of several faiths meeting at the Stapp School began to search for separate places to worship.

In 1894, while Rev. Capps served as pastor, the Bap­tist congregation had a vi­sion exhorting it to build a place of worship of its own. Bro.

Newton gave the land for the new church located about a mile west of Andice. The following men gave generously of John L. Davis, Joseph M. Stapp, J. E. Savage, W. M. Wear, and Asa Newton. The church minutes state that Joseph M. Stapp, a grand­son of Joshua Stapp, gave half the cost for constructing a church building. He married Cynthia Crist, who was given credit for nam­ing the new church "Pilot Knob" for the nearby landmark bearing this name. The church was built of plank and painted white with a cupola on top. On the 6th of October, 1908, a severe storm com­pletely destroyed the Pilot Knob Church. People for miles around came to see what the day before had been a beautiful landmark.

People of all faiths offered their assistance if the church decided to rebuild.

The following week the members met under the Live Oak trees on the church grounds and, after a season of prayer, voted unanimously to rebuild.

While Rev. Langford was a pastor in 1914, the people of the church recognized the need for a place to worship in the open air during the summer months, so they erected a tabernacle made of lumber.

The ladies at this time felt they wanted a special way to serve the Lord, so a "Ladies Aid" was organized, with Mrs. J. H. Savage as president. In 1919 the ladies became more missions-oriented and reorganized as the Woman's Missionary Society with Mrs. Dora (Purcell) Davis as president.

In 1936 the Pilot Knob Church membership voted to tear down the old church and rebuild in Andice. Deacon Wayne Tomlinson removed the first board from the building. Rev. Noel Guice was pastor when the building was moved. C. M. Stapp, great-grandson of Joshua Stapp, deeded the Andice Baptist Church 1.76 acres of the original Stapp tract, near the site of its beginning. The Andice Church was built of lumber; some of the wood coming from the Pilot Knob Church was used in the new construction. 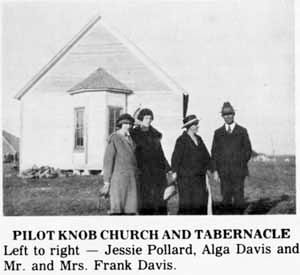 The church called Rev. Jerrel Gaddy in 1945 as the first pastor to serve full time; previously, pastors had served only fourth and half­time. During Rev. Gaddy's tenure, the church added the Educational Building, providing space for all of the church organizations to meet. A Baptist Brotherhood was organized to provide missionary education and more involvement for Baptist men.

During the pastorate of Rev. Conrad Dupree, the first parsonage was purchased and remodeled. The house was bought from Mrs. Gladys Foote in 1947.

During the past few years, the church purchas­ed a new, furnished mobile home and placed it on the church property for a parsonage. The church recognized the need for regular worship services on Sunday and at the same time realized it would be difficult to pay an adequate salary for a pastor to reside on the field full-time; therefore they adopted a plan to seek ministerial students to serve as pastors. The students arrive on Friday or Saturday and live in the mobile home through Sunday before returning to school. In addition to benefiting from their dedication and youthful fervor, Andice Baptist Church has provided many young pastors with an opportunity for in-service training.

In recent years, the church and educational building were air-conditioned for heating and cooling. Cushions for the pews were added, and a Hammond organ was installed. Other installations were a public address system and a four-station amplifier to meet individual hearing needs. In 1976, the church was completely renovated and redecorated at an approximate cost of $14,000, including the landscaping of the church grounds.

Although the Andice Baptist congregation has been in existence for some 125 years, a baptistery was never built in any of the church buildings. Converts were baptized in nearby branches and creeks. In recent years baptismal services were held in a sister church in Florence. During the renovating and redecorating project, a baptistery was installed. The first baptismal service was held on Sun­day, March 7, 1976. Rev. Randy Schmidt baptized four candidates: Mrs. Keith Cox, Linda Cox, Angie Snow, and Darleen Snow. 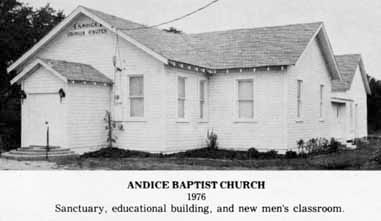 Today, the church is a member of the Williamson County Baptist Association, affiliated with the Baptist General Convention of Texas and the Southern Baptist Convention.

The role of the church in the community has been most signifi­cant throughout the years. The church served as a place of worship for over a hundred years, despite storms, drought, and depression. One church's influence in the community is demonstrated by the lack of violence in this area for over a century of existence. The Andice Baptist Church has af­forded special Christian training for its young people and given them the inspiration and motivation to become good citizens. The achievements at­tained by these young people have been outstanding and are a living memorial to this Bap­tist congregation.

The church helped to carve out of the wilderness a civiliza­tion and culture that the people of the community enjoy today. The church continues to make a contribution to Texas history by its Christian influence generation after generation.

The unfolding of the additional history of the beginning of the Andice Baptist Church prompted the church to apply for a Texas Historical Marker on February 16, 1976.

The application to the Texas Historical Commission con­tained this paragraph: "In these changing times, our pur­pose for historical recognition is to cherish our forebears for their dauntless and courageous devotion to higher ideals. They overcame adversities known only to pioneers in a new land. In erecting this marker, we want to honor those that have gone on before, and perhaps we shall give our young people a spark of determination to carry on and leave the heritage we were handed." 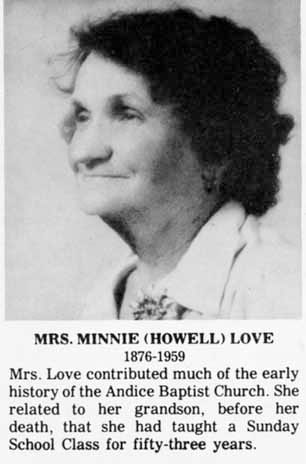 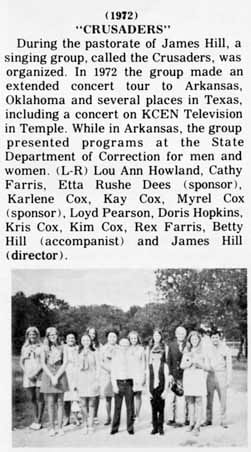 The application for the Texas Historical Marker was approved on March 19, 1976.