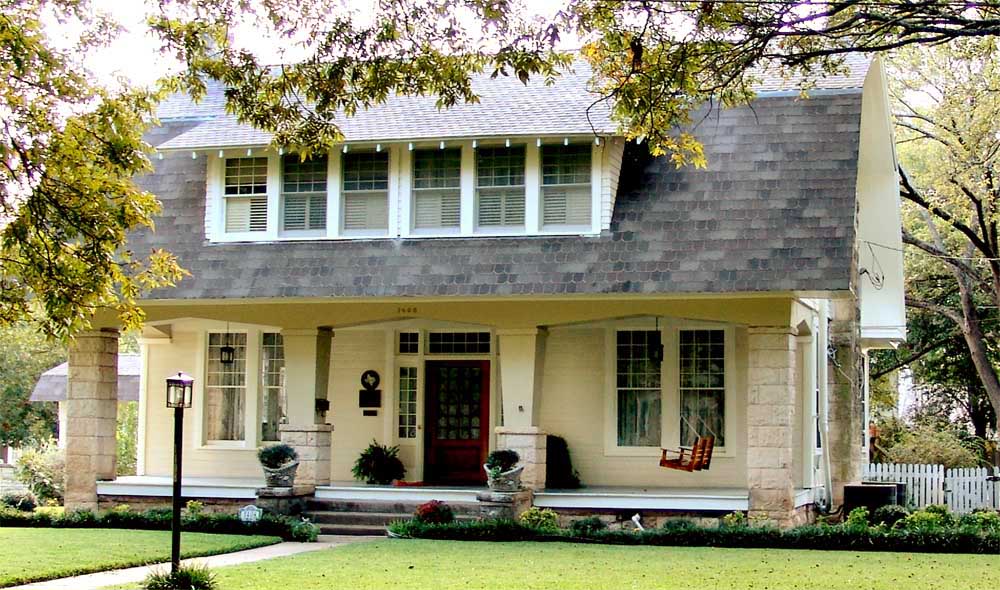 Primary area of significance: architecture. One of Belford's more unusual residences-one of three houses in Georgetown with a gambrel roof. Martin Amos was a professor at Southwestern University.

Inscription. Built in 1909 by the C.S. Belford Lumber company, this was originally the home of Southwestern University German professor Martin C. Amos (d. 1911) and his family. It was later purchased by another member of the university faculty, chemistry professor John Campbell Godbey, who lived here until 1965. Features of the home include a gambrel roof and three-bay inset front porch with stone piers.

In the first decade of the twentieth century, Georgetown was a developing city with great potential. As the seat of government for Williamson County, it was the center of an area marked by steady growth. It was also an important railroad shipping point for agricultural products, especially cotton. In addition, it was the location of Southwestern University, the premier Methodist institution of higher education in the state at the time.

It was in the context of a promising future that Southwestern professor Martin C. Amos commissioned the construction of a home at 1408 Olive for his wife Mary (Lewen) and there- only child, Ruth (b. ca. 1906), in 1909. [1] Shortly after it was completed, however, circumstances changed the family's future. In 1910, a controversy developed regarding proposals to relocate Southwestern University to Fort Worth or Dallas. Although the debate was short-lived, it generated widespread speculation about the future of the school and its association with Georgetown. The situation eased somewhat by 1911 after the Methodist church reaffirmed its commitment to Georgetown. Dr. R. S. Hyer, regent of the school during the relocation speculation, resigned and later helped found Southern Methodist University in Dallas. [2]

Martin Amos, a professor of German at Southwestern University, was in his mid-30s at the time the relocation controversy developed.

A native of Cologne, Germany, he received his A.B. at Butler College and his Ph. B. at the University of Chicago. In 1905, he was chosen to chair the Department of Germanic Languages at Southwestern University. [3]

In the summer of 1911, Professor Amos grew despondent over the situation at Southwestern, which he felt could jeopardize his employment.

On June 19, he confided in his summer school class, telling them that his worries had prevented him from sleeping regularly. That night, he cashed a check of $50.00 from J. W. Long and told him that he was going to visit his sick daughter who was with his wife's family in Palestine, Anderson County. He traveled to Round Rock by car, where he caught the train to Palestine. There, on Tuesday, June 20, he committed suicide by ingesting poison at the home of Ed Rutledge, his father-in-law. News of Professor Amos' tragic death, which shocked the university community, reached Georgetown after Mrs. Amos wired her friend Mrs. Weisser (probably the wife of Hermann Weisser, who sold the Olive Street property to the Amose’s): "Martin has killed himself. Come at once." Amos' funeral and burial were conducted in Palestine, although he was a resident of Williamson County at the time of his death. [4]

Research showed no record of a death certificate for Martin Amos in either Anderson County or Williamson County.

His obituary, however, attributes his suicide to the fact that "he had been worried over the unsettled state of affairs in the University, fearing loss of employment and of his home, for which he had not finished paying. These things and the great heat are believed to have unsettled his mind. . .[5]

Although efforts were made to discover what happened to both Mrs. Amos and her daughter Ruth, the records are not conclusive.

Martin Amos died without a will, but Mary filed papers regarding his estate on January 23, 1912. [6] Six days later, she sold the family home to S. E. Wilcox. [7] Anderson County records show Mary Amos filed papers in 1919 to clarify her guardianship of Ruth Amos. An accompanying inventory and appraisement statement show Ruth, then thirteen stood to inherit an estate that included land in Anderson County and property from her grandfather's estate in Indiana.° The latter may have been land belonging to Amos' father, since the Sun article mentioned that his parents lived in Cumberland, Indiana."' The marriage records of Anderson County show a Mary Amos, who may or may not have been the widow of Martin Amos, wed Charles A. Hoffman on November 23, 1919, but no later records for either Mary or Ruth Amos were located in Palestine. [10]

A scientist by training, J. C. Godbey accomplished much in a diversity of fields. The obituary of his death in 1970 noted:

A man of many and varied talents and interests, Dr. Godbey was known as a scholar, scientist, poet, musician, churchman, athlete, lecturer, and author.

In addition to heading the science department at Southwestern for many years, he also served as director of athletics, coach, sponsor of the letterman's association, and, for many years, popular advisor to the senior class. His genuine interest in students and participation in their many activities endeared him to generations of Southwestern students. In 1955 hundreds of Southwestern alumni returned to the campus to honor him at the university-sponsored 'Godbey Day.' [12]

In addition to these achievements, Dr. Godbey published a book of poetry and several textbooks.

He was named to "Who's Who" lists in Methodism, Education, and Chemistry, and served as president of the Texas Academy of Sciences. A veteran of the U. S. Army during World War I, he was active in the local post of the American Legion and was also a leader in the First Methodist Church, where he taught the men's Sunday school class for more than four decades.[13]

She died in Georgetown, May 30, 1956. [14] The probate records of her estate show that she and Dr. Godbey had six children: Dr. John C. Godbey, Jr.; William Givens Godbey; Ethel (Mrs. Lewis E.) Godbey Tucker; Margaret Lee Godbey; the Rev. Perry Godbey; and Mary Donley Godbey, who died in infancy. [15] After his wife's death, Dr. Godbey continued to live in the family home until 1965, when he sold it to Southwestern professor George E. Nelson and his wife Frances."' Three years later, he moved to Houston, where he died in 1970. [17]

At the time of its construction, the Amos-Godbey House was considered one of Georgetown's premier new residences.

A photo of the home is featured prominently in a promotional booklet published by the Citizens Club (ca. 1911). [18] Built by the C. S. Belford Lumber Company, it is one of only three houses in Georgetown with a gambrel roof. The residence reflects influences of the Colonial Revival style and features a three-bay front porch with two stone piers and two box columns canted toward stone bases. The porch design produces an interesting visual effect that enhances the size and "heaviness" of the roof. The massive gambrel roof features diamond-shaped shingles and a shed dormer above six small windows. In addition to the porch stonework, the frame house has stone exterior chimneys at the shingled gable ends. The broad proportions of the porch and the entry door opening (multi-paned door with transom and sidelights) are indicative of early twentieth-century architecture.

Alterations to the Amos-Godbey House during Nelson's ownership included a painting of some interior woodwork and the addition of new wallpaper.

Mr. and Mrs. Charles Steger, who bought the house in 1972, have enlarged the kitchen and added a wooden deck on the west side. None of the alterations detract, however, from the original scale and design of the residence. Its architecture, unique within the context of Georgetown, and its long association with various members of the Southwestern University faculty make the Amos-Godbey House an important landmark in the community. Prominently sited on a corner lot, it serves as a reminder of Georgetown's potential in the first decade of the twentieth century.