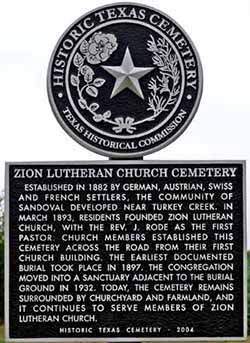 There are three veterans buried in our cemetery. Two of them served during World War I: Henry Fuessel died in France, and one is unknown. Erich A. Schlickeisen served in World War II.

The origin of Sandoval has not been proven, but it is thought to be named for Manuel de Sandoval, Spanish Governor of Texas from 1734 — 1736. It was a small community near Turkey Creek in East Williamson County and settled in 1882 by Carl Streich. The settlement consisted of German, some Austrian and Swiss and a few French immigrants.

The first pastor was J. Rode, and services were conducted in the German language. On September 29, 1894, Paul and Emma Herbst donated one acre of land across the road to eventually be used as a church and cemetery. [1] In 1902 an addition was made and dedicated by Max Heinrich. In January, 1903 , a bell was purchased and dedicated to the service of God. That same year the Sandoval church and St. Johns Church in New Bern joined into, pine parish.

In April 1904, an organ was purchased. By the time the congregation celebrated its 25th anniversary, the congregation owned two acres of land, a church, school, and cemetery. Thirty-eight years later in 1932, the congregation started their service in the old church and then walked across the road to dedicate their new church. It was dedicated by Pastors Gus Szillat and his son-in-law, Gus Sager.

The post office was discontinued in 1904. A new school was built around 1920, and in the mid 1940's the school was closed and consolidated with the school district in Thrall, Texas. [3]

The cemetery is located five miles north of Thrall, Texas, off FM 1063 on CR 425. The oldest documented grave is for Ida Lehmann, a baby girl who died in 1897. Her grave is located at the northeast corner of the cemetery. The cemetery is unfenced and contains 98 known gravesites and 14 unidentified gravesites that are marked with white iron crosses. The church is still active and the cemetery still serves as a burial site for the members of Zion Lutheran Church. [4]