Legend surrounds the first years of this burial ground. Local oral history relates that among the earliest graves are those of a slave called Willie Osborne and an unknown Native American. Members of the Stephens family, ambushed by Indians in 1854, are said to have been buried here in their wagon. The oldest marked grave is that of infant Polly Williams, interred in 1854 on land owned by W. W. Williams. A cemetery association was organized in 1960s. Many honored veterans of Confederate and U. S. Armed Forces are interred here. Fifteen graves were moved from the Bullion Cemetery in the 1970s when Lake Georgetown was formed. More than 240 graves were counted in 1997. (1998) 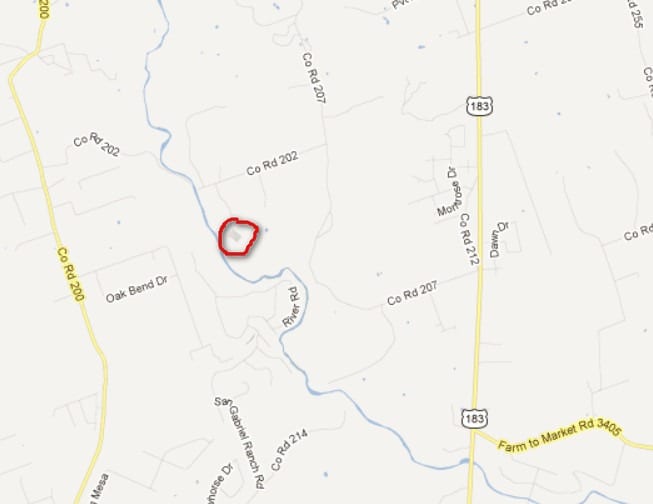 Hidden away in the cedars and oaks of western Williamson County on a limestone outcropping, an old cemetery shelters about 240 marked and unmarked graves. Mowed and trimmed and surrounded by a chain-link fence, the cemetery is an ongoing burying ground 5.5 miles from the intersection of Highway 183 and County Road 207 on CR 200.

Although the earliest burials were probably that of Willie Osborne, a black slave belonging to the Williams family and an Indian man who had the misfortune to win at a gambling game, the earliest marked grave is that of Polly Williams (1854), the infant child of Louis and Polly Axley Williams. The latest is that of Tim Edward Whitehead who was born on May 22, 1944, and died on May 16, 1997. A historic burial thought by some to be at Williams Buck is that of the Stephen family ambushed by Indians in 1854. Instead of coffins, they were buried in the bed of their wagon after the wagon wheels and tongue had been removed. Brymer Stephen, his wife Emily Cowan, their son Johnny (12) and two daughters (ages 8 and 10) were found by Mr. Mather and Mr. Bullion near the Connell place on Bear Creek Road.

Near Liberty Hill on W.W.(Billy) Williams’ land, the graveyard was established as the Williams Cemetery when the child Polly was buried in a small above the ground crypt formed of flat white stones fitted together like a box. W.W. purchased the land from John F. Weber on May 3, 1851, and it passed to his daughter, Susanna who was married to Civil War veteran J. N. Brown(5). Susanna Brown’s daughters and W.W. Williams’ granddaughters, Almyra and Delia, married sons of Abner Buck, Grover and Crutchfield. Almyra and Grover Buck are buried at Williams Buck.

Because the adjacent land had been sold to the Buck family and the Williams, Brown and Buck families were connected, the 3.08 acre Brown Williams community burial ground(8) took on the name of Buck as an identifier.

Ira Whitehead, Clyde Duncan and Jack Copeland led the cemetery association formed in 1963. On April 24, 1966, Maggie Mather, Ozelle Mather, Lela Whitehead, Jack Copeland and Ira and Nita Whitehead organized the Buck Cemetery Association to make improvements to the cemetery and its access road and to install a chain-link fence to keep cattle out. Among others who worked were the Charlie Vickers, Sam Jacksons, and Anthony Inmans. When the Cemetery Association was formally incorporated on October 2, 1986, the graveyard was called Williams Buck to commemorate the history of the hallowed ground. Incorporators were William Buck, Georgetown, Texas; and Cecil Williams and Lola Vickers King , with Mrs. King of Route 2, Box 10K, Liberty Hill, Texas, as the initial registered agent. A list of more than 200 names and addresses was attached to the charter in the President’s Notebook. Nadine Higginbotham of Austin, a member of the Whitehead family, is President.

In the early days, the rocks were grubbed out of the soil and piled on the property boundaries. Willie Osborne is supposed to have placed the stones around the cemetery. He, like other slaves, is thought to be buried within the stone walls, but outside the chain-link fence. These graves are still marked with limestone, but their names have long since disappeared. The names chiseled on the white limestone reflect the Anglo-American background of the settlement. Because many of the families have lived there half a dozen generations, most of the people buried in the cemetery are related through marriage and kinship. The dates on the stones show that their arrival was contemporary with the surrounding communities( and reflect major events, such as the Civil War and the World Wars.

The inscriptions show that about 10% of those buried at Williams Buck fought for their country.

World War II was possibly the largest single catalyst for change in both demographics and economics. Camp (Fort) Hood less than thirty miles away provided work and an unaccustomed prosperity in terms of cash money.

Proliferation of cars eased transportation and roads were built making possible commuting to jobs and schools. The jobs in town brought not only cash flow but opportunity. Postwar, the strongest magnets for the young in a wave of urbanization were the cities of Austin and San Antonio and Waco and Temple. Many of the young left, but others arrived, in marriage or in retirement, evidenced by the names on the stones and on the cemetery association’s list. Although many members live elsewhere, they come back and they remember, especially during the annual October meetings.

The dates on the stones show only life span and when old people, infants, young men and women died. The reasons why are found in obituaries, oral histories and genealogies and vital statistics.

Some died in old age (19 were over 80) and others died from exposure to extremes in weather and to diseases. People also died following accidents, such as W.W. Williams who drowned in the Gabriel(2); from complications in child birth and from being stillborn. Membranous croup (pneumonia) was a major cause of death during the time of the Civil War(11) and cholera and typhoid were caused by the use of impure surface water. Water wells in the early days were difficult to dig because of the limestone. Compared with present day wells of 680720 feet in depth, most early wells were shallow with the deepest no more than 150 to 250 feet.

The graves were dug by the families. During the Civil War when men were away at war or in the Home Guard, graves were dug by boys and old men. Funeral homes did not yet exist and the dead were usually laid on a cooling board on the back porch where the bodies were washed, dressed and prepared for burial. The early coffins were usually covered in black muslin, outside and inside, and the black fabric also lined the hole in the ground, but the pillow was white muslin.

The coffins in the early days were hand made of ripped lumber. The wood was usually elm or post oak grown on nearby Bear Creek and the North San Gabriel were the river bottom trees grew bigger. Because of the stony ground, cemeteries in western Williamson County had to be located where graves could be dug, usually in caliche deposits. A foot deep cut around the grave perimeter was also lined with black muslin up until the 1920s. It is thought to be a tradition brought from Europe. After the service, the coffins would then be lowered into the grave with lariats.

When the North Fork of the San Gabriel River was dammed to form Lake Georgetown in the mid1970s, the graves from several communities including part of Andice, Oatmeal, Florence and Smithwick, were dug up and moved to other cemeteries to save them from being inundated.

The Army Corps of Engineers published a Cemetery Relocation Report describing the effort of the Army Corps of Engineers to relocate the graves according to the wishes of current family members. Some graves were reburied at Rocky Hollow and the Presbyterian Cemetery in Georgetown. Fifteen Bullion graves from the Bullion Cemetery at Bullion Mountain (Lake Georgetown, Russell Park, Jim Hogg Community) were moved to Williams Buck because relatives were already buried there. Bullion Mountain was an old settlement on the upper north San Gabriel River, seven or eight miles east of Rock House whereas Williams Buck was about two miles from it. Although some of the graves were not marked, all them were platted, numbered and transferred to the new cemeteries. The unmarked graves were examined to see if any item might identify the long dead. Many artifacts, such as jewelry, hair barrettes and personal pocket knives with initials were found, indexed and inspected by the families and marked on a map.

The significance of the Williams Buck cemetery is several fold. It is a social center for the living, significant to many of the families in the community. It chronicles social change, but more important, it is a tangible monument to the past. A history written on stone which documents the past for the families, for the community and for the state.

Researched and written by Travis and Charlene Hanson Jordan who give appreciation and credit to Irene Varan (Williamson County Historical Commission Chair) for assistance and support. Elgin, TX