From The Handbook of Texas Online is a multidisciplinary encyclopedia of Texas history, geography, and culture sponsored by the Texas State Historical Association

Type is on Dry Brushy Creek three miles southeast of Coupland and two miles from the Bastrop county line in southeast Williamson County. The Type school, which had thirty-eight pupils in 1903, dates from 1900. A Bastrop County post office was established in Type in 1902 with August Smith as postmaster; it closed in 1904. A crossroads community was settled in the early 1900s by Swedish emigrants a mile north of the site of the school, and a Swedish Evangelical Church was organized at Type in 1908. The community had a population of twenty and one business in 1940 and was listed as a Bastrop County town by the Texas Almanac of that year. The school at Type was merged with the Coupland school in 1945. In 1949 Type had forty inhabitants and two businesses. The population remained stable at forty inhabitants through 2000, and in 1999 the community had a single business, the Type Store. 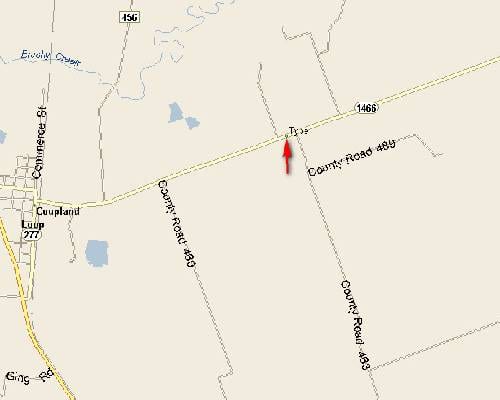 How Type got its name:

A native West-Goth,1 the Swedish-born August Smith2 named the Scandinavian part of the community "Type" on December 24, 1901,3 when he applied to the U.S. Postal Service post office to be located in his store. Because the Smith Store was on the Bastrop County side of the county line road, the application shows that Type is in Bastrop County. However, most of Type, including the cemetery, is in Williamson County, about twenty-five miles northeast of Austin.

The U.S. Postal Service had rejected the first name sent in by August Smith. "Type" was then submitted by Mr. Smith, presumably, because of "typing" done on the printing press owned and operated by Jonas Sunvison,4 another Swede. Mr. Sunvison printed advertising posters, flyers, greeting cards, and similar material until he moved from Type to Beaukiss in 1912.