The earliest Anglo settlers of this area came to the vicinity in the 1840s. They called their community Post Oak Island for an isolated Oak grove between Bastrop and Circleville. Many of these pioneers had moved on by the time Swedish and Danish immigrants arrived in the 1890s.

Swedish-born August Smith owned a store which straddled the line between Bastrop and Williamson Counties. Smith opened the Type Post office in that store in 1902, probably naming the community for the printing machine owned by his friend Jonas Sunvision.

The Type Cemetery was established on land conveyed by Peder and Christine Nygard when the Swedish Free Mission Church was founded in May 1908. The tombstones of Anna Amalia Hansen (Hanson)(d 1910) and Christina Frederickson (d.1915) are inscribed in Swedish, merely one indication of the strong cultural identity of the early settlers with their homeland. Burials before 1950 are primarily those of members of the Carlson, Hanson, Nygard, Nyman, and Swenson Families.

The small number of Scandinavian burials in the cemetery after 1950 reflects the group's assimilation into American culture and the dispersal of local young people to cities. In 1954 the Swedish Free Mission Church merged with Kimbro's Free Church. Of the 36 graves counted in 1998, eleven were those of Swedish immigrants and fifteen were first or generation Scandinavian Texans. Several Mexican graves were located on the eastern edge of the cemetery. The Yegua Creek Evangelical Free Church, which relocated to this site in 1987, maintains the Type Cemetery. (1998) 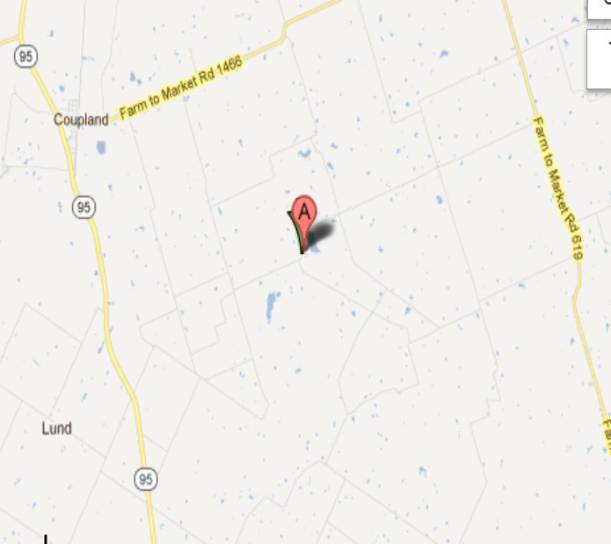 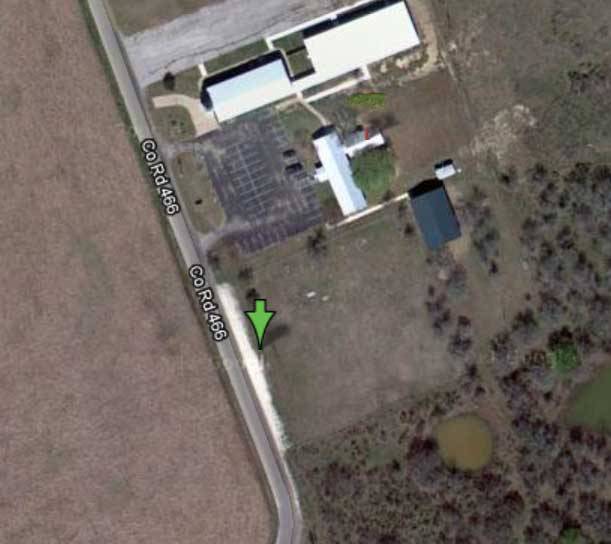 Burials in the Type Cemetery: PDF

First, there was Post Oak Island, [1] an early settlement named for an isolated oak grove midway between Bastrop and Circleville. It was on the dividing line between two soil types and consequently two types of vegetation supporting two widely different lifestyles, that of the sandy land and of the prairie. The early settlers starting in the 1840s were primarily Anglo-American, and they built their homes in the more habitable sandy land which supplied trees, water, and game. The settlement of the prairie's richer soils, but more stubborn cultivation, did not really take hold until the introduction of barbed wire in the 1880s and 1890s at a time when the original families were beginning to move away.

Some of the Swedes and Danes came in the 1890s to the land which had been homesteaded a half-century before; for example, the Nygard's [2] moved into a log cabin that was already there. Those pioneers on the north side of the church, in the pastures (Bennett and Robbins), had to contend with clearing the land of mesquite and prickly-pear cactus. Among those families were the Louis Nelsons [3] and the Hansons [4], and Swensons. [5&6]

The Type Cemetery was founded by some of these Swedish and Danish immigrants on May 20, 1908, when the Swedish Free Mission Church was established [7&8] on County Road 466 in southeastern Williamson County.

Others in the Scandinavian community were Lutheran. They went to church at Lund or New Sweden and are buried in those cemeteries. Some references have placed Type in Bastrop County9, but the church and cemetery were never in Bastrop County. August Smith's store, which housed the Type Post Office from 1902 to 1904 [10], was on the south (Bastrop) side of the road separating Bastrop and Williamson Counties. The store was in what later became the Kylberg Community, Bastrop County, and was located at least two miles southwest from the church and cemetery in Williamson County.

Thirty-six [11] known graves are in the cemetery, which dates from 1909. Almost half (14) of those buried at Type were born in Northern Europe (Sweden 11; Denmark 2; Germany 1), and another 15 were from the first and second-generation Scandinavians born in Texas. Type is the farthest East of the Swedish communities stretching outward from Austin on the south side of the Brushy Creek. Swedish was preached in the church until the 1940s, and the community was held together by the church until the mid-1950s when the congregation joined with Kimbro's Free Church to form the Elgin Evangelical Free Church. The church building was sold to John H. Hanson on February 20, 1956. [12] After the church was moved, fewer burials took place in the cemetery, and one person (Louis Nelson) was disinterred and buried in Elgin. The only families represented in the cemetery during the four decades between 1950 and 1990 were the Swenson­Hanson-Jordan family (7) and the Nygards (1).

The present church was established in 1984 at Lawhon Springs and started meeting at Type in 1987 under the name of Yegua Creek Evangelical Free Church.

The land to the south of the church and cemetery is drained by a creek called the Yegua, a name taken from a Spanish word meaning mares. It was so-called because horses had come there to foal in the protective woods at the edge of the prairie. [13] The pastor leading the establishment of the new church was the great‑grandson of Peder Nygaard, who donated the land to the church and cemetery.

The church community and the cemetery have changed in the half-century from the 1950s on, and the present congregation is now made up of three groups of people. There are the descendants of the Swedish and Danish settlers, about one-fifth; The remaining four-fifths is made up of the descendants of the Anglo settlers in the wooded sandy land to the south and east, and a newer group which has come into the area in the last fifty years. Of the nine buried in the 1990s, seven (the Andes, Gay, Moss, and Ray) moved to the area after the 1950s. The Scandinavian Hanson and Swenson, and Nygard families continued their burials in the cemetery, but Mexican-Americans have not been buried there in the last half-century.

(At least three Mexican graves were located along the east fence, but they were not included in the church records because they were not connected with the church.) The Anglo groups from the early settlements in the area are not represented in the ten different family groups in the cemetery. They generally continue to use and maintain the well-established pioneer cemeteries, such as Lawhon Springs, Beaukiss, Pleasant Grove, and Lawrence Chapel, or the city cemeteries in Elgin, Taylor, or Austin.

The pioneer Scandinavian church community was bound together by language, heritage, the shared history of a European homeland, and the memory of a transatlantic immigration.

They were devout, and their practice of faith was strict and pious. The pastors were Swedish (many were born in Sweden) 14, and the congregation was Swedes or Swedish-speaking Danes. Two tombstone inscriptions in the cemetery are written in Swedish (Anna Amalia Hansen [Hanson], 1910; and Christina Fredrickson, 1916). The tombstones are aligned on an east-west solar axis with the headstone on the west of the grave mound, as is customary in the South. [15] The cemetery gate was handcrafted in the mid-90s in iron by Andre and Travis Jordan, descendants of the Hanson, Swenson, and Jordan families.

Three of the tombstones are made by family members. They are the tall rectangular markers for Harvey (1858-1936) and Elna Engdahl Hanson (1864-­1933). The headstones were made of cement by their son, John H. Hanson. The other is a flat piece of limestone finished and inscribed by Travis Jordan for his grandmother, Ruth Linnea Swenson Hanson, who died in 1988. The house of worship in the 1908 beginning was a small and very simple wooden rectangle with three windows on each side, and the Swedish language was preached up until the 1940s.5'16 The church, rebuilt in 1997, [17] now seats up to 300, has stained glass windows and HVAC, but neither pastor nor congregation speaks Swedish.

The pastor is of Swedish and Danish ancestry, a great-grandson of the pioneer donors of the cemetery ground, Peder and Christine Nygaard, and Mark's wife, Nina Sanders Nygard, is a descendant of the early Anglo-Americans settling in the area not long after Isaac Sterne's 1840's diary entry described seeing buffalo roaming free. The congregation enriched by a mixture of cultures is united not by heritage, history, or culture as it once was, but by a vibrant Christian faith under the leadership of a dynamic, forward-looking, but a historically-interested pastor. The pastor, by his marriage to a descendant of one of the original families at Post Oak Island, exemplifies the blending of the cultures.

The small number of Scandinavian burials in the cemetery after 1940 reflects the assimilation and also dispersal of the Scandinavians to other areas, primarily to the cities.

Family histories [5&18&19] reveal that with education, the young generally left the farms for the cities. The often large community-bound families who made their living from farming were replaced by smaller families earning a living through ranching or through commuting to work in cities made possible by improved transportation. The number of new burials in the 1990s reflects a return to living in the country, some to make a living there, but others to live there in retirement.

As the community changes, so do the cemetery.

How Type got its name:

A native West-Goth,1 the Swedish-born August Smith2 named the Scandinavian part of the community "Type" on December 24, 1901,3 when he applied to the U.S. Postal Service post office to be located in his store. Because the Smith Store was on the Bastrop County side of the county line road, the application shows that Type is in Bastrop County. However, most of Type, including the cemetery, is in Williamson County, about twenty-five miles northeast of Austin.

The U.S. Postal Service had rejected the first name sent in by August Smith. "Type" was then submitted by Mr. Smith, presumably, because of "typing" done on the printing press owned and operated by Jonas Sunvison,4 another Swede. Mr. Sunvison printed advertising posters, flyers, greeting cards, and similar material until he moved from Type to Beaukiss in 1912.

Burials in the Type Cemetery: PDF