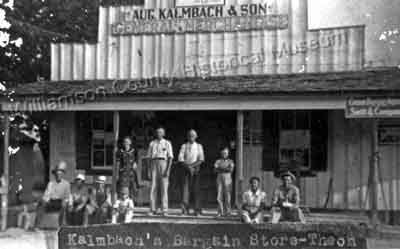 Theon Saloon, 1910, Adolph Tonn with son Reuben Tonn, Max Bielss, and Gottlier Kalmbach (L to R). Theon was settled mostly by German and Slavic immigrants with the town’s Holy Trinity Catholic Church at the center of the community.

Attracted to the rich farm land, immigrants from Austria, Bohemia, Germany, Moravia and Silesia came here in the 1880s-90s. This community grew around a cotton gin built about 1883. A Catholic church and school operated at nearby Corn Hill. A post office, named "Theon" for the Green "to God", opened in 1890. A rifle club sponsored dances, rifle contests and other socials. Farmers started a beef club, butchered mean monthly and shared it with all families. After the post office and school closed, the cotton gin continued to serve this area.

Walburg, Texas, is three miles to the southeast, and Jarrell, Texas, is about five miles to the northwest. Theon is also just seven miles from IH 35 at one exit and four miles at another exit.

Many European customs came with the new Texas settlers. The settlers were devout in their faith and looked to the church for social events as well as religious ones. The Holy Trinity Catholic Church was established at Corn Hill, about one-half mile from Theon, in 1889. A modest building was erected for the first church and is marked in the cemetery by a life-sized figure of Christ on the Cross. [3] The present twin-spire brick church was erected in 1913, and a parochial school was operated next door until 1968. German protestant families of the community generally attended one of the Lutheran churches at nearby Walburg. [4]

The first post office was established in Theon on September 12, 1890, with Mr. Fritz Krauss as the first postmaster.

The post office was applied for under the name "Bernville, but that name was not accepted. It is assumed that the local priest may have suggested the name "Theon" because of the Greek meaning of the word, which is "To God." On July 5, 1892, the post office was discontinued, and the mail was handled through Walburg. [5] On October 27, 1894, William Leubner was appointed postmaster of "Leubner"; thus Theon became officially known as Leubner. In 1900 August Kalmbach purchased the land and buildings, and Gottlieb Kalmbach was named postmaster of Behrensville, so named after the pioneer settler, H.T. Behrens. The post office stayed open until April 3, 1906, and at that time was moved to New Corn Hill, Texas. 6

The land around Theon was settled because of its use for the very best in farming land.

The principal crops other than those used to feed the families were; corn, cotton, and small grains. Cotton was the principal money crop for the area. About 1883, Thom Mrazek either bought or probably built a cotton gin at Theon, which he operated until 1891. The gin was purchased by Ernst Miersch in January 1891, and a corn mill was established at the mill to grind corn for meal and bread. When farmers brought their cotton to the two-stand gin, it was weighed on a platform wagon scale, was unloaded on the upper floor, and was carried in a wire basket to the stands where it was fed in by hand. Cottonseed fell to the floor as they were separated from the lint, then was stored for seed, feed, or fertilizer. Lint dropped on the floor behind each stand, where it was gathered by hand into a basket and carried to the press box. When the box was full, a steam engine pressed the cotton, repeating the packing procedure four times for every bale, then tying and bagging the bale. Miersch accepted about one hundred pounds of seed cotton in exchange for ginning a bale. When coal was not available as fuel for the steam furnace, young Paul Miersch cut cordwood to feed it. Miersch sold the gin in 1906 to E.E. Jungmichael of Walburg. [7] Mr. Jungmichael then sold the gin to a Widow Sladecek, and she, in turn, sold the gin to Frank Kott in 1919. Mr. Kott had just returned from World War I. Most of the modern alterations to the machinery of the gin have been made since 1945. The gin is now owned and operated by the sons of Frank Kott, Alphonse, and Emil. The Kott Brothers ginned 1500 bales in 1959, and in 1978 ginned 508 bales. [8]

In about 1892, the Theon farmers organized the Theon Beef Club.

A building was put up, and once a month, a beef was killed, and all the families in the area came in for fresh meat on that Saturday. The Beef Club was disbanded in about 1941. [9]

The Behrenville Rifle Club was formed in about 1888 with about thirty to forty families as members.

A platform was built north of the present Moravian Hall, where large dances, rifle contests, and other social events were held. [10] [11]

The land and all the buildings on the land were purchased for $600.00.

(In 1873, the land in and around Theon was selling for approximately $6.25 per acre). Mr. Havelka Sr. built the house that now stands behind Possum Creek Inn, at Theon. The building which houses Possum Creek Inn was operated by Mr. Havelka Sr. as a tavern in 1912. Joseph Havelka Jr. recalls that all the beer sold in the tavern operated by his father was in barrels, except Budweiser, which was bottled by Anheuser-Busch Company. The tavern also sold whiskey, and other liquors and young Mr. Havelka helped his father in the tavern. Young Josephs' chore was to transfer all the liquor out of the casks into bottles of half-pint, pint, and quart size, which he was required to wash before-hand. Also, he labeled and stamped with Texas and Federal stamps all bottles of liquor.

Mr. Havelka recalls being sent with a wagon and team to the railroad depot in Bartlett before 1915 to pick up the kegs of beer and casks of liquor. After 1915, he traveled to Jarrell with the wagon and team to pick up the wares for the tavern from the new railroad depot there. Prohibition came to Texas in 1917 and stopped the sale of beer and liquor. Mr. Havelka Sr. rented some of the tavern areas for storage use and, as of January 1918, began to sell only soda water and "Near-Beer." [12]

As far as can be determined, the building on the north side of FM 1105, now known as Possum Creek Inn (so named for Opossum Creek, which runs just to the east of the building), was built by Gottlieb and August Kalmbach sometime proceeding February 1912.

[13] The buildings on the south side of the square, which were used as a general store, post office, tavern, beef club, gas station, barbershop, and several other businesses, were built or moved onto the land purchased by William Leubner from the Rosenkranz family for approximately $13.65 per acre in 1894-1900. [14] August Kalmbach purchased the properties from the Leubner family and continued to operate several businesses. The cotton gin was in continuous operation throughout the years. William Kalmbach, son of August Kalmbach, purchased the land and buildings from the family heirs and continued to run the businesses on the south side of the square with the help of his children until 1975. [15] The property on the north side of the square was sold to William Kalmbach by Joseph Havelka Sr. (which included one house, one tavern, and acres of land) in January of 1923 for the sum of $2200.00. The tavern on the south side of the road had been turned to storage about 1900, and the tavern on the north side continued to be operated on a lease basis from the William Kalmbach family from 1923 to the time it was sold to John C. Doerfler and W. Leo Wood in August of 1977. [16]

The property purchased by Doerfler and Wood consisted of seven acres and all the original still-standing buildings of Theon with the exception of the cotton gin.

Jimmy Doerfler, John Doerfler, and Leo Wood did extensive renovations to the interior of the tavern on the north side of the road (the exterior of the building was not changed with the exception of painting and an extension to the back of the building to house a kitchen and restroom facilities), The interior renovations were made with the express intent of retaining the original atmosphere of Theon. [17]

The Theon community has contributed many worthwhile citizens to Williamson County and the State of Texas.

Preston Smith, Governor of Texas, 1969-1973, was born near Theon-Corn Hill and attended schools in that area until his family moved to West Texas. Surnames of family members baptized at the Holy Trinity Catholic Church prior to 1899 were as follows; Vrabel, Skurka, Schwertner, Zrubek, and Havelka, to name a few.

The people still living in the Theon area are proud of their heritage and recall the past as a time of hard work but good living.

Memories of "penny candy" at the general store while waiting for the cotton to be unloaded; playing under the trees with friends; visiting with friends; shopping in the store, and looking forward to going to town on Saturday. The remaining open businesses have retained some of the "old ways" in that the tavern is still used as a family social gathering place, and the gin still caters first to those families who have been bringing their cotton to be ginned since the late 1800s.

Small rural communities, such as Theon, are fast disappearing from the Texas country-side.

The nostalgic past of the "little towns" is being forgotten as modern methods of travel and communication have brought larger social and shopping areas near to hand. Small one-room schoolhouses' have given way to large consolidated districts. That feeling of "community" is all but lost. Theon, as it stands today, still remains a typical example of small towns and communities that served the early settlers and following generations with all their social and business needs.

Theon, as it is today, has three families in residence, Kott Brothers Gin (which operates during ginning season), two houses which are still habitable (built in the early 1900s), the general store, a building which served as a feed store, a garage, the building that at one time housed the "Beef Club" and Possum Creek Inn (which operates as a family-style tavern). If one enters Theon early in the morning from the east on FM 1105 and ignores the asphalt pavement and the Highline wires and poles, you can be transported into the past in your mind's eye.

Theon, Texas, should be commemorated as a historic rural community.

It served the needs of the early Texas settlers and their families. And it stands today to remind us of the past and the efforts that helped to make Texas the great state it is.