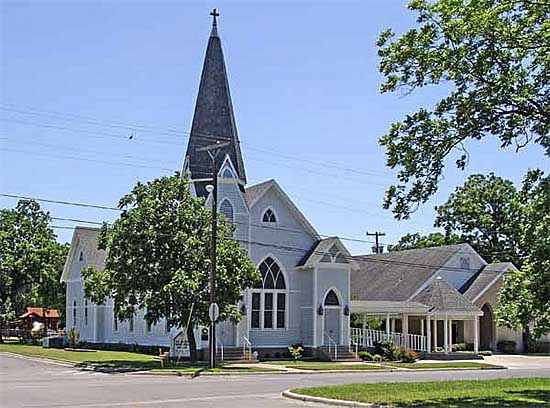 First Episcopal services in Taylor were held 1878 by the Rev. E. Wickens, a missionary. Visitations were also made by the Rt. Rev. Alexander Gregg, first Bishop of Texas. Services were in homes and opera house. This church of cypress, oak and pine woods was completed 1893 in traditional cruciform plan. The organ installed in 1914 is still in use. The structure retains original stained glass windows and interior paneling. Recorded Texas Historic Landmark - 1969.

St. James' Episcopal Parish of Taylor continues to hold services in its original church building, completed in 1893. The earliest record of Episcopal services in this area indicates a missionary, The Rev. E. Wickens, visited Taylor in 1878 and held the first Episcopal service. Two years later, Bishop Gregg made the first visitation. He noted in his diary, "November 7th, 1880, Taylor, Texas, Sunday: assisted in the services, addressed the congregation, preached and administered Communion." Services were held during these years in various homes and in the Opera House.

In 1885 the small group of local Episcopalians organized themselves under the name St. James Parish. The members petitioned the Diocese of Texas and were accepted in union with the Diocese as a Parish. In 1892, under the leadership of Rev. Charles Minnegrode Beckwith, General Missionary of the Diocese, plans were made for building the new church. Dr. A. V. Doak, P. M. Woodall, D. K. Woodward, D. R. Meade, and J. R. Boswell were elected vestrymen of the Parish for the year. Dr. Doak had already conveyed to the Vestry a lot, but the Vestry was now instructed to purchase the adjoining lot and to advertise for bids on the church construction. This deed is recorded in the Williamson County Courthouse and indicates the Vestry paid $1000.00 to A. V. Doak for the land. It is dated May 28, 1892.

The Parish Registrar indicates on the same day a loan for $1,000.00 was negotiated from the Church building Society.

Although no record has been found concerning the architect or the actual construction of the structure, the building was completed in 1893. By 1904 the Ladies Guild and Altar Guild had begun the extensive interior improvements.

The Church structure embodies the traditional cruciform plan based on the Cross. The principal entrances, identical doors, and vestibules are at the west and on either side of the front: the sanctuary and the altar area in the east. Rising above the northwest narthex is a charming spire pointing upwards as a constant reminder of things above. Also of interest is the old bell attached to a wooden frame located outside a door on the south side of the chancel.

Three primary woods were used in the building of the church.

Cypress makes the foundation, and white oak has been used in the construction. The interior paneling is of pine and appears beautifully preserved. The windows are filled with the original stained glass. The designs are single-colored panes laid in geometric patterns; purple, white, blue, yellow, and green are the principal colors used in the individual glass pieces. The top sections of the windows have molding and glass that are shaped to arch gracefully toward Heaven. The windows fit into the design of the church's interior, enhancing the simple impressive beauty and reverence-producing effect.

Of particular importance to the historic, cultural, and religious significance of the church structure is the organ, oldest in Taylor1914 and placed in the church in 1894. While pipe organs are rapidly being replaced by electronic organs, the venerable old organ in St. James has been preserved and restored over the years. The ivories on the keyboard have deteriorated and have been replaced, while major repairs have been made on the action. The organ was originally built in New York with the traditional mechanical lines of old European organs. The lovely music fills the church today just as it did almost eight decades ago.

St. James Parish is a landmark in Taylor.

Although it is not the oldest church in the town, it is one of the few congregations still meeting in its original building. Air conditioning and a public address system have both been added recently for the comfort of the congregation, but otherwise, the church appears much as it did seventy-six years ago. The grounds are beautifully landscaped and shaded by large old trees. St. James Parish is a tribute to the city of Taylor and to the small band of Episcopalians through many generations who joined together in 1885, built their church in 1893, and have maintained the structure in reverence, simplicity, and sincerity during the Years.