From Georgetown, travel E on FM 971; R on Settlers Path;
L on Founder's Oak Way and Left on Pennington Lane.
Cemetery located on corner lot. (as of 2007)

Note: The cemetery fence was covered by vines and was very hard to see the marker and head stones.

Born in Fannin County, Texas, during the Republic of Texas period, John Parker Pennington (1840-1904), lived as a young man in Arizona Territory. As a member of one of the first families to settle in the territory he survived several deadly encounters with the region's Native Americans. He participated in the Civil War then moved his family to Texas in 1867. The first recorded burial was that of Pennington's sister, Margaret (Mag) Dennison, in 1872. John Pennington, his two wives, Emily J. McAllister (d. 1880) and Isabelle Purcell (d. 1916), and their descendants are interred here. (1995) 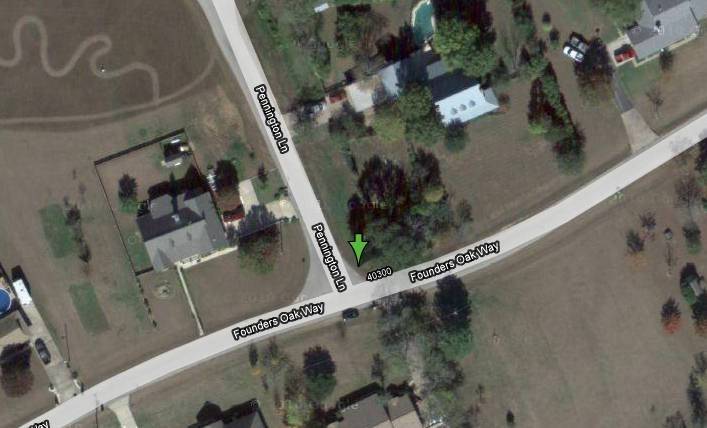 Take FM 971 East from Austin Avenue in Georgetown, Texas, to the intersection with Settlers Path. Turn right on Settlers Path and then left on Founders Oak Way. Continue on Founders Oak Way to the intersection with Pennington Lane. Turn left on Pennington Way and stop after the turn. Pennington Cemetery will be on your right behind a cyclone fence. The gate to the cemetery is at the North end of the fenced-in enclosure. The cemetery is across the street from a mailbox with 40204 (Pennington Lane) on the side.

Narrative by Eunice B. Rader, Marshall L. Pennington -
(They are the only living grandchildren of John Parker (Jack) Pennington as of September 1993.)

The Pennington Family Cemetery is located about 3 1/ 2 miles east by a little north of Georgetown on the Weir Road, FM 971. It is about 100 yards south of the road, surrounded by a chain-link fence that was installed about 1977. There is an old, stately live oak growing inside the fence. It is located on what was formerly the Pennington Home Place.

The cemetery is a part of Tract Two as mentioned in the deed for land purchased by John Parker (Jack) Pennington, being north of M.K. and T. Railroad and containing .14 acres of land. This is taken from the Deed Records of Williamson County, County Clerk's Office, Georgetown, Texas, Volume 661, page 102. The caretaker is Gary Nowlin, who lives beside the cemetery.

There are some low places to the west of the line of Pennington gravestones in no apparent order. John Parker Pennington, Jr., told his son, Marshall, about 1959 that the low places are where families in the countryside began to bury their dead in unidentified graves.

There is one marked grave of a non-family member in the southwest corner.

He was Charley Hill, b. November 8, 1869, d. August 29, 1888. He was a young, very well-liked itinerant farm worker in the neighborhood. He died at a time when all the streams were at flood stage.

While Jack was the one most responsible for the cemetery, information on his parents and siblings seems essential to provide background for the final arrangements.

Elias Green Pennington was born in South Carolina on April 16, 1809. Julia Ann Hood was born in North Carolina on November 12, 1815. They married on September 8, 1831, a place unknown, and moved soon thereafter to Tennessee, near Nashville. Their first four children were born there.

From Tennessee, they moved to Fannin County, Texas, arriving on November 25, 1839. Elias received a land grant signed by Anson Jones, President of the Republic of Texas, for a section of land. Their other eight children were born there for a total of four boys and eight girls. Elias freighted and farmed to support his young family. (List of family members attached.)

By 1855, Elias decided that Fannin County was getting too crowded for him and went to look for another place. While he was gone in September 1855, Julia Ann died and was buried in Honey Grove, Fannin County, Texas.

The family soon moved to the new place Elias had found at Keechi, Jack County, Texas. There are no traces of their short stay there.

After one and one-half years in Keechi, the family loaded-up again, intending to go all the way to California which was reputed to be the land of promise at the time.

The family joined a nearby wagon train in the spring of 1857. There were thirteen family members. Their belongings were loaded on three covered wagons which were pulled by oxen and mules. The train could make about fifteen miles on a good day.

While there was much danger from the Indians, the train was not attacked, probably due to its large size. There were many other problems and hardships such as breakdowns, water shortages, and swollen streams.

As the Indians stole most of Elias' livestock, he settled on a farm farther south on the Sonoita River Larcena's illness had changed the lives of the family? Only Amanda Jane ever made it to California.

There was constant danger from the Indians, and there were many trials and tribulations experienced by the family.

The most dangerous and dramatic was the kidnapping of Larcena by the Tonto Apaches on March 16, 18601 [4] She was taken from the camp where her husband, John Hempstead Page, was cutting timber for lumber in Madera Canyon of the Santa Rita Mountains, south of Tucson. When Larcena could no longer keep up with her captors after some 15 miles on the mountain trails on her first day of captivity, the Indians stabbed her repeatedly with lances and arrows, knocked her over the head, threw her off a cliff, and left her for dead. When the whites came by in pursuit, she was so weak that she could not call out.

Larcena spent the next sixteen days trying to get back to her camp. The Indians had taken most of her clothes. She ate whatever she could find such as wild onions and grass. She melted snow in her hands for water. She often had to crawl. When she finally reached her camp, she was cold, emaciated, hungry, and with many infected wounds. She, however, recovered and lived to a ripe old age in Arizona. Her capture is recorded in many places, including the Arizona Historical Society on the campus of the University of Arizona in Tucson.

During the Civil War, the troops left the Arizona Territory to participate.

The Indians thought the troops left because of them. So, from 1860 to 1870, the Indians increased their hostile acts of pillaging, thefts, murders, and other depredations. Many ranchers and farmers were forced from their lands and had to seek shelter in Tucson. Some left the territory.

The Penningtons led a restless, almost nomadic life which was characteristic of the times.

For his first eight years in Arizona, Jack worked on farms, hauled freight, provided wild hay for the fort, and the Butterfield Overland Stage Company of Gila Bend, and drove cattle to El Paso. He panned for gold in Gila City, Pinas Altos, and Wickenberg and rode as a ranger in the militia during the Civil War. [5]

He was involved in various encounters with Indians. Probably the one to attract the most attention was an ambush of the wagon train in Cook's Canyon, Donna Ana County, New Mexico, in August 1861. It was a most serious encounter, and both sides lost many.

Jack moved back to Texas in 1867 and located near Austin and then Georgetown.

By this time, John Hempstead Page, Larcena's young husband, was ambushed by Indians north of Tucson and killed in early 18618. He was buried where he fell? Ann died at Sopori in 18671 James was ambushed and killed near St. Xavier in August 1869 while hauling lumber to Tucson. [1] Elias was ambushed and killed while plowing in his field near present-day Patagonia in August, 1869.8 Green was fatally wounded when he came to his father's aid. Underwood C. Barnett, the husband of Ellen, died of malaria. Then what was left of the family moved back to Tucson.

The Penningtons next attempted to move to California but on the first day out, Ellen was stricken with pneumonia. They returned to Tucson where Ellen soon died. Her small son died soon thereafter.

After Ellen died, the desperate family members wrote to Jack in Texas and asked him to come to get them. He did so in 1870—four of his sisters and his brother, Will. Larcena married William Fisher Scott and remained in Arizona. [8]

John Parker (Jack) Pennington purchased land northeast of Georgetown near the San Gabriel River on the 24th day of June 1873 from Richard Sansom, a tract containing about one hundred acres, for eight hundred dollars, which he had in hand on an aforementioned day. This transaction is cited in the Deed Records of Williamson County, County Clerk's Office, Georgetown, Texas, Volume 17, Pages 304 and 305.

When Jack moved his family to Georgetown in 1870, it was the first time the members were free from the danger of Indians in their entire lives.

In 1877, Jack at age 36 married Emily Jane McAllister. There were three children, but only the oldest, Mittie Pennington Ischy, survived.

As the years went by, one sister died, and the others married and moved away. Will left, also, and never returned. And, for the first time ever, Jack, his wife, and three children were alone on the farm.

1890 was the year Jack began to see changes in his lifestyle. Cataracts, which may have been stimulated in growth by his freighting days, appeared and began to take their toll. They were removed from both eyes in San Antonio at the same time, and he never saw from either eye thereafter. It was a great "let down" from being a strong man in control of his life to depending on his family and friends. He could still visit his neighbors by remembering the number of steps to places and following the fences. If he wished to go to town, he would stand by the roadside and wait for friends to pick him up, or after the railroad came through his land, he would hear the train coming and go and stand by the tracks. The train would stop for him, and the train's crew members would help him aboard.

Jack bore his blindness cheerfully for a long time, but on November 30, 1904, he had enough.

On the night of November 30, 1904, after spending a pleasant day with his family, he took his bed sheet and groped his way to the corncrib. Climbing up onto a trough, he tied one end of the sheet to a rafter, the other around his neck, and stepped off into space. He was buried in the small family cemetery on his farm. [5]

The Penningtons were true pioneers of both early Texas and the Arizona Territory.