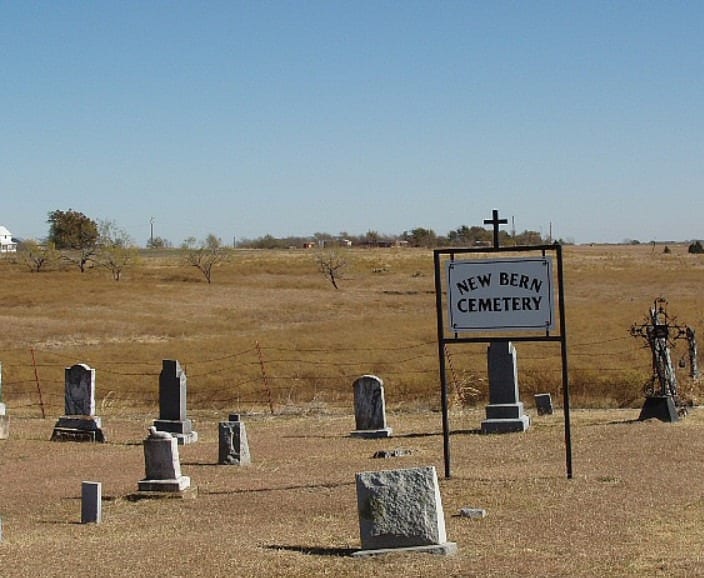 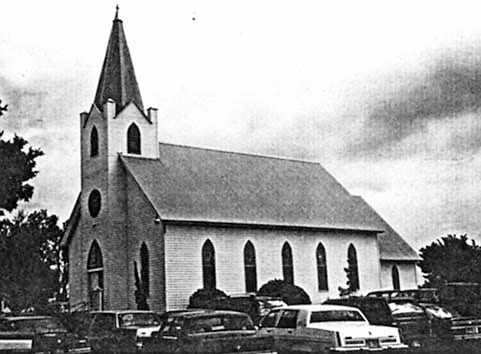 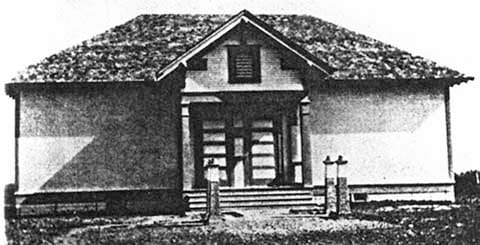 Swiss and German immigrants who settled here in the early 1890s named their settlement for Bern, Switzerland. In 1892 the newly organized St. John Lutheran Church built a sanctuary which also housed the New Bern School here on 2.5 acres donated by Daniel Murphy. The New Bern Cemetery (0.1 mi. E of this site) was established in 1895 on 3 acres acquired from Friedrich and Anna Stauffer. Though a new church building (1912) and schoolhouse (1920) were moved to the nearby community of Wuthrich Hill in 1949 the cemetery continues to serve the community.

He came to the area between 1890 and 1891. [1] A few of these settlers had originally started their new life in America in the Pflugerville area. Among them were Charles Stauffer (he later married Louise Fuchs of Thrall and moved south of Thrall where he farmed) and Friedrich Stauffer, sons of Samuel Stauffer who had settled in Pflugerville and was a charter member of Immanuel Lutheran Church established in 1874. (Most of Samuel's family - father, brothers, sisters - arrived in America through New York and followed the Mormons to settle in Utah.) Samuel and his wife Elizabetha Spicher Stauffer came through New Orleans, Louisiana, in 1872 and settled in Pflugerville. Some other early family names were Krieg, Weise, Kautz, Galler, Walther, Werchan, Meyer, Widmer, and Teggemann. [2]

In 1892 the community organized the St. John Lutheran Church.

The building was erected by Herman Schoener and his half-brother, Ludwig Fuessel, and was used as the school, with both German and English classes being taught.' The first pastor called was the Rev. F. Ernst. The community grew, and the need for a parsonage and cemetery was seen. Friedrich Stauffer and his wife, Anna Krieg Stauffer, then sold for $60 to the trustees, H. Teggemann and John Krieg of St. John Lutheran Church, about [3] acres of their 173.4 acres that they had purchased in 1892 from G. W. Burkitt north of the Murphy site. The deed reads, "....for the following purposes to wit: for a burying ground for the members of the said congregation and their families, for a site for a church building if at any time it is desired to use the same for that purpose and for a site for a residence for the pastor of the said congregation, and it is hereby provided that the said John Krieg and H. Teggemann as such trustees shall use the said property and permit the same to be used for the benefit of the members of the said congregation in accordance with the rules of said Evangelical Lutheran Church governing such matters. It is hereby further provided that upon the said H. Teggemann and John Krieg or either of them succeeded by any other person/persons, the title to said property should immediately pass to the new trustees". [6]

Before this cemetery was established, a few were buried on the Southeast corner of the Murphy tract near where the church building was erected.' Little did Friedrich Stauffer realize that his twin sons and wife would be the first buried in the new cemetery. Anna Krieg Stauffer, pregnant, had a wagon/buggy accident with runaway horses. She consequently gave birth to twin sons on October 5, 1897, with the death of one twin on that day and two weeks later the other. She then died on October 28, 1897.' In 1900 Friedrich married Marie Katharine Klotz. She died on May 8, 1936, and was buried in the cemetery. He continued living on his farm with his daughter and son-in-law, Fritz and Clara Wilde, until his death on August 1, 1941, in a car accident, at which time he also was buried in the New Bern Cemetery.

To provide more services for the community Friedrich Stauffer put up a blacksmith shop run by Conrad Ochner, later run by Rudy Bachman.

A store was established but closed after a very brief period of time. [9]

The original church and school building were used as the school after a new church was erected in 1912. The school children took turns carrying water to drink from a well at Stauffer's blacksmith shop. Baseball games were enjoyed by all the children, with the girls playing by themselves and the boys playing their own games. New Bern would play other schools like Turkey Creek and Hoxie. [10] About 1915, the frame building housing the school was replaced with another building. This building and the church were moved to Wuthrich Hill in 1949 when a merger took place.

The New Bern and Sandoval members of St. John Lutheran Church soon split, and in 1894, the Sandoval group withdrew and organized Zion Lutheran in Sandoval. At about the same time, the Wuthrich Hill settlers decided to organize again. So on December 22, 1894, in a special meeting, Evangelical Lutheran St. Jacobi (James) Congregation of Wuthrich Hill was formally organized. [11]

World War I saw some changes in the community with the Stauffers, Kriegs, Walthers, Muegges, Guentzels, Petzolts, Kruses, and others seeing their sons leave to serve in the war.

After the war, more German settlers were moving to the area: Remmers, Hackemessers, Heselmeyers, Schmidts, and among them Wilhelm Berg, his wife, and eight children. He, his wife, and the oldest two daughters came to America in 1896, settling in the Wuthrich Hill community but later moving to Vernon, Texas, in Wilbarger County. In 1917 he and his family came back to be nearer relatives and bought the farm of 138.8 acres across the road and west of Friedrich Stauffer. His farm was the southeast corner of the Hoxie Ranch. Today his grandson, Herman G., son of Louis and Bertha Berg Kaase, and his wife own the farm, and it is the only one in the New Bern area that the same family has retained possession all these years.

In the '20s, '30s, and 40's the congregation grew. The sons and daughters of the early settlers had married and stayed in the area to farm. Their children attended school (to the eighth grade) and were active in the church, especially with the arrival of Pastor M.C. Hoermann, who, with his wife and family, came to serve the New Bern group in 1934. The families enjoyed the fellowship with the minister and his family, celebrating birthdays at their homes, an old German custom.

By this time, Pastor Hoermann had moved to Westoff, but the families still had strong ties to the family. Soon the Stauffers, Kriegs, Walthers, Bergs, and others were seeing their grandchildren leaving to make their contribution to the war effort. The families were fortunate that most of the young men came back, but they were not ready to farm as their parents before they had been. They married, found other jobs because of more schooling, and moved to the cities. Thus, there were not enough children to educate, and the move was toward consolidation with larger schools. The churches were also merging. So it happened that in 1946 New Bern and Wuthrich Hill joined together to use one minister, the Rev. Paul Czerkus. Services were held alternately in both churches. The New Bern School was also dissolved in 1946, and the youngsters were bused to Thrall, where they could graduate from High School.

In December 1947, St. John of New Bern and St. James of Wuthrich Hill merged, and the name Prince of Peace was selected. In January 1949, the two buildings in New Bern were moved to Wuthrich Hill, and a new parsonage was also built there. Many of the New Bern members then joined with St. John Lutheran Church at Thrall.

The children, grandchildren, and great-grandchildren of the, early settlers have all contributed to American life with services rendered through being teachers, salesmen, lawyers, doctors, barbers, secretaries, construction trade workers, machinists, mechanics, computer specialists, bankers, and others.

They also have spread the Lutheran doctrine through their serving in churches wherever they live. These descendants of the early settlers are very proud of being Americans, but they also appreciate their heritage and are grateful to their forebears for giving them religious values and the many opportunities for education.

Researched by:
Helen (Kaase) Stauffer
REFERENCE NOTE: The author, Helen Kaase Stauffer, was reared in New Bern and has personal family knowledge of many of the events recorded in this History.