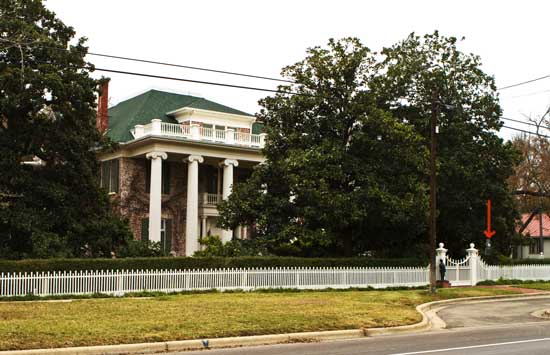 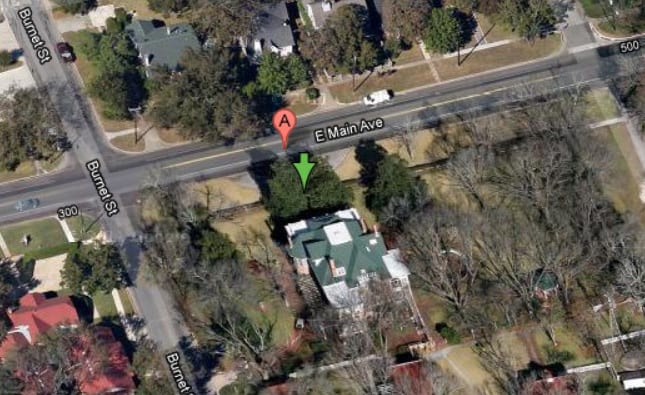 The most dominant element on the skyline of the small central Texas town of Round Rock is the Woodbine mansion. Located a few blocks east of the main business district, the three-story structure was completed in 1900 after approximately five years of construction. Since that time it has undergone several major remodeling and has been in continuous use as a residence.

The style of the original building was Victorian characterized by the steep roof with its many gables and chimneys.

A three-story circular tower crowned by a conical roof was located on the northeast corner of the building. The ground floor of this tower was wrapped with a low roofed veranda that terminated against a two-story porch at the main entry. The main entrance porch had fluted wood columns at each corner, free-standing at the front corners, and applied pilasters at the brick wall of the house. These columns were two stories tall with Corinthian capitals supporting a deep frieze that continued on around the house as a band just below the second floor eave line. The columns also supported a balcony accessible from the second-floor hall, and the roof of the porch was flat surrounded by a wood balustrade forming a balcony for the third-floor front room. There were several secondary entrances with their smaller porches and a major approach for carriages via a circular driveway on the west side of the house. The total effect was an asymmetrical composition that produced a stately, yet comfortable residence.

A major remodeling was accomplished in 1931.

Changes were made to the front facade and certain interior areas to create a Greek Revival style in place of the original Victorian. The key to this metamorphosis was the structuring of the asymmetrical front. The corner tower with its low roofed veranda and the projecting entry porch was removed. The brick front was then rebuilt as a balanced composition with the main entrance at the center. Nine-foot solid wood-paneled double doors were flanked on each side by leaded glass sidelights. This arrangement was framed on each side by columns supporting a projecting entablature which in turn forms a small balcony for the Venetian leaded glass double doors which light the end of the second-floor hall. Fully shuttered windows are symmetrically spaced in the brick wall on each side of the entrance at both the first and second floors. Projecting out from the front of the house is a flat roof at the same elevation as the frieze under the eaves of the original house. The new roof continues the same design and depth of the existing frieze forming a two-story porch forty-eight feet wide and eighteen feet deep covering the full north face of the house. Supporting the front edge of the porch are six rand fluted wood columns. These columns are two feet four inches in diameter at the base and taper up to classical Greek Ionic capitals. The scale of this front pre­sents a very dominant architectural element to the street side.

In 1966, another major remodeling was undertaken.

This latest work consisted of adding four additional rooms and completely refurbishing the existing house and grounds. The new rooms replaced existing screened porches at the southeast and southwest corners at the rear of the house.

On the southeast, a breakfast room was built.

next to the kitchen with a sunroom constructed above it on the second floor. The southwest addition consisted of a tile-floored garden room on the first level and a wood-paneled library above. The house now numbers some eighteen principal rooms, eight of which have fireplaces. The "widows-walk" on top of the three-story struc­ture commands the view for miles.

The basic structure is of brick and wood construction.

Exterior walls are load-bearing brick sixteen inches thick at the base. These walls extend approximately ten feet below the surface to rest on solid rock bearing. Straight stone lintels span over the door and window openings in these ex­terior walls. Spaced brick piers support all the interior floors and walls which are framed in wood. All the interior walls, except the kitchen and baths, are sheathed in wood with paper on sheetrock. The latter areas have cement plaster over wood lath which is also papered. The mansion consists of three full floors plus a partial basement which now houses the central heating system. Ceiling heights are twelve feet on the first floor, ten and one-half feet on the second floor, and nine feet on the third floor with an attic above.

All of the main rooms on both the first and second floors open off a central circulation hall that runs the length of the house. Operating transoms allow cross-ventilation even when the doors are closed. These factors coupled with the excellent insulating value of the thick masonry walls and the high ceilings create a comfortable environment during even the warmest summer months.

The mansion was built by members of the A. J. Nelson family, Swedish immigrants who settled in Williamson County in 1854.

Andrew J. Nelson, prior to his death in 1895, established extensive farming enterprises and served in numerous official capacities with the Swedish Lutheran Church in the town of Round Rock. It was in 1895 that the newly widowed Mrs. A. J. Nelson with her two sons and daughters started the construction of the very fine residence in Round Rock. The new home was completed and occupied in 1900.

After the death of Mrs. Nelson in 1923, the sons Thomas Edward and Carl continued to live in the mansion while they jointly engaged in numerous commercial and banking ventures.

The brothers encouraged agricultural diversification in Williamson County by starting the first commercial cheese factory in Texas, and by pro­viding financing to area farmers who established dairy herds. In 1929, T. E. Nelson married and brought his bride, the former Rebecca Young Schofield, to live in the mansion. In 1931, the family commissioned Wilson McClure, AIA, of Dallas, to alter the structure's facade from Victorian to the Greek Revival style.

In 1960, the mansion was purchased by Mr. and Mrs. Eugene N. Goodrich. Mrs. Goodrich, the former Jean Lange Crier, Texas artist, and antique collector, directed an extensive refurbishing of the structure which was completed in 1968. During this eight-year undertaking, Mrs. Goodrich drew on her rich knowledge of Victorian color usage and interiors to assemble the outstanding collection of period furniture and accessories which now fill the home.

Situated on its own city block, Wookbine is surrounded by towering elm, pecan, and magnolia trees. In this beautifully maintained park-like setting, the mansion today stands as an impressive and rare example of gentle life at the turn of the century.

view other Round Rock Historical Markers