This rock formation, located in Brushy Creek, is the source of the name of the city formerly known as Brushy Creek. “Round Rock” was chosen by Thomas C. Oatts and Jacob M. Harrell as the new name of the community in 1854. Site of the outlaw Sam Bass’s final shootout in 1878, Round Rock has become the largest city in the county, with its population more than doubling from 30,923 in 1990 to 82,040 in 2004.

Image 1016
Per Johan Noren and three sons, [L-R]: Harry, Walter, and Tom Noren, at the grave of another son, Pvt. Oscar A. Noren, who was killed in the Argonne Forest, France in combat during World War I on September 26, 1918. Photo at Palm Valley Lutheran Church Cemetery, 1918. Among the pallbearers were Oscar's brothers: Harry, Walter, and Tom.

Image 1015
Sam Loving of Round Rock gets ready to be shipped out to Cuba in the Spanish American War in 1898. He was in First Texas, Company E. 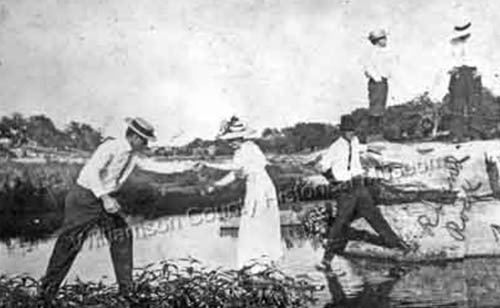 Image 1121
Young People at Round Rock 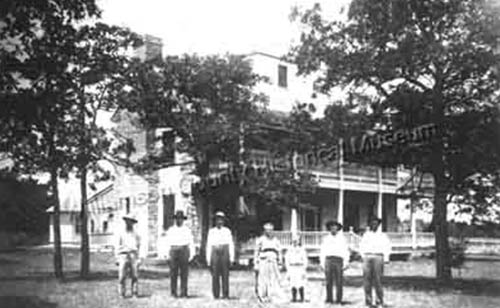 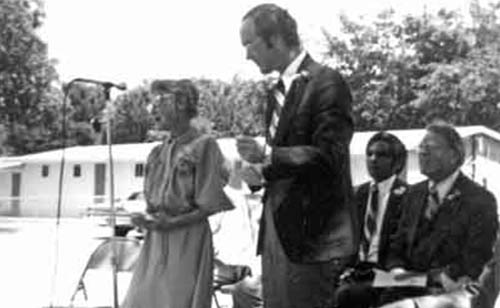 Image 1090
Dedication of Historical Marker for Round Rock's Schools, Myrtle 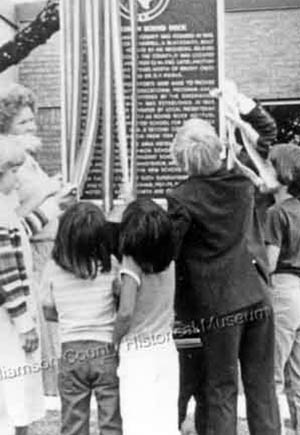 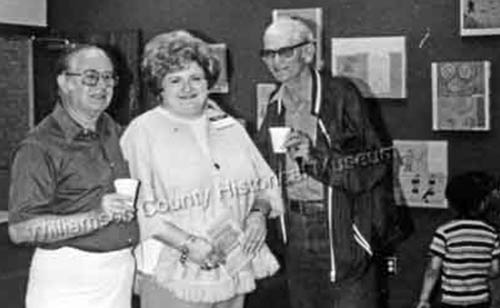 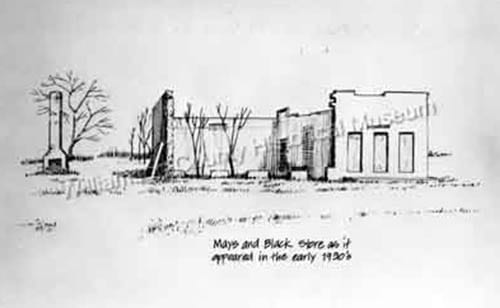 Image 1116
Drawing of Mays & Black store in Round Rock 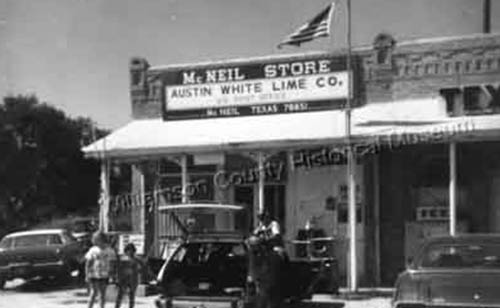 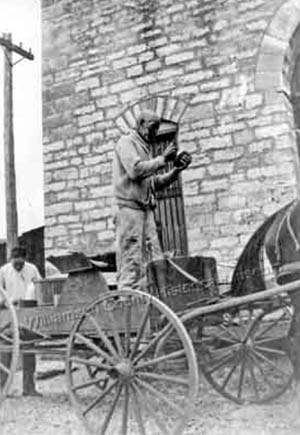 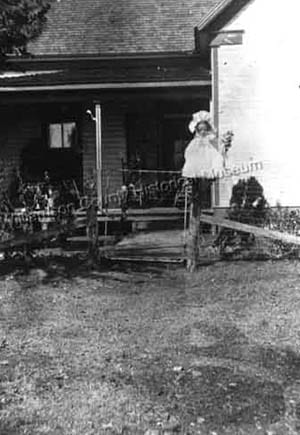 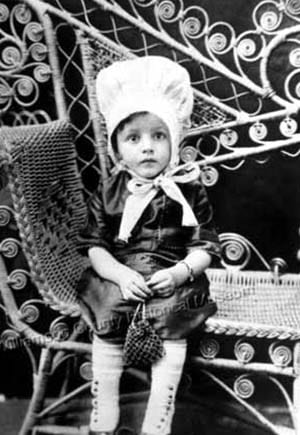 Image 1176
In the second half of the 19th Century, many Mexican families settled in the Round Rock / McNeil area to work at the lime processing plants. The photo of this young Mexican American girl was taken about 1920. Round Rock, Texas 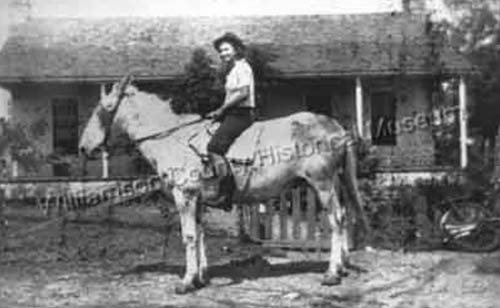 Image 2003
Frances McNeese on a white mule, “Pete” near Merrelltown, Round Rock, 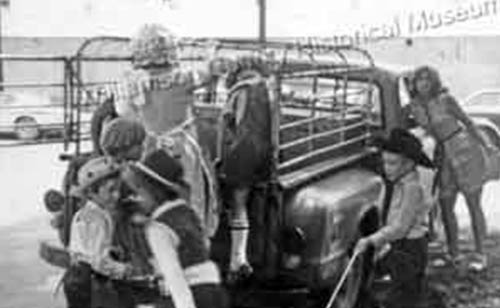 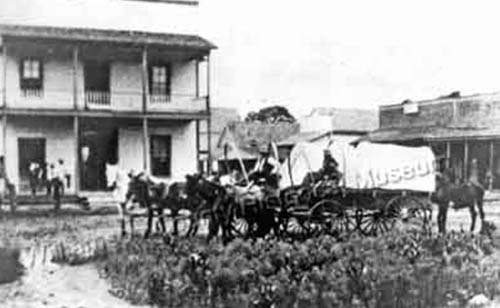 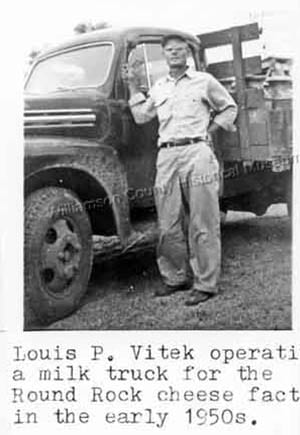 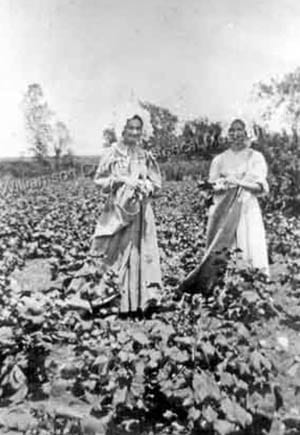 Image 4006
Kids on Trailer with Bales 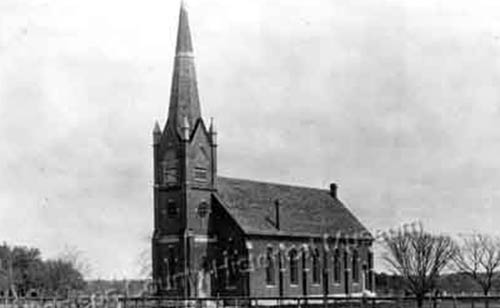 Image 5003
In 1853 Swedish immigrant Anna Hurd Palm brought her extended family to the Brushy Creek area, east of Round Rock. In 1894 the beautiful Gothic Revival style church building of Palm Valley Lutheran Church was built. Today this church stands as one of the most noted landmarks of the county. 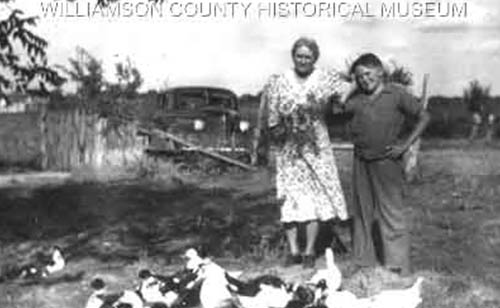 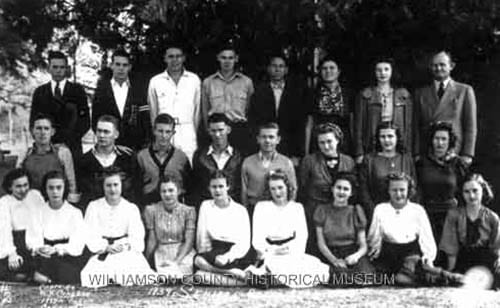 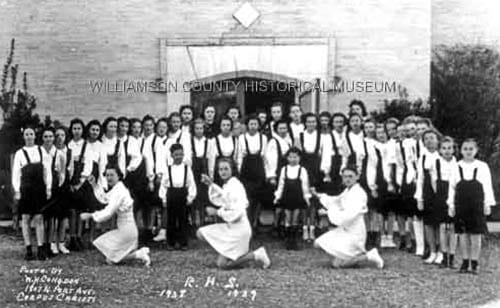 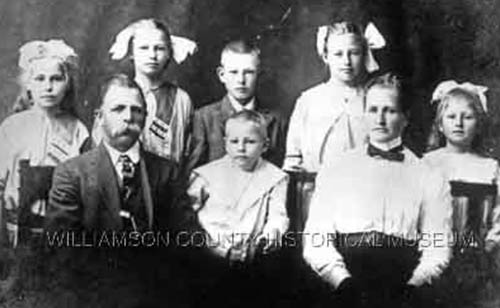 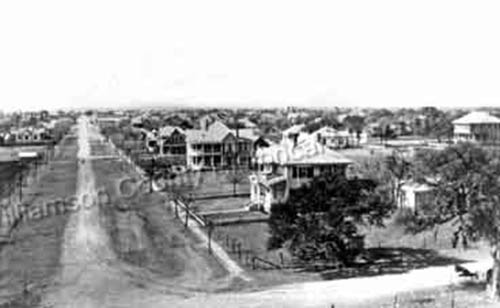 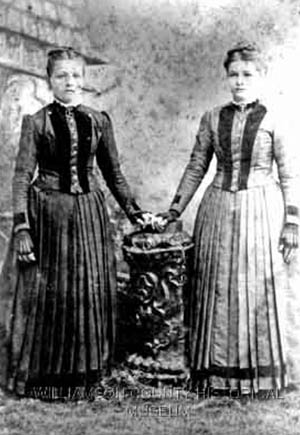 Image 8319
Marie and Julia Kohler in matching dresses, Round Rock, Texas, ca. 1892. The Krohlers immigrated from Switzerland to the US in 1885 and stayed with family and friends in Round Rock until they found a place to live. Photographer's imprint: "W.B. Praytor / Round Rock, Texas 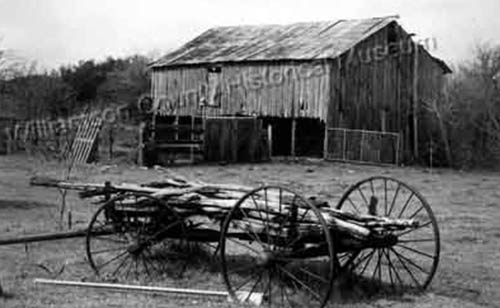 Image 9034
McNeese Farm at Merrelltown, south of Round Rock, Texas

Here are a few of the old structures in the old town of round Rock. 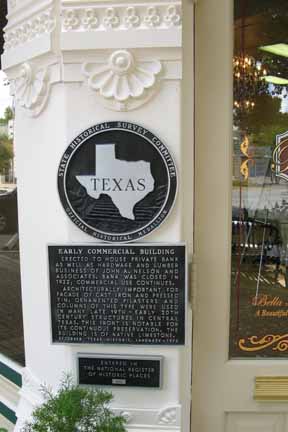 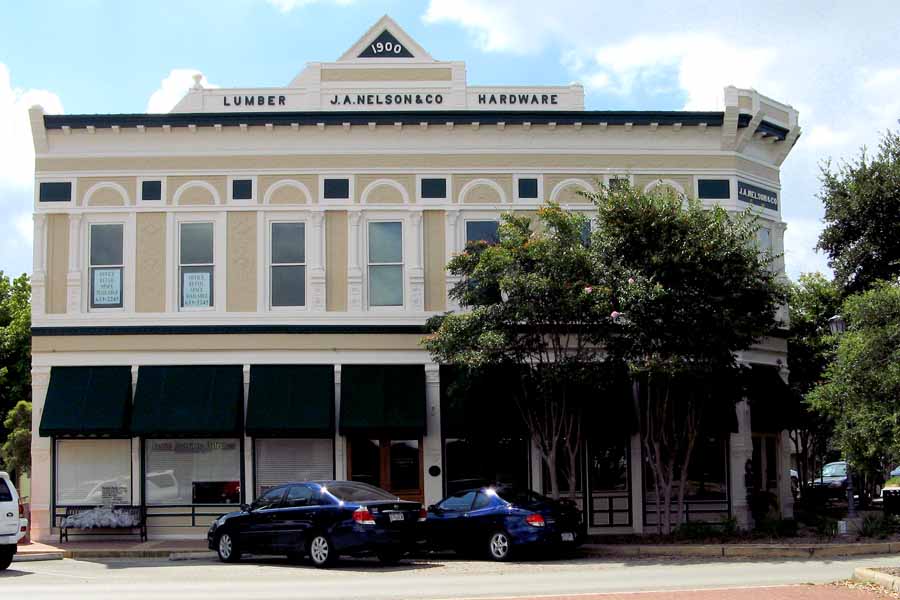 Marker text: Erected to house private bank as well as hardware and lumber business of John A. Nelson and Associates. Bank was closed in 1922; commercial use continues. Architecturally important for facade of case iron and pressed tin. Ornamented pilasters and columns of this type were used in many late 19th-early 20th century structures in central Texas. This front is notable for its continuous preservation. the building is of native limestone. Recorded Texas Historic Landmark - 1970 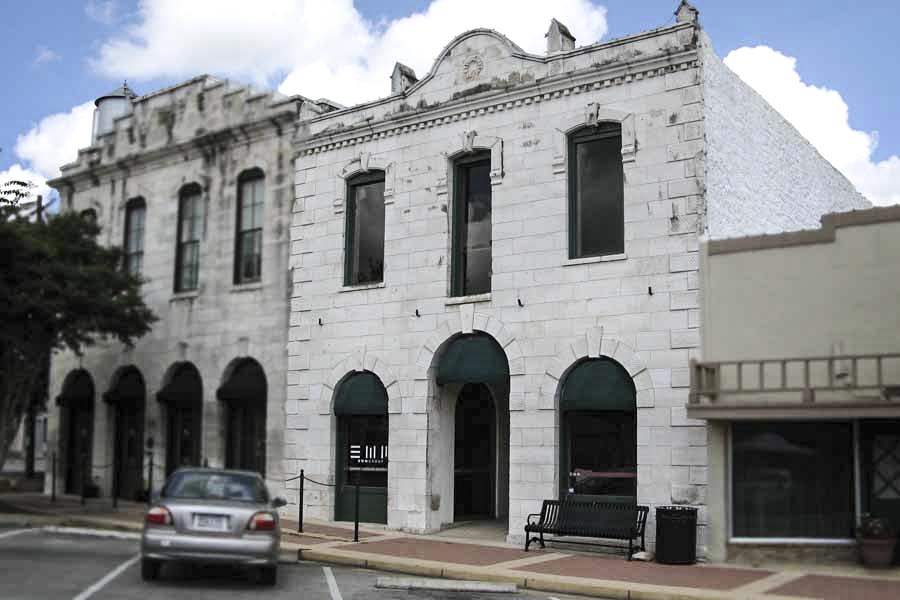 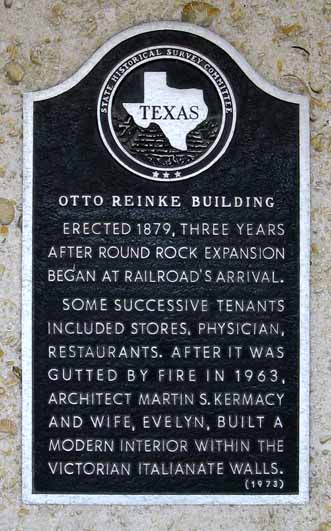 Marker text: Erected 1879, three years after Round Rock expansion began at railroad's arrival. Some successive tenants included stores, physician, restaurants. After it was gutted by fire in 1963, architect Martin S. Kermacy and wife, Evelyn, built a modern interior within the Victorian Italianate walls.

“In this day of specialties within specialties, The day of the Doctor who is a General Practitioner is passing, the Country Doctor - Family Doctor - General Practitioner, who devotes his entire career to one community, is practically unknown today. Such a doctor, however, was Dick Bolling Gregg,” “One who was so much a part of the lives of all of us here in Round Rock, one who for so many years devoted his precious time and energy to his community, much of it in the red brick building located to the left of this marker….and one who was cherished and loved by all his friends, neighbors, and fellow citizens, and who helped to mold our little town of Round Rock into the growing community it is today…. Our own beloved, Dr. D. B. Gregg.”

Other points of historical interest

The Historic Round Rock Collection: An Ongoing History

A collection of newspaper accounts, stories, articles and many other interesting and unique items. 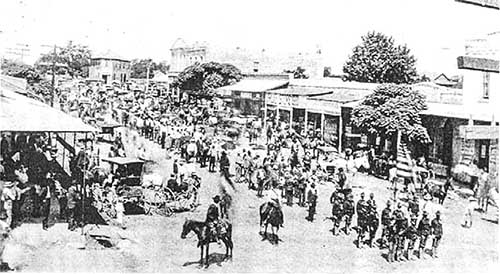 An excerpt from the collection of newspaper accounts, stories, articles and many other interesting and unique items. Round Rock, Texas, 1840-1965 (125 Years)

Uncertainty and obscurity prevent the fixing of an exact date for the beginning of Round Rock which was first called Brushy. As early as 1835 the area of Round Rock in Williamson County was providing opportunities for settlement by the white man. Tumlinson Fort was built west of Round Rock at the headwaters. Of Brushy Creek as an outpost for the protection of whites and friendly Indian$ of the area. The Comanche Indians were stern enemies of the Tonkawa, friendlier and more nearly civilized tribe which lived along the banks of Brushy Creek (called by eighteenth-century European explorers "Creek of the Blessed Souls"). Indian mounds and campsites are found in abundance from west of Round Reek in the Hutto area. Collectors of Indian relics continue to find, on the surface and through mound diggings, many fine relics left by the red man.

Four years after Fort Tumlinson was established, another fort was established about two miles east of Round Rock on Brushy Creek south of the present Palm Valley Lutheran Church. This fort was built by Dr. Kenney, a medical doctor in the Texas Revolutionary Army. Dr. Kinney, together with a pioneer Round Rock settler, Capt. Nelson Merrill carried on farming interests and capitalized on a good market for buffalo hides and mustang horses. Kinney's Fort, also called Fort Cazeneau, was the site of Texas' Archives War, the historic battle in which not one shot was fired. After this battle, the State Capitol was no longer in transit and was restored to Austin.

With the passing of Indian and Mexican opposition to white settlers, the forts were no longer needed and Round Rock was soon to emerge as a significant early frontier town. Many Swedish families, including the Nelsons, Jacksons, Gustafasons. Andersons, Johnsons, Berkmans, and Petersons came to Round Rock following S. M. Swenson, a fellow countryman who had well established himself in business and farming.

The town of Brushy came to be called Round Rock in tiff! Year 1859 when the first post office was established.

Very soon there was to be Old Round Rock and New Round Rock with Brushy Creek as a boundary line between the two early settlements. With the coming of the railroad in 1876, the Texas Land Company aided in developing a new townsite at the end of the line. As the westernmost limits of the railroad, Round Rock became a booming and prosperous trade center. Merchants came from San Antonio and Austin from the south and from settlements further west to pick up in wagons the merchandise and goods coming in by rail from the North and East.

The Texas, New Yorker, in its February. 1878 issue, describes the towns of Center.; Texas. Round Rock had 1.5011 people: Taylor had 250 settlers, Round Rock had fourteen general merchandise stores, four drug stores, four lumber yards, one bakery, six hotels, and other shops. (At this date Austin had only five hotels compared to Round Rock's six.) Texas, New Yorker stated this about Round Rock in 1878: "The trade of Round Rock is very extensive, and includes a large portion of Williamson County, the Counties of Burnet, Lampasas, San Saba, Mason, Llano, McCulloch, Concho. Coleman, and Brown and portions of Comanche and Hamilton Counties. . Round Rock is the actual gateway to ten of the finest and most rapidly growing frontier counties in Texas. . . "

With Round Rock's strategic location, educational institutions were established between the time of the Civil War and the turn of the century.

Greenwood Masonic Institute dates from the close of the Civil War. Soon after the establishment of this school, the Presbyterians established Round Rock Institute with a fine faculty of scholars front the North and East. Classical studies were stressed. Latin and Greek were offered on a four-year basis. Rev. C. II. Dobbs was the institution's distinguished principal. The Lutherans established Trinity Junior College, which continued until the early 1930s. With the closing of the junior college, there succeeded a children's home, then a home for the aged err the oldest campus in the eastern part of New Round Rock.

In the year 1870, John Wesley Hardin, "Fastest Gun in the West" came to Round Rock and graduated from school with his brother Joe. At this time Professor Landrum, a friend of the fast gun's Methodist Circuit-riding preacher father, administered a test to "Wes". As an able and "fast" strident, Wes passed the test and graduated. Wes Hardin, then eighteen years old, and with eighteen notches on his gun, was being pressed by the Texas Rangers who had followed him from Brenham where he had been gambling and attending horse races with Bill Langley, "The Texan".

Since in early days almost all Central Texas roads led to prosperous Round Rock, another notorious bad man found his way to the thriving town at the intersection of the Chisholm Trail and Brushy Creek. But it was a one-way trip to Round Rock for "Texas Beloved Bandit" or "Robin Hood on a Fast Horse,"— Sam Bass. Sam's attempted bank robbery led only to the digging of new graves after the fury of a gun battle on Main Street, Round Rock. Sheriff Crimes and Sam Bass went to their common and long home at the western limits of Old Round Rock while Frank Jackson, one of Bass' more fortunate accomplices, moved further west and; as the legend suggests, became a respected medical doctor in Arizona.

Significantly, both the good and bad grow side by side, even in Round Rock. If it can be said that Round Rock attracts bad men, it can also be said that Round Rock produces good men as well. Ira Aten, the protagonist of a new book by Hastings House Publishers—The Lone Star Man, portrays the dignity and prowess of the Texas Ranger. Aten was reared in Round Rock. Like Wes Hardin, Aten was the son of its preacher, but the similarity ended here. After a successful and colorful career as a Ranger, Aten retired to California and helped develop the Imperial Valley, which honors him by giving his name to one of its prominent streets.

Its educational system has been expanded and developed into one of the better systems of Central Texas. Banking and business in general are beginning to expand. An increase in the value of land is becoming phenomenally. Lime plants, stone quarries, and burned dolomite processing plants supply Round Rock with vigorous industry. Cattle and sheep raising together with farming keep the Round Rock economy stimulated.

Through the recent benevolence of Mr. and Mrs. Louis Henna, the Baptists of Texas have established in Round Rock one of their largest children's homes. Trinity Lutheran Home, under the guidance of the Lutheran Welfare Society, is expanding into one of the State's finest homes for the aged.

The expanding, historic town, superbly located as a gateway to the State Capitol and the Highland Lakes, keeps pace with Texas progress. Historically rich in pleasure and pathos, and as a mecca for a large area with beautiful homes on oak-shaded acres, the emerging suburban city of Round Rock continues to display an exciting blend of the old and the new.