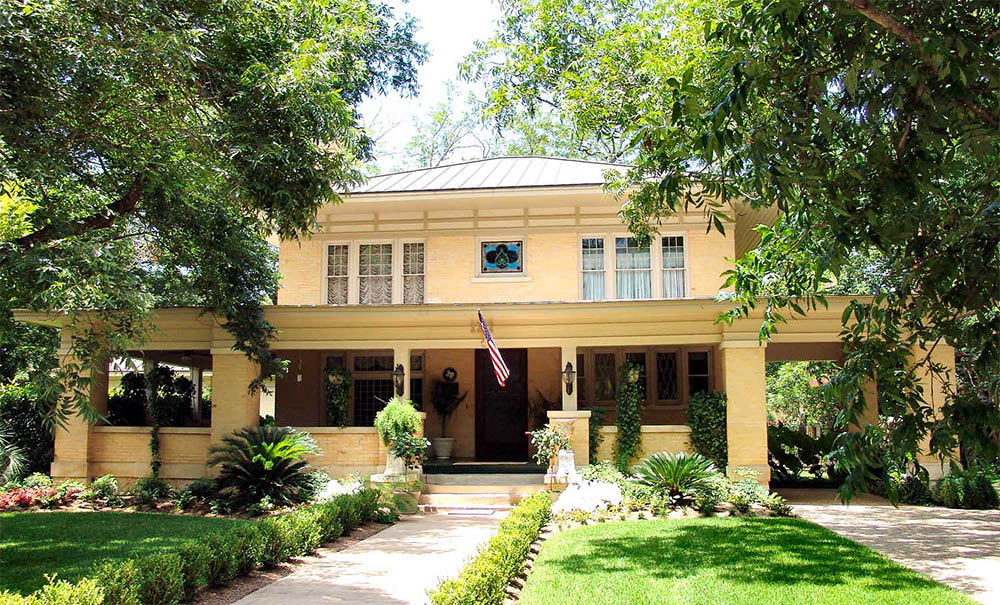 Marsh F. Smith House - This Foursquare house was built in 1908 by the Belford Lumber Co. for Marsh Fawn Smith (1875-1961), operator of a local cottonseed oil mill, and his wife Jessie (Cooper) (1879-1963). Smith served as mayor of Georgetown from 1926 to 1946, important years in the economic development of the city. Elements of the Marsh F. Smith House, including the broad eaves and wraparound porch with square columns, reflect the influence of Prairie School architecture. Recorded Texas Historic Landmark - 1988.

This Foursquare house was built in 1908 by the Belford Lumber Co. for Marsh Fawn Smith (1875-1961), operator of a local cottonseed oil mill, and his wife Jessie (Cooper) (1879-1963). Smith served as mayor of Georgetown from 1926 to 1946, important years in the economic development of the city. Elements of the Marsh F. Smith House, including the broad eaves and wraparound porch with square columns, reflect the influence of Prairie School architecture.

Throughout the latter half of the nineteenth century, cotton production was the most significant element of Texas' commercial agricultural economy. Despite natural problems such as Johnson grass and the boll weevil, cotton flourished in Texas well into the twentieth century. In 1880 there were approximately 2.5 million acres of land in cotton production, yielding a crop value of $5.7 million. By 1910, approximately half of the state's cultivated land was planted with what early settlers called the "cash crop". In 1928, one year before the economic depression that changed permanently the agricultural makeup of the nation, Texas produced a cotton crop valued at $447 million. [1]

In the early twentieth century, there was little reason to believe that cotton would not continue as the state's main crop. Increased production through such innovations as mechanical cultivators and the tractor, and a diversified, scientific approach to the utilization of the raw material enhanced the crop's value as a vital part of the Texas economy. The rich soil, abundant water, and favorable climate of Williamson County made it one of the state's primary producers of cotton. In the 1899-1900 growing season, Williamson County led the state with a processing total of 89,237 bales. The following year, although edged out by Ellis County, it increased the production to 104,761 bales. [2]

The success of cotton farming in Williamson County resulted in the development of Georgetown as an agricultural center.

The seat of government for the county, Georgetown was a logical site for support industries such as gins, presses, and cottonseed oil mills. It was in association with the latter that Marsh F. Smith became one of the town's prominent early business leaders.

Marsh Fawn Smith (1875-1961) was born in Rising Fawn, Georgia. The son of Mr. and Mrs. G. R. B. Smith, he moved with his family to Chattanooga, Tennessee, and later Sherman, Texas. In 1894, he came to Georgetown as a student at Southwestern University. Seven years later he married a local girl, Jessie Cooper (1879-1963), the daughter of Mr. and Mrs. J. E. Cooper. The Smiths moved to Howe, in Grayson County, but returned to Georgetown in 1907. That same year, Jessie gave birth to their only child, Fred Cooper Smith. [3]

Marsh Smith worked for a time as a cashier in the First National Bank, of which his father-in-law was president.

Later, he began working at the Georgetown Oil Mill, a business founded by Mr. Cooper in the early 1890s. Smith proved to be a good businessman and the company showed steady growth under his direction as president and manager. In the course of its existence, it was one of Georgetown's major employers and led in such innovations as the processing of fireproof cotton. The company remained an important supplier of cottonseed oil, feed, and cake into the 1950s. [4]

In 1909, Marsh and Jessie Smith contracted with the Belford Lumber Company to construct their home at 1242 Austin in Georgetown. The project was begun in February of that year and completed shortly before Christmas at a cost of $7067.40.° The two-story brick residence exhibits characteristics of the Prairie School style in the wide overhangs and expansive porch. The proportions of the windows enhance the overall horizontal design.

Detailing includes a finial treatment at the apex of the hipped roof, a porte-cochere on the north elevation, a two-story multi-sided window bay on the south side, massive square columns, and a stained glass window on the second floor, above the main entrance. The house also includes two interior brick chimneys, an unadorned paneled frieze on the top floor, a solid brick wall balustrade, and a raised foundation with a stone skirt-wall.

Since the Prairie School was a reaction to the elaborate and ornate detailing of the Victorian era, the location of the Smith House presents an interesting study in the evolution of architectural styles.

Adjacent to the property is the Belford Home, a fine example of the Queen Anne style. The two houses present a contrast in architectural thought and reflect the versatility of their builder, Charles S. Belford.

In addition to his business accomplishments, Marsh Smith exhibited early his interest in Georgetown's quality of life. In 1910, he was one of several local residents who led efforts to oppose the relocation of Southwestern University from Georgetown to Dallas. The proposal by some college officials proved to be quite controversial but, in June 1910, the Board of Trustees made the decision to keep the institution in Georgetown. An important factor in the decision was the amount of support shown by Smith, and others. [6]

In the second decade of the twentieth century, Marsh Smith became involved in local government.

He served as city alderman for six years before his election to the office of mayor in 1926. He would serve as mayor of Georgetown until 1946, overseeing municipal operations through the Great Depression and World War II. During his administration, the city purchased 150 acres for the enlargement of San Gabriel Park and secured aid from the federal government for the construction of an $800,000 municipal airport. Smith also helped coordinate the city's participation in such New Deal programs as the Works Progress Administration and the National Youth Administration, federal relief efforts designed to offset the impact of the economic depression. In his obituary, however, it is noted that he considered his greatest mayoral accomplishment the contract with the Lower Colorado River Authority to "furnish unlimited electrical power to the city. [7]

When he left political office in 1946, Smith also turned the oil mill operation over to his son. He continued his civic contributions, however, through his activities in Lion's Club, the Masons, and the First Presbyterian Church, of which he was a trustee. He died in an Austin hospital in 1961, the year after the death of his son, following a sustained illness.[8] Jessie died two years later. '

Following the death of Marsh Smith, his heirs decided to sell the residence at 1242 Austin.

The new owners were Thomas J. Moore and his wife, Daisy Jean (Montgomery). "' The Moores later divorced and in 1976, Mrs. Moore sold the house to Larry C. and Janet W. Crumpton. " Two years later, the Rev. Charles E. and Peggy Laing purchased the property." During their ownership, the Laings have made several interior changes to the house, including the addition of insulation and central air and heating. They also built a small sunroom on the west elevation where an earlier room had been removed.

The Marsh F. Smith House is a fine example of Prairie School architecture. It reflects the significance of cotton production in the early twentieth-century development of Georgetown. As the home of the man who served as mayor for twenty years, it is also an important reminder of his contributions to the city.