Take FM 971 west from Granger, Texas to the junction with CR 376. Turn on CR 376 and the cemetery is about 0.3 miles on the left and easily seen from the road.

According to local tradition, a congregation known as the O'Possum Creek Church built an all-faith sanctuary in this area as early as 1858. During the 1860s the Macedonia community began to develop as English and German immigrants settled in the area. During the 1870s Macedonia developed into a thriving community consisting of the Macedonia Baptist Church, a Masonic lodge, a gin, a granary, and a general store. A parcel of land which later included this cemetery was donated to the community by the S. A. Spiars family sometime prior to the first recorded burial here, that of J. C. Witt on April 22, 1874. Macedonia residents and businesses began to disperse after the town of Granger was established about two miles east of here in the Missouri, Kansas, and Texas Railroad in the early 1880s. Eventually, the last remaining physical evidence of the once-thriving community of Macedonia was this graveyard. Macedonia Cemetery was abandoned until 1971 when descendants of people buried here formed a cemetery association to restore and preserve the graveyard. The cemetery remains in use and includes the burials of pioneers of this area and their descendants and veterans of the Civil War. 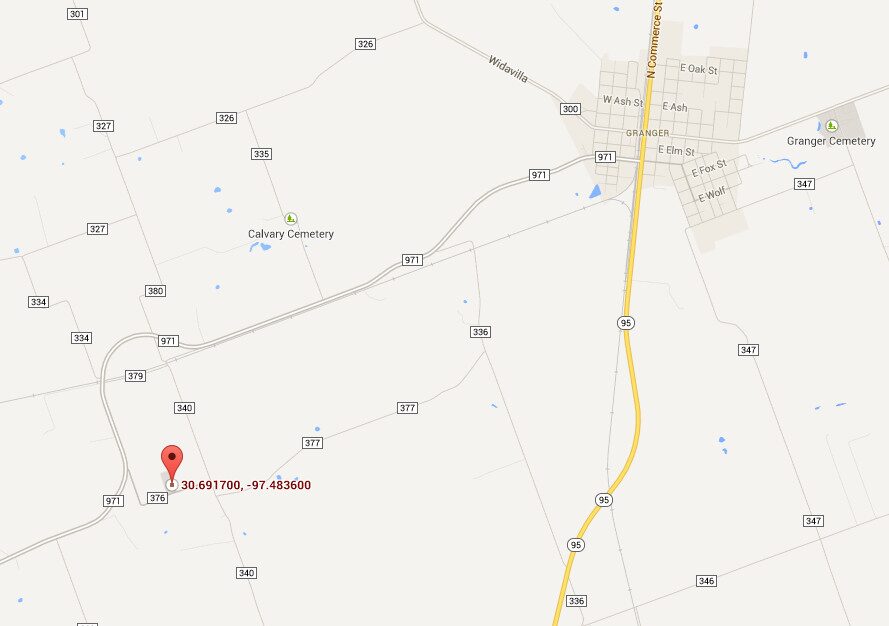 In the 1870s, a number of German families moved to the community. Macedonia Baptist and Methodist churches were organized at least by the 1880s. Camp meetings were held on the banks of Opossum Creek west of the church and cemetery. Louis Taylor built a gin there about 1885, later owned by Harvey Denson; Mr. Lyda and Mr. Vitek were also associated with it. A Grange association was formed by Macedonia farmers to handle their produce, with Jess Denson as president, J. M., and Harvey Denson, associates, and Jim Barnett, manager. As Granger developed, Macedonia churches, schools, and gin disappeared. School consolidated with Palacky in 1949. Today only a large cemetery marks the location of the village. Reverend J. W. McHorse, one of the founders of the Masonic Lodge at Macedonia, was a veteran of the Battle of San Jacinto.

In 1971, the descendants of all those who lie in Macedonia Cemetery, in a pastoral setting along O'Possum Creek a few miles west of Granger in Williamson County, formed an association whose goal was the restoration and preservation of a historic landmark....a cemetery that is all that remains of a once-thriving community. Macedonia Cemetery, today, bears visual testimony that the association's goals were realized. The once weed-infested site, overgrown with brush, today is a fenced, immaculately maintained chronicle of an important era in the history of this area. Moreover, something miraculous occurred along the way, something that was not a specified goal of the Macedonia Cemetery Association. As the members of the association came together to perform the physical labor of restoring the premises, bringing picnic lunches to share for sustenance, they formed a community of their own that survives to this day as they continue to gather at the site for their annual meetings. inadvertently, they have created a duplication, in spirit, of the community their forefathers formed, physically, in the late 1800s. (1) (7)

The early pioneers, most of English and German extraction, began arriving in this central Texas locale in the mid-1800s.

Most of their names Wright, Hawkins, Anderson, McHorse, Queen, Denson, Hogan, Scott, Mullis, Wilcox, Posey, Montgomery, Gardner, Barnett, Robins, Ederington, Spiars, Tidwell, Teer, Taylor, Tegge, Wood, Pope, Willis, Bogan, Van Zandt, Cook are etched in the tombstones of the cemetery they founded as they formed new lives for themselves in Texas, in America, in a community they named Macedonia. There is evidence that a church, known as O'Possum Creek Church, was established as early as 1858, and the building was shared by the Methodist and Baptist congregations for services on alternate Sundays. Records indicate that in the 1870s, the settlers established the Macedonia Baptist Church as well as a Masonic Lodge, followed by the construction of a gin, a school, a blacksmith shop, a grange, and a general store. (6) (2) (3)

We can only speculate; however, it would be realistic to assume that the very first death in the community or at least the expectation of such an event prompted the congregation of the church, in 1874, to determine to secure grounds for the purposes of interment.

A parcel of land was donated to the community by the S. A. Spiars family sometime before 1874. However, the first recorded deed of the property that became the Macedonia Cemetery appears in Volume 65, page 226, of deed records of Williamson County and is dated March 23, 1893.

During the 1870s, twelve people were buried within this cemetery.

It is impossible to determine how many of the original settlers are buried in Macedonia Cemetery.

Many may have moved on to other areas or perhaps even returned to their homelands. Many lie in unmarked graves on the site, but those whose births and deaths are recorded in stone within this enclave attest to a community that existed for a brief period of time. There are many so marked, the settlers and their descendants, waiting for the rest of their progeny to join them in everlasting repose in this peaceful and serene spot that is all that remains to bear witness to the fact that they lived, loved, and labored here for a moment in time. The demise of the community of Macedonia occurred as a result of the railroad's coming to an area a few miles to the east, to a community that would come to be known as Granger, a town that for a time in the late 1800s and early 1900s became a thriving, mini-metropolis with which the small Macedonia Community could not compete. Thus, eventually, it died. (6)

The Macedonia Cemetery Association, however, went to great lengths to assure that the community's demise would not obscure the fact that it once was an integral part of the settlement of this part of Texas. In 1875, the association erected a memorial at the site of the cemetery that reads:

"This memorial is a tribute to those who lie here in unmarked graves. Macedonia Cemetery. Early settlers in the 1860s established a church, a Masonic Lodge, a store, gin blacksmith shop, grange, and schools on the banks of O'Possum Creek. This cemetery is the last remaining landmark of the Macedonia community..."

It is thus ultimately fitting that the Macedonia Community, a rich part of the history of the state of Texas, be preserved in the state's historical annals by the designation of historical marker status to this lone survivor of its existence, the Macedonia Cemetery.

The Spiars family donated land for the Macedonia Cemetery.