Born in Chesterfield, Mass., Luther Stearns lived in the frontier regions of four states before moving to newly formed Williamson Co., Texas, in 1848. In 1850 he brought 650 acres on the San Gabriel River, where he built a 1-1/2 story log home and farmed the land. Upon his death, Stearns was buried near his home in the family cemetery, which was destroyed early in the 20th century. Near this marker is the grave of his youngest son, H. T. 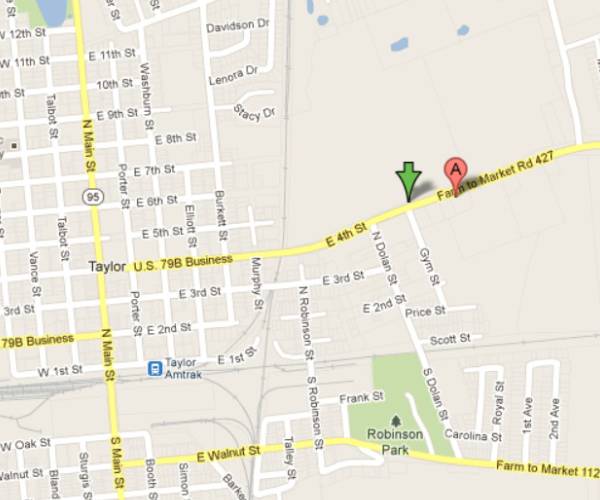 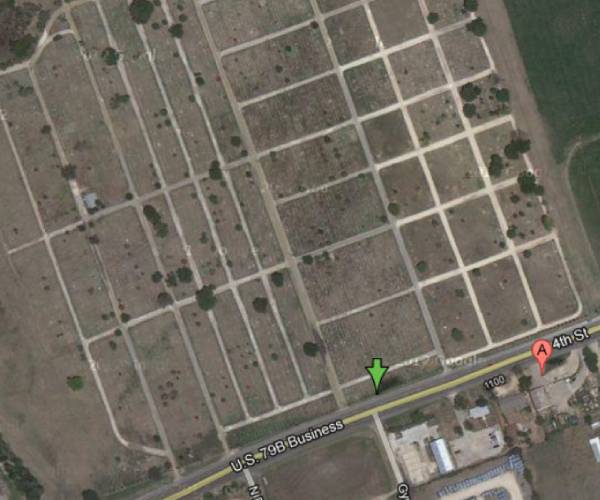 In 1848 Luther Stearns and those of his children not already married and well established in Illinois and a large number of his friends and neighbors prepared to move to newly-formed Williamson County, TX. About August they formed a train of 20 to 30 wagons to carry themselves and goods and began a three-month journey overland to Texas. His brother, Zara Stearns, and wife, and son, and Luther's younger son, Harvey, had settled on Brushy Creek, Williamson County, in 1847, and the plan was to join them. Luther was then 64, his wife 50. [10] During the long, arduous trip, Martha Stearns became ill and when the chill nights of autumn came, her con­dition worsened. She died early in November as the wagon train moved across Indian areas of Arkansas and was buried in an unmarked grave in the countryside. The same minister who had married Luther and Martha Stearns said her last rites. Before continuing their journey, the wagons circled over and over the newly-dug grave so that it could not be found and dese­crated by Indians. This story is retold by her great-grandson, the late Dr. Luther Stearns Mansfield, longtime professor of English Literature at Williams College, Williamstown, Mass., in his poignant poem entitled "Arkansas Burial, 1848." He based it on details recounted by his grandfather when Dr. Mansfield was 7 or 8 years old. (See attached poem.) [11] Luther Stearns and his children who were with him--Olive Stearns King and her husband, John W. King, Susannah, Luther Jr., John, Hannah, and David--reached Zara Stearns' farm on the south bank of Brushy Creek (about 21/2 miles south of present Hutto) about Nov. 18, 1848, where the family was reunited with Luther's youngest son, Harvey. In the spring of 1849 Luther Sr. planted his first Texas crop adjacent to his brother's place and, that same year, a daughter named Susannah was born to Olive and John King. [12] The crop was ruined by a flood. [13]

In a short time, Luther Stearns bought 650 acres of fertile blackland on the north bank of the San Gabriel River about eleven miles east of the county seat of Georgetown, paying Evan Williams $750.00 for it.

The deed was signed April 25, 1850; the land was from the Silas Palmer Survey [14] The farm included much rich alluvial soil along the flood plain, sufficient large tim­ber near the river for a substantial story and a half log house, and some limestone boulders which Harvey, then 13, and his older brother, Luther Jr., sawed into workable pieces for a fireplace and chimney. The home sat at the top of a crescent-shaped rise of land just above the flood plain, In later years, Harvey recalled his first boyhood impressions of the vast, open prairie of central Texas where, as far as he could see, only grass and cattle were visible. He remembered his first assignment on the farm, a job earning $.121/2 cents a day for dropping grains of corn through a tin spout on a hand plow run by Luther Jr. so that the grains fell at uniform intervals into the furrows as they were tilled. Harvey bought a pair of shoes with his money. His father made him a half-bushel container of galvanized metal with wooden staves to use when he gathered wheat in the neighborhood; he was paid one half‑bushel measure for his day's work. His father also taught him how to plant sweet potatoes in skips between stalks of corn to utilize all possible cultivated land, for breaking new land was a hard, slow task with hand-operated equipment of the day. Until 1857, the family got mail at Georgetown and likely much of their provisions which they had to buy. Nearer, however, was Circleville, which opened a Post Office in 1857 with James Eubank as postmaster. He and his two brothers, Joseph and William, had founded the village of Circleville in 1853, along with other relatives and friends, and soon offered services of a general store, tin and blacksmith shop, shop, molasses press, school, and church. In 1857, a mill was built at Logan Crossing, about 3 miles from Luther Stearns' hone, and one of the first cotton gins in the county was established downriver from Circleville about one mile.

Olive Stearns King (born June 15, 1821 in Ohio) died July 14, 1850 and was probably the first person buried in the family cemetery a short distance west of the new log home.

Two years later, Olive's younger sister, Susannah, married John King and they moved back to Illinois in a few years. [16] Several years after the log home was built, it burned to the ground, only the limestone chimney remaining unharmed and intact. Luther Stearns rebuilt, following his original plan and in the same place, utilizing the standing chimney. This house still stands in 1982, covered with siding on the exterior and paneling inside, but the chimney has been removed. Some of the hand-sawn limestone from the chimney as well as the half-bushel measure made by Luther Stearns are now in the hands of this writer, the great-granddaughter of Luther Stearns Sr. [17] John Stearns, who never married, died in 1853, but may have been buried on a place on the North San Gabriel River above Georgetown which he had bought. Luther Stearns' declining health seems indicated in a deed signed Jan. 14, 1859, in which he transferred his property to Luther Jr., David, and Harvey and to Susannah King. He died Jan. 26, 1859, and positive statements from several of his descendants in­dicate that he was buried in the family plot near his home. David, unmarried, died Feb. 26, 1860, and is believed to have been buried near his father. [18] Luther Jr. acquired his own farm, was married, and eventually moved to Paducah, Texas. Harvey married the daughter of Circleville postmaster and craftsman James Eubank in 1861 and made his home at Circle­ville. Using an ox team, he freighted for the Confederate Army during the Civil War and continued freighting from Galveston, Houston, and Brenham to Williamson County towns until railroads came to the area. Along with his four sons, Harvey T. Stearns operated about eight cotton gins throughout Williamson County. [19]

The Stearns Family Cemetery was a short distance west of the family home--the house on top of the rise of crescent-shaped land, and the cemetery just at the lower edge of the rise.

It is about 11 miles east of Georgetown to the south of Highway 29, is 2.2 miles east of the Mileham Branch bridge at Jonah, and 4.3 miles west of the Circleville intersection of Highway 29 with Highway 95. A water well still visible in 1982 is a few steps east of the cemetery site and until recently a tree stump (earlier, a tree, of course) also stood near the well at the edge of the cemetery. Family members definitely remembered that the plot had "several" marked graves and was fenced at least until after 1920, but after the land had passed from the ownership of the Stearns family in 1866, the cemetery was not well-tended. No deed was drawn putting aside the plot of land for cemetery purposes. Residents of the neighborhood believe that the area was plowed over in the 1930s and no visible remnants of the graves, markers, or fence remain. A granddaughter of Luther Stearns and the wives of two of his grandsons recalled being told definitely about the burial place of the grandfather. They were Myrtle Oral Stearns (Mrs. Leonard Daugherty, 1874-1954), daughter of Harvey T. Stearns, who pointed out the place where his father was buried; Addie Ellen Bowmer (1880-1978) who married Glenn Francis Stearns (1871-1948)--she taught at Easley rural School near the Luther Stearns place and had the site identified to her; and Margaret May Tegge (1892--now (1878-1975), living), Taylor, Texas, who married Auburn Clare Stearns / another son of Harvey T. Stearns. Margaret Stearns remembered having the cemetery pointed out to her after her marriage in 1913, and took this writer to the site to point out its location in May 1979. [20]