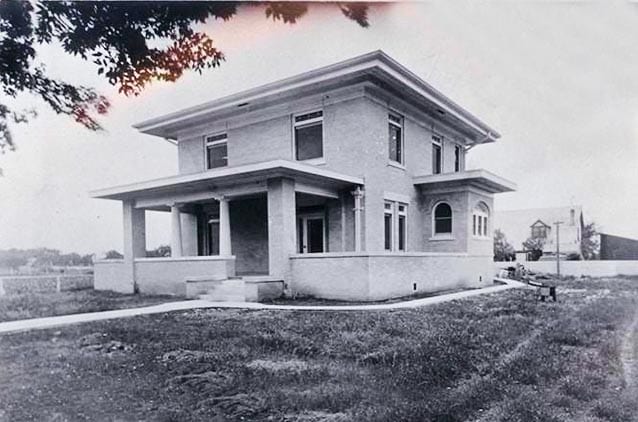 Inscription. The Belford Lumber Co. built this home in 1910 for local attorney Cooper Sansom (1863–1928). A former newspaperman, Sansom served as city attorney and later as state reprehensive and district judge. An active civic leader, he was also prominent in state programs of the Presbyterian church and the Democratic party. Cooper Sansom’s home features influences of the prairie school style in its wide overhanging eaves, low horizontal design, and Tuscan columns.

Georgetown experienced an era of sustained development during the early decades of the twentieth century. Although its population did not increase dramatically between 1890 and 1910, the town began its steady evolution at that time from a frontier settlement to a more secure role as a center of commerce, education, and government. A railroad tap line built to Georgetown in the 1870s became part of the Missouri Pacific system several years later. By the turn of the century, the operation was supplying regular transportation, communication, and raw materials that stimulated local business. In 1900, work was completed on the new main building at the Southwestern University campus. A decade later, work was in progress on a new county courthouse. As the seat of government, Georgetown benefitted from the development of Williamson County, which grew from a population of 25,909 in 1890 to over 42,000 by 1910. [1]

Just as the new courthouse reflected trust in the future of Georgetown, so did the construction of the residence at 1252 Main Street.

Completed late in 1910, it was built by the Belford Lumber Company of Georgetown. The project, along with others, provided a phoenix-like return for the firm, which had been destroyed by a fire the previous year. Charles Sanford Belford (1857-1929), president of the company and one of Georgetown's prominent business leaders, supervised all construction projects. His attention to detail and his reputation for quality craftsmanship are evident in the home and in his other projects, including the Palm Valley Lutheran Church near Round Rock and the First Methodist Church of Georgetown. [2] The contract book of the Belford Lumber Company for the period 1908-1911 shows the residence at 1252 Main was constructed between June and December 1910, at a cost of $6,751.60. [3]

A two-story buff-brick residence, it reflects the four-square design with strong influences of the Prairie School style. It features wide, overhanging eaves and an expansive front porch with Tuscan columns, a brick-wall balustrade, and an offset front entry with sidelights. The windows, of varying size and design, include decorative transoms. Of particular note are the window designs on the north elevation (the home faces east), which include paired windows under a single lintel and a round-arched window. The size and design of the home reflect Sansom's stature and his standing as one of the leading citizens of the community.

A native of Georgetown, Cooper Sansom was the son of Col. and Mrs. Richard Sansom.

He attended Southwestern University and later, with his brother-in-law and cousin, operated the local newspaper, the "Williamson County Sun," from 1878 to 1886. He studied law with the firm of Makemson and Price, passed the state bar exam, and began his local legal practice in 1888. As was common of young lawyers in small towns across the state, he also served as a city attorney (two terms). [4]

Very early in his professional career, Sansom established himself as a civic leader.

He was a trustee of the local school district for many years but was also active in the support of religious education. He was instrumental in the founding of Milford Presbyterian College and served on its board of trustees. The school, established in the Ellis County town of Milford in 1902, remained in operation until 1929 when it merged with Austin College in Sherman. [5] Sansom also served on the board of a Hill County Presbyterian orphanage which he helped create.

Cooper Sansom was interested in politics and served actively in the Democratic party.

In 1912, he was a delegate to the Democratic national convention. His role in the convention was in no way small; as part of the "immortal forty", the Texas delegation under the leadership of Col. Edward M. House, he helped secure the presidential nomination for Woodrow Wilson. [6]

In Georgetown, Sansom is perhaps best remembered as a legislator and a jurist.

He served as the state representative from Williamson County in the 26th Texas Legislature (1899-1900), participating in one regular session and one called the session. [7] In 1921, Governor Pat M. Neff appointed Sansom to fill the unexpired term of Judge Ireland Graves of Austin, who retired as a civil district judge of the 26th Judicial District. Judge Sansom subsequently won election to the post, and in 1924 the district was divided to include only Williamson County.

His success as a firm but a respected jurist is shown through the words of his obituary:

As a judge on the bench, he tempered justice with mercy, and no man ever convicted in his court left the bar without hearing his admonition to be brave and strong, accept his fate, and strive to be better as the days pass by. [9]

Judge Sansom died August 23, 1928, while in Fort Worth for medical treatment. The record shows the cause of death as a secondary infection." He has buried three days later in the IOOF (International Order of Odd Fellows) Cemetery in Georgetown. The notice of Judge Sansom's death appeared on the front page of the "Williamson County Sun", signifying his service to the community as a legal, political, religious, and civic leader. The words of the obituary, written in the elegant style of the era, leave no doubt about his contributions to his hometown:

He has done his work well, he has left the impression of his character and his exemplary life emblazoned high on the role of fame, and generations unborn will rise up and call him blessed. [10]

Judge Sansom was survived by his wife Anne, who died January 22, 1944.

Her will, written in 1937, left much of the estate to the Southwestern Presbyterian Home and School for Orphans (later the Presbyterian Children's Home) near Itasca, Texas.' [12] The family home at 1252 Main was sold as part of the settlement of her estate. The buyers, with a bid of $9,411, were Herman and Louise (Woodley) Sullivan. [ l3] Mrs. Sullivan was related to the Cooper family of Georgetown and was a distant relative of Cooper Sansom. Mr. Sullivan was a textbook salesman for the Charles Scribner Company and set up his office in the small building back of the house. In 1978, he became superintendent of the Carrizo Springs school district in Dimmit County, Texas, where he had worked before. He died there about 1993. [14] Subsequent owners of the Cooper Sansom House include J. H. "Buster" and Glynn Compton, 1956-1971; Gordon and Clare (Easley) Mashburn, 1971-1976; and W. E. "Bill" and Mary Kathleen "Kathy" (Cox) Corbett 1976-present. [15]

During the Compton ownership, a screened porch on the rear of the home (west side) was converted to accommodate a new kitchen, bedroom, and bath.

A new porch was added to the west side. The Comptons also added decorative wrought ironwork to the facade, but it was removed later during the Mashburn ownership. The Corbetts converted the rear porch into a sunroom and made the carport (added by the Comptons) into a garage. The Corbetts also replaced window screens to uncover the detailed window transoms. The screen treatment was suggested by Dick Ryan, architect for the Texas Main Street Project.

In 1984, the Cooper Sansom House was included in the multiple-resource nomination approved for listing on the National Register of Historic Places. A symbol of Georgetown's development in the early twentieth century and a reminder of a prominent jurist, benefactor, and civic leader, the residence is an important landmark in the town.