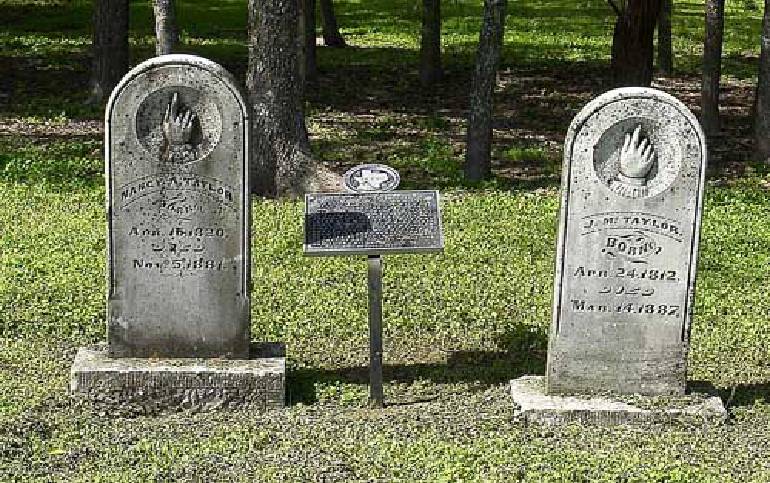 April 24, 1812 – March 14, 1887. Tennessee native John McQueen Taylor came to Texas with his family in 1829 as a settler in the Empresario Grant of Lorenzo de Zavala. Taylor fought in the Anahuac disturbances of 1834 and later, as a soldier in the Texas army, he participated in the Grass Fight and the siege of Bexar. An early justice of the peace in both Tyler and Orange counties, he later settled in Williamson county. He and his wife Nancy Ann had four children.

John McQueen Taylor was born on April 24, 1812, in Franklin County, Tennessee. Every time I found his signature, it was J.Mc.Taylor or John Mc. Taylor. He is wrongly listed in the book on Texas Revolution soldiers, as McTaylor, such as McDonald, McQueen, etc. So I shall refer to him as "Mc" in this narrative.

Mc came to Texas in 1829 at the age of seventeen, with his Father and Mother.

Mc's father, Owen Taylor was one of the earliest residents of Jasper County. He was born in Georgia in 1785. A bricklayer by trade, Owen was given a grant of one league of land. His grant was in two parts. One was on Walnut Run, between Sally Glenn and the Elijah Isaacks' leagues. The other was south of Magnolia Springs. He lived on the Walnut Run.

In July 1834, an express arrived from Anahuac, calling for volunteers to dislodge Col. Bradburn, a Mexican officer stationed there. Eight men from the Bevil's Settlement answered the call. Mc was one of them. Four others who volunteered at the same time were Joseph Grigsley, Jas. Chesher. Duke Gleen and Henry Stagner. They departed immediately, arriving at Liberty on the third day. There, they were under the command of Col. Hugh Blair Johnson. They left the next day for Anahuac. They were called the "Liberty Boys." After the surrender of Bradburn, Col. Johnson disbanded his men, and Mc returned home.

In the 1835 East Texas Census, Mc was listed as a single man, age 22, living in the household of his parents in Jasper County.

On the 17th of October,1835, I entered the Army of the Republic, under Captain James Chesher. They marched twenty days to reach San Antonio. During the time he was there, a call was made by Erasmus (Deaf) Smith for volunteers to reconnoiter and spy out the whereabouts of a Mexican force, reported as approaching that place with some 700 convicts. Mc volunteered and was with Deaf Smith for some twenty days. His kinsman, Squire Cruise, gave an affidavit to this fact, saying Mc did so against his advice. Mc was in the grass fight.

Adam Byerly, a lieutenant in Captain Chesher's Company stated that John Mc Taylor participated with him in the Siege and Battle of San Antonio, A.D. 1835.

Mc states in his application for a pension on May 23, 1874, that he served in the Company of Captain James Chesher, under the command of Generals Austin and Burleson, and that he was honorably discharged about December 20, 1835, because of illness.

A letter dated December 27, 1877, from the Comptroller's Office at Austin, states----This certifies that John Mc Taylor of Orange County, Texas has been enrolled as a pensioner under an act approved July 28, 1876. The pension from July 1 to September 30, 1877, amount to $ 37.50 unpaid. The appropriation being exhausted ---- a warrant cannot issue. *

In Mc's application for land, he states - he was a single man at the time of the separation of Texas from Mexico - which he has since married. A first-class headright Certificate was issued on the 4th of August, 1838, to John M. Taylor. He received three quarters of a league and one labor of land situated, with fronting on the east side of the Nueces River in San Patricio County.

Sometime prior to August 4, 1838, he married Nancy Ann. She was born on April 16, 1820, in Alabama. (I have not been able to find a marriage record for them.) Three daughters and one son were born to this union. In the 1850 Tyler County Census, he was listed with his wife, Nancy A.P., and four children.

4. John McQueen Taylor, II was born January 1, 1848, in Tyler County, Texas, and died July 2, 1905, in Orange County, Texas, and is buried in Harris Cemetery in that County. He married Synthia Jane Dunlap on April 18, 1872, in Orange. They were the parents of twelve children, seven living to maturity.

(Joyce Taylor Rosenbaum is the fifth child of this union.)

7. Evalena Taylor was born on February 26, 1896, in Orange, Texas. She died February 16, 1971, and is buried in Brookside Cemetery, Harris County, Texas. She married Sherman Dexter Raby on March 24, 1917, in Orange. This family was listed in the 1900 Census in Cameron Parish, Louisiana.

The date of the instrument is July 23, 1849. He was the original Grantee. He had sold most of his property, if not all of it, by June 1855. In the book. "TEXAS SCHOLASTICS" by Gifford White, Austin, Texas, he was listed as guardian for Elgiva, Susanna, Henryetta, and John M. Taylor in the Tyler County school.

John Mc. Taylor died on March 14, 1887, in Williamson County. He is buried in the Presbyterian Cemetery in Georgetown, next to his wife, Nancy, who preceded him in death on November 5, 1881.

These graves are located near the west fence in the southwest corner of the one block square cemetery.

Returns to Grand Lodge of Texas by Madison Lodge No.126 held at Orange, for the year ending December 27, 1863. Listed among the members is "Taylor, J. Mc." On the page listing members for the year 1889, on line 46, is this notation, "This line was left to hear from Mc. Taylor. He was reported dead."

9. "Narrative Of The Anahuac or Opening Campaign Of The Texas Revolution." TEXAS ALMANAC,1859.

The Williamson County Historical Commission and his descendants, under the leadership of Joyce Taylor Rosenbaum, wish to honor the memory of John McQueen Ttaaylor1812 - 1887) by placing an Official Texas Historical Marker at his grave in the Presbyterian Cemetery in the City of Georgetown, Williamson County, Texas.

We believe his service to Texas, in its fight for freedom from Mexico, merits this recognition. He was seventeen years of age when he came to Texas with his parents in 1829. The family was among the earliest settlers of the frontier, colonial Texas in what. is now Jasper County and helped develop that area.

In July 1834, John Mc Taylor was one of eight volunteers to go from his community, first to Liberty, Texas and then to Anahuac to dislodge Col. John Bradburn, a Mexican Officer stationed there.

In October 1835, he enlisted in the army of the Provisional Government of the Republic of Texas. He marched twenty days to reach San Antonio and participated in the siege and battle of San Antonio de Bexar.

He volunteered to go with "Deaf" Smith on reconnoiter and was gone twenty days and is credited with participating in the "grass fight." In civilian life, he served his community as Justice of the Peace in Tyler County in 1354 and, after moving to Orange County, served in the same capacity in 1872.

A member of the Madison Masonic Lodge No.126 in Orange, he was made a Master Mason in 1859.