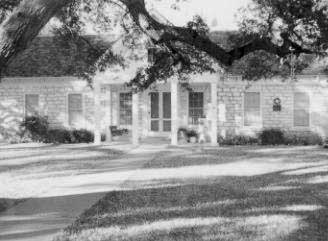 921 W. University
W. University (TX 29) 0.1 mi. W of bridge
The House faces south along West University (Hwy) 29 and is set back from the highway approximately 500 feet and hard to see from the road.

Built in 1866 by John Jones Dimmitt; of native limestone hauled by ox-drawn wagons. Home of prominent citizens in Georgetown over 100 years. Dimmitt -- a surveyor, lawyer, mathematician, linguist, one time county attorney, and partner in building of Georgetown Railroad -- was civic leader; instrumental in getting Southwestern University moved to Georgetown. Preserved since 1948 by Dr. and Mrs. R.W. Gamble. Recorded Texas Historic Landmark - 1967.

The John J. Dimmitt House is a 1-1/2 story stone dwelling facing south along with West University (Hwy 29) in Georgetown, Texas. The center-passage dwelling is built of cut-ashlar limestone and covered fin a large side-gabled roof with projecting gable over the principal entry Double wooden doors provide entry at the center of the house. Wooden 6/6 windows flank the doorway and form an A-A-A-BB-A-A-A arrangement. Mature live oaks surround the house with small shrubbery adjacent to the stone foundation. A 1-story garage is at the northwest corner of the house and is Noncontributing.

The Dimmitt House is a 1-1/2 story center-passage dwelling built of cut ashier limestone.

Resting on a stone foundation, the house is covered by a large side-gabled roof of wood shingles. Box eaves with jig-sawn brackets connect the expansive roof to the stone. A large gable-front portico with a window extends from the center of the house and rests on four square wooden posts set on a concrete porch. This alteration dates to 1948. Gable end interior chimneys rise above the roof-line and end in corbeled caps. A metal cresting runs along the ridgeline of the roof adding a Late Victorian element.

All windows are 6/6 wooden double-hung with screens. Double wooden doors with screens are centered on the facade.

A Noncontributing 1-story garage is northwest of the dwelling.

The John J. Dimmitt House (ca. 1870) is a good example of late 19th-century vernacular architecture and the home of one of the community's leading citizens.

The center-passage house is constructed of local ashlar-cut limestone but built in a traditional form. It is one of Georgetown's earliest buildings in this form and associated with the multiple listing: Historic Resources of Georgetown, Texas (NR 1986). Dimmitt was active in the early social and economic development of Georgetown. Thus, the house is nominated under Criterion B for its association with John Dimmitt in the areas of Commerce and Social/Humanitarian at the local level of significance.

John J. Dimmitt came to Georgetown in 1859 but returned to his native Missouri in 1861.

In 1864 Dimmitt again moved to Georgetown and purchased a lot near downtown. Dimmitt gradually began to buy land around Georgetown for raising livestock. In 1866, he is shown on the Williamson County tax rolls with 4,814 acres, 536 horses, and 2,911 head of cattle. Although his land holdings at times were quite large, he did not own any land in the C. Stubble field Survey until 1870. Dimmitt is listed with the Texas State Comptroller as the owner of a 10-acre tract of land in this survey in 1870 with a given value of $400. Thus, the Dimmitt House is dated as ca. 1870.

John J. Dimmitt became a leading citizen in Georgetown and Williamson County during the 1870s and 1880s.

Local historians believe that he was a surveyor, lawyer, mathematician, linguist, and also held elected office in the county. He is believed to have been among the organizers of Georgetown College, a predecessor of Southwestern University, and to have been involved in attracting Southwestern to Georgetown. Dimmitt also became one of the Georgetown citizens invested in the Georgetown Railroad Company. Chartered in 1878, the company built a rail line to Round Rock (10 miles) for service to the International and Great Northern Q&GN) Railroad. The line was not profitable and was sold under foreclosure in 1879 to the I&ON. Although this investment was not financially successful, it is another example of Dimmitt's efforts to build Georgetown. He was also interested in the social and educational advancements in Georgetown and donated 200 acres of land behind his house to the Texas Chautauqua Assembly active in the late 19th century. The Chautauqua became a significant social organization for Georgetown and the surrounding areas.

The Gambles updated the property and added the gable-front portico in 1948. In spite of these changes, the Dimmitt House retains a significant part of its integrity.

T. J. Caswell was the foreman of the Williamson County jury that returned the first guilty verdict in US history against a Ku Klux Klansman, Murry Jackson of Taylor, in 1923, for flogging and tarring a white man, sentencing him to five years in the state penitentiary, the maximum sentence allowed by law.