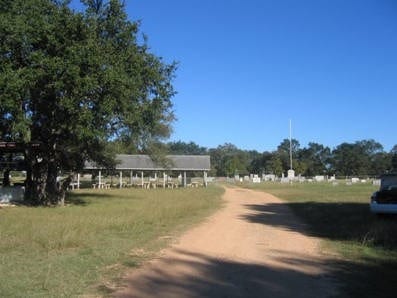 North from Georgetown on I-35, L on US 195, .2 miles to gravel road on right side, turn right and travel .1 mile to cemetery entrance 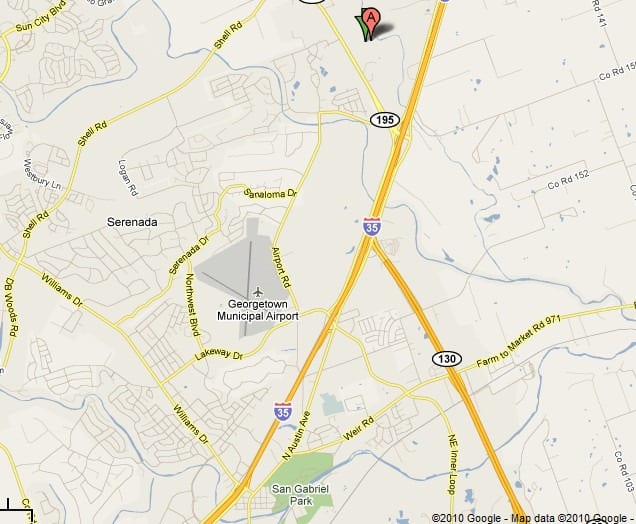 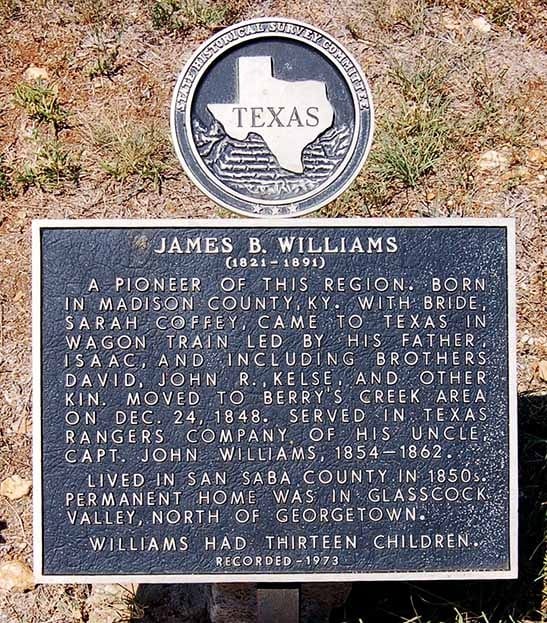 (1821-1891) a pioneer of this region born in Madison county, Ky. with bride, Sarah Coffey, came to Texas in wagon train led by his father, Isaac, and including brothers David, John R., Kelse, and other kin. moved to berry's creek area on Dec. 24, 1848 served in Texas rangers company of his uncle, Capt. john williams,1854-1862. lived in San Saba county,1850s. permanent home was in Glasscock valley, north of Georgetown. Williams had thirteen children. recorded 1973

A special thanks to the Williamson County Genealogical Society for letting us post this slice of history.

James B., son of Isaac and Sabra (Brutton) Wiliams, was born in Madison County, Kentucky. He married Sarah Coffey in 1839. She was also Kentucky born. The young couple left immediately as members of a wagon train bound for Texas and led by the father, Isaac. Isaac's other sons, who were members of the train, were Kelse, John R., and David. There is evidence that one son, Mason, and a daughter, Charity (Mrs. William Bowers), remained in Kentucky.

The wagon train ran into difficulty and halted in Arkansas. Isaac became very ill and was unable to continue the journey. It seems all of his family remained with him until he finally died and was buried in Washington County, Arkansas. He may have lived for a while and owned property at Crab Orchard Springs.

After the death of Isaac, the wagon train was reorganized under the leadership of James B. and set out once again for Texas. The Williams Brothers were known for their appreciation of fine horses and bought a sizable herd of Kentucky bred stock with them. As they crossed a river, presumably the Trinity, a terrible fight took place between our men and desperadoes who tried to take their horses. The story handed down is that one young man, thought to be "addled," received a vicious blow on his head with a gun butt or stick. For days his life hung in the balance, but he did recover, and afterward, he was a changed person and not simple-minded in the least.

The destination of the family was Central Texas, here some kindred had settled earlier.

On Christmas eve, 1848, they finally reached the Berry's Creek area, a community five miles north of Georgetown in Williamson County. According to Elizabeth, James B.'s oldest daughter, just as the weary travelers had settled down for the night with a feeling of thankfulness for having, at last, reached the journey's end, the quiet of the night was shattered by the cries of a young mother¬-to-be. That night a baby girl was born, delivered by Sarah Cooper, mid-wife. The child's name and parentage are not known to us.

Among the relatives who had migrated to Texas earlier was Captain John Williams, the famous Indian Scout. About this time, he was appointed by Governor Sam Houston to head a militia of men of his own choosing to protect the settlers from the hostile Indians. The Indians were coming down from the north and west plains of Texas and were raiding the farms and ranches in San Saba, Leon, and Burnet counties. They drove off the ranch stock in great numbers and even took the work stock and milk cows. It was not safe for women and children to be left alone, for these were not the friendly Indians of Central Texas, but migrants from the plains who delighted in scalping the women and stealing the children. They stole the provisions the settlers had stored for the winter and wrecked and set fire to the houses. There is on record a letter to Governor Houston signed by 183 citizens in and around Georgetown requesting the appointment of Captain John Williams.

By October 1858, Lieutenant John Williams had been promoted to Captain of the Second Company of hand-picked Texas Rangers and stationed in San Saba County.

The mustering out roll showing John Williams, Captain, dated 2 November 1858, bears the signature of James B. Williams, First Sergeant. We know that James B. first served as a private, but we do not know the date he enlisted. His brother, Kelse, enlisted in the same company under Captain John Williams on 24 May 1858, and D. K., (probably David) enlisted on 30 October 1858. John R. Williams, the third brother, taught the first school at Cherokee and was postmaster there for some time. We are not sure about what happened further to John R. and David and whether they have living descendants today. We do know that Kelse met a tragic and untimely death at Cherokee. One version of the story is that he was shot from atop the first schoolhouse in Cherokee. The story goes that the neighbors had met to build the schoolhouse, and while he was working on top, he saw thieves cutting their horses loose from their stakes, and the thieves shot him before he could give the warning to the men inside. He left three small girls and a son, Watt. Watt moved to New Mexico, and his descendants still live there.

Captain John owned a fine white stallion that could outrun anything in that locale. It was his custom to seek out the hostile Indians, make a strike, and then outrun them to safety. The very sight of this tall man on his superior white horse frightened the Indians and kept them at a distance. One day Captain John, joined by a fellow scout, encountered a group of Indians who stayed to fight. The two men were outnumbered and started to run their horses home, but the slower horse was shot, and Captain John went back to save his friend. He pulled him up on his white horse, but the two heavy men were too much for the gallant stallion, and the Indians were almost upon them. Captain John was adept at hiding from the Indians, so he dismounted, insisting that his friend ride on. He tried to hide under some leaves and brush in a gully, but this time he was found and killed, his body brutally beaten by the savages. This was at Baby Head in Llano County. He is buried at the Hannah Cemetery in Cherokee. On 16 January 1973, we were directed to his grave by Judge Raymond Gray, whose mother was the granddaughter of Captain John. The original gravestone has crumbled, and a nice new one has been erected, apparently within the last few years. The inscription reads:

CAPT. JOHNNY WILLIAMS, BORN 1798,
KILLED BY INDIANS OCT. 2, 1862
DONATED THIS CEMETERY PLOT TO THE PUBLIC. THIS STONE ERECTED BY FRIENDS AND RELATIVES.

We do not know just when James B. moved his family to San Saba County.

He lived there for a few years between 1852 and 1862 while he was serving with the Rangers. After the death of Captain John, James B. moved his family back to Williamson County. It is believed he built the old Williams house in Glasscock Valley, about twelve miles north of Georgetown. The original has been enlarged, and immense bran stands nearby. His great-great-grandson still lives there. It was here that Sarah died in 1862, and here James B. lived out his life among his children's grandchildren. He engaged in stock farming ranching and was an honored and respected citizen.

Sarah, the mother of ten of his children, is by his side at Berry's Creek Cemetery.

Following is a list of and some brief information regarding the children and grandchildren of James B. and Sarah Coffey Williams:

Mason, born 1840 in Arkansas, married Emily Houston, first cousin to Governor Sam Houston. They lost several infants but raised at least two children to adulthood — Milton and Mae. Mason was a beloved member of the Berry's Creek Community and a minister in the Christian Church. He and most of his family are buried at Berry's Creek.

Elizabeth, born in 1842 in Arkansas, married John Mankins, who was killed in the Civil War. They had one son, James. She then married William M. Howell. They owned and operated the Howell Ranch, fifteen miles northwest of Georgetown. Their only daughter, Ann, married Tom Keener and died in childbirth. One son, Jackson, died in his youth. The remaining six Howell boys, Spencer, John, Tom (twins), Henry, Kelse, and Bennie, all grew to old age and were prominent cattlemen and stock farmers. Tom and Henry founded the Howell Commission Company in Fort Worth. They have many well-known descendants in Dallas, Houston, Corpus Christi, and San Saba.

Isaac Milton, born 19 April 1844 in Washington County, Arkansas, volunteered for service in the Civil War and served in Company "A," Morgan's Cavalry.

The Isaac Milton Williams Ranch was known as the M Bar Ranch (M) and consisted of thousands of acres of the finest ranch land in the county, with headquarters in the late 1800s and early 1900s being about five miles north of Georgetown, just south of Berry' Creek on the old Florence Highway. Later, after the death of Isaac M., a new home was built on the southern part of the ranch where Southwestern Shopping Center is now located. That remained the headquarters of the M Bar Ranch, as Mrs. I. M. Williams operated it until about 1935 when she was forced to sell the cattle, which numbered in the hundreds, as she was r longer able to operate it, being about eighty-five yea] old at that time. She died on 22 May 1937. Many of the t17 descendants of this pioneer family live in and around Georgetown. Their last living child, Fannie Sudduth, died in 1971.

I am indebted to Mrs. Beatrice Walker, a gram daughter of Isaac M. Williams, for much of the information concerning this family and for encouragement in the undertaking to erect a historical marker at the grave of our great grandfather.

They live in a large farmhouse east of Georgetown known as the Mankins Place. They raised several children. She and her husband are buried in the Odd Fellows Cemetery at Georgetown.

David, born in 1847 in Arkansas, volunteered for service toward the end of the Civil War. Upon his n turn, there was a party at his father's house to celebrate his homecoming. David fell dead at the party, apparently from a heart attack.

Melinda (Lynn) married Wesley Salyer. She died in childbirth. Lynn was called our little Indian Aunt E, her brother Kelse's children. She loved to play games with the children and with her dark hair and eye showed her Indian blood, perhaps handed down from her Maryland ancestors. The story is that in the early or middle 1700s, one of the Williams men in Maryland married an Indian princess, and every now and her beautiful black hair and eyes show up in one of her descendants.

Its History and Its People

COMPILED AND EDITED BY

Manufactured in the United States of America
By Nortex Press
A Division of Eakin Publications, Inc., Austin, Texas 78735

ALL RIGHTS RESERVED. No part of this book may be re­produced in any form without written permission from the publisher, except for brief passages included in a review appearing in a newspaper or magazine.

A TEXAS SESQUICENTENNIAL LIMITED EDITION
This is Book Number 787