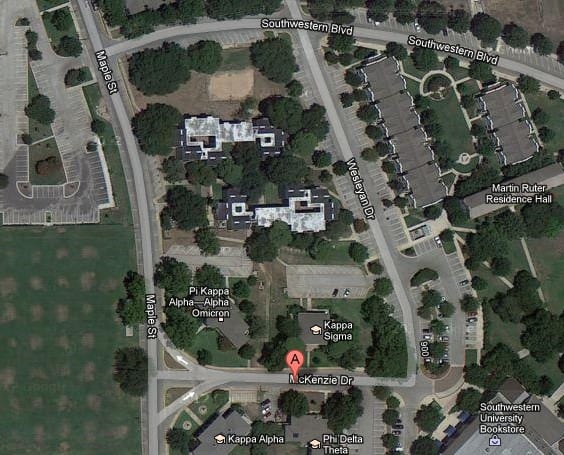 The Kappa Sigma Fraternity traces its traditions to 15th century Bologna, Italy. Its founder, Manuel Chrysoloras created the order for the protection of students of the University of Bologna. The Students banded together to protect themselves from the unscrupulous governor of the city, Baldassarre Cossa. [3]

The traditions were brought to America by the five founders of Kappa Sigma in the "new world" William Grigsby McCormick, Frank Courtney Nicodemus, Edmund Law Rogers, Jr., George Miles Arnold, and John Covert Boyd at the University of Virginia on December 12, 1867. The fraternity in the following years spread to universities throughout the nation. [4] The Star and Crescent of Kappa Sigma is now a part of 226 universities across the nation and in Canada. [5]

Iota is the 27th Chapter to be founded in the United States, the second in Texas. [6] Iota begins its life at Southwestern as a sub rosa organization until its recognition by the University on June 20, 1887. [7]

Iota has initiated some 900 men during its first 100 years at Southwestern.

[8] Among these men, the Chapter has many distinguished alumni. Most notable, although certainly not alone, is the Honorable John G. Tower, former United States Senator from Texas. Tower has served the fraternity as Worthy Grand Master and was honored by the fraternity as Kappa Sigma's Man of the Year in 1961. [9] Also notable is Mr. Edward A. Clark, former U.S. Ambassador to Australia and Secretary of State (Texas).

He must be a gentleman . . . a man of honor and courage . . . a man of zeal, yet humble . . . an intelligent man . . . a man of truth . . . one who tempers action with wisdom and, above all else, one who walks in the light of God. [9] This chapter has been a special part of the lives of the men who have been members, of Southwestern University, of Texas, and indeed of the Nation.