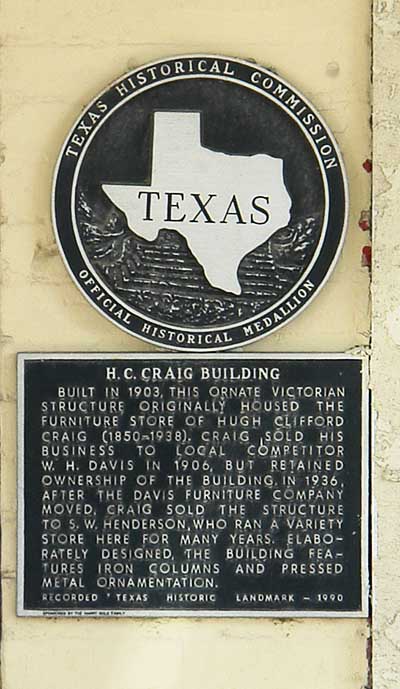 Built in 1903, this ornate Victorian structure originally housed the furniture store of Hugh Clifford Craig (1850-1938). Craig sold his business to local competitor W. H. Davis in 1906, but retained ownership of the building. In 1936, after the Davis Furniture Company moved, Craig sold the structure to S.W. Henderson, who ran a variety store here for many years. Elaborately designed, the building features iron columns and pressed metal ornamentation

In recent years, Georgetown has established a reputation as one of the nation's leading success stories in the field of historic preservation. One of the earliest Main Street cities, it has developed a preservation ethic and heritage awareness that have far outlived the initial programs and projects. A central element of the community's successful efforts is the courthouse square, the city's first designated historic district. Surrounding Williamson County's 1910 courthouse is a relatively intact town square with structures dating from the late nineteenth century.

One of the landmark structures on the square's north side is the H. C. Craig Building.

It was constructed in 1903 for the furniture business of Hugh Clifford Craig (1850-1938). A native of Chesterfield, South Carolina, Craig moved to Texas at the age of nineteen. It is not known when he settled in Georgetown, but an advertisement in the local newspaper showed he had opened a store on Brushy Street by January 1900. (1)

In September 1903, he signed an agreement with Mrs. Lou Etta Booty, owner of adjacent property, legally correcting an oversight that threatened to encumber the completion of his building. The agreement was necessitated by the fact that nine inches of the wall on the structure's east side extended onto the Booty property. The brick and stone wall, according to the document, was eighteen inches thick... (2)

Newspaper advertisements indicated Craig moved into his new building in the fall of 1903 The cost of new construction evidently took its toll, however, because it did not appear that his inventory was fully stocked until almost a year later. In September 1904, Craig's ads touted the "Big Furniture Store," a structure large enough to accommodate the contents of a 24,000-pound railroad car filled with merchandise. On September 22, 1904, he proclaimed through his ads: "My Stock is Now Complete. (4)

By the end of 1904, however, there were indications that Craig's business might be in trouble.

Despite the promotion of such items as iron beds for $2.50, wicker rockers for $1.75, and wooden rockers for 90 cents, he faced stiff competition from the W. H. Davis furniture store, an expanding company that advertised more frequently and with larger promotions. During the Christmas season in 1904, Craig countered with a large sale, noting: "The price is reduced to close out the large stock on hand to pay my bills." This would appear to be normal commercial rhetoric, except that the announcement was followed by smaller and less-frequent ads. (5)

In the summer of 1906, Craig began promising a major sales promotion that would be detailed in upcoming issues of the local newspaper.

When the time came for the scheduled event, however, there were no ads for the Craig Store. Finally, on November 29, 1906, the "Williamson County Sun" explained the delay with the following headline story: "Davis Buys Out Craig:"

Last Saturday a business deal was effected by which Mr. W. H. Davis became the owner of the large furniture stock of Mr. H. C. Craig on the north side of the square. He, also, rented from Mr. Craig his storeroom (the largest in Georgetown) and will continue the business at the same stand. In addition to this Mr. Davis has rented the lower floor of the Odd Fellows Temple, which he has occupied several years, and will continue the furniture business there, also. With these two large stocks under one management, Georgetown will possess one of the largest and most complete furniture emporiums in any of the interior towns of Texas. (6)

As the article noted, Craig retained ownership of the store building, although he soon moved to Austin.

The new tenant, W. H. Davis (1862-1940), was one of Georgetown's most prominent business leaders. A native of Americus, Georgia, he came to Texas in 1886 .and lived in Bryan before moving on to Georgetown in 1892. He began his business career as a merchant, operating a dry goods business. Later he established his furniture business and built it into the largest in the area. In a sequence of events not uncommon among furniture store owners in small towns, he began selling caskets and eventually became an undertaker. The funeral company he started continues in operation to this day."

He served on the local school board for 27 years and was president for much of that time. He also served on the city council and as a leader of the Presbyterian church. When he died in 1940, his obituary noted:

Mr. Davis had been in continuous business in Georgetown, possibly more than any other one man. . . His reputation as a businessman is well known throughout Central Texas, and his friends in the state are legion The obituary also provided insight into funereal customs observed at an undertaker's burial service, noting: "Many other funeral directors were present and formed a line from the residence to the funeral car." Davis' survivors include his wife, Ollie Fisher Davis, whom he married in 1895, and five children. (9)

Although W. H. Davis never owned the Craig Building, it housed his business from 1906 until the 1930s.

Since he owned other buildings on the same block, he controlled most of the square's north side for much of the early twentieth century. In 1936, H. C. Craig terminated his association with his commercial building, selling to Sam W. Henderson. Two years later, Craig died at his Austin, residence (703 W. 23rd Street) and was survived by his wife, Emma Jack Craig (1858-1947), and five children. (10)

The Henderson Store was a variety business, an operation referred to in the vernacular as a "5 and dime." The elder Henderson began the business in 1910 and transferred it to his son in 1928. In 1947, Sam W. Henderson took in two partners, Wallace G. and Edward Lee Evans, retaining a 60% ownership. Edward Evans eventually became the sole owner of the business, but the building remained the property of Henderson and, following his death in 1969, a part of his estate. When Evans eventually sold the business, Georgetown businessman Harry Gold purchased the Craig Building. It housed several renters until the 1980s when Gold restored it to its original appearance and adapted the interior for expansion of his successful clothing business. (11)

The H. C. Craig Building is a two-story Victorian-era commercial structure with an ornate storefront designed by the Mesker & Bro. firm of St. Louis, Missouri.

The H. C. Craig Building is an important commercial landmark in Georgetown and a major element in the city's t historic square.

Restoration of the structure served as an impetus to the Main Street project and to subsequent preservation programs adopted by the municipal government and the Georgetown Heritage Society. It now serves as an important reminder of Georgetown's dramatic economic growth at the turn of the century and of the prominent business leaders with which it has been associated over the years.