Settlement in this area began in the 1870s. The Wilder family operated a cotton gin, grist mill, blacksmith shop and general store. Other pioneer residents included the Allcorn, Watson, Casey, Gambrell, Gregory, and Howe families. By the 1890s the community was named Gano in honor of Confederate general R.M. Gano and included a post office, school and church. The town began to decline after the general store closed. The church building was not rebuilt after a storm, and the school was consolidated with Milam County schools in 1919. Few vestiges of the town remain. 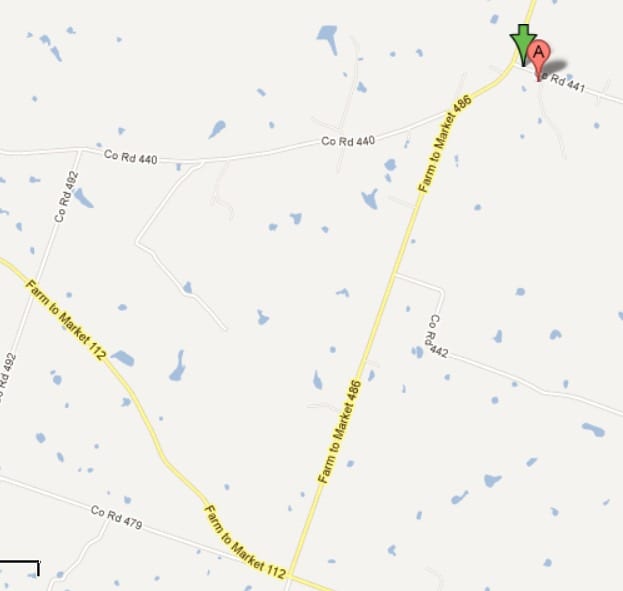 The community of Gano [pronounced Ga-noh'] was named for Confederate General R. M. Gano, who organized the Christian Church in Taylor, Texas in 1877 [1]. General Gano is also mentioned in the early history of the Disciples of Christ Church records as having started numerous rural (mission) churches and served on the board of the state committees of the early church in Texas. [2]

Known as Gano at least since the 1890s, this small settlement was located on the headwaters of Yegua Creek in the Harrison Owen Survey in southeastern Williamson County about 6 miles south of Thorndale at the present intersection of County Roads 486 and 441 near the Milam County border. [3] In 1996, no visible landmarks of this early settlement remained.

By the end of the Reconstruction period following the Civil War, Indian tribes in Williamson County had been subdued, and the period between 1876-1900 brought sweeping changes.

Five separate rail lines were built through or within the county, the first of which was the extension of the International and Great Northern line from Rockdale to Thrall. Providing a means for exporting local produce, as well as shipment of commodities from distant markets, the rails ushered in a wave of new settlers, especially to the eastern section of the county. [4]

The families of John Rhett Wilder, James Campbell Watson, P. C. Casey, W. H. Gambrell, Jasper Casey, Andrew Howe, J. B. Gregory, Thomas Watson, and Elijah H. Allcorn were among the first to settle at Gano, [5] an area they found particularly attractive because of its plentiful post oaks and good water supply from wells fed by springs. From the beginning, the economic base of Gano was agricultural, with farming and cattle generally combined on each farm. Rich sandy loam was abundant for raising corn, cotton, watermelons, sweet potatoes, and peanuts. Two roads, the Rockdale-Elgin road, and Thorndale-Shiloh road, provided easy accessibility.

After John Hodge Allcorn's death in 1853, Elizabeth Ann married R. J. Carothers and had other children. Elijah Hodge Allcorn married Emily Amanda Gentry (7 Jun 1838 - 3 Mar 1923) in Washington County, Texas on May 10, 1859. The Gentry family came to Washington County in 1835 from Williamson County, Tennessee. These families were the vanguard of the "Old Three Hundred" of Stephen F. Austin's Texas settlers. [6] Both Elijah H. and Emily Amanda Allcorn are buried in Liveoak Cemetery in Brady, Texas.

In 1889 the family cleared post oaks to build a home, later adding on to it with an existing home to accommodate their large family.

Another early settler was P. C. Casey, born near Holly Springs in Benton County, Mississippi, on May 25, 1853. He left there in 1878 in an ox-drawn wagon, settled first at Tyler, Texas, where he remained for two years. In 1882 he moved to the Williamson/Milam County line, where he lived 46 years until his death in Gano on 14 January 1928. A member of the Odd Fellows, Casey was also a charter member and one of the organizers of Pleasant Retreat United Methodist Church, having donated 2-1/2 acres for the church and cemetery where he is buried. [10]

On 2 September 1891, he applied for the appointment of a Post Office to serve 75 residents at WILDERS GIN. The application was returned, stating the name should be only one word. A second application on 24 September 1891, for Wilton, was also returned because that name had already been assigned to another post office. A third application requesting the name GANO was accepted, and on 3 November 1891, James Campbell Watson became the first postmaster of the Gano community. Subsequent appointments were Charles S. Watson (1894), John R. Wilder (1895), David A. Watson (1896), Andrew A. Wilder (1900), and John R. Wilder (1905). The post office closed on April 30, 1907. [1]

Records show a rural school, Gentry, existed in the vicinity as early as 1878, predating the settlement of Gano. Later records indicate the name was changed from Gentry School to Gano School sometime during the 1890s. It retained that name until August 4, 1919, when Gano consolidated with Unity School in Milam County and became the Fair View [1]

School in Milam County. With the advent of improved roads and methods of transportation, the need for rural schools like Gano was dwindling.

Another native of Pike County, Arkansas arrived in Gano in the summer of 1893. Rev. C. S. Watson (10 Nov 1859-10 Jan 1954) had come to visit his brother, James Campbell Watson, and preach to the people of Gano and surrounding communities.

At the insistence of the community, Rev. Watson moved his family to Gano and continued his ministry at the Gano Christian Church for 20 years. [11] On December 18, 1894, for the sum of one dollar, John Rhett Wilder and his wife, Missouri Agnes, deeded land to the elders of the church [12] on which to build a church. It is said that Missouri Agnes Wilder, seeing the need for a church, persuaded her husband to donate the land. Bro. Wilder gave substantial aid, not only in money but also in labor, since a large part of the church construction was the work of his sons. [13]

The Gano Christian Church was located on the north side of the Rockdale-Elgin Road in what is now the center of FM 486 at the inter¬section of FM 441. It was a white frame building standing on posts. Inside were rows of oak pews with an aisle on either side. The ceiling was 2" wide center-mesh, painted white. At the front of the church were an altar, rostrum, and an organ. Kerosene wall lamps with reflectors provided the only lighting. The plain windows were covered outside with green shutters. Songs, sometimes led by Joe Wilder, were sung from square or shaped note songbooks. Paper fans were used to keep cool. A tabernacle constructed several years after the church was built a welcome relief during the hot summer meetings. However, due to its low-lying location, the tabernacle was sometimes flooded during rainy seasons. Rows of slated oakwood provided seating, but for comfort during revivals, the elder Wilders would bring their own chairs from their homestead.

James Campbell Watson built a general store which was also used as a post office. It was apparently completed by late 1890 or early 1891, since his first application for a post office was dated in September 1891. This post-office-store existed until April 30, 1907 [1] when the post office closed, and mail was again routed out of the Thorndale Post Office. The general store also closed shortly thereafter. [13]

After remaining stable for 30 years, the population of Gano had begun to decline by the 1920s. Following damage sustained to the church building during a rain and wind storm in 1916, [14] services had been suspended, and the church was not rebuilt. Lumber from it was given to another church, and the tabernacle was moved to yet another church. [13]

With the demise of the church, the consolidation of Gano School with Fair View, and the closing of the general store, all activity as a community unit ceased. The area today remains essentially rural; however, the main property of John Rhett Wilder has been divided into lots, and new residents are gradually moving in. Several homes and trailer homes are now located near the site of the old settlement.