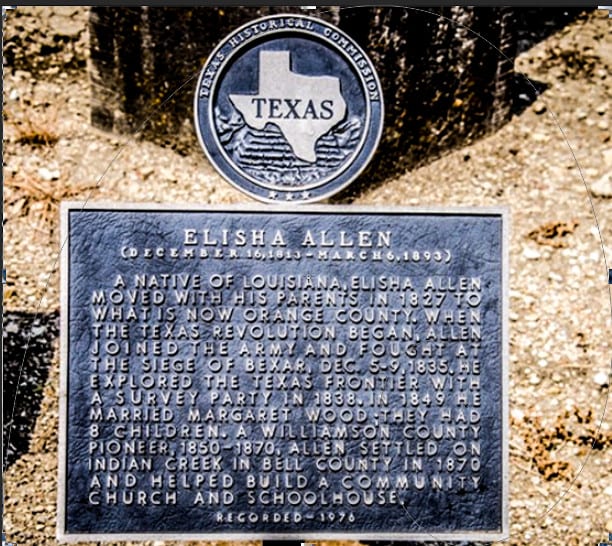 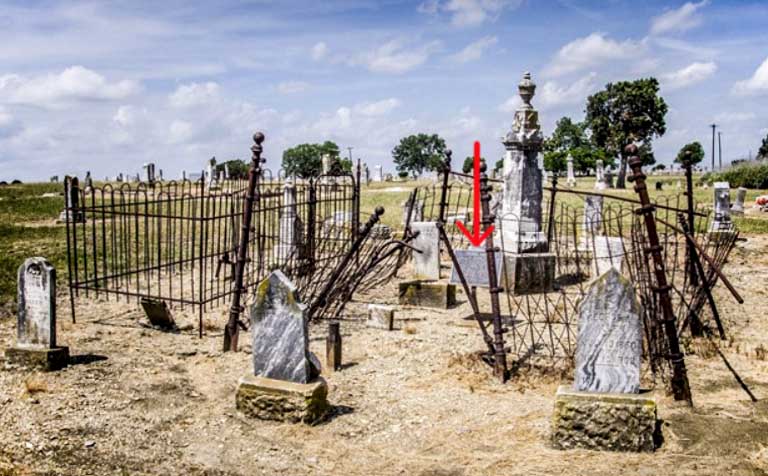 Located in the Bartlett City Cemetery Bartlett, Texas
Located on CR387 about 3/4 miles south of Bartlett on Hwy 95 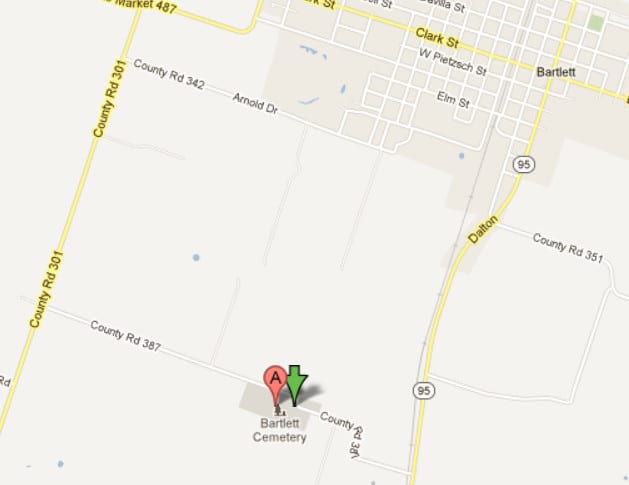 One of the oldest citizens of Bell county, although one of the oldest men in the county, is one of the leading farmers and stock-raisers. He has been identified with the best interests of Texas from Iris youth up, and it is eminently fitting that a biography of him should occupy a conspicuous place in the history of Bell County.

Mr. Allen was born in the St. Helena Parish, Louisiana.

Son of William and Hannah (Pride) Allen, natives of North Carolina and Tennes­see, respectively. His parents were married in Tennessee, went to Natchez, Mississippi, at an early day, and remained there for two or three years, after which they removed to St. Helena Parish, Louisiana. They were living within the sound of the guns when Jackson 'fought the battle of New Orleans in 1814. They subsequently moved from there to the western part of that State, and in 1827 came to Texas. Here Mr. Allen is located on Cow Bayou, near Sabine bay, in what is now Orange County, where he resided until his death, about 1830. He was engaged in stock-raising and farming, irk a small way. By his first wife, whose maiden name was Hazel, Mr. Allen had the following named children: Nathaniel, born November 15, 1782; Peter, born May 24, 1785; Lydia, born February 10, 1788, became the wife of John Stephenson; William, born June 16, 1790; Mary, born June 14, 1892, married a Mr. Speillers; and John B., born November 9, 1795, By his second wife, mother of the subject of this article, the issue was as follows: Daniel, born June 13, 1797; Thomas, July 10, 1799; Sarah, wife of George A. Pattillo, March 29, 1801; Elizabeth, December 18, 1802, mar­ried Eli Chancy; Jemima, October 9, 1804, was the wife of Charles Morgan; Aaron, Octo­ber 9, 1806; Moses, December 14, 1808; George, May 1, 1811; Elisha, December 16, 1813; Benjamin, November 4, 1815; and Elijah, September 24, 1817. All except Thomas reared a family of children, and of this large number of brothers and sisters, Elisha is the only one now living. John and Daniel were in the war of 1812, and both participated in the battle of New Orleans.

His parents being poor, he received little education. However, being a close observer and possessing natural ability, he gained sufficient knowledge to enable him to transact business successfully, and from a poor boy, he worked his way up in the world.

At the commencement of the war of 1835, he volunteered his services to the State.

After the time battle of San Antonio, in which he partici­pated, he was discharged and returned home. His brother-in-law, George A. Pattillo, owned a mill in Orange county, the only mill avail­able in that part of the Republic, and this young Allen helped his brother-in-law to run; it is conducted in the interest of Texas.

Mr. Allen continued to call Orange County his borne till 1850, although much of the time he was traveling through other portions of the State and was frequently among the savage tribes.

In 1838 he was with a surveying party in a section of the country and was often with the Indians, although lie was never troubled by them. Time country was covered with cattle, horses, buffaloes, and deer, and Mr. Allen remembers when there were only three families living zit the month of the Brazos. He is a great admirer of that distinguished statesman, Sam Houston, with whom he was well acquainted. At the time, Santa Ana was captured, and while on his way to New Orleans, he and his escort of three men stopped at the home of Mr. Pattillo and stayed all night. Santa Ana is described by Mr. Allen as being a fine-looking man, but sonic historians have pictured him as the opposite.

In 1850 the subject of our sketch became one of the pioneer settlers of Williamson county where be engaged in farming and stock-raising, remaining there till 1870.

While he never had any trouble with the Indians, many of his neighbors did, and all the young men with whom he was acquainted in 1835 were after­ward killed by them.

From Williamson County, Mr. Allen moved in 1870 to his present farm on Indian creek in Bell county.

Here he settled on a tract of wild land, 633 acres, having at that time only about half a dozen neighbors within several miles. Between here and Belton, there were only two or three families. The Indians fre­quently made raids through the country, steal­ing stock and occasionally killing a man.

Mr. Allen was married in 1849 to Miss Margaret Wood, of Mississippi, daughter of William and Sallie (Frazier) Wood.

In his declining years, Mr. Allen is well situated to enjoy life.

Besides his home farm already referred to, and of which 200 acres are under cultivation, he owns 400 acres in Williamson County, eighty acres of this being culti­vated. He is a man held in high respect by all who know him. Politically he has been a lifelong Democrat. He was a committed member of the A. F. & A. M.

Such is a brief outline of the life of one of Bell county's venerable pioneers.