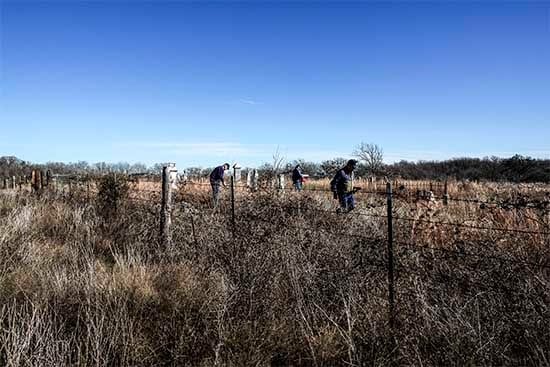 The Denson Cemetery is all that is left of the old Community.

The cemetery is behind a locked gate you must get permission to vist.

(The cemetery is located on land owned by Leonard Edward Stojanik, P.O. Box 683, Granger, Texas. Telephone 512-966-2711. He lives on his property. As the gate may be locked it is necessary to call before planning a visit. His brother Howard Stojanic lives near by.)

DENSON, TEXAS. Denson (also known as Densonville and Denison) was a scattered community on Willis Creek six miles northwest of Granger in northeastern Williamson County. The site was settled by members of the Denson family sometime before 1869. The community had, at different times, three different schools named Denson, a cotton gin, and a small store. In 1900 Denson's school served forty-eight pupils. By 1977 only the Denson family cemetery remained at the site.

clearing and cleaning the cemetery 2-1-13