Tennessee native Daniel Harrison (1816-1870) migrated to Texas in 1835. He served with Texan forces during the Texas Revolution, and as a volunteer for the Republic’s militia. He was in the 1839 Battle of the Neches. In 1840, Harrison married Nancy Robbins and soon moved his family to present-day Williamson County and what would be the Corn Hill community. He served in Central Texas’ 27th Brigade during the Civil War. As a blacksmith in Corn Hill, a stage stop on the route from Austin to Fort Gates, his work was crucial to traffic on the military road. Later, Harrison also farmed and raised horses and cattle. Originally buried in Anderson Cemetery, Daniel and Nancy were later reinterred in Corn Hill Cemetery. 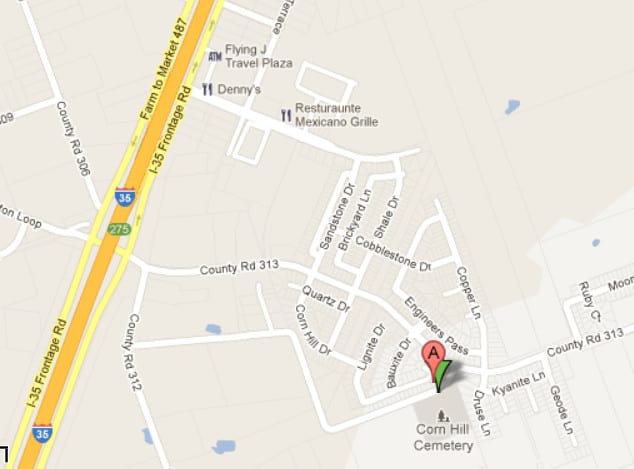 Daniel Harrison was a soldier, settler, and pioneer of Houston and Williamson counties in their formative early years. The contributions of this Tennessee native to east and central Texas in the 1830s through 1860s helped establish permanent settlements, agriculture, and transportation in his adopted home state of Texas.

Daniel Harrison was born July 19, 1816, in Davidson County, Tennessee, the second of seven children of Thomas and (Mary) Elizabeth (Daugherty) Harrison. [2] In December 1835, 19-year-old Daniel and his older brother, 21-year-old William Daugherty Harrison, both single, arrived in east Texas and settled in what is now Houston County. At that time it was a part of the Nacogdoches Municipality under the Mexican government. [3] Later, the Houston County board of land commissioners gave Daniel land grant certificate #121 to encourage permanent settlement. His grant was located four miles east of the town of Crockett.

Daniel served in the Texan forces in early 1836 during the Texas Revolution and was in the vicinity of the Battle of San Jacinto when independence was declared. [4] After the Harrison boys' father John died in Bedford County, Tennessee in 1838, their mother Elizabeth and the five younger children came to join William and Daniel in Houston County, Texas. A Republic of Texas record puts Daniel in Houston County in December 1838, when the Quartermaster Department paid him $14 for two cords of wood for barracks for the Texan forces. [5]

From July 1 through August 5, 1839, Daniel Harrison and his brothers-in-law James and Samuel Patton served in Captain Benjamin A. Van Sickle's mounted volunteers. This company was involved in the Battle of the Neches, an engagement with the Cherokees, on July 15-16, 1839. [6] In this encounter, termed the chief fight of the Cherokee War, Chief Bowl led the Cherokees against the Texan forces west of present-day Tyler, losing eighteen warriors while inflicting three casualties among the Texas militia on the first day. The following day, the Texans pursued the retreating Cherokees and killed more than one hundred, including Chief Bow1. [7]

Daniel and his family settled in northern Williamson County, about twelve miles north of Georgetown, at what would become the Corn Hill community in the 1850s. Daniel was the only blacksmith at Corn Hill, which was established as a stage stop on the route from Austin to Fort Gates (Coryell County). His job was crucial on this military road that brought supplies from the state capital to federal army posts to the northwest.

In the Civil War, 44-year-old Daniel was once more a soldier. He was a private in Captain John W. Mullins' 27th Brigade, organized March 1, 1861, in Williamson County.9 Estelle Mae Burns in her history of the Harrison family, relates some of the stories her mother Mary Jane (Harrison) Burns, Daniel's daughter, told her. She said when Daniel arrived home from the Civil War, he would not come in the house nor see any of the family until he could get rid of the body lice. He went to the creek near the house and removed his clothes and burned them. His wife Nancy gathered the comb, scissors, and coal oil and went to help him. She cut his hair very short to the scalp and put the coal oil on his head to kill the lice. When he did get to the house there was a great celebration, with much crying and laughing. [10]

According to his daughter, Daniel Harrison would not raise cotton. He would only grow corn or wheat to make bread for the family. He made a living by raising fine horses and blacksmithing. The country around Georgetown at this time was open range. The family always said Daniel was constantly riding after his horses and what cattle he owned. The horses were driven to east Texas and Louisiana to be sold. Daniel Harrison said, "I would not give the steel off the blade of my knife for all the land in east Texas." He just did not like the cotton patch. [11]

After returning from the Civil War he planned to sell his property in Williamson County and move further west to get away from the cotton country, but illness in the form of consumption from exposure in the war took his life on April 13, 1870. Daniel was buried in the Anderson Cemetery near Donahoe Creek. Many other of Daniel's descendants and relatives are buried in the Corn Hill Cemetery. In the 1970s, based on information that Donahoe Creek was to be dammed and the Anderson Cemetery land would be flooded, descendant Frederick Marion Harrison moved Daniel's and Nancy's remains to the Corn Hill Cemetery. In the end, Donahoe Creek was not dammed, and other relatives remain buried at Anderson Cemetery.

Daniel's son Ben and grandson Fred continued as blacksmiths in Corn Hill in the middle and late nineteenth century. Fred also operated the cotton gin in Corn Hill until the town was bypassed by the railroad and most businesses moved to Jarrell in 1909-12. Today, Daniel Harrison has several descendants and relatives still living in Williamson and Bell counties. His descendants have acquired pioneer certificates from the Texas State Genealogical Society and the Williamson County Genealogical Society. The Williamson County Historical Museum in Georgetown has a copy of a tintype image of Daniel Harrison. [12]

Daniel Harrison was one of the early permanent settlers in northern Williamson County. He was a blacksmith in Corn Hill, a stop on the stage route from Austin to Fort Gates in the 1850s. He also was an early farmer and rancher, growing corn, raising cattle and horses, and contributing to the local economy. Harrison was a soldier in the Texan Revolution, the Republic of Texas militia, and in the Confederacy during the Civil War. His descendants still populate Williamson and Bell counties, farming much of the same land that he first farmed more than 160 years ago.