The Clark Mansion, 2112 West Lake Drive Construction on the Clark mansion was begun in 1876 and completed almost two years later by Crawford H. booth, a Union officer in the Civil War. "Cap" booth was a founder of the Taylor national bank and the 5t. James Episcopal Church and the donor of 30 acres for the Taylor Fair Association where a popular race track drew horse and buggy racers from all over the country. The booth's daughter Bessie and her husband Lycurgus Nelson continued the tradition of horse racing and training. John and Eunice Clark purchased the home in 1958 where they raised their family and were noted for their entertaining. Daughter Sherry Clark Nichols now owns the home which is available for special events. With its distinctive dome, the Clark Mansion is a landmark in Taylor and features Louisiana longleaf pine and black ebony in its staircase, woodwork, and parquet floors. Stained and beveled glass highlight the windows.

This house was built about 1880 for Crawford Henry Booth (1843-1937), a prominent local rancher and banker. An unusual local example of the L-plan vernacular form, the house features many Queen Anne details, including an octagonal turret with onion dome roof, polygonal bays, arched windows, curvilinear porch with spindlework balustrade, keyhole windows, and decorative shingle work. The house remained in the Booth family until 1958. Recorded Texas Historic Landmark - 1992 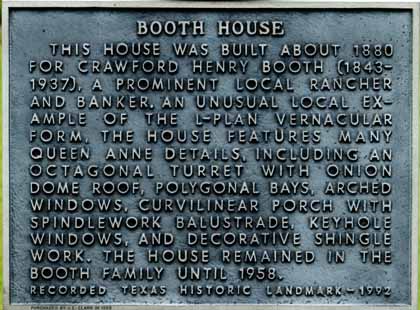 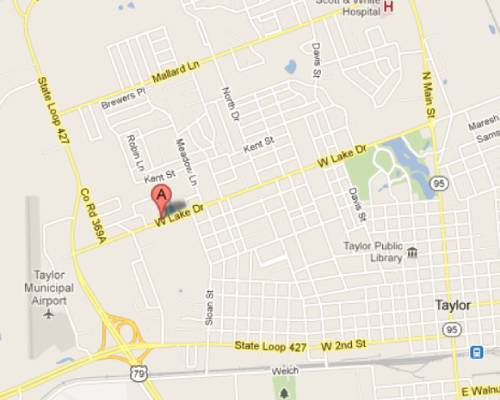 The Booth Homestead occupies several acres on the northwestern, suburban edge of Taylor. Dominating the homestead is a large, picturesque Queen Anne Victorian house owned and inhabited for almost eight decades by two generations of one family.

Several elements exist on the homestead, some historic, some modern: in addition to the house are a small historic barn, two spring-fed ponds, a modern garage attached to the rear of the house, a 1,600-gal. the cistern, a winding gravel drive approaching the house, and 5.72 acres of the original 201.71 acres. On the southern edge of the parcel, old barbed wire fencing separates the lot from the city street (originally the Taylor-Georgetown County Road, later Lovers Lane, now Lake Drive). More old barbed wire parallels the winding drive east of the house and protects the house and barn from pasture on the east. A second fenced pasture exists southwest of the house.

By 1879, just three years after Taylor was founded, Crawford Henry Booth (1843-1937) had moved to Taylor from Wheeling, West Virginia. A Civil War veteran for the Union cause. Booth was married with three children.

For 13 years prior to his move, he had been in the carpets and furniture business with a brother-in-law in Wheeling. Booth followed a second brother-in-law Curran Mendel to Taylor where the two partners entered the cattle and sheep ranching business.

Taylor was founded in 1876 as a station stop for the International and Great Northern Railway.

Named for Edward M. Taylor, an official with the Houston Belt and Terminal Railroad (Webb, II, 1952:717), the town was platted in 1876 under the direction of M. L. Linch who for years was a civil engineer with the I & GN Rwy. Taylor quickly became a shipping point for area livestock. Early newspapers (Taylor Weekly Texan, November 29, 1893:1) retrospectively describe the early town as a village surrounded by pasture devoted to large herds of longhorn cattle and sheep.

If the livestock industry was first to capitalize on Taylor's railroad, other developments occurring Quickly and concurrently facilitated growth. The cultivation of cotton. for example, the breakup of open range into smaller, agricultural holdings, and the development of commerce and municipal expansion all followed closely so that by 1893 -- 17 years after its founding -- Taylor was a small but prospering community offering a variety of economic incentives.

Cotton, for example, was introduced into eastern Williamson County in the 1850s; by 1877.

The crop was under cultivation in the Taylor area, as suggested by the presence of Taylor's first cotton gin by that date (Webb II, 1952:717). With the 1881 extension of the Missouri Kansas and Texas Rwy. through Taylor, the town's identity as a railroad focus grew. The presence of railroad employees for yard force. repair shops, machine shops. roundhouse, telegraph, freight, and passenger services further enhanced Taylor's population and status in southeastern Williamson County. By the mid-1880s, Georgetown newspapers cite cotton, corn, pecans, corn-fed beeves. sheep. and hides as area exports, with Chicago given as a market for Taylor's corn, fed cattle (Williamson County Sun, May 17. 1886:3). Area agriculture is supported by the Farmers' Alliance, activates of which are reported in Georgetown newspapers of the mid-1880s (Williamson County Sun 8/26 and 10/21, 1886). By the early 1890s, a Taylor newspaper cites cotton as the town's leading export but asserts that corn, oats, sorghum, hay, millet, and wheat are also profitable crops (The Taylor Weekly Texan, 11/29/1893:1). Thus by 1893, the railroad, population growth. and commerce together had transformed the pioneer village into a prospering town with attendant urban amenities. Throughout this developmental era and beyond, C. H. Booth pursued his interests in raising and selling livestock while simultaneously promoting his adopted home.

In May 1879 Booth paid brother-in-law Curran Mendel $5.000 for 201.71 acres from the W. J. Baker Survey of Williamson County. The sale was profitable for Mendel. Only two years earlier, he had paid the same amount for a thousand acres from which the 200-acre Booth parcel was subdivided.

Booth and Mendel are said to have entered the sheep and cattle business on a large scale.

Tradition holds that together they fenced thousands of acres of the range near Taylor with barbed wire, a commodity first available in Texas in 1879 (Webb 1952:11:110) and shipped to them from Pittsburgh. Tradition further credits them with the earliest use of the new commodity in the Taylor area. Booth's ad valorem tax records from the late 19th and early 20th centuries indeed show marked fluctuation in sheep holdings as well as smaller holdings in horse, cattle, and hogs (Roll 650: 1878-1905 inclusive). A 1948 newspaper article reports that Booth concentrated on breeding fine cattle, particularly Jerseys and Herefords (Taylor Daily Press, Section VI 4/27/1948).

Booth also threw his energies into community development. His obituary of 1937 in fact mentions a lifelong interest in the development of his adopted community. .In 1888, with Joseph Speidell and Curran Mendel, Booth organized the Taylor National Bank. He served as vice president for years; in 1909 he became president (Taylor Daily Press Section VI 4/27/1948; Taylor Conservation & Heritage Society Community Preservation Award application; A. Booth et al, "Mr. and Mrs. Crawford H. Booth. Sr."; American Statesman 1899:nd). Booth also was a founder of the St. James Episcopal Church in Taylor. In 1897 with others. he deeded 30 acres near his homestead to the Taylor Fair Association, thus providing a permanent home for the organization (Warranty Deed 153/387).

Booth's interest in livestock no doubt influenced his membership in the Williamson County Live Stock (sic) and Sale Association, organized about 1881.

Although sheep and sheep shearing were the original focus of annual meetings among area sheepmen, the focus of these gatherings expanded during the 1880s to include fine horses, hogs, and poultry. With the fairground's 1890 move from its south-side original site to one north of town next to Booth's homestead and the installation of a half-mile race track, thoroughbred horse racing assumed greater importance. Increasingly owners of thoroughbred trotters and pacers from within the state and outside sent competitors for the sizeable purses. Booth's professional and personal interests in thoroughbred horses and cattle probably not only later induced him to deed acreage to the fair association but explain his 1893 presidency of the association (The Taylor Weekly Texan, November 26, 1893:4).

In 1930, Booth sold the homestead (by then reduced to 50 acres) to his surviving daughter Bess, wife of Lycurgus Nelson (Warranty Deed 257/451).

The Nelsons were well-liked and respected in the community, in particular for their interest in racehorses (Taylor Daily Press 4/271 1948. Sec. V1). Lycurgus Nelson trained fine harness racer's at a track west of the home and raced them throughout the Midwest.

The Booth House is a large two-story frame house built in the Queen Anne Victorian Style popular in Texas and elsewhere during the 1880s and 1890s. Its plan is a modified L. Its complex roof and one-story front porch on the main (east) elevation lend considerable interest to the composition. Corbelled chimneys, for example. plus one 'onion' and two hexagonal turrets mark the roofscape of the front section of the dwelling while the rambling front porch is covered with conical. gabled, and shed roof forms. The back (westward) extension of the house is covered by a gable roof with 'kicked' eaves. - Round-arched windows occur on the south and east (the public) elevations, second level, while a keyhole window and numerous stained glass windows further ornament the primary elevation. A hallmark of the Queen Anne idiom, imbricated shingles on the walls of all three turrets creates the desired textural effect.

The Booth House is one of the largest and most architecturally impressive dwellings from any era in Taylor today.

It is particularly interesting within Taylor because of its early date. Its existence at such date may be explained by two phenomena: the increasing fashion consciousness of middle-class America due in part to the accessibility of architectural pattern books, and the financial status and social aspirations of its original owners.

Incomplete documentation is known so far about the construction of the house. Local tradition assigns it a date of 1879 and holds that C. H. Booth built it for his family, who is known to have arrived in Taylor in 1879. Booth's tax records suggest the possibility of improvements occurring at his 200-acre parcel during the early 1880s (Roll 650: 1878-1885). An 1899 newspaper photograph (see attached) demonstrates that by that date, the house was in place, largely in its current configuration.

Although an architect or builder may yet be associated with the house, the availability of architectural pattern books also may account for its existence. By the mid-1880s, several pattern books, including those of A. J. Bicknell, William T. Comstock, and George Palliser were in common circulation at a reasonable cost through New York and Connecticut publishers. Lumberyards with building services also often made them available to customers. Promoting direct contact between prospective homeowners and architects, pattern books were influential in the dissemination of 'architecturally designed' housing at an affordable cost to an increasingly wealthy. fashion-conscious middle-class America.

Lacking contemporaneous documentation for an 1879 date for the house, the following is proposed as an explanation for its existence by circa 1879/1885.

Booth himself and his in-laws were people of means. Booth, for example, left a carpets and furniture venture in Wheeling when he emigrated to Texas while retaining unspecified 'business interests' in West Virginia even after his move. Cecilia Booth, on the other hand, inherited wealth from her mother, a portion of which paid for the construction of the house (Warranty Deed 108/101). As people of means living in Wheeling, West Virginia in the 1860s and 1870s, it is conceivable that Booth and his wife were at least aware of, and perhaps appreciated, architectural styles of the period present in their hometown. readily available through pattern books, or, after their arrival in Taylor, through the Thompson Lumberyard (in the 1880s the Thompson & Tucker Lumberyard), in operation by 1877 (Taylor Press 6/9/1926:np).

Reconciliation of the traditional 1879 date for the house and the implications of Booth's tax records may be achieved-via the common practice of house enlargement. It is possible that a smaller house (perhaps the westward, gable-roofed extension) was built for the family by 1879, and that enlargement occurred during the early 1880s. Enlargement would explain both the sequence of increasing evaluations present in Booth's early and mid 1880s ad valorem tax records as well as the unusual configuration of the existing house, ie., a front rambling, turreted section juxtaposed to the back rectangular gable-roofed section (a configuration pointed out to the writer by architectural historian Bruce Jensen). Until further data emerge, a date of ca. 1879/1885 is proposed for construction of the house.*

*It should be pointed out that oral tradition also states that the large ('onion') dome was shipped by sea from Washington state around the southern tip of South America to Galveston and hauled by wagon to Taylor.