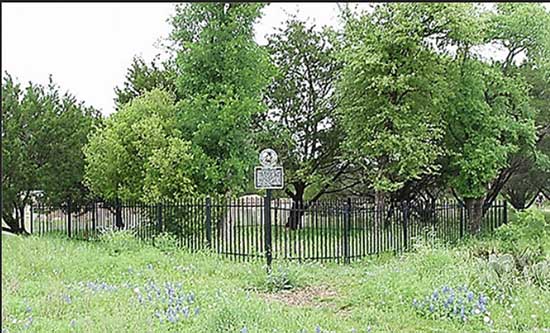 From Parmer Lane, take Brushy Creek Road east to Champion Park on the right. Turn into the park and turn left, go to the end of the parking lot, and park. Look south across the field, and you will see a concrete pillar and a little further to the right, a flag pole, and a bridge. The cemetery is just to the right of the concrete pillar. Walk across the field, and you will see the cemetery enclosed by an iron fence a short way from the hike and bike trail of this park.

John (Jack) Champion (1817-1908) was a native of York County, South Carolina. He moved to Texas by 1850, the year he and Naomi Jane Standefer (1834-1862) were issued a marriage license in Williamson County. In 1854, Champion bought more than 200 acres at the headwaters of Brushy Creek. He later served in the Civil War and, briefly, as County Sheriff. The grave of Naomi, the mother of seven of Champion's nineteen children, is the oldest of the four marked graves in the pioneer family's cemetery. Surveys indicate the presence of at least five unmarked graves. Historic Texas Cemetery - 2002. 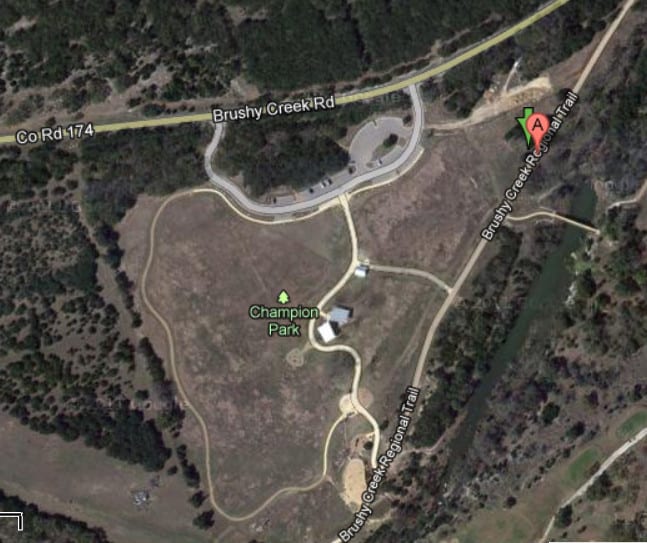 The Champion Cemetery is located near Brushy Creek, south of County Road 174, approximately four miles east of Cedar Park, and is named for John (Jack) Champion, a pioneer settler and early sheriff of Williamson County who is buried there along with other members of his family. The approximate location of the cemetery is indicated on Cemetery Maps published by the Williamson County Historical Commission in 1986 and 1999.

A list of graves reported as a result of a 1974-75 survey by the Williamson County Historical Commission (Faubion:1976:33) indicated four named markers and five unmarked interments.

(Appendix A) Around 1986 it was reported that fence posts were located at the northwestern and southeastern corners of the site, and upright monuments were present. Vegetation included scrub oak, juniper, and native grasses (Voellinger et a1.1986;5-34 to 5-38). A historian who surveyed the cemetery again in July 2002 observed no remaining evidence of fence posts or fencing materials. Photographs taken in 1986 illustrate the markers as upright rectangular stones. The 2002 survey indicates they were embedded in a cement base and lying flat on the ground. Vegetation included juniper, hackberry, persimmon, and native grasses.

The original size of the cemetery is unknown.

An area approximately 30 x 30 meters was recently fenced to enclose all discernible gravesites. Appendix B, the most recent survey completed (Slocombe:2003), indicates four named and six unnamed graves. It is probable there could be additional unmarked graves.

John and Naomi Champion are listed on the 1850 census of Williamson County in the Pond Springs area, home of her parents, where they probably lived until 1854.

It was that year that John C. Champion purchased from Sarah Dillard Mayfield, a resident of Ellis County, 234 acres of land out of the John H. Dillard survey for the sum of $174.25. (Williamson County Deed Records, 5:398). The property is described as being on the headwaters of Brushy Creek. In 1870 he purchased an adjacent parcel of 70 acres from James G. Harrell, described as beginning at the southeast corner of the Champion homestead tract, thence northwest to the foot of the bluff (Williamson County Deed Records 12:59). On 1 May 1895, Mary E. and John Champion sold 244 acres to Euell Cluck for $1,000. (Williamson County Deed Records, 74:283). It appears likely that the cemetery is located on the old Champion homestead, which was included in the property sold in 1895.

The earliest recorded burial in the Champion Cemetery is that of Naomi Jane Standefer Champion.

During the Civil War, John Chapman served as a private under Gen. E.S.C. Robertson in the 27th Brigade of Williamson County.

In 1869, John Champion served one year as County Sheriff, filling out the unexpired term of Leroy B. Lord. He did not, however, choose to run for reelection. (Noble 1985:83)

John Champion died on 12 December 1908 at the age of 92, in the Leander home of his daughter and son-in-law, Minnie and Lee Noble.

2003 Survey of the Champion Cemetery