Founded in 1901, after the death of an infant grandson, the Clucks set aside over 7 acres of land to be used as a family cemetery. Many Cluck family members are buried there, along with neighbors and friends. Later, the cemetery was divided by 183, resulting in a half-acre lying east of the highway (now occupied by the Sonic). The cemetery on the opposite side holds the Clucks and other founding family members, including McRae, Jackson, and Stewart. Located at West Park St. and Bell Blvd., the back portion of the cemetery features George and Harriet Cluck's headstones and other Cluck relatives.

Marker Text:
​George W. and Harriett Cluck settled in this area with their family in the early 1870s, soon after they returned from a cattle drive on the Chisholm Trail. They built a log home and trail. They built a log home and were instrumental in the community's development. In 1901, upon the death of their infant grandson, Emmett A. Cluck, the couple set aside land on their farm for a family graveyard became a community cemetery and was formally deeded as such in 1912. George and Harriett Cluck are buried here, along with many family members and neighbors. (1989) 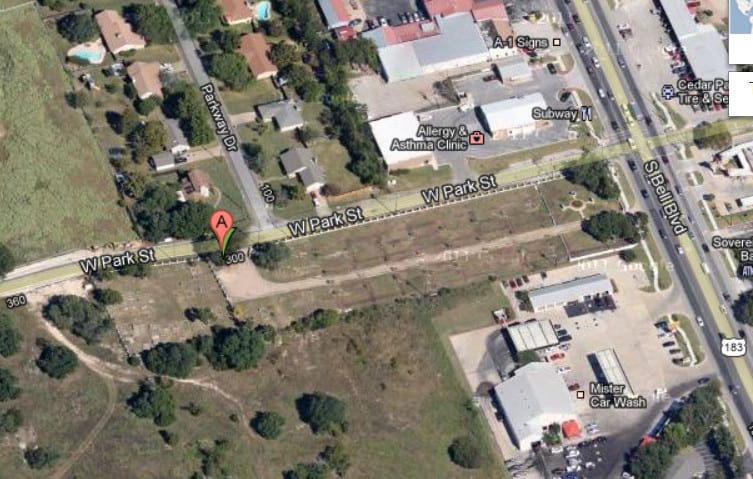 In the 19th and early 20th centuries, it was common for a family cemetery to be started when a family member died. Rural Texans had no choice but to bury the deceased on family land. This was the case with the Cedar Park, Cemetery.

In January 1901, their grandson, Emmett A. Cluck, age four months died. He was buried on the Cluck property, and this was the first burial in that would become the Cedar Park Cemetery.

(1) Harriett, also called Hattie, was born in Cherokee County, [1] Alabama in 1846 to Mr: and Mrs. James Standefer. The Standefer's had heard the wonderful stories of the possibilities of Texas, and in 1847 brought their one-year-old daughter with them to live in Live Oak Prairie [Pond Springs] Texas. Her grandfather, Israel Standefer II was a member of the convention that wrote the constitution of the State of Texas and helped frame the ordi­nances of annexation for Texas to the United States in 1845.

Her parents had very little in those days.

Corn was ground by shelling it on a large flat rock and driving the family horse over it until he tramped it into powder. One spoon and a skillet comprised their kitchenware, but, regardless of these inconveniences, young Harriet grew into a fine young woman. Her eyes danced when she was telling where she first saw the man she would marry. "All the young folks for miles around had come to that dance. There was George Cluck in the midst of all the fun and mischief. He and the other boys formed a circle around an old cow thief that someone had brought in, they danced and pointed at him and sang songs about what ought to be done with a cow thief. When I saw how full of fun and how nice he acted about everything I could not take my eyes off of him," said Harriett. [2]

Soon after that dance at the age of 17 young Harriett became the bride of George Cluck.

Two babies blessed this union and they lived happily, Mrs. Cluck keeping house and tending to her children while Mr. Cluck looked after his stock and began getting ready to take them to market. [3] He had a fine herd of Longhorns and he had heard about a certain Chisholm Trail that had been blazed toward Abilene, Kansas. Rumor had it that Longhorns brought ten and twelve dollars on foot; and before the Trail had been blazed, steers couldn't even be given away. The hides could be sold for several dollars, but they had to be carried to Indianola on the gulf coast. George decided to take his longhorns to Abilene, Kansas. [4]

When asked about being the first white woman to go on the Chisholm Trail, Mrs. Cluck said: "There was nothing else to do with me and the babies but to take us with him. He took all he had in the world with him, and we wanted to be together no matter what happened." [5]

There were 16 adults in the party, Mr. and Mrs. Cluck and the trail drivers and two big herds of cattle.

Driving was slow and she and the children rode in a hack. When they came to the Red River, Mrs. Cluck said she could imagine the swift current sweeping away the wagon, carrying herself and babies, so she got astride of the horseback of Mr. Cluck. He held the babies at arm's length clear of the water, while the cowboys drove the wagon carefully, their good horse swam across to safety with the Cluck family. She said the reason so many parties had trouble with the Indians was because they did not pay them for the right to cross the Indian lands. Her party shared their provisions with them, giving them a whole beef for the privilege of traveling over their possessions and thus remained on peaceful terms. [6]

Once, on the trip, they received quite a scare.

Looking ahead, they saw a great cloud of dust and they immediately thought of unfriendly Indians. On the closer range, it proved to be bandits. The leader was a sullen sort of man. He came up to the Cluck party who had grouped around the chuck wagon. He started his business and told them that if they offered any resistance, he had sixteen of the best men in the country to fight them. Mr. Cluck replied, "There you are wrong. The best men in the country are right here in my outfit and if you don't believe it, we will show you." Several of the younger boys went to the rear - for fresh horses they claimed. But Mrs. Cluck, thinking they were deserting, said, "If any of you are afraid to fight, stay here and tend to my babies, and I'll take your guns and fight for you." With that taunt, they all made ready to oppose any attack of the bandits. When the bandits' captain saw they meant business and could match them in strength and numbers, he called his men together and ordered them to ride off. [7]

"They traveled for months on that Chisholm Trail before they finally arrived at Abilene. Never did a place look so good to travelers. They sold their herds to an advantage, and being so tired from their tedious trip, they decided to winter in Abilene. Mr. Cluck bought two more herds of cattle and sold them for a profit, so, by spring, he had a nice purse of money and was ready to bring his family back to Texas to live comfortably." [8]

"The return trip did not seem long. Mr. Cluck brought his family three miles past Live Oak Prairie, their former home, to an unending spring where Running Brushy heads, near Austin. [present day Cedar Park]. He built a log cabin and with the assistance of his good wife, helped to prepare the way for civilization. In 1875, to accommodate the people who settled at Running Brushy, Mrs. Cluck accepted the position of postmistress at Running Brushy 1875. She held this position for a number of years. This was without a salary, just a percentage of stamp cancellations. The old stagecoach, running from Austin to Lampasas, came by and she attended to the duties of her office for an average of $3.00 to $4.00 a month. The little slot for letters is still to be seen in the front wall of the Cluck home.[in 1932]. When the railroad came through, the name of Running Brushy was changed to Cedar Park. * More acreage has been added to the Cluck homestead until now it includes more than 1,000 acres." [9]

(* the name was actually changed from Running Brushy to Brueggerhoff, but that name was too hard to spell and pronounce, so it was changed to Cedar Park.)

"Mrs. Cluck likes to tell of her attendance at the reception and dance for Governor Sam Houston and to describe the quaint tables of food; or to describe Indian warfare. At her 84th birthday, she recited poetry and the plot for a play she had just written. She was a midwife, studied law, and at one time, she and her husband plead their own case before the bar; she collected butterflies and some of the cases of her butterfly collection are now at the University of California. She was recognized as an artist and has an interesting collection of arrowheads." [11]

"A stone quarry is on the Cluck land. Stone from this quarry is being used in the Centennial buildings over the State, and it is used for trimming the new Waco Post Office; in the hallways of the home of Malcolm Reed at Austin; the old University Library; the Austin post office, and as trimming for the Herman Hospital in Houston; the largest, longest, single piece of stone to be cut out of a quarry all in one piece, was taken from this quarry and used to make the large columns in Governor Sterling's home near Houston. In the quarry is found Italian travertine stone; this is the only place in the United States where it is found. An Indian mound, rich in relics and reputed to be the largest in the State, is less than 200 yards from the home place." [12]

As previously stated, the first burial was four-month-old Emmett Cluck. Another grandchild was the second burial. Selma Friedsam, born on October 24, 1903; died May 2, 1904. She was the infant daughter of S. A. and Julia Frisam. Julia was the daughter of George W. and Harriett Cluck.

About 120 people are buried in the Cedar Park Cemetery.

A few of those where Cluck family members, who were buried there before George and Harriet Cluck deeded the property for a community cemetery.

Even though the Cedar Park Cemetery was begun in 1901, it was not until 1912 that the property was officially deeded. On December 24, 1912, George W. Cluck and his wife, Hattie L. Cluck deeded the property to Emmett Cluck, Alvin Cluck, and Clarence Cluck [all sons] who were the Board of Trustees of the Cedar Park Cemetery... "to prepare and preserve a suitable burying place for the dead of our community have this day given, granted, sold and conveyed, and delivered, and by these presents do give, grant, sell, convey and deliver to Emmett Cluck, Alvin Cluck and Clarence Cluck in trust for the purposes hereinbefore stated and their successors in office the following described tract, piece, and parcel of land." [sale for $10.00].

The deed was not recorded until June 25, 1913, and at the same time a Contract to Emmett and C. A. Cluck giving them the rights to the quarry and stone on the property.

In October of 1972 Myreta Matthews copied the names and birth and death dates of those buried in the Cedar Park Cemetery.

The total burials at that time were 92, and today it is almost 120. This inventory is attached. The Cedar Park Cemetery Board of Trustees are still in charge of the cemetery. Today the cemetery is about three (3) acres under fence.

The proposed site of the historical marker is just inside the gates of the Cedar Park Cemetery as shown in this photograph. The largest tombstone in the photo (center left) is that of George and Harriett Cluck, and it even has their photographs affixed to the stone.