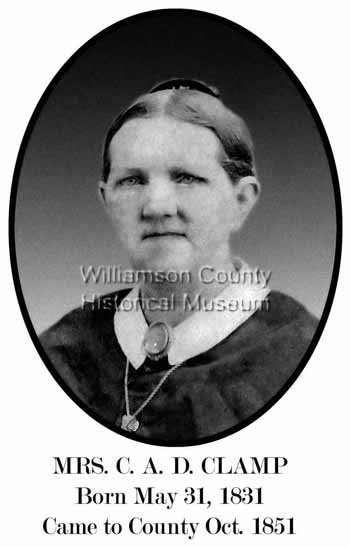 Christian Augustus Daniel Clamp was born in Thorn, Prussia (now Torun, Poland). He came to Texas in 1846 and moved to Georgetown in 1851, a year after his marriage to Asenath C. Davis (d. 1917). A skilled carpenter and cabinetmaker, Clamp became one of the city’s earliest builders and developers. His work included residences as well as commercial, religious, and governmental buildings. He also owned a furniture business in this block for many years. An active Presbyterian and civic leader, Clamp served as mayor of the city from 1878 to 1880. He is buried in the I.O.O.F. Cemetery.

In every community that has survived long enough to be considered "historic", there has been a core group of individuals who were most instrumental in its early growth and development. Without consideration for their roles as pioneers or founders, they worked collectively to assure security, economic stability, and an enhanced quality of life. Their leadership was vital to progress and sustained the town through those pivotal phases of development experienced by all communities. In Georgetown, the key community leaders included such individuals as Moses Steele, Jesse Daniel Ames, George Glasscock, Capt. J. C. S. Morrow, the Snyder brothers, and C. A. D. Clamp.

Clamp, whose family name in Prussia was von Klemp (also shown as von Klamp), spent many of his early years hunting wolves for bounty. He also, evidently, apprenticed as a cabinet maker, a trade that would become his livelihood upon reaching the United States of America. [1]

C. A. D. Clamp came to America in 1846, entering Texas at the port of Galveston aboard the ship "Emily."

For a short time after his emigration, he worked in the vicinity of Houston, building furniture and houses. In nearby Austin County, he met and married Asenath Christina Davis (1831-1917), a native of Georgia and the daughter of a Baptist minister. Shortly after their wedding in 1850, the couple moved to the new community of Georgetown, arriving in 1851. [2] Platted only three years before, Georgetown was still a struggling frontier settlement.

An 1893 biographical history of the area noted:

Where Georgetown now stands was almost a wilderness, and many times Mr. Clamp stood in his house door and heard wild turkeys fly up to roost, and before breakfast next morning would have enough turkey to supply the town for the day. Deer, bear, and panther were easily found and the whoop of the Indian was heard in the cedar brake above the town. . .[3]

Clamp established a carpentry business in the new settlement.

At the time, his actions must have seemed overly-ambitious--there were only a dozen houses and a few stores in Georgetown. But, as the community grew, Clamp became a leading builder and craftsman. Building projects with which he was associated included the 1854 Williamson County Courthouse (since razed), the 1870s First Presbyterian Church, the McMurray House (611 Church St.), and several commercial structures on the courthouse square. Clamp built the original two-room stone portion of the McMurray House in 1868 for his son-in-law, the Rev. John McMurray. The home was unusual for Georgetown in that it included a double fireplace and a full-size cellar. The Rev. McMurray was pastor of the First Presbyterian Church, for which Clamp built a limestone sanctuary in the modified Gothic design a few years later. Located on adjacent corners of an intersection in the central, historic, section of the city, the two structures still stand as reminders of Clamp's contributions as a builder. [4]

The Clamp Addition, platted first in the 1870s, is located in the northeast part of the city near Southwestern University. Institutions, as well as residents, also benefitted from his landholdings. He deeded property (16 lots) to Texas University, the precursor of Southwestern University, and to Presbyterian congregations in Georgetown and Round Rock (The Georgetown church was organized in Round Rock, but moved several years later). [5]

In addition to his success as a builder and developer, Clamp operated several retail establishments.

In 1863 he became a partner in a mercantile operation known as Anderson, Clamp, and Co. Two years later, he opened his own store. Because of his skills as a craftsman, he began adding furniture to his inventory and, by 1879, was concentrating primarily on the construction of such pieces like doors, spinning wheels, caskets, looms, blinds, and household furniture. Clamp's descendants still have pieces attributed to him. [6]

C. A. D. Clamp was an active civic leader and his many contributions added greatly to the early development of the community.

His devotion to Georgetown was an important part of his life. Although a staunch Republican and, prior to the Civil War, a Union loyalist, he vowed to follow the majority will of the Texas people on the issue of secession. Accepting the eventual outcome, he participated in the Confederate home guard for the Williamson County area. After the war and the resulting Reconstruction, he served as mayor of Georgetown (1,878-80) at a time when the city needed a new direction to realize its economic potential. As noted earlier, Clamp also conveyed land for the development of local institutions. [7]

It was through the church that Clamp made other lasting contributions to the quality of life in Georgetown.

By the time Clamp arrived in Georgetown, Presbyterians throughout the United States were experiencing the beginnings of a schism that would be further exacerbated by the Civil War. With the sectional dispute came a rending of the Presbyterian structure, with parishioners divided primarily into Northern and Southern camps. Clamp, as already mentioned, remained loyal to the Union and, therefore, to the idea that the various factions of the denomination could again be united.

The Presbyterian churches in Texas voted, during the Civil War years, to organize a separate ecclesiastical structure known as the General Assembly of the Presbyterian Church, Confederate States of America. Following the war, efforts to reinstate the Texas churches into the Presbyterian Church, U. S. A., proved futile, and almost all congregations voted to retain their Southern affiliation. The result, in Georgetown, was a division among Presbyterians. Clamp cast his lot with those rejoining the original, or Northern, the church.[8]

The Rev. John McMurray was called to Georgetown to head the pro-reunification congregation. Clamp's daughter, Elizabeth, wrote her impression of the new minister in her diary in 1867:

Pa got a letter from Mr. McMurray the other day stating the acceptance of principal of the Georgetown Male and Female Academy and also as the Presbyterian minister for this place, but what is worse for me Pa is going to board him. I dread that--not that I am sorry we will have borders for I want Pa to have them so I can help to pay for my schooling. Mr. McMurray is a young man with such large piercing grey eyes

I know he will be very strict. How can I put my mind to studying philosophy and such anymore? [9]

The piercing grey eyes evidently took their toll on Lizzie; she and the Rev. McMurray were married within the year.

The differences among the Georgetown Presbyterian leaders, although appearing divisive on the surface, were never really severe. Clamp, for example, was frequently invited to attend the Southern congregation's Session meetings, even though he remained a trustee and elder of the Northern group. Eventually, the bitter feelings brought about by the Civil War abated, and the two congregations merged in the 1890s into the church that exists today. [10]

C. A. D. Clamp was the patriarch of a family of eleven children, many of whom eventually moved to other areas of the state.

In 1913, when he and Asenath were quite elderly and no longer able to care for themselves physically, the couple moved to San Antonio to be nearer several of their children. There, on June 12, 1915, C. A. D. Clamp died at the home of his daughter, Agnes Elterman. He was 88 years old. [11]

Georgetown residents responded in great numbers at the news of Clamp's death. On the day following, when his body was returned to Georgetown by train for burial, a large crowd of friends, family, and acquaintances met the funeral party at the depot. The casket was removed and taken directly to the I. 0. O. F. Cemetery, where the local Presbyterian minister performed the ceremony.

The Georgetown newspaper covered the funeral under a heading that included the phrase: "A Noble Life Closed."

The reporter observed that the ceremony ended with citizens passing by the open grave and dropping handfuls of dirt in a quiet tribute to the honored Georgetown pioneer.

But that body in the graveyard is not all that is left of C. A. D. Clamp in Georgetown. His memory is like an ointment poured forth. His deeds live after him. He helped to mold and shape this community. His influence abides and will abide. . . . At the time of his death, Mr. Clamp was 88 years, three months, and eleven days old. Ripe in years, mature in Christian faith, he has been gathered like a ripe sheaf into to (sic) the master's garner. [12]

In a fitting tribute to Christian Augustus Daniel Clamp, family members have joined with the Georgetown Heritage Society in an effort to secure an Official Texas Historical Marker recording his life history. The site chosen for the marker is the 700 block of Main Street, a section of the historic Georgetown Square closely associated with Clamp. At various times he either owned the property or office in the buildings constructed there. [13] A marker to Clamp would enhance the historic preservation efforts in Georgetown while serving as an important reminder of an individual considered to be a "builder of Georgetown" in many significant respects.