1113 Ledbetter in Round Rock 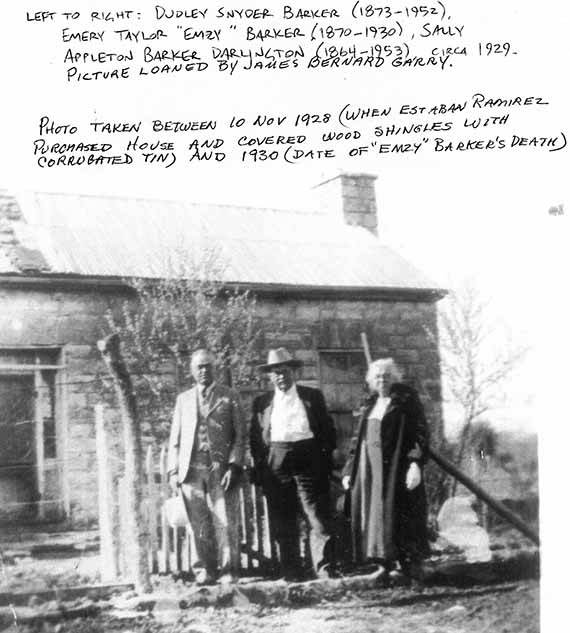 E. B. and Mary Harvey Barker bought this house of locally quarried limestone in May 1873. The barkers, who resided on a farm at rice's crossing (20 mi. e), lived here during the winter season so that their eight children could attend school in round rock. Their son, Dudley, became a noted Texas ranger; he returned to the house in 1940 to etch his birth date on an interior wall. as an intact example of a vernacular center-passage house, the dwelling is a vivid reminder of pioneer architecture.

Tucked away in a quiet corner of Round Rock is an old home that has stood virtually unchanged for decades. The Barker-Porter house is a fine example of a vanished time in local history and architecture. The house is significant not only for its architectural features but for the people who lived there. It is an important cultural resource worthy of historic designation.

The settlement that became Round Rock began to take shape in the 1840s.

Individual settlers along Brushy Creek began to duster around a unique limestone formation in the creek. This landmark served a useful purpose because it marked a fordable pass along the waterway; if the rock could not be seen, the water was too deep and swift to cross safely.

In time, the settlement could boast mills, limestone quarries, stagecoach stops, and churches, plus houses and stores.

A post office was secured in 1851, first named Brushy Creek, and changed to Round Rock three years later. Named for the limestone outcrop, the town was now officially on the map. [1]

Soon, Round Rock became known for its fine schools.

The first school in the county was a log cabin built in 1848, about a mile above the Rock. An 1863 state law prohibited the sale or transport of liquor within a four-mile radius of the school at Round Rock. In 1867 the Greenwood Masonic Institute was established, securing the town's place in the educational history of Texas. In its day, it became known as the finest school of higher education between the colleges at Salado and San Antonio. [2]

The town grew steadily as the years passed, increasing from a handful of families to a few hundred people over 20 years.

By this time, besides the underlying ranching and farming economy, this section of Williamson County became known for its schools and limestone quarries. It is from this era that we find an extant house, virtually frozen in time.

It is a center passage style stone house with one story. It is three rooms across and one room deep and faces north along an old road in Old Round Rock, which, like the house, has remained quiet and virtually unchanged over the years.

Tile center room measures 11 by 16 feet, while the two side rooms are 16 feet square in a hall-and-parlor arrangement.

There are exterior chimneys at both ends, approximately 16 feet high. The construction material throughout is locally quarried limestone, with blocks typically 12 by 15 inches on a face, about 16 inches deep. Cream-colored limestone is used throughout the house, including the exterior, interior and foundation material. The ashlar limestone faces are chiseled. The mortar extends out from the rock, which is a feature sometimes attributed to comparatively affluent families. [3]

The doors and windows are capped with segmental relieving arches of smaller limestone pieces.

The door jams appear to be original, as do the floors, which include square nails (these are also found in the ceilings, which feature cedar timbers). The wood sash windows are six over six panes. [4]

The home has a single-door primary entry with transom and sidelights.

A gable style rooftops gable end treatments that are the same limestone type as the wall surface. The corrugated tin roof with box eaves covers parts of the original cedar shingles. The stone fence in front was added in 1982, Made of stones from the grounds. The home is a good example of nineteenth-century stone vernacular architecture in Texas. It also ties in with the very history of the town. [5]

The land on which the house was built is a part of the Jacob Harrell survey, originally part of two tracts totaling 8 acres passed from father Jacob (1804-1853) to son Anderson J. Harrell (1823-1874). (Anderson served as county clerk and chief justice of Travis County in the 1840s and drowned in the Colorado River in 1874) On March 30, 1858, Anderson deeded a 4.65-acre tract to his sister Emma (born 1843), wife of John B. Napier, whom she married on February 24, 1858. J. B. was a merchant and the first secretary of Round Rock's Masonic Lodge, founded that same year. Emma, in turn, deeded the lot to John W. Ledbetter in Apr 1863. Ledbetter (1829-1890) was a Methodist circuit rider and left an indelible mark on Round Rock. He and much of his family stayed here for the rest of their lives. Ledbetter is the man for whom the street that passes the house is named (1113 Ledbetter). He was also the first of five generations to live in Round Rock, and he, his wife Fannie E. (1835-1918), and their son John W. Jr. (1864-1906) are buried in the historic Round Rock Cemetery, which itself is a few hundred yards from the house. The Reverend's grandson, J. W. (Wallace) Ledbetter III (1896-1968), owned the Alcove, a popular business, was president of the Old Settlers Association and served for many years as postmaster and as a school board member. [6]

A promissory note from Simonton to Nathan Harris (born 1849) in Jan 1873 is the first transaction to mention specifically the house on the lot, being a note for $369 in gold dollars, 2 1/2 % interest due in one year. Therefore the house was most probably built while the property was owned by J. R. Simonton. [7]

In 1873 E. B. brought his seven children and pregnant wife Mary to the house in Round Rock for the winter school term. The school lasted five or six months, during the off-season, for planting or harvesting crops. In September of that year, their son, Dudley, was born in the house. He grew up to become a noted Texas lawman.

Barker helped end the San Saba Mob War in 1897-92, dispersing the secret vigilante society that cost the lives of 43 men in that county over two years. In San Saba, Dudley met and married Lilly Campbell (1880-1964), and the two moved to West Texas. Dudley was sheriff of Pecos County for 24 years and has been called "the Real Law West of the Pecos." He amassed a legend as a no-nonsense lawman who shot first (with deadly accuracy) and asked questions later. The best chronicling of Dud Barker's career comes from Olan George's book, Roundup of Memories. After his term as sheriff, Barker became a rancher in Sanderson and Alpine. In 1928, at the age of 55, he enlisted as a Special Ranger serving the local cattlemen, serving without compensation until 1933. His 32 years in law enforcement helped to civilize the state. On his 67th birthday, Dudley returned to his birthplace and childhood home, leaving a note to that effect on an interior wall. The autograph is still visible: [9]

In 1880, E. B. Barker sold the house to Dr. Redding Vandergriff, a practicing physician whose family included his wife Evaline and children Ella and Redding J. A. Jr. Further transactions through the years included:

By 1942, the property was vacant and remained so until 1970, when Dr. Jim and Betty Porter bought the house from the heirs of Davis and proceeded to stabilize and restore the structure.

Betty Porter has been presented the Local Legend award by the Round Rock city council and Historic Preservation Commission.

She directed the Sesquicentennial musical drama "We're All Texans Now" and the Sam Bass Shootout for Frontier Days for 20 years. When she came to Texas in 1952, Mrs. Porter discovered she had three branches of her family tree from early Texas: the Breedings, who came in 1832, the O'Bars from 1837, and the Sharps from 1844.

Upon moving to Round Rock in December 1967, Betty and Dr. Porter lived at the St. Charles Hotel on Chisholm Trail.

After inspecting several properties for possible restoration, the couple chose the structure now referred to as the Barker-Porter home. Though the house is close to the old road to Bagdad and Burnet, at that time, it was barely visible because of unbelievably thick brush, weeds, and vines.

The native limestone of the house reflects the natural beauty of the environment and the skill of the early artisans.

Restoration work continued for many months. The nearly collapsed wood-framed kitchen and porch area attached to the basic structure was enclosed for living space. It was built with 1" x 14" lumber from an old house in downtown Round Rock. The cistern by the house is in remarkably good shape. Few examples of these old rock cisterns remain in the area, and this one is in excellent condition.

On the southwest corner of the grounds can be found the remnants of an old outhouse, covered with wooden shingles.

Also, near the house and partly covered with vines of ivy is an old millstone from a long-forgotten mill on Brushy Creek. To this day, bits and pieces of pottery, arrowheads, cups, and utensils dot the surface after hard rains saturate the property. [11]

This home, a fine and uncompromised example of local historic architecture, is one of the best-preserved structures in Round Rock.

And beyond its architectural value, the home reflects the citizens who have lived there over the decades. The history of the house is interwoven with the very fabric of the Round Rock.

Researched and written by:

view other Round Rock Historical Markers