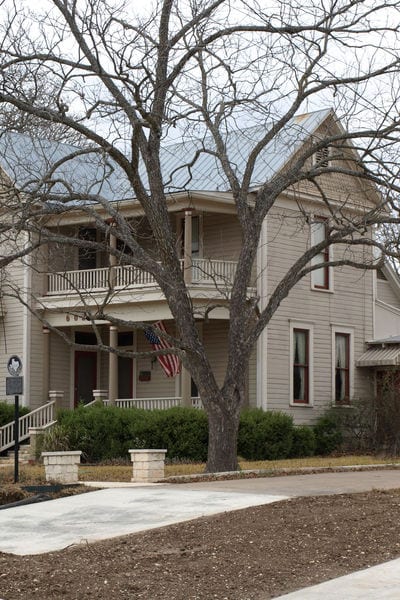 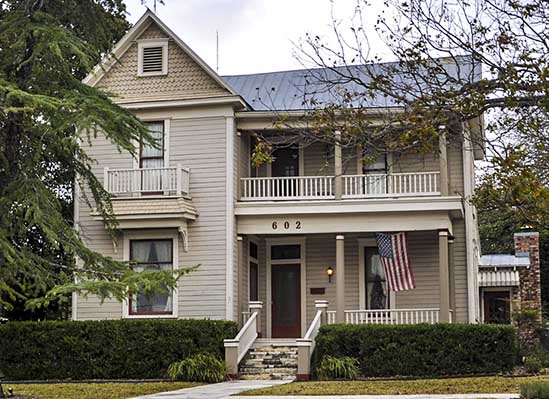 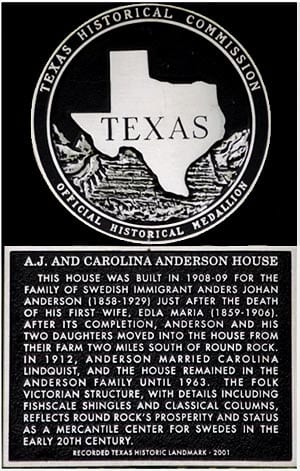 Marker Text
This house was built in 1908-09 for the family of Swedish immigrant Anders Johan Anderson (1858-1929) just after the death of his first wife, Edla Maria (1859-1906). After its completion, Anderson and his two daughters moved into the house from their farm two miles south of Round Rock. In 1912, Anderson married Carolina Lindquist, and the house remained in the Anderson family until 1963. The Folk Victorian structure, with details including fishscale shingles and classical columns, reflects Round Rock's prosperity and status as a mercantile center for Swedes in the early 20th century. Recorded Texas Historic Landmark - 2001.

On East Liberty Avenue in Round Rock, there is a fine example of a Queen Anne-style home of the 1900s, a testament to a decade of economic success in a small Texas town. In the first decade of the twentieth century, Round Rock was quite progressive for a small agricultural town. Although the population was just over 1,100, new industries contributed to a diversified economy. Both the Round Rock Broom Factory and the Round Rock White Lime Company received gold medals for their products at the 1904 World's Fair in St. Louis. Trinity College opened in 1906, complimenting the educational advantages offered by the Round Rock Institute (1). Downtown businesses included three cotton gins, a creamery, and even a skating rink. Scott describes Round Rock in this era as the mercantile center for Williamson County Swedes, more so than Georgetown (2). Many grand homes were built in the town during this period. One such example is the house still standing at the northeast corner of Liberty and Stone.

The house was built for Anders Johan Anderson, a farmer whose land was two miles south of Round Rock, near the present intersection of Interstate 35 and FM 1325.

A. J. was born in 1858 in Forserum, in the Smaland district of Sweden. He was the son of Anders Johanneson and Hedvig Jonasdotter, who were farmers in Sweden (3). He came to the United States in 1878 and was a naturalized citizen by 1910 (4). A. J.'s farm south of town consisted of two parcels, 246 and 62 acres in area (5). In December of 1885, he married Edla Maria Anderson, who was born in 1859 in Barkeryd parish, Sweden (6). She was the daughter of Sven Anderson and Anna Mathilda Johanneson, who was born in Barkeryd parish and emigrated to Round Rock in 1869-1870 (7). Forserum and the Barkeryd parish supplied the greatest number of Swedish immigrants to Texas (8).

They lived on their farm south of town, and both girls attended the Round Rock Institute, near the present intersection of Interstate 35 and FM 620 (9). The girls later attended Trinity College (10).

By 1904 the Andersons intended to build a house in town.

A. J. joined with Johan Emil Gustafson (1861-1927) to buy the parcel from the New York and Texas Land Company Ltd. In October 1904, they bought Lot 3 of Block 40 (the corner lot) for $75, and in January 1905, they purchased Lot 2 for $50 (11). Gustafson worked for J. A. Nelson Bank and Hardware, who, in all likelihood, built the house and financed its construction (12). In 1884 Gustafson also married Edla Maria's sister, Anna Christina Anderson (13). The property is in Block 40 of the original plat for the town of Round Rock, filed in 1876. It was at the northern limit of the city, with the land from there north to Brushy Creek being used in the fall to stack cotton bales awaiting shipment to market (14).

In May 1906, J. E. Gustafson and A. J. Anderson took the train to New York and then traveled the White Star Line Cedric to Liverpool and on to Sweden to visit their families. Gustafson was attending the wedding of his youngest sister, whom he had never met as she was born after he came to the United States (15).

In November 1906, Edla passed away in Manor and was buried at Palm Valley Lutheran Church. She had undergone an operation earlier in the week and died at age 47, leaving behind her husband and two daughters (ages 11 and 13). The newspaper described the funeral as one of the largest ever seen in the area (16).

The house is an example of the Queen Anne style, built in the two-story L-plan.

Its identifying features include an asymmetrical facade, cross-gabled roof, textured fish-scale shingle decoration in the gables, horizontal siding, and a partial double-deck porch (19). Porch supports are in the free classic style, and windows are tall single-pane sashes. The porch and window overhang detail feature squared-wood balusters. The roof material is galvanized metal (20).

It has a pier and beam foundation and frame construction apparently of southern pine lumber. There are two entrances onto the front porch, one from each ell. Both doors have transoms without sidelights. The first-story window on the south gable is topped by an overhang, with a small hipped roof projecting from the wall. It has a flat top and acts as a balcony for the second-story gable end window. The hipped roof is supported by jig-sawn brackets to the wall (21).

The Queen Arne style was created in 1874 and was spread by popular pattern books and the expansion of the railroad network across the country.

The arrival of the International and Great Northern railroad in Round Rock in 1876 introduced a more varied architecture to the once-vernacular village. This house was built in one of the last of the styles, as Queen Anne was supplanted by Colonial Revival and other styles by 1910 (22).

Evelyn married Knut Wilhelm Johnson in 1922, with Dr. J. A. Stamline performing the ceremony. Stamline was a former president of Trinity College and had also married J. E. and Anna Gustafson in 1884 (29). The Johnsons lived on a farm near Hutto. They were both graduates of Trinity College, Evelyn from the Academy in 1913 and K. W. from the School of Business the following year (30). During the Great War, K. W. was a private in the 493rd Motor Truck Company of the Allied Expeditionary Force (31).

K. W. passed away in 1963, and in the following year, Evelyn Anderson Johnson sold the property to Ruben and Ora Nord.

The Nords sold off Lot 2 that same year and lived in the house on Lot 3 until 1975, when they sold it to their grandson Charles Morris (34).

Mr. Nord rebuilt the falling roof, installed new window glass, and refinished interior woodwork. An old one-story garage was enclosed for use as a living space (35). Kent Macaulay bought the house from Morris in 1977 (36). Kent and Ellen Macaulay restored the interior, including the removal of non-original carpeting. They also added a new garage and additional rooms to the rear of the house. In 1993 the home was designated a Round Rock historic landmark (37). Today the Macaulays still maintain the beauty and the historical integrity of this fine house on Liberty Street. It represents a significant style and period of construction in the history of Round Rock.