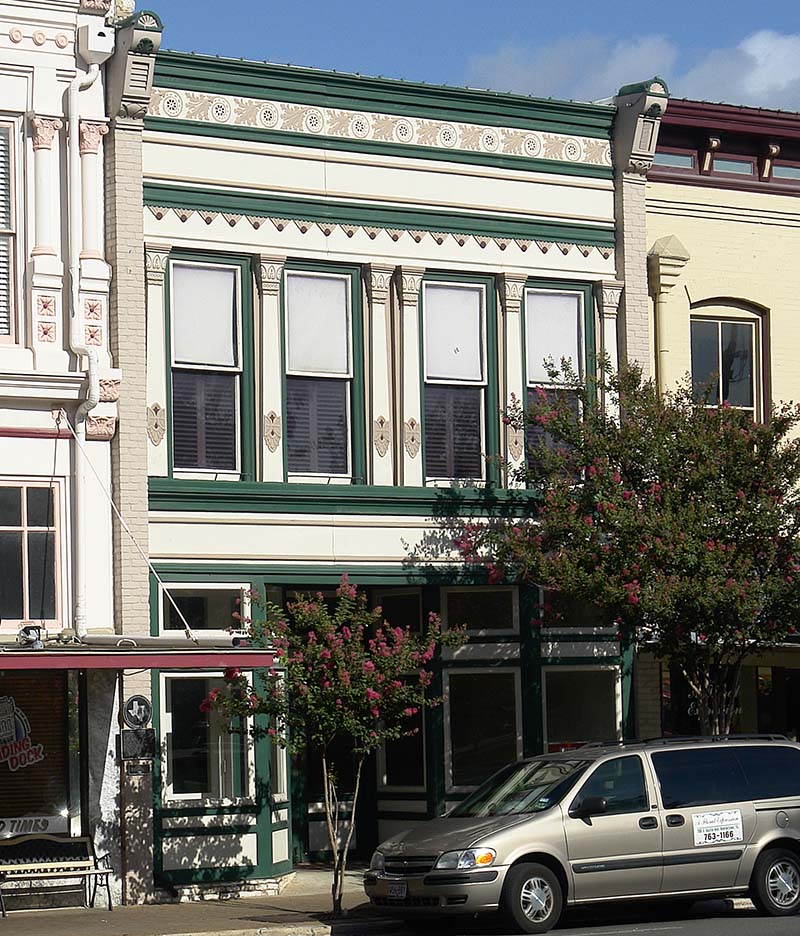 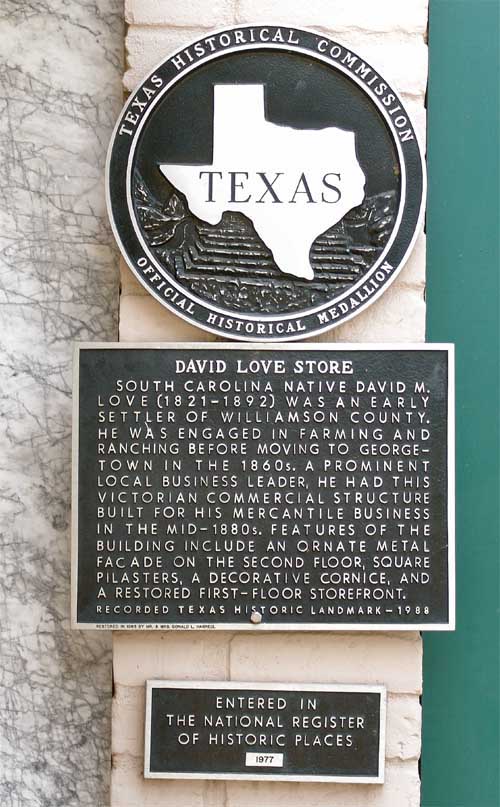 South Carolina native David M. Love (1821-1892) was an early settler of Williamson County. He was engaged in farming and ranching before moving to Georgetown in the 1860s. A prominent local business leader, he had this Victorian commercial structure built for his mercantile business in the mid-1880s. Features of the building include an ornate metal façade on the second floor, square pilasters, a decorative cornice, and a restored first-floor storefront.

Within the first fifty years of its existence, Georgetown developed into an important center of agriculture, commerce, education, and government. It was in the half-century from 1848 to 1898 that the town was founded, named the seat of government for Williamson County, and selected as the site of an important Methodist university. During that time, significant developments were also made in business with steady increases in agricultural production, the establishment of numerous stores and industries, and the construction of a rail line. Although countless people contributed to the early growth of Georgetown, few figured as prominently in the evolution as David M. Love (1821-1892).

A native of South Carolina, David Love was in Texas by 1848, when he signed the petition to create a new county from the western portion of Milam County.

Although the petition suggested the name Clear Water (a change from an earlier suggestion of San Gabriel), the new county formed that year was named in honor of the Texas patriot Robert McAlpin "Three-Legged Willie" Williamson. The settlement of Georgetown, named for the town-site donor George Washington Glasscock, became the county seat. [1]

David Love's military background, if there is one, remains an unknown part of his history.

Initially, it was believed he might have participated in the Texas Revolution, despite what would have been his young age at the time. Subsequent research, however, shows that he was not the David Love mentioned in official records of the war (the veteran of the revolution, who donated land for the town-site of Fairfield in Freestone County, died in 1866. [2] There was also a man by the same name who participated in the Mexican War, 1846-1848. In Charles D. Spurlin's book Texas Veterans in the Mexican War, there is a reference to a David Love who served in Company K, "composed of personnel recruited primarily at Austin, Texas," but a review of National Archives papers reveals no further information. [3]

There is evidence, although inconclusive, that Love served in some military capacity (probably home guard) during the Civil War.

In 1867, during Reconstruction, General J. J. Reynolds appointed him as a commissioner of Williamson County. [4] He resigned the position two years later, citing his association with recent Southern war efforts as a reason. In a letter to the Texas Secretary of State, he noted:

The undersigned tenders his resignation of the office of County Commissioner of Williamson County and desires this resignation be forwarded to the proper authority for the reason that on one occasion during the war, my name was nom. as a candidate for the office of Lieutenant of a militia company. . . [5]

Several later phrases in the document are illegible, but there is mention of the "Test Oath."

The reference probably relates to the loyalty oath, which was administered in May 1869, and which coincides with Love's resignation. [6]

David Love farmed and ranched in Williamson County before settling in Georgetown, where he was a merchant.

By the late 1860s, he had constructed a large, two-story home for his family at the corner of Church and Tenth (then Orange). The home was later owned by Jessie Daniel Ames, the noted suffragette and anti-lynching advocate. [8] Also, in the late 1860s, Love purchased property on the west side of the courthouse square, where he later constructed a two-story stone structure for his mercantile business. An exact date of construction has not been determined from deed and tax records, but reference to the building is first noted in an 1884 warranty deed related to an adjoining building.[9] The structure appears on the 1885 Sanborn map, the earliest map available in the local collection.[10]

The David Love Store is a classic example of Victorian commercial architecture.

It is a two-story stone building with an ornate metal facade on the second floor. Detailing of the four-bay second floor includes one over one double-hung window, squared pilasters, and a floral design in the frieze. The cornice above the frieze exhibits more classical lines. The structure was originally capped by a metal parapet that has since been removed. The ground floor features a central recessed double-door entry, display windows, and transoms. The building is outlined on either side by brick piers capped by heavy consoles. Elements of the rear elevation include round-arched windows on the ground floor and segmental-arched windows on the second floor.

Until his death in 1992, David Love remained an influential business leader in Georgetown.

In 1978, he joined other businessmen in funding and organizing the Georgetown Railroad Company. With him in the effort were Moses Steele, J. J. Dimmitt, Emzy Taylor, Thomas P. Hughes, J. L. Rucker, and Duncan G. Smith. The tap line, which connected the city with the International and Great Northern line at Round Rock, was heralded as "speaking the promise of new enterprises, cheaper transportation and a forward movement in every business." [11] Among those businesses that prospered was the mercantile establishment of David Love.

He eventually joined in partnership with his son-in-law F. R. Scott, but Scott left the firm in 1090, and Love again became sole proprietor.

Although the 1900 Sanborn map lists it as "vacant," the maps for 1894 and 1904 show it occupied by a mercantile.[12] A 1904 issue of the Georgetown Commercial contains an advertisement that shows the A. F. Dietze dry goods and clothing store located in the Love building. [13] The Sanborn map for l905 shows the building housed a grocery, and maps from 1910 and 1916 show it as hay, grain, and feed store. [14]

In 1983, the David Love Store was restored by owners Eugenia and Donald Harrell.

Interior renovation on the ground floor provided space for several businesses (stores within a store) that sell such items as antiques, folk art, collectibles, and special gifts. The second-floor area has been divided into office space and apartments.

The David Love Store is an important landmark in Georgetown's historic town square.

Listed on the National Register of Historic Places, it has contributed significantly to the city's Main Street project and other downtown revitalization efforts. Its prominent location, elaborate design, and creative utilization have influenced other local preservation projects. In addition, the building's signage perpetuates the memory of a man who made lasting contributions to the quality of life in Georgetown.